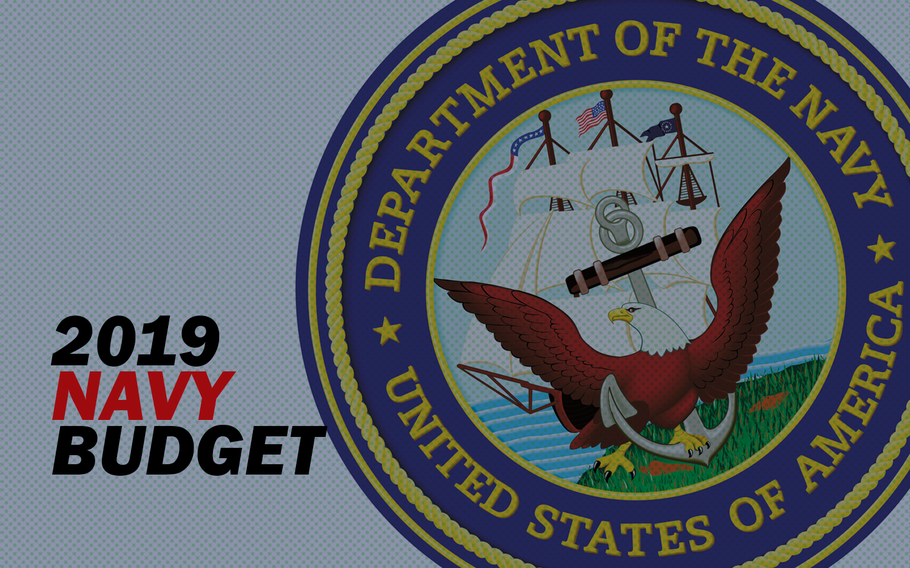 WASHINGTON — After playing two years of readiness catch-up, the Navy wants to expand its strength and fighting capabilities in fiscal year 2019 to meet the demand for a “more lethal, resilient and agile force,” the Navy said in the presidential budget request released to Congress on Monday.

Procurement has the sharpest rise at more than $8 billion, and personnel costs are up by over $2 billion. The request will allow the Navy to build 10 warships and eight support vessels to bring the ship count to 299; add 7,500 active duty personnel to reach 335,400; and add 120 new manned and unmanned aircraft.

The budget request includes a five-year growth projection, with Navy active duty manpower climbing to 344,800 by 2023; construction of 111 vessels including 54 warships; and 655 new aircraft.

Rear Adm. Brian Luther, deputy assistant secretary of the Navy for budget, described the demands on America’s sea services around the globe as laid out in the new National Defense Strategy. The Navy and Marine Corps are being called upon to meet an “increasingly complex security environment” fraught with growing competition, particularly in the maritime domain, where shipping traffic represents 90 percent of global trade, he said Monday.

Luther described the emergence of great power competitors and unconventional forces, state and non-state actors and humanitarian demands on the Navy like the triple punch of Hurricanes Harvey, Irma and Maria last fall.

Luther showed a map of the world with hundreds of lines depicting international undersea cables that carry 99 percent of international data transmissions; natural and oil resources dotting shores and waterways; global shipping channels and emerging lanes where ice caps are melting; international conflict zones or hot spots; and military bases. “Trade, information resources and free access to all are critically important to the continued prosperity of the global economy,” he said.

Under the 2019 budget, the Navy says it can sustain 11 aircraft carriers and 33 large amphibious ships that serve as the fleet’s foundation. It will take possession of two nuclear attack submarines, four littoral combat ships, one expeditionary fast transport ship, one expeditionary sea base, one amphibious assault ship and two destroyers. One nuclear attack submarine will be retired.

The request for $21.9 billion for shipbuilding includes funding for two Virginia class submarines, one of which will include the modernized Virginia Payload Module missile launch tubes; three DDG 51 Arleigh Burke destroyers that will include air and missile defense radar; two oilers; an expeditionary sea base; and a towing, salvage and rescue ship. It also includes the procurement of the last littoral combat ship, and will serve as a bridge to sustain private shipbuilders until the Navy can begin construction of its replacement, the FFG(X) frigate, Luther said Monday.

The budget proposes $19.1 billion for aircraft acquisition that includes more than $11.7 billion for combat aircraft. The request more than doubles the number of F-35C aircraft for carriers, going from four in 2018 to nine in the 2019 request.

With the Navy’s fleet of F/A-18A-D Hornets reaching the end of its service life before the Navy can acquire sufficient F-35 Joint Strike Fighters, the 2019 budget seeks 24 F/A-18E/F Super Hornets to tide the Navy over, for nearly $2 billion. The Navy plans to add 97 F-35Cs and 101 F-35Bs over five years.