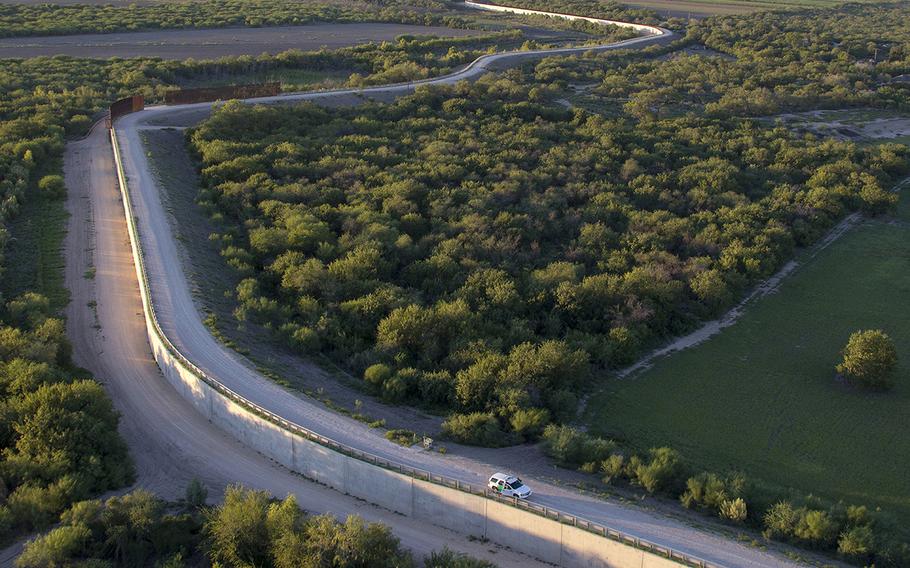 A United States Border Patrol vehicle patrols on watch at a border fence along the a South Texas border in the Rio Grande Valley. The National Guard posted to the Mexico border will provide added aviation surveillance, the commissioner of Customs and Border Protection told Congress on Thursday, April 12, 2018. Photographer: Donna Burton (U.S. Customs and Border Protection)

WASHINGTON — A primary role of the National Guard posted to the Mexico border will be to provide added aerial surveillance, the commissioner of Customs and Border Protection told Congress on Thursday.

Speaking at a hearing of the House Appropriations Subcommittee on Homeland Security, Kevin McAleenan said that the Guard can provide assets that are in short supply in his law enforcement agency.

“What the National Guard is going to do is bring significant aviation assets that can close our gap for that surveillance piece at the immediate border,” McAleenan said. “It is supportive but it also tells us what’s crossing so we can interdict.”

The three-hour hearing focused mostly on the budget and assets needed for border security, but a few of the Congressmen did take the opportunity to stress their positions about the use of military forces at the border.

Rep. Nita Lowey of New York, ranking Democrat on the House Appropriations Committee, talked about how Democrats disagree with President Donald Trump’s “politization of border security” and questioned the efficacy of deploying the National Guard.

“The deployment of the National Guard is yet another misguided and impulsive decision the department (Homeland Security) is being forced to justify while other national security priorities are being stretched thin,” Lowey said. “This budget request does not reflect the serious nature of the threats we face.”

On the flip side, Rep. Steven Palazzo, R.-Miss., said that as a member of the Mississippi National Guard and chairman of the National Guard Caucus, he believes the forces could add exponential value. Palazzo said he participated in a joint task force mission on the border in the 1990s doing surveillance and thought he contributed information that helped in border protection.

“I think the National Guard is going to be a huge multiplying force for your agency and securing the border,” he said. “They are great for plug and play. So be creative how you use them.”