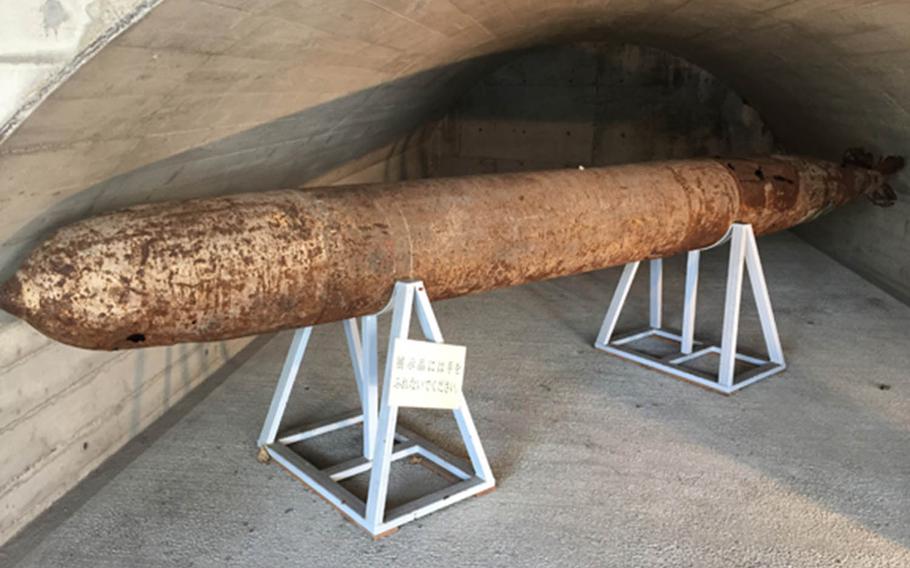 A torpedo on display at Nagasaki City’s Mitsubishi Sumiyoshi Tunnel Arms Factory, which manufactured aircraft torpedoes in the final days of World War II and was witness to the horrors of the atomic bombing on Aug. 9. 1945. (Matt Burke/Stars and Stripes)

A torpedo on display at Nagasaki City’s Mitsubishi Sumiyoshi Tunnel Arms Factory, which manufactured aircraft torpedoes in the final days of World War II and was witness to the horrors of the atomic bombing on Aug. 9. 1945. (Matt Burke/Stars and Stripes) Nagasaki City’s Mitsubishi Sumiyoshi Tunnel Arms Factory manufactured aircraft torpedoes in the final days of World War II and was witness to the horrors of the atomic bombing on Aug. 9. 1945. (Matt Burke/Stars and Stripes) Nagasaki City’s Mitsubishi Sumiyoshi Tunnel Arms Factory manufactured aircraft torpedoes in the final days of World War II and was witness to the horrors of the atomic bombing on Aug. 9. 1945. (Matt Burke/Stars and Stripes)

History can be found anywhere if one looks close enough — including under the road you’re driving on.

Located about a mile from Nagasaki Peace Park, which was ground zero for the second atomic bomb ever used in combat, the tunnel arms factory sits almost completely obscured underneath the overpassing roadway. It remains an ominous aide-memoire.

I visited the tunnels on a sunny day in March. I parked at a convenience store and descended a nearby flight of stairs.

Peering inside, one could see the bare rock that witnessed unimaginable horrors. A heavily rusted torpedo that looked like it was found inside was also on display. I was left in awe of what had happened at the site and how much things have changed in the intervening years.

The tunnels, which were commissioned in August 1944, served as a hidden backup for Mitsubishi Heavy Industries’ Ohashi Arms Factory, which was located about a half-mile away and specialized in the around-the-clock production of aircraft torpedoes.

The site was designed to feature six parallel tunnels that would connect Sumiyoshi with Akasako under the mountain, according to literature provided by Nagasaki City officials. Factory equipment was moved in as portions of the tunnels were completed to escape intensifying air raids from the U.S. military.

By the end of the war, only two tunnels were in operation and the others remained incomplete.

In Tunnel 1, the mostly teenaged volunteers and draftees produced torpedo body and rudder parts and polished joints. The precision department in Tunnel 2 manufactured the propellers, rudders and motion stabilization parts. The parts were transported to the Ohashi factory where about 80 torpedoes were assembled per month.

Conditions were tough, and a Japanese navy major general was assigned to patrol the floor during the three shifts to ensure the strictest of disciplinary standards were being observed.

Both factory workers and the tunnel construction labor force, which consisted primarily of enslaved Koreans, lived onsite just outside of the tunnels.

On the morning of Aug. 9, 1945, when an atomic bomb detonated over nearby Matsuyama area, approximately 1,800 personnel and 1,000 Korean construction workers were working on site at Sumiyoshi. The detonation either killed or severely burned anyone caught outside.

“Suddenly the tunnel was filled with a pale blue light, and there was a loud noise followed by a blast wave, and then the lights went out,” one worker recounted, according to the display outside the factory today. “Rock fragments came raining down from the roof of the tunnel. The zinc roofing that was put up to prevent dripping came down with a clatter.”

Immediately after the blast, those working inside ran out to aid the injured.

“I groped my way out of the tunnel on my hands and knees to find all the surrounding thatch-roof farmhouses ablaze with a fearsome roar,” the eyewitness recalled. “Those who had been working outside the tunnel had either been killed, smashed into the machinery by the force of the blast or had been injured by flying objects.”

The tunnels became a refuge and were soon packed with the injured — some with limbs blown away, internal organs exposed, bodies covered with burns and blisters and some with broken or loose skin hanging off their frames.

Medicines were scarce and many died inside the tunnels, pleading for water. The day after the bombing, the tunnels were converted into an emergency facility by the Japanese navy.

After two or three days of rescues and adminstering first aid, the workers were finally able to leave the tunnels and head home.

The tunnels were permanently abandoned shortly after.

Today, city officials said the tunnels serve as a monument to peace and a symbol of the renunciation of war and the elimination of nuclear weapons. As such, efforts to preserve and reinforce the tunnels have been made, and visitors to the site can view the exterior of the tunnels at any time. Visitors wishing to enter the tunnels can contact the Nagasaki Bomb Museum for more information.

There isn’t much to the tunnels, so I recommend visiting as part of a more comprehensive tour of Nagasaki’s historical sites. However, the site is sort of an oddity, a place where rather than destroy history, the decision was made to preserve and drive right over it.

Want to go?Directions: 18 Sumiyoshimachi, Nagasaki-shi, Nagasaki-ken 852-8154Times: The arms factory can be viewed through metal bars at any time. For those wishing to enter, one must contact the Nagasaki Atomic Bomb Museum. The site is rigged with motion sensor lights so it can be viewed even at night.Costs: FreeFood: There is a Daily Yamazaki convenience store about 25 yards from the site.Information: 095-844-3913; http://nagasakipeace.jp/japanese/abm/insti/6.html