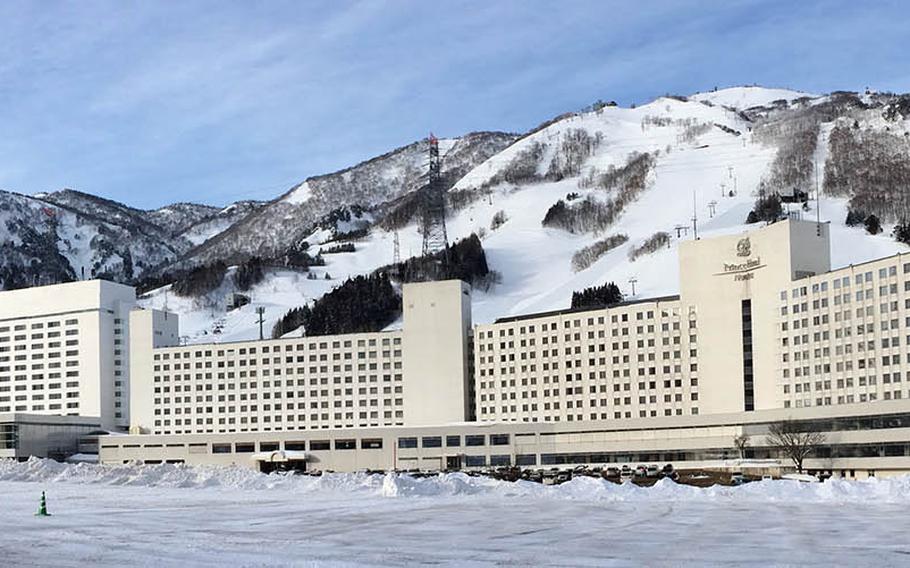 The Naeba Prince hotel in Niigata Prefecture is a huge facility filled with shops, restaurants, heated baths and amusements next to one of the largest ski areas in Japan. (Seth Robson/Stars and Stripes)

The Naeba Prince hotel in Niigata Prefecture is a huge facility filled with shops, restaurants, heated baths and amusements next to one of the largest ski areas in Japan. (Seth Robson/Stars and Stripes) 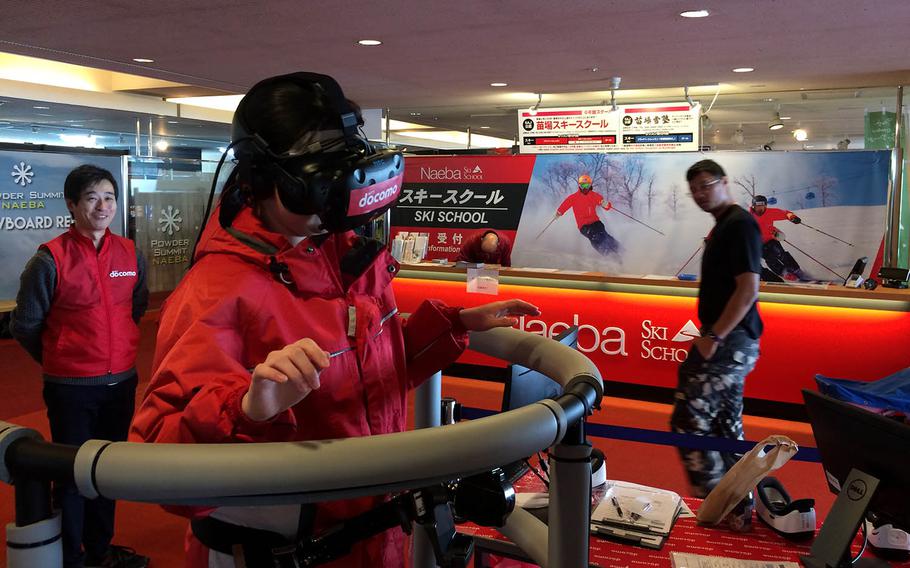 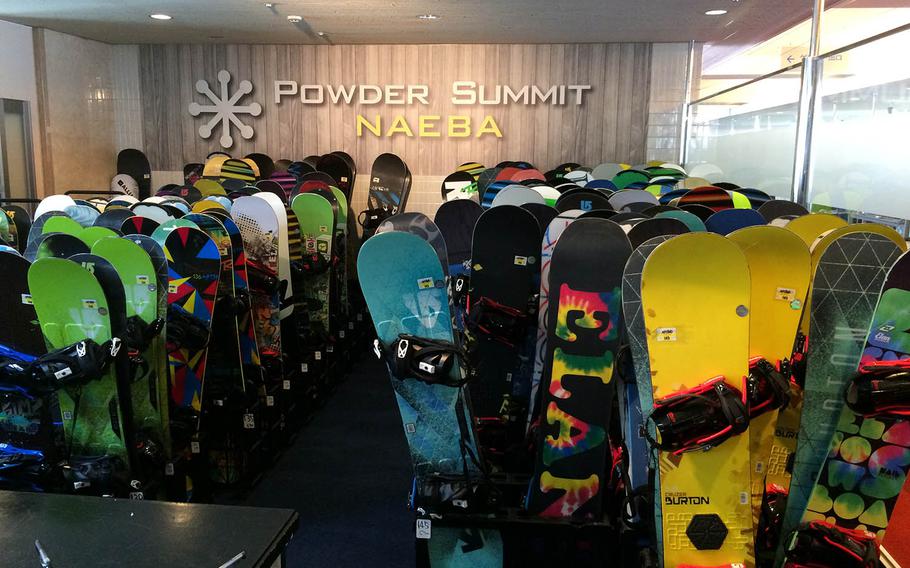 Ski and snowboard gear is available for rental at Naeba Prince Hotel in Niigata Prefecture, Japan. (Seth Robson/Stars and Stripes;) 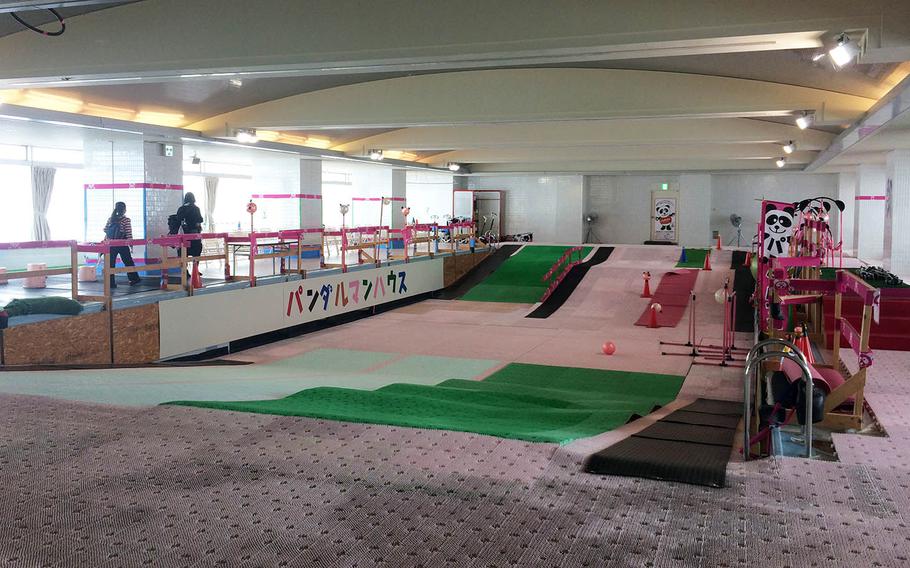 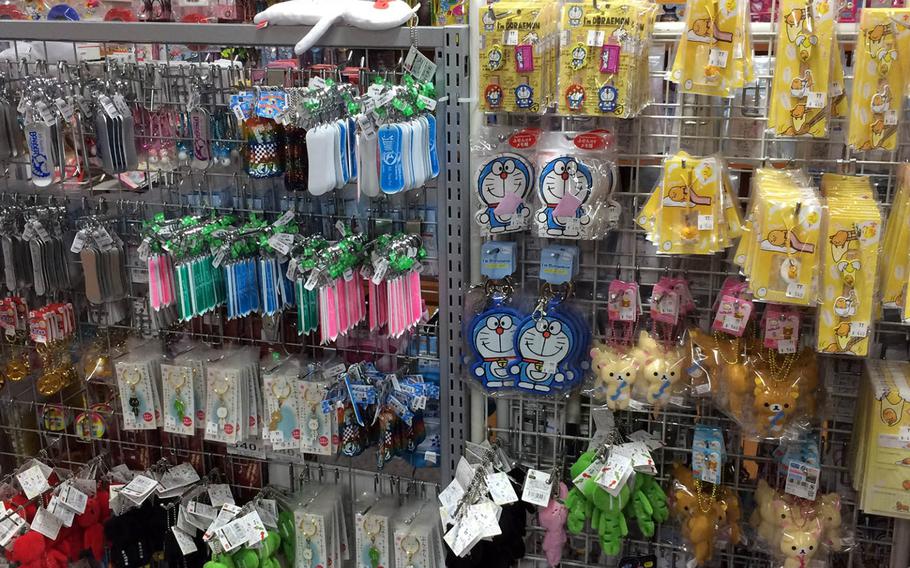 Japanese souvenirs are for sale at a shop inside Naeba Prince Hotel in Niigata Prefecture, Japan. (Seth Robson/Stars and Stripes) 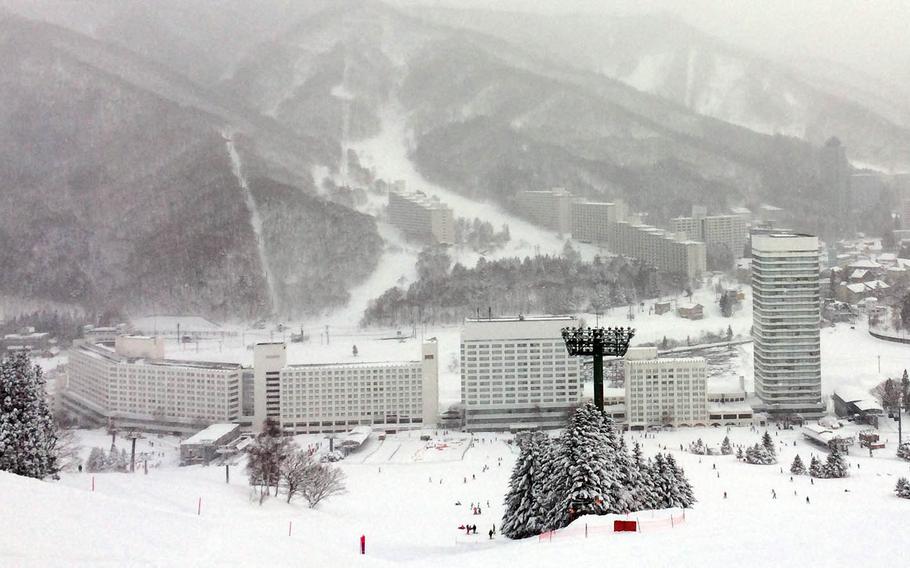 Naeba Prince Hotel in Niigata Prefecture is a huge facility filled with shops, restaurants, heated baths and amusements next to one of the largest ski areas in Japan. (Seth Robson/Stars and Stripes)

At Naeba Prince Hotel — nestled in Japan’s third-largest ski area about two and a half hours northwest of Tokyo — it’s easy to imagine you’re inside a massive cruise liner that’s run aground at the foot of a dormant volcano.

This 1,299-room hotel seems about as long and wide as a pleasure ship when you’re wandering its halls, which seem to go on forever.

In fact, the Naeba Prince Hotel comprises a half-dozen buildings, including a glittering glass tower that looks a little out of place amid Niigata’s stunning mountain scenery.

Inside, there are 20 restaurants serving everything from sushi to pizza. There are also bars and convenience stores, two onsens and numerous ski-rental shops where you can check out gear to use on the lifts outside.

The place has fantastic views of 7,037-foot Mount Naeba, a volcano that’s been inactive for 200,000 years. It’s home to Naeba Ski Area and one of the “hyakumeizan” — Japan’s 100 famous mountains.

Spending a night here during the peak winter season doesn’t come cheap, and it’s recommended that travelers book well in advance. A three-person room was priced at more than 35,000 yen, or about $320, for a weeknight in February.

Fortunately, the resort is a good option for day-trippers. Driving to Naeba from Tokyo is relatively simple. The Kanetsu Expressway will take you most of the way, but the last section of road traverses a hillside and is often covered in snow and ice in winter, meaning snow tires or chains are required.

Along the way you might catch sight of snow monkeys scavenging for food on the roadside.

There are parking lots at either end of the complex, but you’ll probably need to hike 100 yards or more to get where you’re going.

Naeba is a great place to bring small children or people learning to ski or snowboard because there’s a wide expanse of low-gradient slopes right next to the hotel.

There’s a snow playground and a “magic carpet” conveyor belt-style lift that youngsters can ride while they’re learning to shred. Once they get more confident, there are a half-dozen chairlifts in front of the hotel leading to forgiving terrain. There’s even a series of small jumps where they can get some air.

If you want to get closer to Naeba’s summit, there are a couple of huge gondolas that you can ride from right in front of the hotel. You can also grab some lunch or coffee and check out the view from an Austrian-style restaurant.

Those into exploring can ride the “Dragondola” lift over to the nearby Kagura Ski Area, although it requires a slightly more expensive lift ticket.

When the weather turns bad or energy levels drop, it’s easy to take shelter behind the hotel’s glass windows.

A large room in one of the buildings contains an artificial-turf ski practice area where very young children can ride down small ramps and plenty of other indoor amusements such as an arts and crafts room where kids can make their own souvenirs.

On the day I visited, they even had free virtual-reality skiing, although I skipped it in favor of the real thing.

There are plenty of Japanese guests at the Naeba Prince, but many of the people there are Chinese. You won’t see as many Westerners as you do in a place like Hakuba, but English-speaking ski instructors are available.

A large restaurant at the hotel called the Edelweiss offers energy-rich options for lunch, such as pizza, or waffles with lashings of whipped cream. Lunch won’t cost much more than 1,000 yen ($9.10).

There’s also a large food court at one end of the building with vendors selling everything from coffee and crepes to Japanese food.

At the end of a hard day on the slopes, the perfect medicine for bumps and bruises is a soak in a hot spring. Visitors who aren’t staying at the hotel can use the onsen next to the food court for about $5. It’s a great feeling to sit in hot water and watch the light fade from the nearby snow-covered mountainside at the end of the day.

DIRECTIONS: From Tokyo, take the Kanetsu Expressway to the Tsukiyono Interchange exit, then follow Route 17 for 18 miles to Naeba.

TIMES: Lifts open in the morning and run until 8.30 p.m., although you’ll need a night-skiing pass to ski after 5 p.m.

COSTS: Adult lift passes are 5,000 yen during peak season; schoolchildren passes are 4,000 yen, and young children can ride for free. Booking a two- to three-person room in February will cost about 35,000 yen.

FOOD: Twenty on-site restaurants range from a Japanese sushi shop to a pizzeria and a food court.