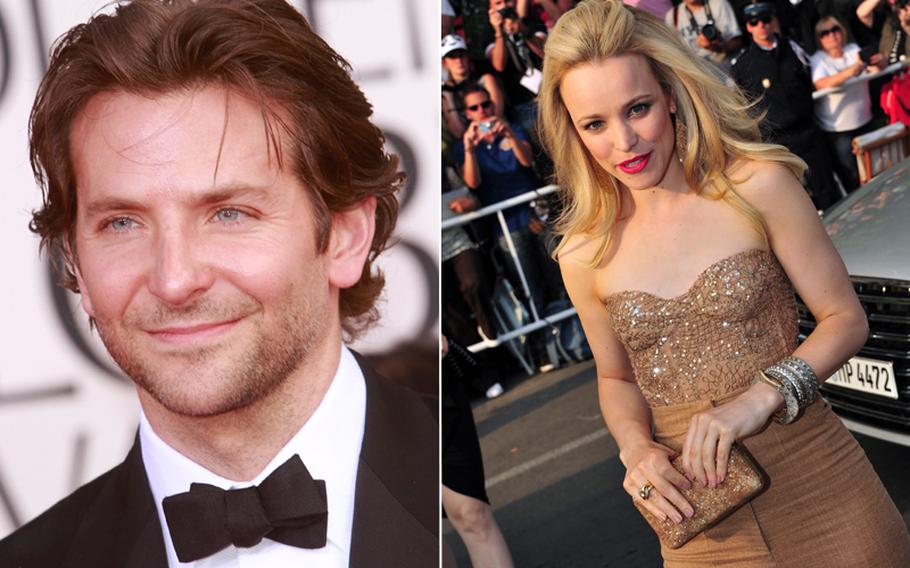 Bradley Cooper and Rachel McAdams. The Pentagon’s Joint POW/MIA Accounting Command found time earlier in November 2013 to allow a Hollywood movie to shoot scenes for a movie starring the pair, according to a report on MSNBC. (Photos by Kirk McKoy and Hahn-Nebinger-Genin/MCT)

Already getting bad press for faked public ceremonies and delays in identifying the remains of American servicemen, the Honolulu-based lab associated with the Pentagon’s Joint POW/MIA Accounting Command found time earlier this month to allow a Hollywood movie to shoot scenes for a movie starring Bradley Cooper and Rachel McAdams, according to a report on NBCNews.com

The movie company used Building 45 at Joint Base Pearl Harbor-Hickam in Honolulu, shooting for one day in a secure lab where the remains of possible Americans killed in action are analyzed. The lab stores about 1,000 cardboard boxes of remains awaiting identification.

The movie shoot “had no negative impact in execution of the lab’s primary mission,” a Pentagon spokeswoman, Cmdr. Amy Derrick-Frost told NBCNews.com. “One small area of the facility was used for the one-day shoot. JPAC scientists were fully capable of continuing their very important mission of identifying unaccounted-for servicemembers from our nation’s past conflicts.”

Although the glass-walled room usually has remains laid out on the tables, Derrick-Frost said that no human remains were shown on camera, and prop bones used as training aids will be shown in the movie. Although two lab technicians appear in the movie with speaking roles, these government employees were off duty or on leave, she said.

In the movie — still unnamed but earlier known as “Deep Tiki” — McAdams plays an anthropologist working in the lab. Cooper plays a military contractor in Hawaii to oversee a weapons satellite launch. The cast also includes Emma Stone, Alec Baldwin, Bill Murray, and John Krasinski. The writer/director is Cameron Crowe, known for “Jerry Maguire” and “Fast Times at Ridgemont High.”

Citing a casting call for extras, nbcnews.com reported that the plot involves Cooper reconnecting with a long lost love, played by McAdams. But Cooper falls for his military overseer, played by Emma Stone. Then Cooper and Stone’s characters team up to scuttle the launch of the satellite, “while dealing with mystical island forces.”

Several investigations of JPAC are under way in Congress and inside the Pentagon. An internal report called the agency “acutely dysfunctional,” and a Government Accountability Office report said the effort to identify missing and unknown service men and women has been undermined by squabbling between agencies.

The JPAC lab was used as a set at least once previously. An episode of “Hawaii Five-0,” the remake of the original TV series, was shot there in 2011.

NBCNews.com reported Derrick-Frost as saying the movie’s portrayal will be respectful of the mission.

CORRECTION: A previous version of this article incorrectly attributed the story to MSNBC instead of nbcnews.com.