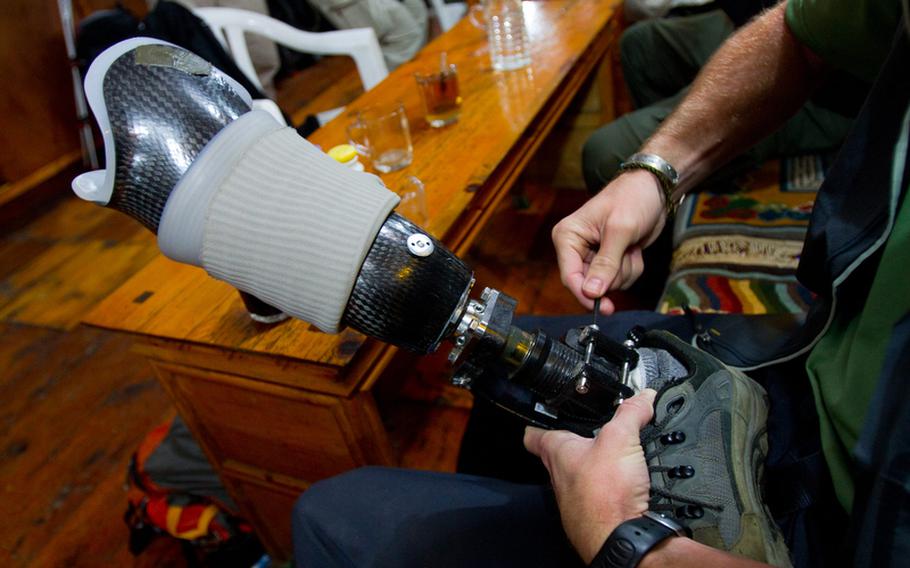 Veteran Matt Nyman makes some adjustments to his prosthetic before heading out on the trail. Nyman was among a group of wounded veterans who took part in a Himalayan mountain climb, which is the subject of the new documentary film "High Ground." (Photo courtesy of Didrik Johnck)

Veteran Matt Nyman makes some adjustments to his prosthetic before heading out on the trail. Nyman was among a group of wounded veterans who took part in a Himalayan mountain climb, which is the subject of the new documentary film "High Ground." (Photo courtesy of Didrik Johnck) 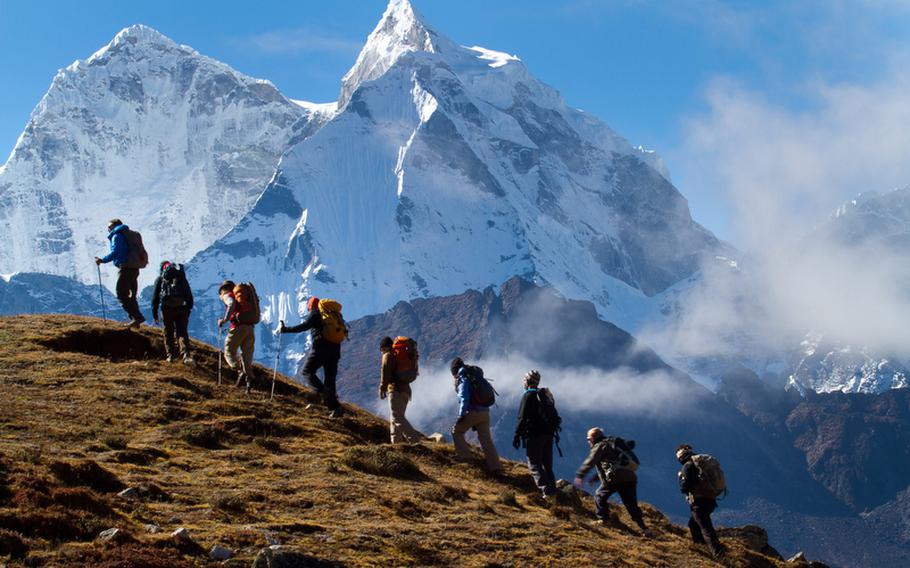 A group of wounded vets makes the climb up the 20,100-foot Lobuche Peak in Nepal. The expedition launched a new program, Soldiers to Summits, which aims to empower vets who suffered severe injuries, such as amputations. (Photo courtesy Didrik Johnck) 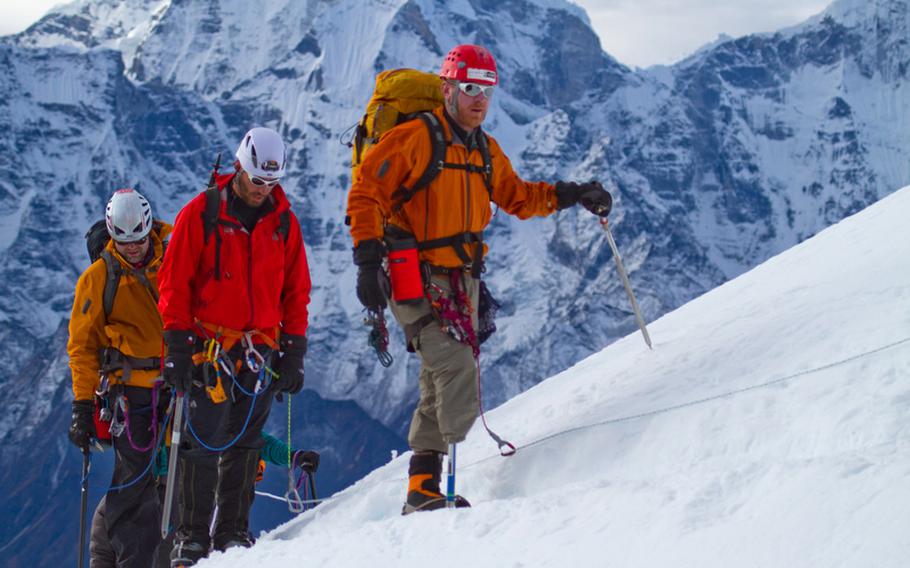 Chad Butrick, Ike Isaacson, Matt Murray, right to left, three-fourths of the the way up Lobuche Peak in Nepal at about 18,000 feet. The 2010 expedition by a group of wounded vets launched a new program, Soldiers to Summits, which aims to empower vets who suffered severe injuries, such as amputations. (Photo courtesy Didrik Johnck) 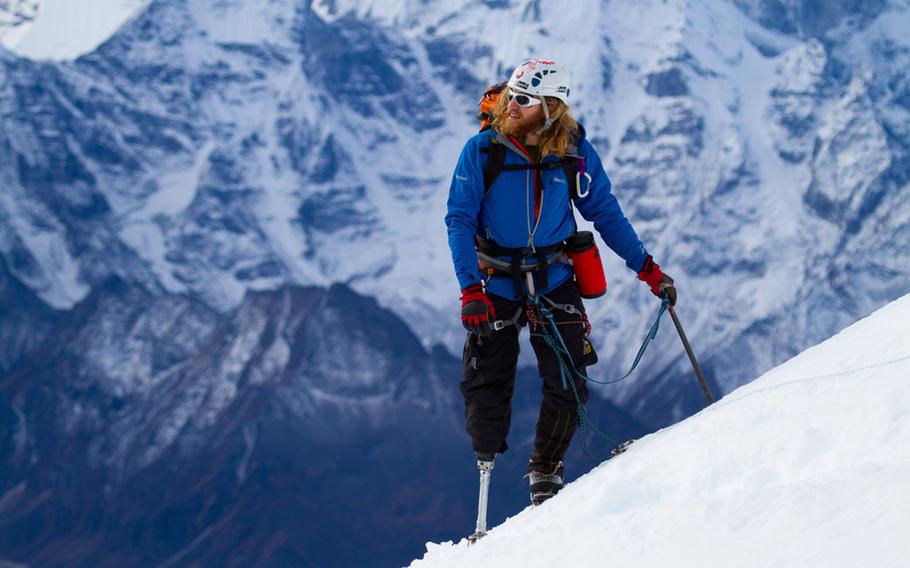 Chad Jukes, a wounded veteran, approaches the summit of a mountain peak high in the Himalayas. The 2010 ascent up the Lobuche Peak is the subject of a new documentary film and also served as the inspiration for a new program that uses mountain climbing as a way to help veterans overcome the scars of war. (Photo courtesy Didrik Johnck) 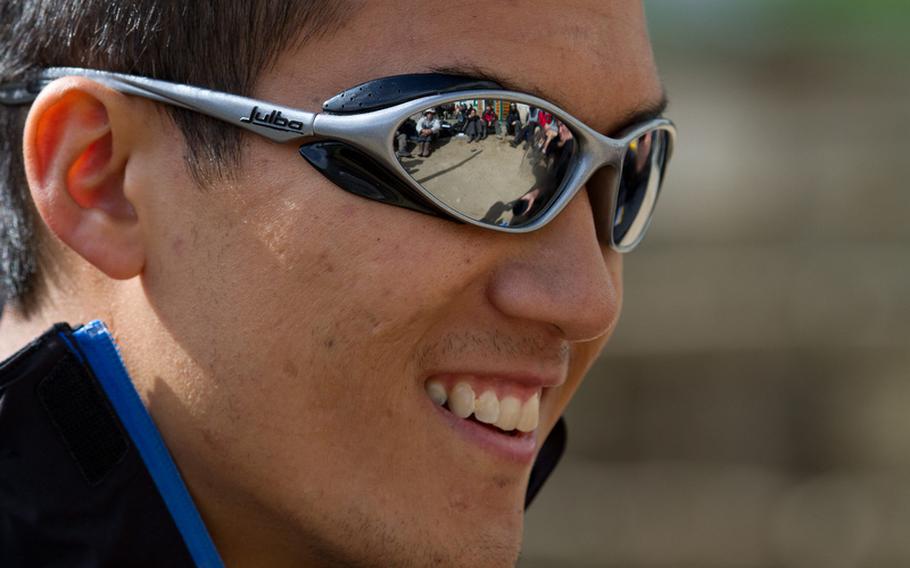 Steve Baskis, a wounded Iraq War vet featured prominently in the new documentary film "High Ground," is now serving as a mentor for the veterans program Soldiers to Summits, an initiative of the Colorado nonprofit No Barriers USA. Baskis will be taking part in another climb with vets in Ecuador this December. (Photo courtesy Didrik Johnck) 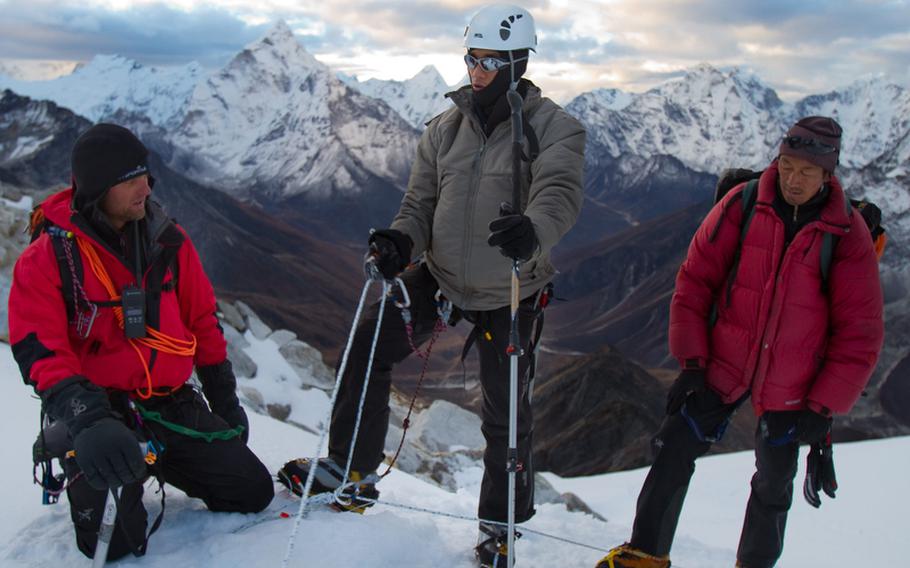 Steve Baskis, who lost his sight to a roadside bomb blast in Iraq in 2008, works his way up to the top of a mountain peak in the Himalayas. That climb in 2010 is the subject of the new documentary film "High Ground," which features wounded veterans. The climb also launched a new program called Soldiers to Summits. (Photo courtesy of Didrik Johnck)

STUTTGART, Germany -- The view from the summit is the payoff, one reason many mountain climbers endure weeks of agony on the grueling path to the tops of the world&rsquo;s tallest peaks.

But for Iraq War vet Steve Baskis, the climb up the 20,100-foot Lobuche Peak in Nepal didn&rsquo;t end with a soul-stirring view of the Himalayas. While his fellow military veteran climbers could gaze out at Mount Everest and the majestic valley below, Baskis was in darkness.

&ldquo;It is a painful thing to be blind,&rdquo; said Baskis, who lost his sight to a roadside bomb blast in 2008. &ldquo;I miss a lot of things. I miss being able to see campfires, watching the snow fall, facial expressions. It&rsquo;s something that I can adapt to and push past, but I hate being blind.&rdquo;

But Baskis loves mountains and the challenge of climbing them has helped the 26-year-old put his life back together. Although he couldn&rsquo;t see the view at the top, for him, reaching the summit was his payoff.

Soldiers to Summits, a program sponsored by the nonprofit No Barriers USA, has been key, said Baskis, who took part in the 2010 climb that spawned the new veteran outreach program. The initial expedition in the Himalayas by a group of 11 veterans, accompanied by 10 Mount Everest climbers, is the subject of a documentary film, &ldquo;High Ground.&rdquo; Released in U.S. theaters earlier this month, the film by Academy Award-winning producer Don Hahn covers the journey from start to finish and spotlights veterans searching for peace amid some of the world&rsquo;s harshest terrain. A special screening was recently held at Patch Barracks in Stuttgart, home to U.S. European Command.

On the heels of the movie&rsquo;s release, Soldiers to Summits, established by a group of climbers including adventurer Erik Weihenmayer &mdash; the only blind person to reach the summit of Mount Everest &mdash; is now poised for its next big climb with wounded warriors.

In December, a group of vets will be traveling to Ecuador to climb the 19,300-foot Cotopaxi, an active volcano. Next year, Soldiers to Summits will lead Allied South Pole Challenge 2013, a five-week mission by sled. Four other mountain climbs in South America are also planned for next year.

&ldquo;We aren&rsquo;t only providing a free trip or experience,&rdquo; said Charley Mace, Soldiers to Summits program director. &ldquo;We&rsquo;re not creating climbers. We&rsquo;re hoping to provide more of a tool kit for people to overcome their barriers. We challenge the people who come through our program, and we&rsquo;re using the mountains as the ultimate metaphor. It&rsquo;s better than baseball and whatever else you can think of.&rdquo;

Mace, who accompanied Weihenmayer on his 2001 Everest climb, said the group&rsquo;s 2010 climb with veterans was originally intended to be a one-time event.

&ldquo;It was super emotional for all the participants, from the trekkers, to the climbers to the guides,&rdquo; he said. &ldquo;It was cathartic and one of those seminal moments. That was too good to let pass, so we tried to institutionalize it.&rdquo;

After that, Soldiers to Summits was formally launched. The group will soon be accepting applications for its series of wounded warrior climbs next year. No climbing experience is required for the missions, but applicants must have a base fitness level to be accepted for a trip and commit to a training program that prepares members for the climb.

While such climbs are demanding for even the fittest of athletes, Soldiers to Summits missions have the added challenge of supporting vets who are coping with profound physical limitations and the emotional scars of war. The injuries of participants range from amputations to traumatic brain injury and post-traumatic stress disorder.

Chad Stone, an Army veteran, was among the group of vets who took part in the 2010 Nepal climb. He was medically discharged in 1999 in connection with a traumatic brain injury suffered in a training accident, and later lost a leg in a car accident. Now, he will be serving as a mentor to other vets on the trip to Ecuador in December.

There were &ldquo;a lot of obstacles to overcome, but that is what this is all about,&rdquo; Stone, 35, said. &ldquo;We&rsquo;re not doing it because it is easy. It&rsquo;s about helping veterans overcome barriers.&rdquo;

At a time when many veterans are struggling to come to terms with painful war experiences, the sense of empowerment that comes from scaling mountains has a healing effect, he said.

&ldquo;This isn&rsquo;t a suicide prevention program per se, but it is a way for people to reclaim their lives,&rdquo; Stone said. &ldquo;The mountain is there and it&rsquo;s real and it&rsquo;s hard and so is living life. It&rsquo;s more of a metaphor for how we deal with problems in life.&rdquo;

For Baskis, climbing mountains with a team of vets also helps fill some of the void left after losing his military career.

&ldquo;It&rsquo;s hard to explain why I climb,&rdquo; Baskis said. &ldquo;I think I joined the military because I was driven to pursue something. I wanted to live that kind of life. And the best way to push myself again was to go and continue to climb mountains. When you do something amazing and push yourself to the finish, you have such a sense of overwhelming accomplishment.&rdquo;

&ldquo;It&rsquo;s about not giving up on yourself,&rdquo; Baskis said.

Like military service, mountain climbing is all about team work, Mace said.

&ldquo;We&rsquo;ve got rope teams instead of fire teams,&rdquo; Mace said. &ldquo;I&rsquo;ve got your back, you&rsquo;ve got mine. Vets are used to being trained and being thrown into unknown situations. There are a lot of parallels.&rdquo;

During the Nepal climb, the vets moved across rugged terrain, scaling steep cliffs and traversing narrow bridges above raging rivers. The film &ldquo;High Ground&rdquo; not only captures that adventure, but also veterans opening up about their struggles to overcome the physical and emotional wounds of war.

Baskis is featured prominently in the film.

&ldquo;It kicked my ass. I&rsquo;m not going to lie,&rdquo; he said of the experience.

&ldquo;I want to see the world. I can&rsquo;t see it in the same way I used to. It&rsquo;s just a different perspective now,&rdquo; said Baskis, who hopes the new documentary will inspire fellow wounded warriors. &ldquo;I hope that it&rsquo;ll push people to look past their injury and look to the future and find something else they might love doing.&rdquo;

More information about Soldiers to Summits can be found at soldierstosummits.org.