Missiles in failed attack on US ships could have been Iran-supplied, Pentagon says 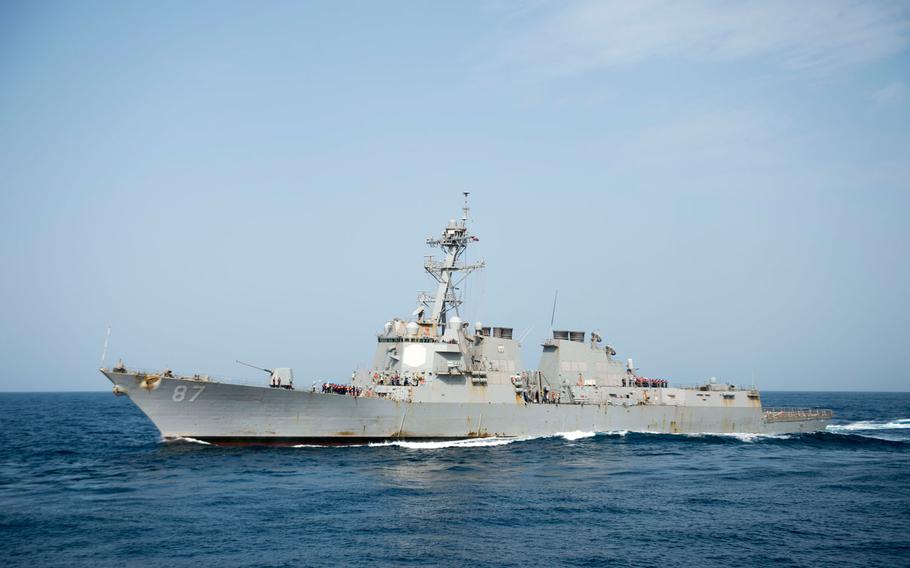 WASHINGTON — The Pentagon won’t rule out that Iranian missiles provided to rebels in Yemen were used to fire upon two U.S. warships in the Red Sea on Sunday, spokesman Capt. Jeff Davis said Tuesday.

The destroyer USS Mason and amphibious warship USS Ponce were conducting “routine operations in international waters” in the Red Sea on Sunday night when the first of two cruise missiles was detected heading toward them, Davis said.

The commanding officer of the Norfolk, Va.,-based USS Mason believed the missiles to be “a threat to his ship and launched countermeasures,” Davis said. The second cruise missile, launched about an hour later, fell into the sea before it was considered a threat to the ships, Davis said.

“The initial thoughts are that this [attack] was aimed at them,” Davis said.

On Tuesday, Davis confirmed that both missiles were launched from a coastal area of Yemen that is under the control of Iranian-backed Houthi Shiite rebels. The Houthis took control of Yemen in early 2015; within a month, the U.S. embassy evacuated all personnel, including its security contingent of U.S. Marines. U.S. special operations forces have remained in the country to help support the Yemeni military.

Since then, the U.S. has supported Saudi Arabia-led bombing of the rebels in Yemen by providing air support, refueling, logistics and targeting assistance. Davis said Tuesday that while the Houthis may have obtained advanced weaponry through the facilities they now control in Yemen, the U.S. was not ruling out that the missiles might have come from Iran.

“It’s no secret that Iran has been actively supplying them and giving them the tools of war,” Davis said.

Davis said the Pentagon “was looking very hard at” the missiles used and the location of their launch to identify who was responsible, and was keeping all options open to respond.

“Anytime anybody engages a U.S. Navy ship at sea in hostility ... they do so at great peril to themselves,” he said.

Sunday’s missile launches against the USS Mason and USS Ponce, and others that were aimed at Saudi Arabia, were seen as retaliation for an airstrike Saturday that hit 140 mourners at a funeral in the Houthi-controlled Sanaa, Yemen’s capital. Saudi Arabia denied responsibility for that airstrike, but unconfirmed images from the destroyed site seem to indicate that U.S.-produced bombs were used. Reuters reported over the weekend that State Department documents obtained under the Freedom of Information Act indicate that officials were concerned that supporting the Saudi effort could expose the U.S. to accusations of war crimes.

On Saturday, the U.S. said it was reviewing its support for the Saudi campaign.

“U.S. security cooperation with Saudi Arabia is not a blank check,” National Security Council spokesman Ned Price said in a White House statement. “In light of this and other recent incidents, we have initiated an immediate review of our already significantly reduced support to the Saudi-led Coalition and are prepared to adjust our support so as to better align with U.S. principles, values and interests, including achieving an immediate and durable end to Yemen’s tragic conflict.”