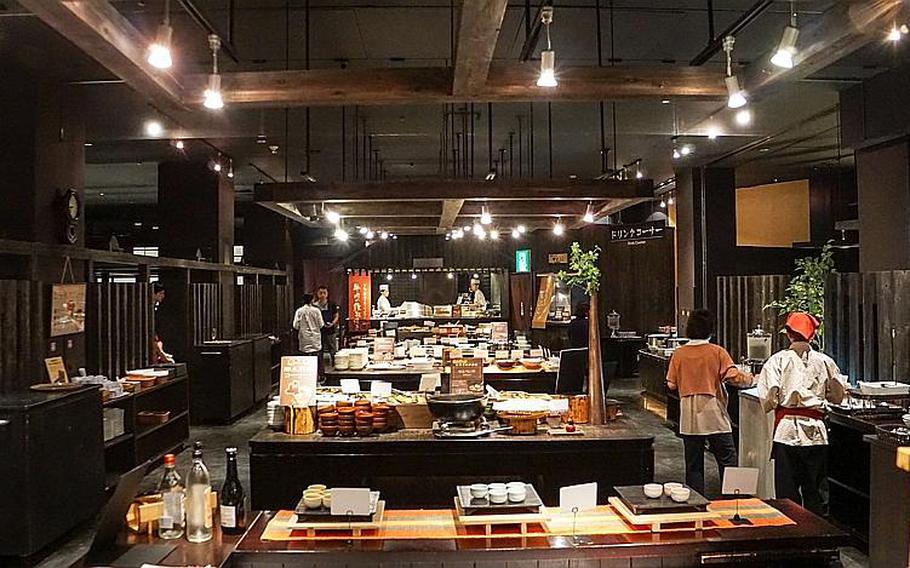 The many serving stations at the Noresore Shokudo buffet at the Hoshino Resort Aomoriya near Misawa Air Base, Japan, offer something for everyone, even picky eaters. (Leon Cook/Stars and Stripes)

The many serving stations at the Noresore Shokudo buffet at the Hoshino Resort Aomoriya near Misawa Air Base, Japan, offer something for everyone, even picky eaters. (Leon Cook/Stars and Stripes) 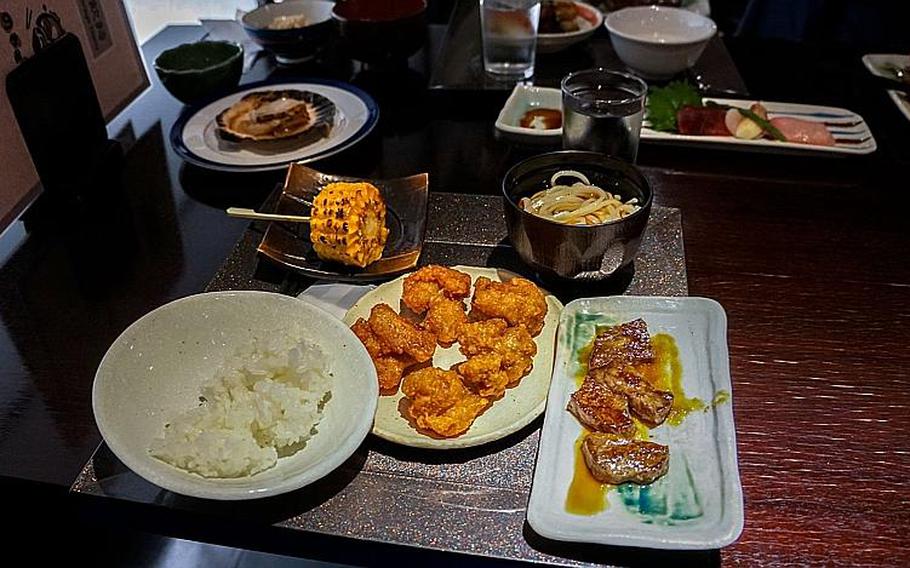 The Noresore Shokudo buffet offers many Eastern and Western favorites alike - as shown on this platter with grilled corn on the cob, fried chicken, beef yakiniku with apple soy sauce, udon noodles, and rice. (Leon Cook/Stars and Stripes) 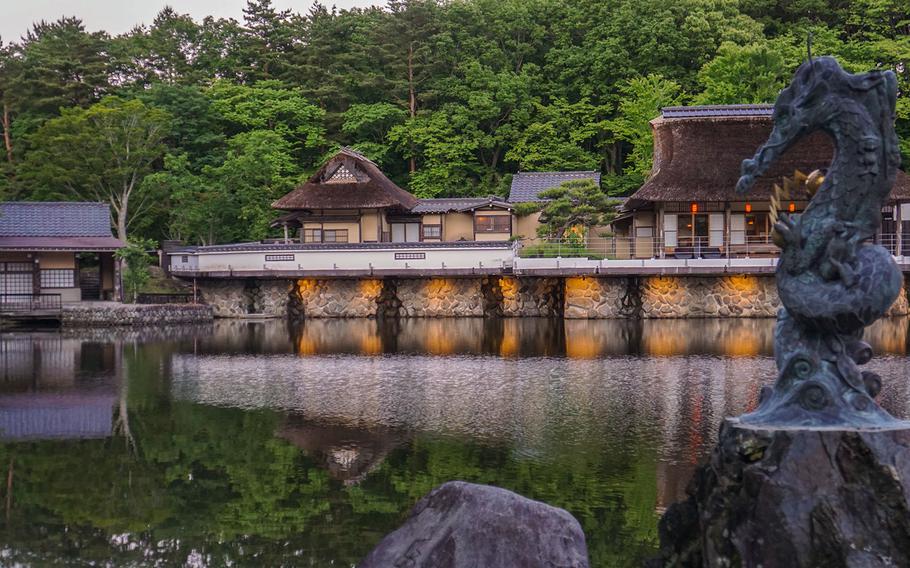 It's well worth taking a walk around the pond, enjoying the traditional architecture and idyllic setting before you visit the Noresore Shokudo buffet at Hoshino Resort Aomoriya. (Leon Cook/Stars and Stripes) 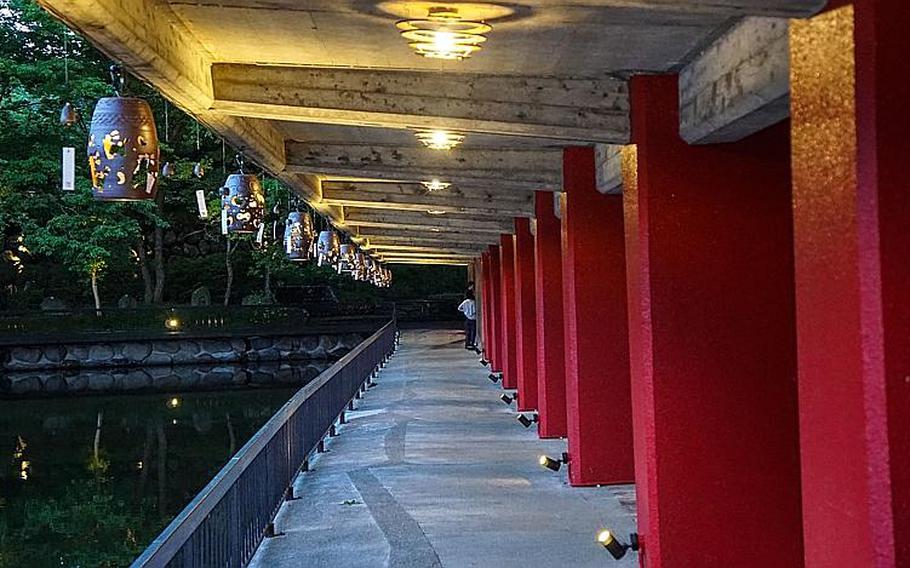 At one corner of the pond at Hoshino Resort Aomoriya, several shrines allow patrons to pay their respects to the local kami, or spirits, to ensure good luck. (Leon Cook/Stars and Stripes) 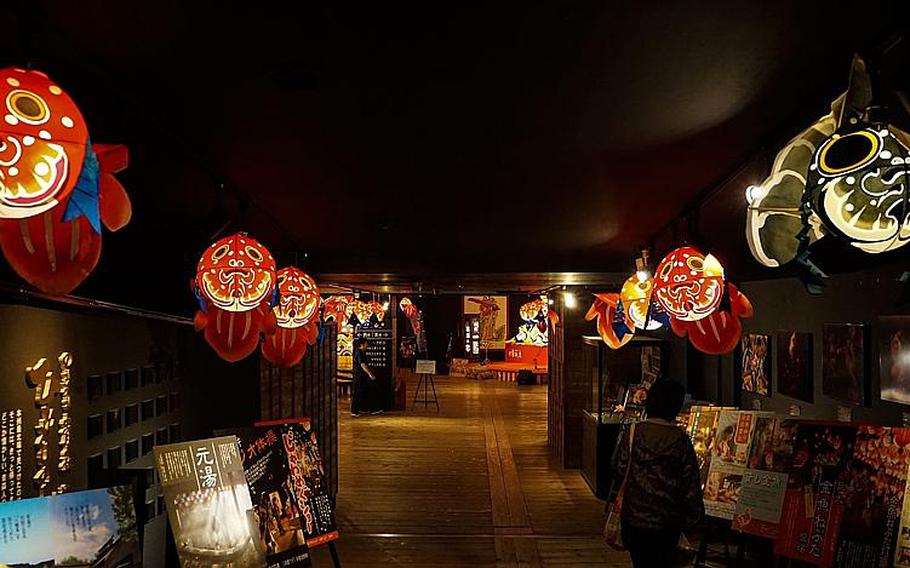 The corridors to the buffet, located in the basement of the main building at Hoshino Resort Aomoriya, are lavishly decorated with fish-shaped lanterns. (Leon Cook/Stars and Stripes)

While on a recent temporary assignment at Misawa Air Base, located in northeastern Japan’s Aomori prefecture, a long and rainy day left me feeling worn out and exhausted. But, when my colleagues invited me to dinner at a nearby all-you-can-eat buffet serving up Japanese, Chinese and Western foods, I jumped at the chance.

Located inside the main building of the Aomoriya resort complex, Noresore Shokudo allows diners to choose from nearly 80 different dishes in a casual setting designed to resemble an old-fashioned farm kitchen. The resort’s website says the cuisine is meant to evoke “Kaccha no Bangenmanma” — or “mother’s cooking” in the Aomori dialect.

The food at Noresore Shokudo is a far cry from the buffets of Cracker Barrel — and it’s definitely not close to my mother’s cooking. However, as I soon discovered, there’s plenty for everyone to love among the restaurant’s extensive options.

As a first-time visitor to Misawa, I was surprised to learn how difficult it is to get around the city without a car, especially compared to the area around Yokota Air Base in western Tokyo, where I live. Walking to the resort from the base would have taken about an hour by foot — but, given the scenery, it’d probably be worth the walk.

I briefly explored the resort’s grounds before heading to the restaurant, which includes the remnants of the former Komaki Onsen. A pleasant stroll around the resort’s pond turned into the highlight of my evening, as the waning light and the idyllic setting produced breathtaking views. I was fortunate enough to bring along my camera, and had a wonderful time photographing the area before my meal.

Finally, it was time to eat.

At 4,860 yen per person (about $45), Noresore Shokudo is a bit pricier than other all-you-can-eat options in Japan — however, meals at the restaurant are included in resort guests’ accommodation plans.

The buffet’s selection of Western foods was a godsend for me; many of the Japanese dishes on offer were made with seafood, which I don’t eat. However, there were also plenty of non-seafood Japanese and Chinese options. The restaurant is also kid-friendly and provides child-sized utensils for kids who haven’t quite mastered chopsticks.

After examining my options, I piled my wooden buffet tray with a variety of dishes, including: nugget-sized fried chicken, rice, a small slice of grilled corn on the cob, beef yakiniku, tender pork cuts, and udon. All the food was served fresh — a notable difference from some stateside buffets where less-popular food items might spend several hours under a heat lamp.

Out of all the dishes, the yakiniku, served with an apple-flavored soy sauce, was a definite standout.

Apples were a recurring theme throughout the restaurant’s selection, and a stop in the gift shop confirmed my suspicion that Aomori Prefecture is famous for producing some of the most sought-after apples in Japan.

For dessert, I selected caramelized apples with added caramel topping. I also indulged myself with a dish of vanilla and grape-flavored ice cream, as well as a scoop of apple sorbet.

After dinner, we decided to partake in the resort’s free cultural performance, which is held at 8:45 p.m. nightly. The show, which features renditions of traditional folk songs from the region, is meant to replicate the excitement and atmosphere of Aomori’s famous Nebuta Matsuri — a massive festival that takes place every August.

As the show is geared toward Japanese speakers, most of the content went straight over my head. However, I very much enjoyed watching the yukata-clad performers play the sukoppu shamisen — a type of traditional Japanese guitar made from what looks like a large snow shovel — that’s unique to northern Japan.

Although cheaper options can be found in Misawa, Noresore Shokudo’s vibrant ambiance makes it a unique destination for anyone visiting the region. Just be sure to bring your appetite.

Directions: Aomoriya Resort can be accessed either on foot via Misawa Station (15-minute walk), or by car (20 minutes drive from Misawa Air Force Base). Free parking is available at the resort. Noresore Shokudo is located in the basement of the resort’s main building.

Price: 4,860 yen per person (about $45) for non-guests. A wide selection of alcoholic beverages are available for an additional charge.