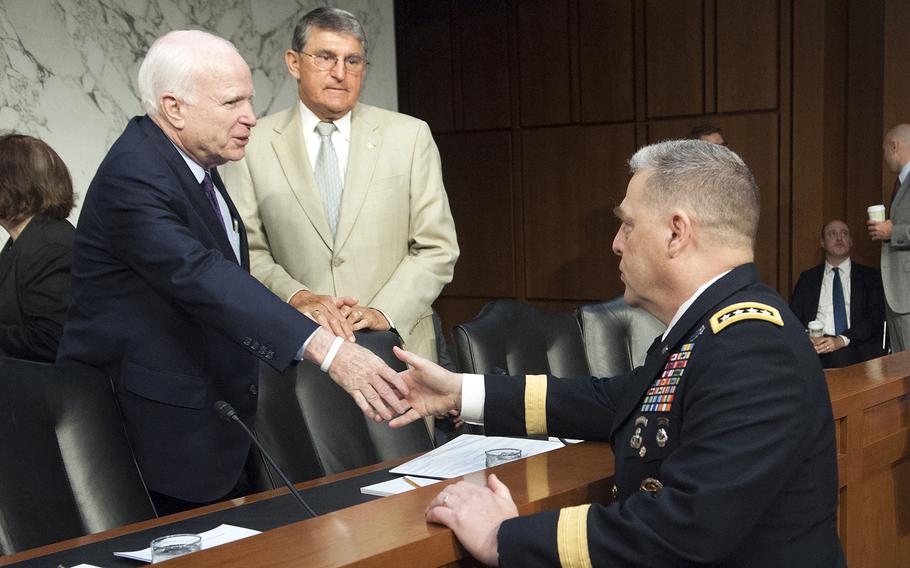 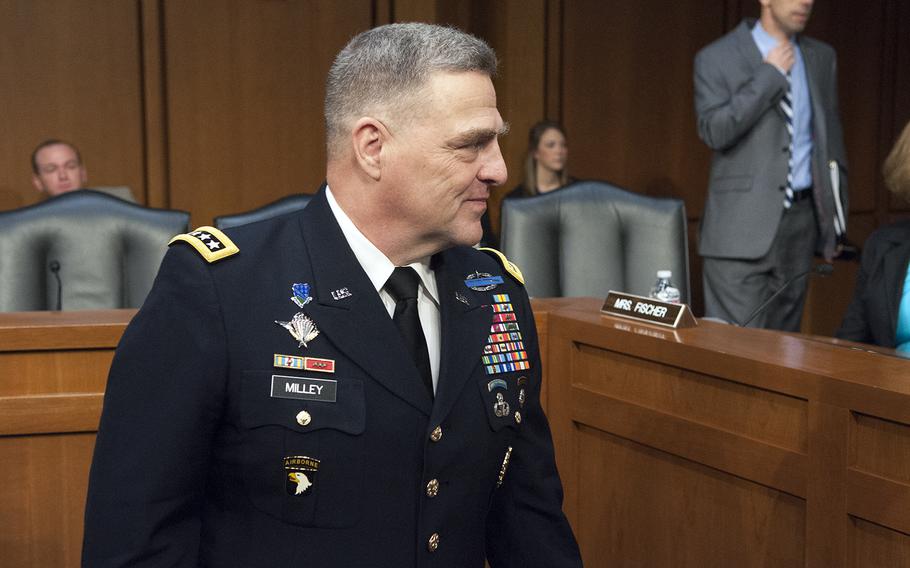 Gen. Mark Milley greets members of the Senate Armed Services Committee on Tuesday, July 21, 2015, as committee members considered Milley's nomination to be the next Army chief of staff. (Carlos Bongioanni/Stars and Stripes)

ARLINGTON, Va. — As the Army’s new chief of staff took responsibility for the service Friday morning, he was called “a leader, a warrior and a statesman.”

Gen. Mark Milley will need those skills as the Army’s top officer for the next four years at a time when budgets and forces are shrinking and global threats are growing.

Milley was sworn in as the Army’s 39th chief by Army Secretary John McHugh during a traditional ceremony at Fort Myer’s Summerall Field in Arlington, Va., as his predecessor Gen. Raymond Odierno retired.

Defense officials lauded Milley, who most recently led U.S. Army Forces Command at Fort Bragg, as a battle-hardened warrior and intellectual with the necessary skill set to lead the Army through an uncertain future with the possibility of a continually shrinking force if sequestration continues into fiscal 2016.

“He’s the right officer for the Army for the next four years to shape our forces and continue restoring its readiness that the nation expects from our Army,” Defense Secretary Ash Carter said during the ceremony. “Mark is a leader, a warrior and a statesman.”

Carter recounted being in Afghanistan in 2013 with Milley when the U.S. consulate in Iraq was attacked.

“As we flew there I saw him take decisive command of the scene,” the secretary said. “In addition to decades of such operational experience Mark clearly also has the strategic vision to build upon what (Odierno) started. I have confidence, I know he’ll succeed because he carries that same unyielding commitment to the Army, soldiers and to families.”

McHugh said Friday’s ceremony was “a typically bittersweet moment,” because the Army was losing Odierno, a highly accomplished general he called a “battle buddy and friend.”

“Ray is as fine an officer as I have ever known,” McHugh said Friday. “He’s a leader wholly committed to the Army … wholly dedicated to the people and relationships that propel our mission and to the broader strategies within the Department of Defense.”

Before becoming the Army’s top general in September 2011, Odierno served in key roles throughout the Army, racking up more than 50 months in Iraq, including two years as the commander of all U.S. forces there.

Odierno served as the Chief of Staff as the U.S. roles in Iraq and Afghanistan drew down and budgets were cut, forcing the service to dramatically cut force strength. More recently he’s been at the forefront as new threats have emerged, including the Islamic State in the Middle East and increased tensions with Russia in eastern Europe.

Odierno used his speaking time to thank his family and the troops who served under his watch.

Those soldiers, he said, are what kept him in uniform for 39 years.

“The soldiers on the field today represent all of our Army,” Odierno said. “They represent excellence, and they represent the best of who we are as a nation.”

He said he looked forward to his tenure as chief of staff and will strive to keep soldiers and their families in the forefront of his mind as the Army works to maintain its position as the world’s foremost land fighters.

“To succeed in that unforgiving environment of ground combat we must have forces that have both capacity and capability, both size and skills,” Milley said. “They must be manned, they have to be equipped and they better be trained, and they will be well-led. We must adapt to combat. We don’t have the luxury of a single opponent. We must be able to fight gueriallas and terrorists all the way up to nation-state militaries.

“Readiness to fight and win … is and will remain the United States Army’s No. 1 priority. There will be no other No. 1,” he said. “We will always be ready to fight today, and we will always prepare to fight tomorrow.”