Military turns to acupuncture as alternative to prescription painkillers 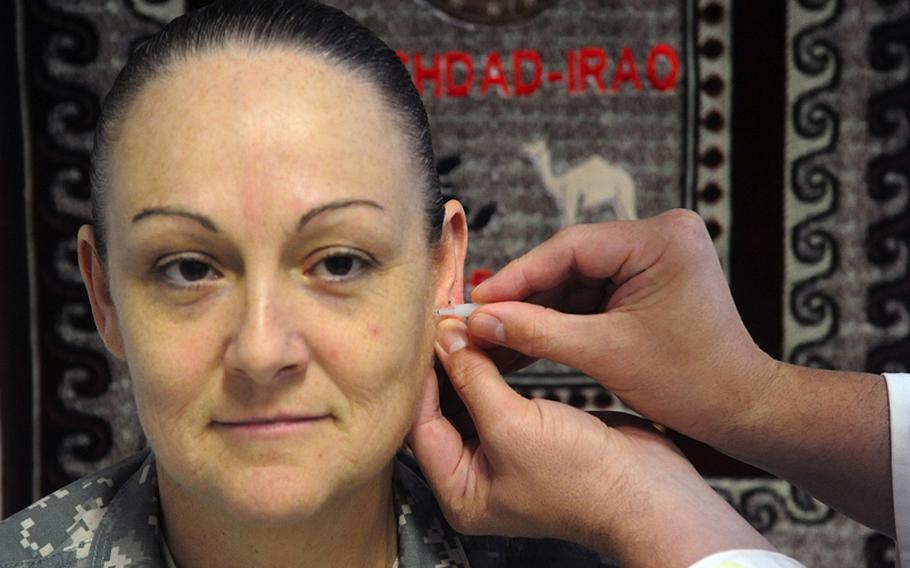 Master Sgt. Jamie Gilmore has an acupuncture needle applied to her ear by Dr. (Maj.) Ronald White, director of pain services at Landstuhl Regional Medical Center. Gilmore receives the treatment regularly for a bulging disk and other back pain. (Michael Abrams/Stars and Stripes)

Master Sgt. Jamie Gilmore has an acupuncture needle applied to her ear by Dr. (Maj.) Ronald White, director of pain services at Landstuhl Regional Medical Center. Gilmore receives the treatment regularly for a bulging disk and other back pain. (Michael Abrams/Stars and Stripes) 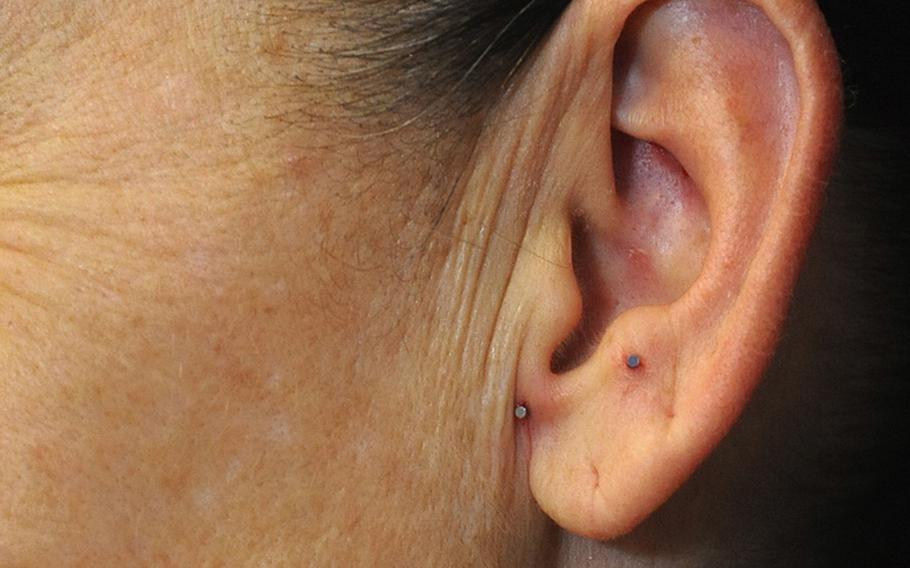 Master Sgt. Jamie Gilmore has combat acupuncture regularly to help relieve pain from a bulging disk and other back pain. (Michael Abrams/Stars and Stripes) 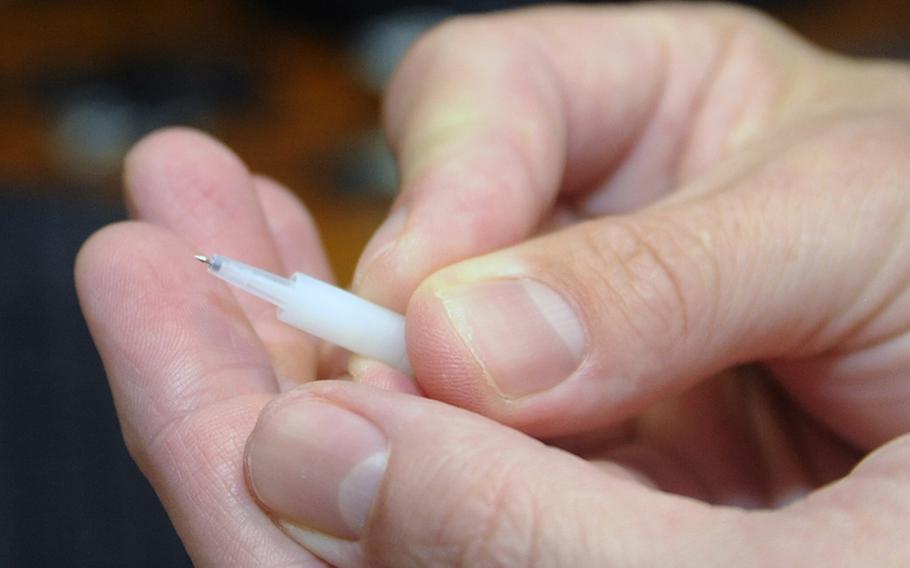 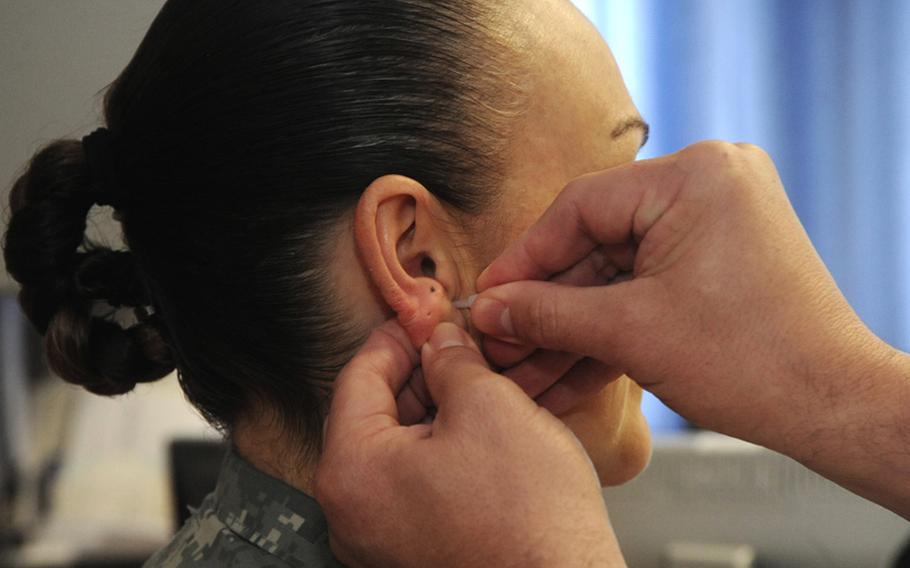 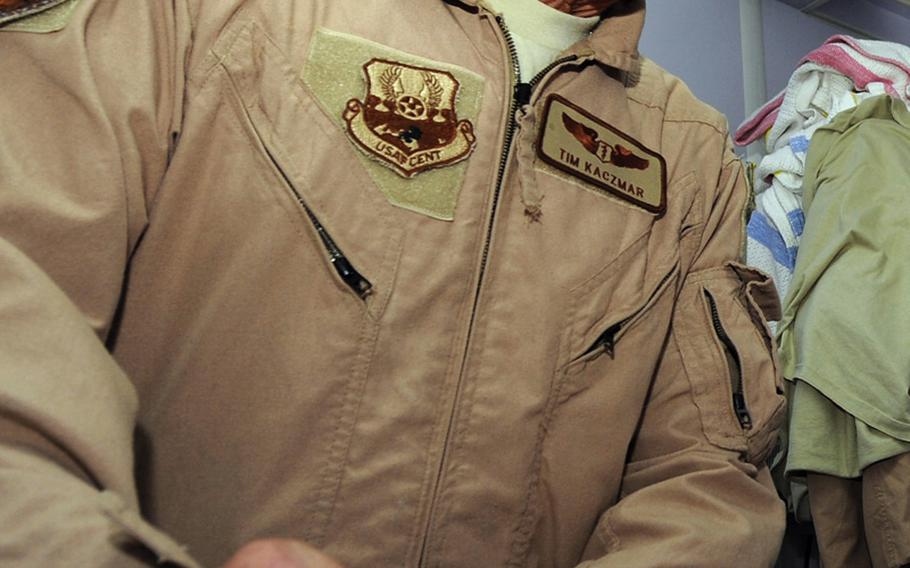 Lt. Col. Dan Ferris has taken some ribbing for what he calls &ldquo;the bling in my ears.&rdquo;

But the 44-year-old Air Force pilot doesn&rsquo;t mind: What appear to be post earrings are actually tiny acupuncture needles, which Ferris said have helped ease his chronic lower back pain, allowing him to keep up a relentless flying schedule during six months in Afghanistan. He can&rsquo;t pop painkillers, because fliers are limited to certain drugs and doses.

&ldquo;Acupuncture helps with the pain, to the point of removing it,&rdquo; Ferris said recently from Kandahar Air Field. &ldquo;What else can you ask for when you have an injury? For me, it&rsquo;s better than drugs.&rdquo;

The military is finding that Western medicine alone doesn&rsquo;t always work in relieving the suffering of troops dealing with a complex range of injuries after nine years of war, from multiple concussions to backs strained under heavy packs and body armor.

As the number of prescriptions for opiate painkillers skyrockets &mdash; and more troops admit abusing those drugs &mdash; the military has been forced to look beyond conventional ways to treat pain.

&ldquo;This is a nationwide problem,&rdquo; said Brig. Gen. Richard Thomas, assistant Army surgeon general. &ldquo;We&rsquo;ve got a culture of a pill for every ill.&rdquo;

In June, the Army surgeon general released a report addressing the lack of a comprehensive pain-management strategy, suggesting alternative treatments including meditation and yoga.

Even though some in the medical field maintain that acupuncture has never been proved effective, the Air Force sees it as one of the more promising alternatives to combat pain.

The service runs the military&rsquo;s only full-time acupuncture clinic at Malcolm Grow Medical Center at Joint Base Andrews, Md. Last year, it launched a program to train more than 30 military doctors to use acupuncture in the war zone and at their base clinics. The program will be expanded next year with the Air Force, Army and Navy combining funds for two courses to certify 60 active-duty physicians as medical acupuncturists.

&ldquo;I think we realized with some of the tremendous injuries these folks have ... we certainly want to find an alternative to help them out, to eliminate or reduce their use of pain medication,&rdquo; said Col. Dominic DeFrancis, medical corps director for the Air Force Surgeon General.

Acupuncture, he says, has few side effects and no apparent drug interactions, and it works quickly &mdash; allowing some troops with pain to return to duty faster.

&ldquo;This is an effective therapy that works and should be part of our physicians&rsquo; capabilities,&rdquo; DeFrancis said.

Needles for the battlefield

The Air Force training, run in conjunction with the Helms Medical Institute of Berkeley, Calif., teaches military physicians a variety of acupuncture techniques, from traditional Chinese to Korean hand acupuncture. Clinicians also are learning a type of acupuncture developed in 2001 by an Air Force doctor that&rsquo;s being used in frontline hospitals and could be applied, Air Force officials say, right on the battlefield.

&ldquo;The whole idea of the battlefield concept was trying to develop an acupuncture technique that would be generic for all pain and that would be very rapid in terms of its effectiveness,&rdquo; said Dr. Richard Niemtzow, a retired Air Force colonel who modified the method from French auricular acupuncture needles and the results of MRI studies on pain.

Small needles are placed in up to five pain-control points in each ear, and they stay for three or more days before falling out.

The sterilized needles are small enough to carry in a pocket, easily fit under a military helmet, and the technique is simple to apply, said Niemtzow, who&rsquo;s one of two full-time Air Force acupuncturists.

In the right combat situation, he says, acupuncture could replace a narcotic.

&lsquo;It&rsquo;s been a wonderful tool to have as a doctor here,&rdquo; he said.

He most commonly sees patients with back pain, headaches, sleep disturbances and anxiety. High doses of painkillers aren&rsquo;t a great option in combat, Kaczmar said.

&ldquo;We&rsquo;re out here getting rocketed,&rdquo; he said. &ldquo;You don&rsquo;t want to give them medication to the point where they&rsquo;re groggy.&rdquo;

&ldquo;A couple days ago, I had a headache coming on to where my vision was getting blurry,&rdquo; she said recently from Kandahar. &ldquo;Dr. Kaczmar did ear acupuncture on me. In 15 minutes, my headache was gone. I haven&rsquo;t gotten a headache since then.&rdquo;

On a recent summer day, she dropped into the pain center at Landstuhl Regional Medical Center in Germany, where Dr. Ron White used the Niemtzow technique, pricking both of her ears a millimeter deep with two needles, each gold, silver and platinum.

The first needles didn&rsquo;t bring immediate relief, but after undergoing acupuncture every two weeks for about a year, the pain is tolerable. Gilmore, 44, has been able to resume running, CrossFit training and other physical activities. Most importantly for her, she said, &ldquo;I&rsquo;ve been able to cut back almost completely on prescription medication.&rdquo;

Acupuncture also has its skeptics.

Steven Salzberg, a professor and director of the Center for Bioinformatics and Computational Biology at the University of Maryland, College Park, and a fellow of the American Association for the Advancement of Science, says acupuncture is &ldquo;a joke to any serious scientist: There&rsquo;s absolutely no evidence that it works.&rdquo;

If it has any effect at all, Salzberg said, it&rsquo;s a placebo effect.

&ldquo;I hope no would consider giving a man wounded on the battlefield a sugar pill instead of morphine,&rdquo; she said. &ldquo;Our soldiers deserve better.&rdquo;

But Alexandra York, a research associate in military medical research at the Samueli Institute in Alexandria, Va., which studies alternative therapies, said &ldquo;to just kind of boil it down to a psychological effect doesn&rsquo;t dig deep enough to what is really going on when acupuncture is administered.

&ldquo;A number of MRI studies have shown the effect of acupuncture is really at the brain level.&rdquo;

&ldquo;We&rsquo;ve treated thousands and thousands of patients here with excellent results,&rdquo; said Burns, referring to his work with Niemtzow at the 779th Medical Group&rsquo;s acupuncture clinic at Malcolm Grow.

Each week, he and Niemtzow treat troops with blast wounds, missing limbs, concussions and other injuries at nearby Walter Reed Army Medical Center.

&ldquo;Sometimes it&rsquo;s a little like peeling back the onion,&rdquo; Burns said. By easing their pain little by little, &ldquo;We give them hope, then they go have a good night, a good weekend, and come back and we treat them again, while not giving them medication that could cloud their thinking.&rdquo;

White, an Army major and director of LRMC&rsquo;s pain center, said acupuncture isn&rsquo;t a cure-all for everyone. For about one-third of his patients, it&rsquo;s a &ldquo;home run&rdquo; and their pain goes away completely. With another third, the pain diminishes but doesn&rsquo;t disappear. And for a third, he says, &ldquo;you strike out&rdquo; &mdash; they feel no change.

As Niemtzow emphasizes, &ldquo;It&rsquo;s not a magic bullet. Patients may find themselves being able to enjoy pain-free periods or reduced-pain periods, or combined with medication, a better lifestyle.&rdquo;

The science behind how acupuncture works is not fully understood, experts say. One theory, White said, is that acupuncture taps into nerve pathways to the brain. With the reception of dual pain and acupuncture signals, the brain&rsquo;s information processing gets muddled and pain is disrupted or dulled.

White prefers to focus instead on the results.

&ldquo;There&rsquo;s no risk; it gives you benefit,&rdquo; White said. &ldquo;Our goal &mdash; my end result &mdash; is function. If you come to me complaining that you can&rsquo;t play with your kids, you can&rsquo;t sleep at night, you can&rsquo;t work, and six months later, I have you playing, sleeping and back to work, I don&rsquo;t care if it&rsquo;s placebo.&rdquo;