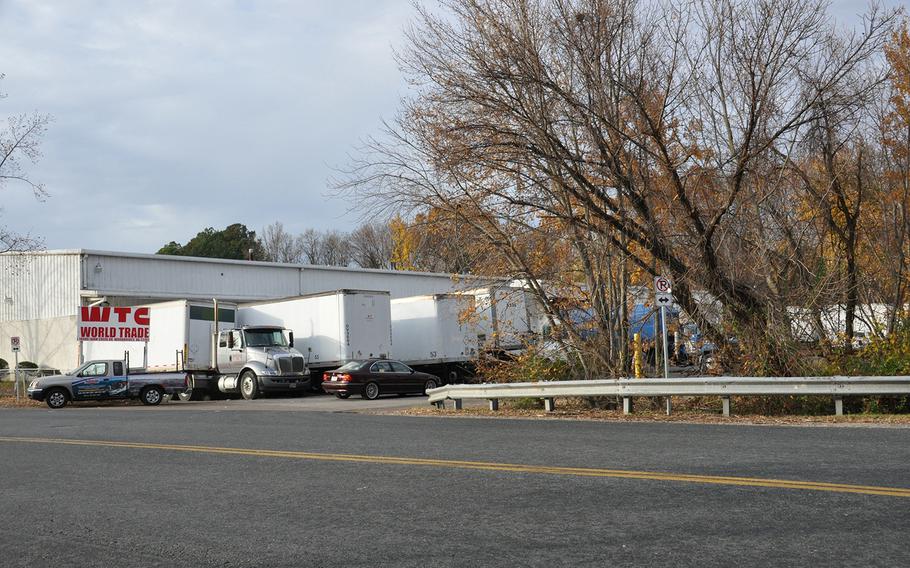 Buy Photo
World Trade Company, a clothing recycling company, operates out of an industrial park in Woodbridge, Va. Officials from the Military Family Support Center have accused the firm of using their name illegally to solicit donations from locals. (Leo Shane III/Stars and Stripes)

Buy Photo
World Trade Company, a clothing recycling company, operates out of an industrial park in Woodbridge, Va. Officials from the Military Family Support Center have accused the firm of using their name illegally to solicit donations from locals. (Leo Shane III/Stars and Stripes) 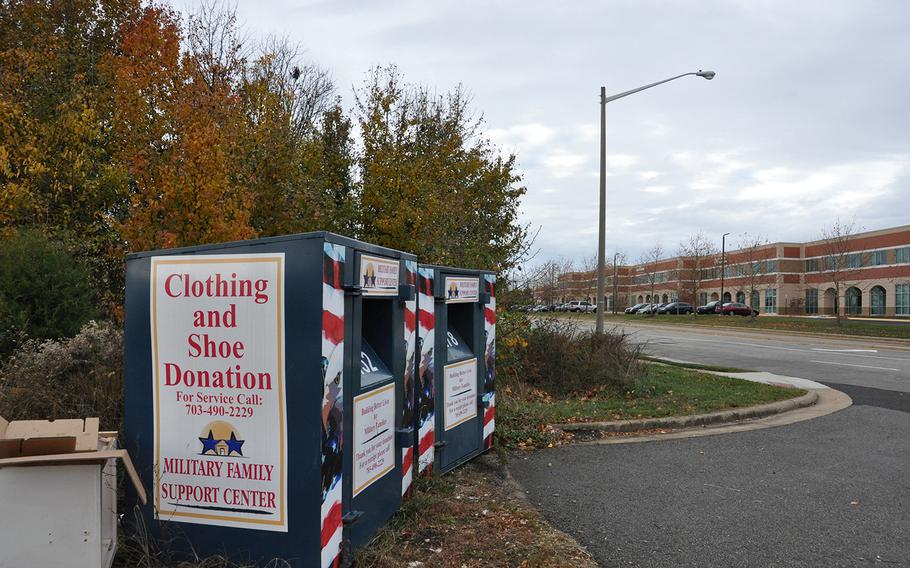 Buy Photo
A clothing donation bin sits by the roadside near an office park in Woodbridge, Va. Officials from the Military Family Support Center say they have no affiliation with the collection efforts, even though their name and logo is on the bins. (Leo Shane III/Stars and Stripes) 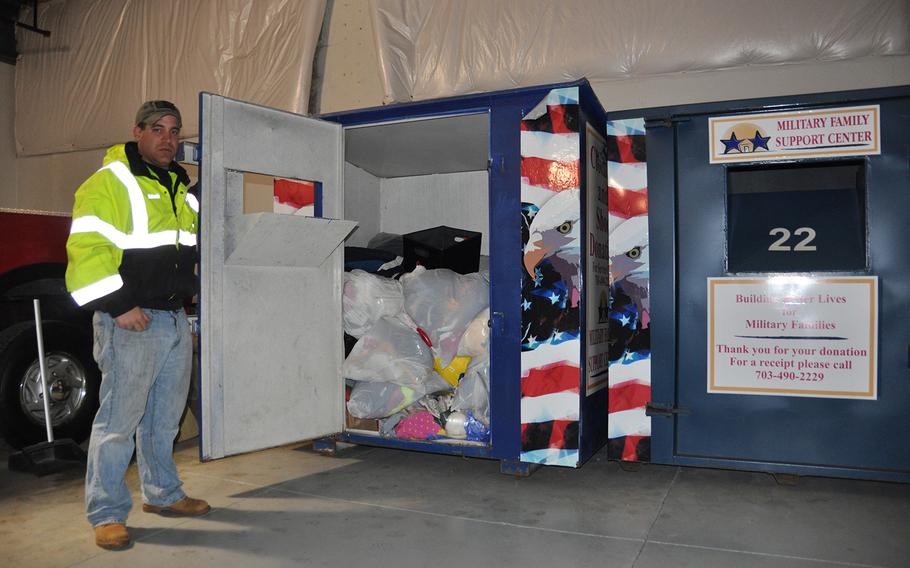 Buy Photo
Adam Leitao, veteran of Iraq and Afghanistan who runs Adam's Towing in Leesburg, Va., shows off the contents of one of the misleading Military Family Support Center bins that he has impounded in recent months. The military charity does not collect items in the bins and receives no compensation for the use of their name. (Leo Shane III/Stars and Stripes)

WOODBRIDGE, Va. -- Across from an office park in a convenient roadside pull-off sits a pair of bins adorned with the Military Family Support Center’s logo, allowing locals to drop off clothes, housewares and other valuables.

But none of the donations go to charity.

Instead, they go to a for-profit recycling company using the Center’s name illegally, apparently to supplement their business of selling second-hand clothes to overseas buyers.

Dozens of the bins have appeared around Northern Virginia over the last year, and officials from MFSC say they’ve never seen one cent from the collections.

“It’s frustrating, because we get complaints all the time about these bins, but we have nothing to do with them,” said Jerry Brittain, operations director for the charity.

“It hurts our organization. It gives us a bad name. And some guy is making a lot of money fraudulently off the military connection.”

Veterans groups and charity watchdogs say that isn’t a surprise. Any time a national issue sparks a wave of generosity, it also spurs a disheartening rise in donation scams. Holidays add even more opportunity.

“It’s a sadly common problem,” said Tracy Thorleifson, an attorney with the Federal Trade Commission. “You see both more good and more bad groups pop up whenever there is a need. You should not assume any more that a bin set out is truly collecting for a non-profit group.”

Thorleifson could not comment on the specifics of MFSC’s problems, but said that her agency in recent years has seen plenty of scams allegedly collecting for veterans and first responders.

In the Military Family Support Center scam, the bins are covered with the charity’s name, a picture of an eagle with an American flag and the slogan “Building better lives for military families.”

But the phone number on the bins -- for maintenance and charitable receipts -- belongs to the World Trade Company, based in Woodbridge. Calls to that line default to a voicemail whose messages are rarely returned, according to Brittain and area business owners who have complained about the unwanted bins.

Company president Alan Garada said the unauthorized use of the logo is simply a mix-up and that his firm is paying $3,000 a year to Freedom Support Services -- which he called an MFSC spin-off group -- to use the name on the bins.

Brittain said he has never heard of the group and said no one outside his office would have the authority to allow use of the MFSC name and logo.

Lynchburg attorney David Embrey -- who is listed as the agent for Freedom Support Services, a private corporation -- refused to answer any questions about the organization.

Garada said the logos and name should be updated to reflect the new group soon. He said the arrangement is a net loss for his company, but they do it to help military families. The recycling company boasted more than $1 million in revenues last year and has held several public contracts with local governments.

MFSC sent a cease-and-desist letter to World Trade Company in February but received no response.

Group officials turned down an offer to work with Garada in fall 2012, over concerns that the bins were poorly maintained and often placed on private property without permission.

Adam Leitao, an Iraq and Afghanistan veteran who runs Adam’s Towing in Leesburg, Va., has impounded four of the bins in recent months after business owners complained they were left in parking lots illegally.

Two of them are full of bags of clothes, presumably left by people who thought the items were headed to military resale or needy families.

“I’ve reached out to a few charities to see if I can donate the clothes and the bins to anyone,” Leitao said. “The (World Trade Company) won’t return my calls to come pick them up, so I’d like to see them go to some use. But the charities all say they don’t have the staff to take care of bins.

“It’s a shame to see someone using a military charity like this.”

Group officials said they are looking into legal action against World Trade Company, but they worry about expensive legal fees.

Thorleifson said consumers need to be more active in researching their charitable giving, making sure that groups receiving any items are performing a public service. Ask for receipts when you donate, she said, to prove that the group is registered as a non-profit.

“People need to treat their charitable donations like you’d treat your investments,” she said. “Too many people just assume that these groups are helping someone.”

Brittain has seen what can happen when there is confusion.

“Somebody is making a profit,” Brittain said of the mislabeled bins, “but it’s not us.”