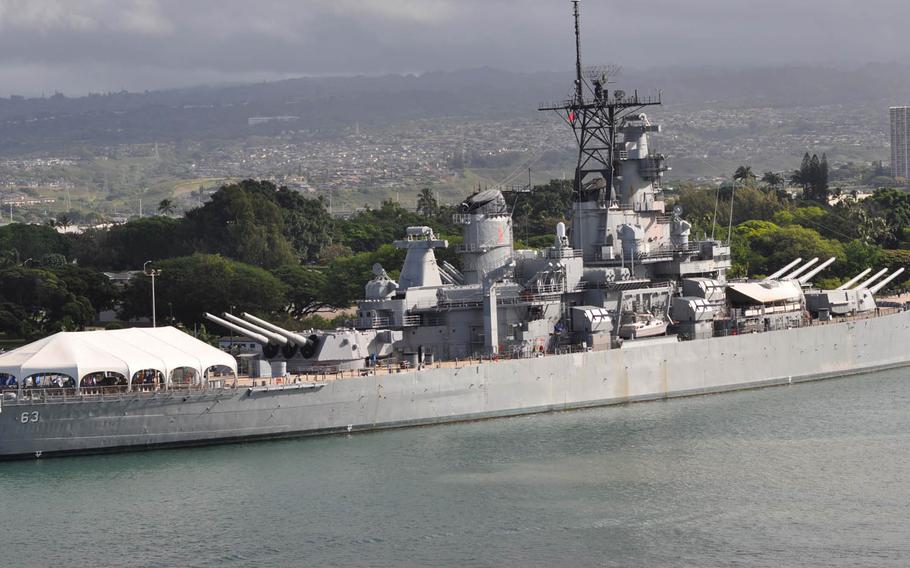 The Missouri Battleship Memorial is berthed at Ford Island in Pearl Harbor and offers visitors a look at a warship of a bygone era. (Wyatt Olson/Stars and Stripes)

The Missouri Battleship Memorial is berthed at Ford Island in Pearl Harbor and offers visitors a look at a warship of a bygone era. (Wyatt Olson/Stars and Stripes) 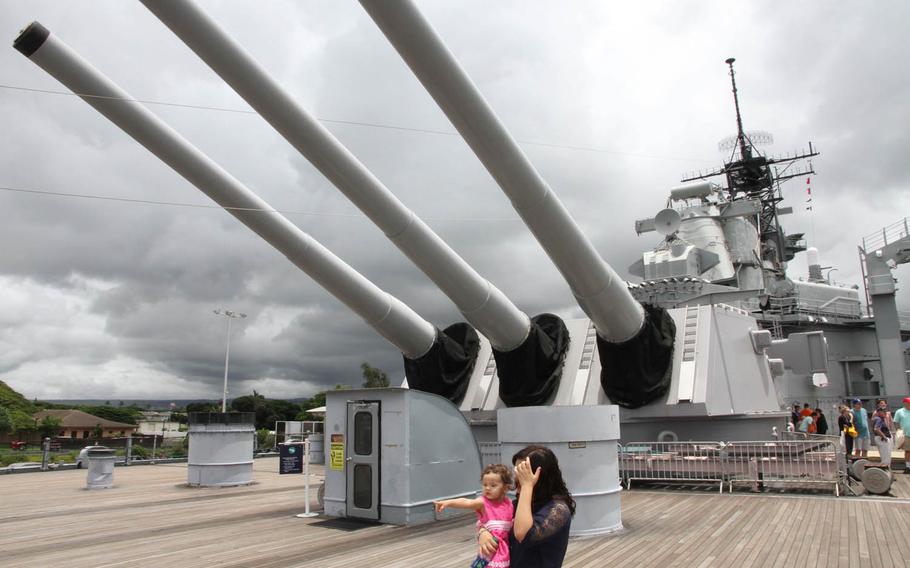 The 16-inch guns aboard the Missouri loom above visitors at the battleship's memorial in Hawaii. For firing, the barrels of the guns would be rotated to shoot over the side of the ship, firing shells up to 20 miles away. (Wyatt Olson/Stars and Stripes) 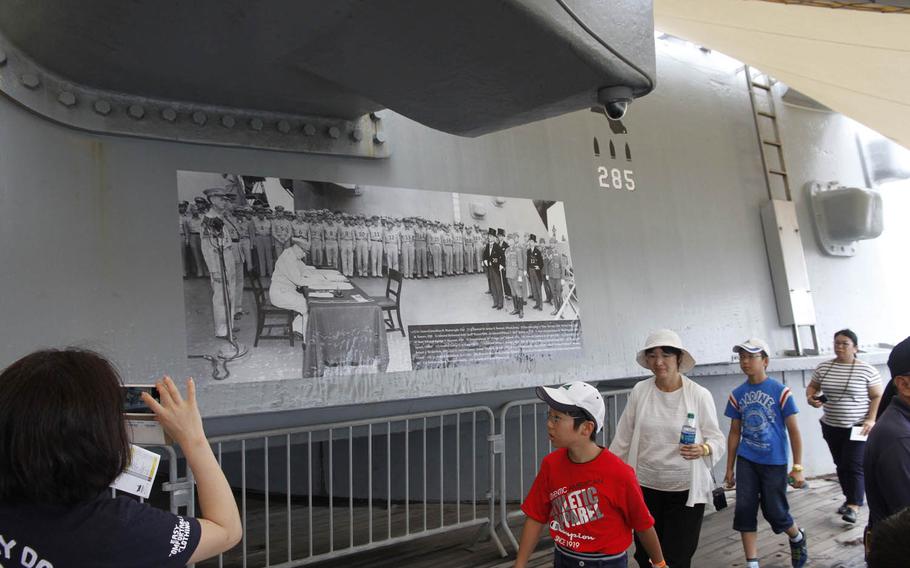 A large photo on the main deck of the Missouri Battleship Memorial in Hawaii shows Gen. Douglas MacArthur and Japanese officials signing the formal surrender documents aboard the ship on Sept. 2, 1945. (Wyatt Olson/Stars and Stripes) 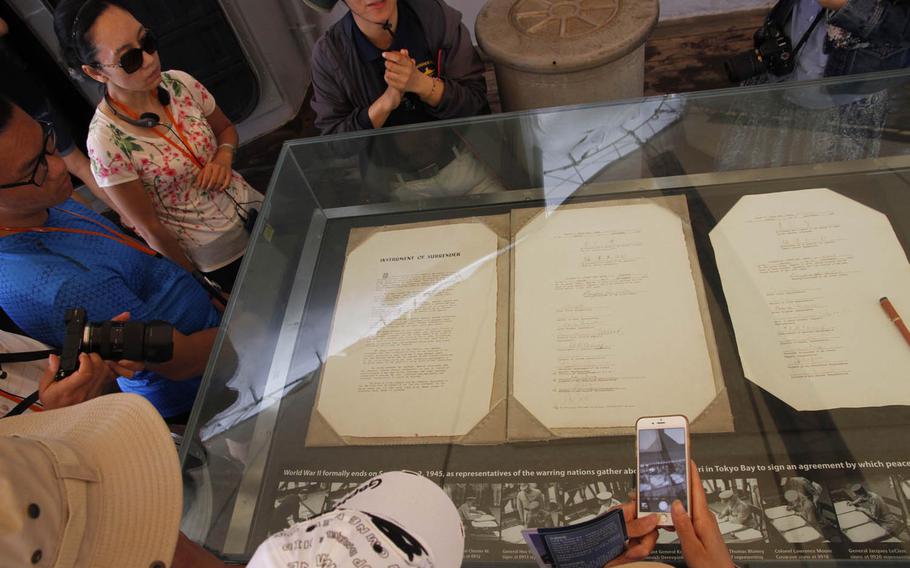 Copies of Japan's formal surrender agreement from World War II are displayed in a glass case near where the original was signed on Sept. 2, 1945, which brought an end to almost five years of war in the Pacific. (Wyatt Olson/Stars and Stripes) 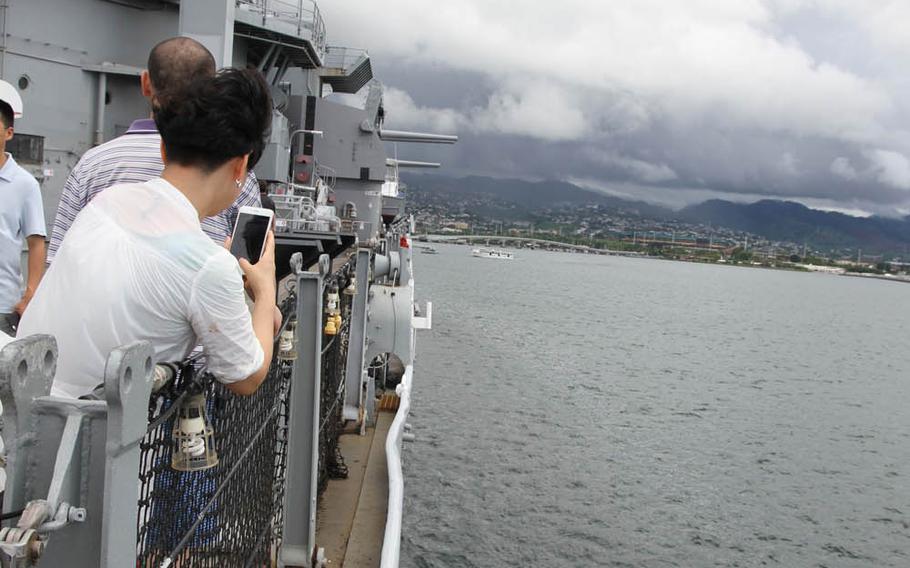 A visitor snaps a photo of the bent gunwale on the Missouri, the only scar remaining from a 1945 kamikaze attack on the ship during World War II's Battle of Okinawa. (Wyatt Olson/Stars and Stripes) 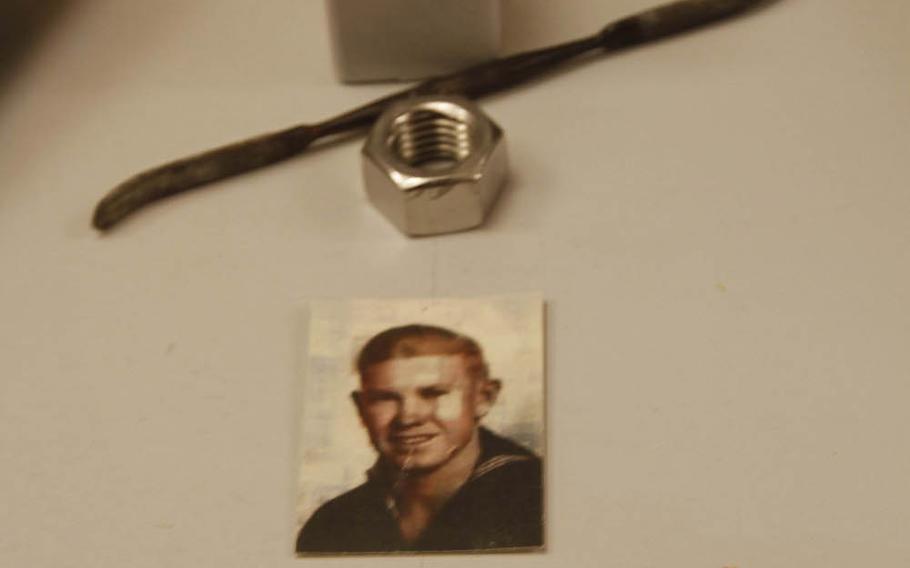 Below-deck galleries on the Missouri display artifacts, mementos and documents from the battleship's early days, including this ring filed down by a sailor from a stainless steel nut during World War II. (Wyatt Olson/Stars and Stripes) 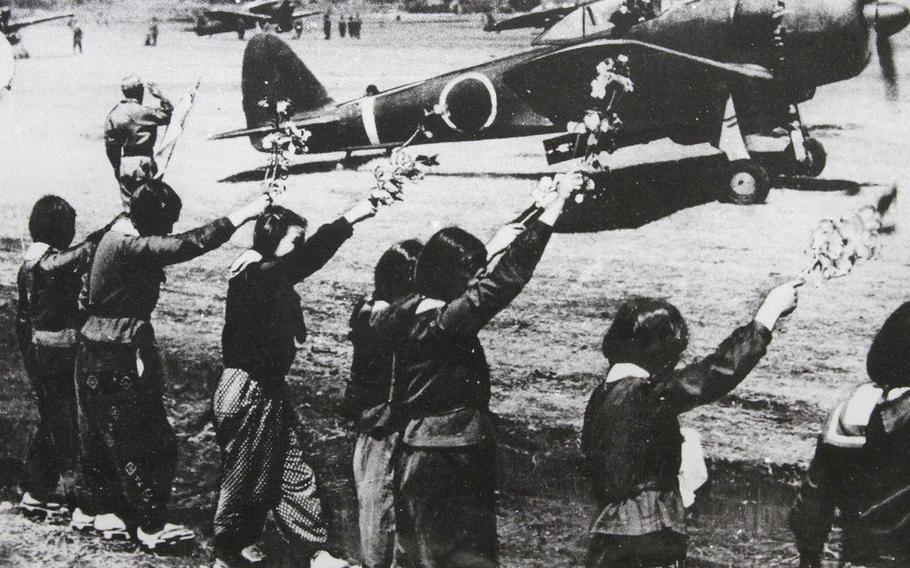 Japanese high school students wave cherry blossoms as a kamikaze pilot prepares for his sortie on April 12, 1945, in this photo displayed in the below-deck museum at the Missouri Battleship Memorial in Pearl Harbor, Hawaii. (Wyatt Olson/Stars and Stripes) 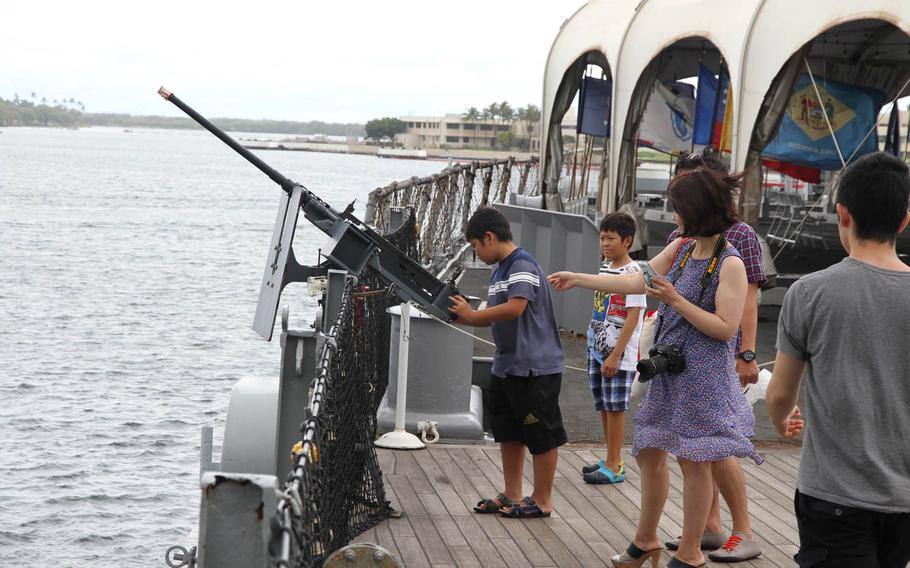 Visitors at the Missouri Battleship Memorial in Pearl Harbor, Hawaii, get a hands-on look at one of the anti-aircraft guns on the ship. (Wyatt Olson/Stars and Stripes)

From the gangway leading onto the USS Missouri, the battleship appears as a hulking, armored dinosaur. Its nine massive cannons rise like the spiny blades of a stegosaurus, and its bow stretches far ahead with the neck of a brontosaurus.

Put to sea for action in 1944, the Missouri truly is from a bygone era of war; it was the last of its kind — the final battleship built by the United States.

Like sharks and crocodiles, which exist today pretty much unchanged from millions of years ago, the Missouri maintained its battle readiness all the way to the Persian Gulf War in the early 1990s. It was decommissioned in 1992, the last such battleship operated by any nation.

Today, the ship lives on as the Missouri Battleship Memorial, which opened in 1999 and is berthed at Ford Island in Pearl Harbor.

It’s designated a National Historic Site and is part of the World War II Valor in the Pacific National Monument. Shuttle buses depart regularly from the nearby Pearl Harbor visitors center.

A visit to the Missouri can take hours, if for no other reason than its immense size. It’s nearly as long as three football fields. During the World War II era, about 2,700 men worked aboard the ship.

Despite its massive guns that rained down artillery during World War II and the Korean War, the Missouri’s biggest claim to fame is its role in peace: it was aboard the ship that Japanese officials signed the formal surrender agreement on Sept. 2, 1945, while it was anchored in Tokyo Bay.

The open deck where the signing took place is now covered with a canopy to protect visitors from the beating sun as they examine the historic spot. An enlarged photo hangs there, showing Gen. Douglas Mac- Arthur, who represented the Supreme Commander for the Allied Powers, signing the agreement. Looking on stone-faced are civilian and military officials of Japan, whose country lay in ruin after years of war.

A copy of the surrender document is displayed under glass. The actual papers were delivered to the office of President Harry Truman the next day. (Historical trivia: Truman’s daughter, Mary, had christened the Missouri when it was launched.)

The Missouri’s decks are covered in thick teak wood planks, a covering that goes all the way back to 1944 and was intended to prevent metal-to-metal sparks that could potentially ignite munitions.

Much of the ship was upgraded in the decades after the 1940s, including the introduction of Tomahawk cruise missiles and Harpoon anti-ship missiles in the 1980s. But an extensive below-deck display shows artifacts, photos and videos of the ship’s early life.

The below-deck route leads through the galley, living quarters and a display on Japanese kamikaze pilots of World War II.

The Missouri still wears the scar of a kamikaze attack, and visitors huddle around the gunwale near the rear starboard side to get a look at it.

On April 11, 1945, as Allied forces fought to take Okinawa, Setsuo Ishino, a 19-year-old Japanese pilot, barreled his Zero toward the Missouri in a suicide mission. The crew fired at the plane, which came in low and hit the ship just below the main deck. The Zero’s wing broke off, flew aboard and started a fire. Ishino’s body was found in the wreckage, and in an unusual act given the animosity of the hard-fought Pacific war, the ship’s commander ordered the pilot to be buried at sea with honors.

The Missouri sustained minimal damage, but the gunwale was bent in slightly from the impact, which remains visible when you look down the ship lengthwise.

Even though the Missouri’s guns have long been silent, they are breathtaking. The nine biggest have 16-inch-wide barrels capable of firing 2,700-pound shells up to 20 miles away. Another 20 5-inch guns could lob shells 10 miles away.

But even as World War II was ending, it had become clear that the age of cannon-laden warships like the Missouri was coming to an end. The nature of sea warfare was shifting to aircraft carriers and, by the 1950s, to missiles. The age of massive artillery bombardment from naval warships far offshore faded, and the Missouri Battleship Memorial is now what’s left of an extinct species.

By car from the Honolulu airport, take the H-1 freeway east (toward Aiea) and then take Exit 15A, labeled “Arizona Memorial/Stadium.” Signs reading “Pearl Harbor Historic Sites” will lead you to the visitors center. By city bus from Waikiki, take Route 42 from Kuhio Avenue. Get off at the USS Arizona Memorial bus stop. The ticket booth for the Missouri is near the entry of the Pearl Harbor visitors center of the World War II Valor in the Pacific. The shuttle bus to the ship is behind the USS Bowfin Submarine Museum.

Mighty Mo Pass: Adults $27, children $13. Includes 35-minute guided tour, 45- to 120-minute audio tour and self-tour of the main, below and above decks. Heart of Missouri Tour: Adults $52, children $25. Includes all the features of the Mighty Mo Pass with an additional 75-minute tour of the ship’s engines and firepower, including hands-on training on the boilers and entering data in the analog computers used to fire its massive guns. No one younger than 10 allowed.

Food and drink kiosks are on the dock beside the Missouri. Water brought aboard must be in clear, containers.

Bags and purses are not allowed on the Missouri; check them at the visitors center.