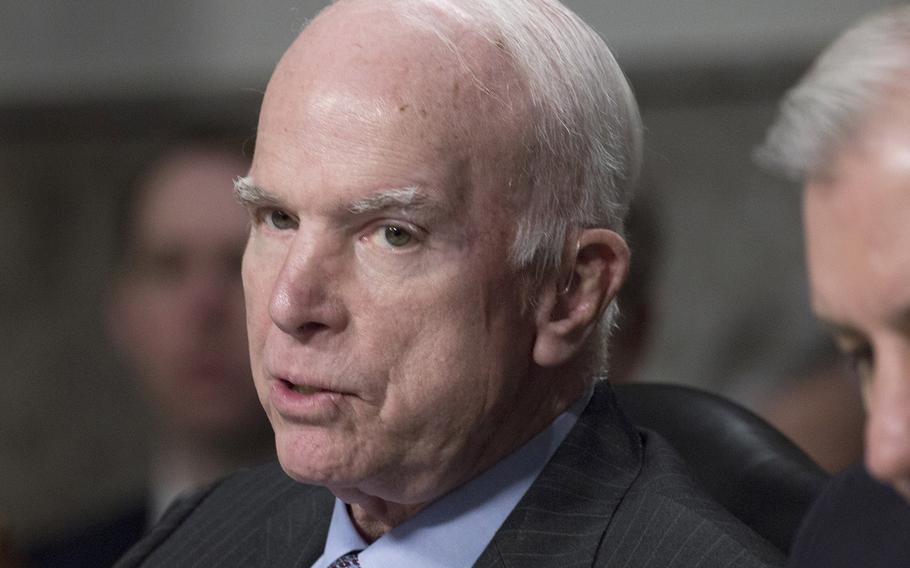 WASHINGTON — A slate of Pentagon nominees faced off with a Senate panel Tuesday about the changes facing military recruiting today, as one key senator warned that confirmation hearings could be stalled again if the Pentagon doesn’t cooperate with new demands for information.

Members of the Senate Armed Services Committee raised questions during a hearing regarding an apparent change in Army recruiting efforts to issue waivers for people with a history of serious mental health illness.

Sen. John McCain, R-Ariz., said his committee shouldn’t have learned about the change through a USA Today report Sunday, and if more information isn’t forthcoming, the Pentagon nomination process could get stalled again.

“I don’t envision a confrontation,” McCain said of another delay over nominees. “But there may be.”

The comments, along with McCain’s plans to investigate the recruiting matter, came after a hearing for three Pentagon nominees vying for top military leadership positions, including Army general counsel.

During Tuesday’s hearing, McCain said that the committee’s recourse is to stop approving nominations if the Pentagon continues to keep defense hawks on Capitol Hill out of the loop on major military concerns.

The standoff between the committee and the Pentagon over nominees is familiar territory under President Donald Trump’s administration.

In July, the committee halted the pace of Trump’s Pentagon nominees testifying, triggering a more than three-month drought. The committee didn’t hear from another slate of military candidates until this month.

In October, McCain said he was holding Pentagon nominations hostage at least in part because of a disconnect between Congress and top military officials. McCain railed that the officials, including longtime friend and Defense Secretary Jim Mattis, were not forthcoming on several major concerns, including two deadly Navy ship collisions this summer, a change in war strategy in Afghanistan under loosened rules of engagement and the ambush last month in Niger that killed four American soldiers.

By late October, the committee saw a turn of events with several public and closed hearings on the Navy ship collisions, war strategy and Niger. A threat of a McCain subpoena on the Niger ambush triggered a personal Capitol Hill visit from Mattis.

With the floodgates reopened, the Armed Services Committee is poised to hear from 17 nominees this month – close to the same number who testified before the panel in the first seven months of Trump’s presidency. The committee has confirmed more than 10 nominees this month.

“We’re talking about getting information, just like we did a couple of weeks ago when we had to find out about Niger,” McCain said.

The committee also considered a new panel of nominees: James E. McPherson as Army general counsel, Anthony M. Kurta as principal deputy undersecretary of defense for personnel and readiness, and Gregory E. Maggs as judge of U.S. Court of Appeals for the Armed Forces.

McPherson said the change in Army recruiting raised questions for him as well, and it would be one of his top priorities should he be confirmed.

“That’s a troubling report,” he said. “I believe history has shown that when you bring in individuals through a waiver process, there’s a risk involved in that, a risk that they might not turn out to be exemplary soldiers. If confirmed, I intend that to make that one of my earlier questions.”

In additional testimony, McPherson said as Army general counsel he would tackle a long list of challenges.

“The Army today faces some very difficult legal issues ranging from personnel programs such as gender integration into the combat arms, the service of transgender soldiers, and the accession of non-US citizens to the need to improve the efficiency and flexibility of the acquisition process and to the scourge of sexual harassment, sexual assault and retribution against those that report such offenses,” he said. But with help of the Army, McPherson said they “will attack these issues with renewed energy and resolve to finding solutions.”

Kurta, who is vying to become principal deputy undersecretary of defense for personnel and readiness, testified that he doesn’t see a recruiting future without members of the Deferred Action for Childhood Arrivals program.

“There are skills that population has that the Department of Defense needs,” he said. “I see a future where the department is able to recruit from that non-U.S. citizen population.”