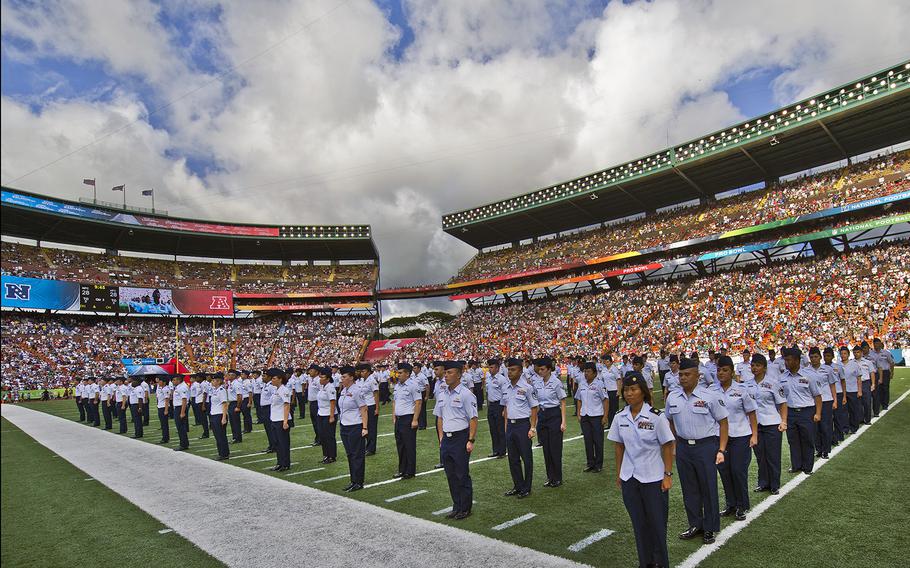 Several hundred airmen assigned to Pacific Air Forces Hawaii stand at attention on the field at Aloha Stadium on Jan. 29, 2012, during the National Football League Pro Bowl halftime show in Honolulu, Hawaii, where the NFL paid tribute to the men and women in uniform. (Michael Holzworth/U.S. Air Force)

Several hundred airmen assigned to Pacific Air Forces Hawaii stand at attention on the field at Aloha Stadium on Jan. 29, 2012, during the National Football League Pro Bowl halftime show in Honolulu, Hawaii, where the NFL paid tribute to the men and women in uniform. (Michael Holzworth/U.S. Air Force) 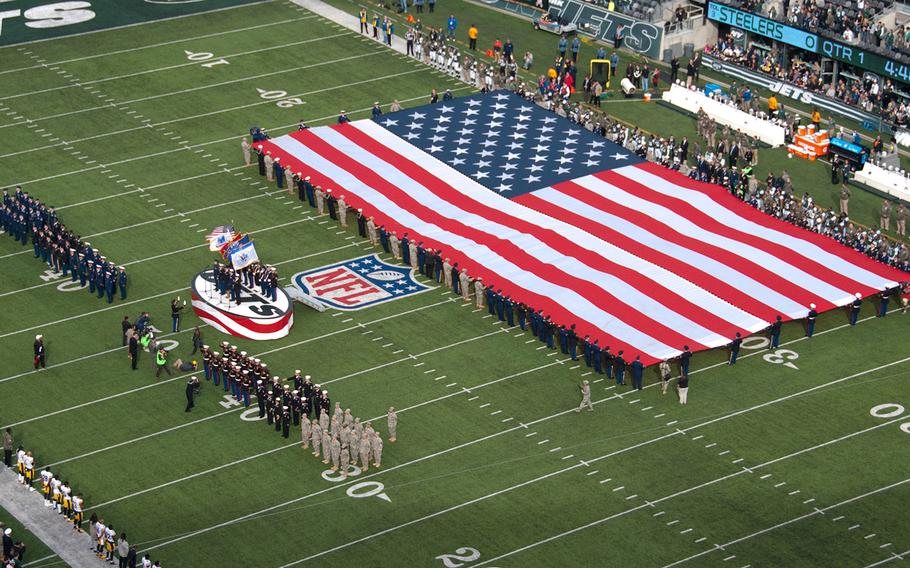 Servicemembers from all branches of the military sing the national anthem at MetLife Stadium in Rutherford, N.J., Nov. 9, 2014. (Andrew J. Moseley/Air National Guard)

McCain, along with fellow Arizona Republican Jeff Flake and Connecticut Democrat Richard Blumenthal, wants to add the prohibition to the Senate’s version of the annual defense authorization act after revelations last month that the league was paid nearly $7 million by the military over the past three years for the tributes.

The payments sparked public criticism and follow other recent problems with the military’s relationship to professional sports.

“Our amendment would put an end to that shameful practice and ask the NFL to return those profits to charities supporting our troops, veterans and their families,” McCain said on the Senate floor.

In one example, the Army National Guard paid the New England Patriots $675,000 for an advertising deal that included bringing a soldier on the field at halftime, he said.

The guard had similar contracts with 21 other NFL teams, according to McCain.

“What makes these expenditures all the more troubling is that at the same time the Guard was spending millions on pro sports advertising, it was also running out of money for critical training for our troops,” McCain said.

In 2014, the Guard was facing a shortfall of more than $100 million in the account used to pay its soldiers and potential delays in training, he said. Last year, the Guard came under fire from Congress and discontinued its sponsorship of NASCAR after spending $88 million over two years on a failed bid to increase recruitment.

Flake said he is still waiting for a full accounting on the military’s sports advertising agreements from the Pentagon.

Despite the controversy, Flake said the NFL tributes were done for the right reasons and warned about discounting the support that league teams give to servicemembers and veterans.

“The problem is when some teams are accepting money to do what has been termed ‘paid-for patriotism’ then it cheapens all the other good work that is done by these sports teams and others,” he said.

The legislation may be added as an amendment to the National Defense Authorization Act, a massive bill that directs military priorities for the coming year. The Senate is expected to pass its version by next week.