McCain: How many more troops needed to retake Mosul, Raqqa this year? 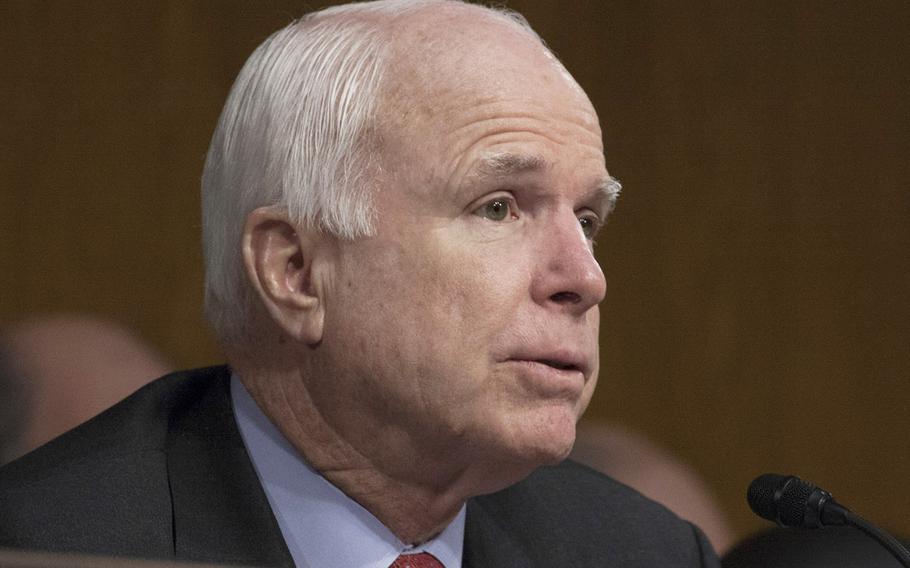 WASHINGTON — Sen. John McCain on Tuesday asked the Defense Department to disclose full tallies of troops deployed to Iraq and Syria — and to say how many more are needed to retake Mosul and Raqqa by the end of this year.

In a letter to the Pentagon, the Arizona Republican charged the Obama administration with making “grudging” incremental troop increases that could lose the war against the Islamic State and sidelining commanders from decisions on the numbers necessary for victory.

Despite criticism from Republicans, the White House has touted its ramped up military operations and recent battlefield progress. President Barack Obama has limited the number of troops in Iraq to 3,870, and the Pentagon has said there are about 50 special operating forces in Syria. Actual numbers are likely to be higher; those figures do not include contractors and servicemembers rotating through for short periods.

“Given your current estimates of available coalition forces going forward, how many U.S. military and civilian personnel would be required in addition to the current force level provided … in order for coalition forces to recapture Mosul and Raqqa by the end of 2016?” McCain wrote to Defense Secretary Ash Carter.

Liberation of Mosul in northern Iraq and Raqqa, the Islamic hardliners’ base of power in Syria, remains the ultimate goal of the White House and the Defense Department. It would bring the United States and its allies closer to winning the war.

But McCain and other Republicans in Congress remain deeply skeptical about the current strategy and troop caps. The chairman of the House Armed Services Committee, Rep. Mac Thornberry of Texas, recently said the “artificial” limits could be endangering deployed servicemembers because they force an over-reliance on short-term personnel.

McCain said Tuesday that the administration’s reluctance to commit more troops echoes the Vietnam War and “risks another slow, grinding failure” for the United States.

“My conversations with military commanders both on the ground and in the Pentagon have led me to the disturbing, yet unavoidable conclusion that they have been reduced from considering what it will take to win to what they will be allowed to do by this administration,” he wrote.

For nearly two years, the U.S. and its coalition partners have struggled to make progress against tenacious Islamic State fighters who seized large swaths of Iraq and Syria. But momentum appears to be turning against the militants in recent weeks with the killing of key leaders and the loss of territory.

U.S. forces are now backing up Iraqi forces in an effort to retake Mosul, which led to the battlefield death of a Marine last month.

The administration has portrayed itself as on the offensive, and military brass has indicated its support for additional troops in the future.

“Look, the president is definitely committed to making sure that we continue to ramp up our efforts against ISIL, and we have been on this upward trajectory for quite some time now,” White House Press Secretary Josh Earnest said Monday, using an alternative name for the Islamic State.

Earnest said the Islamic State has been pushed out of 40 percent of the territory it once controlled in Iraq and has lost strategic locations in Syria that have reduced its ability to operate.

“So we maintain a pretty rapid pace here,” he said.