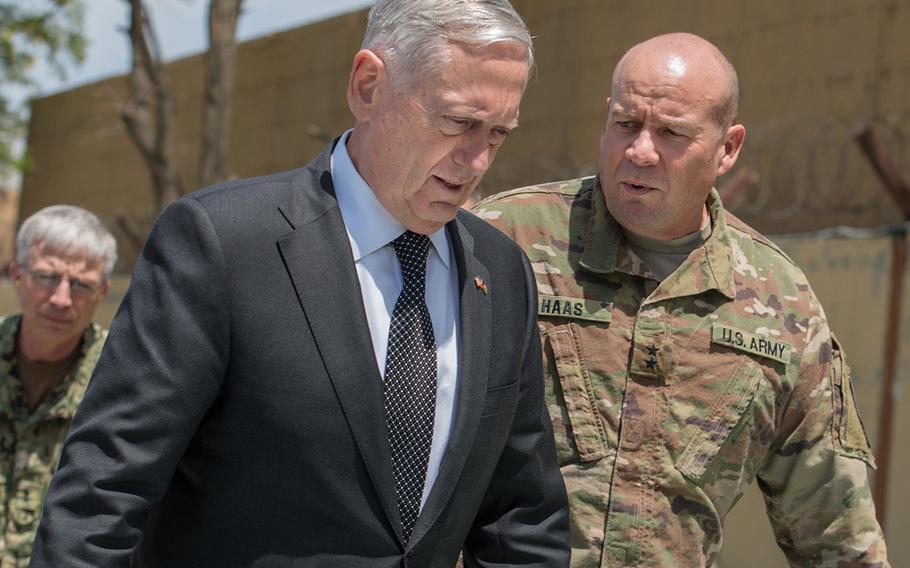 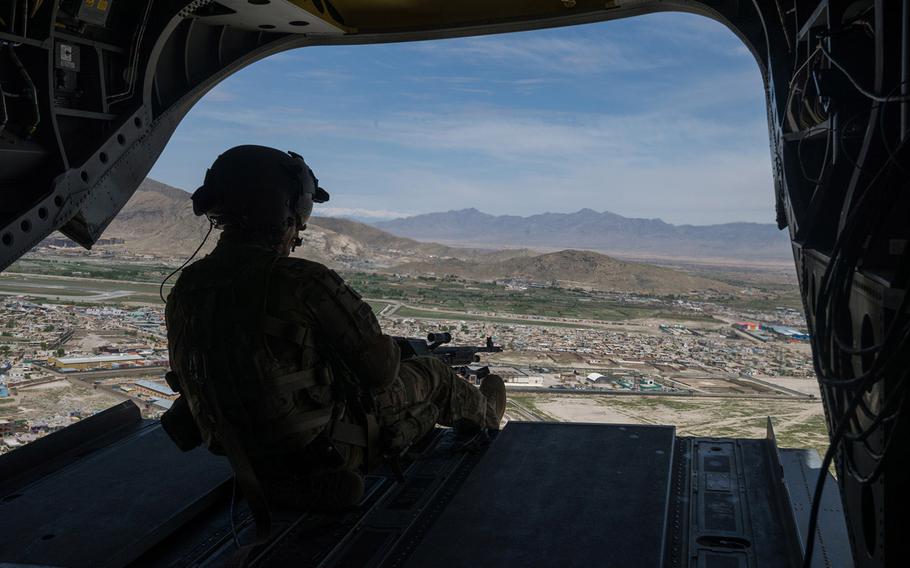 Buy Photo
A U.S. soldier looks over Kabul from the back of a CH-47 Chinook Monday, April 24, 2017. (Corey Dickstein/Stars and Stripes)

KABUL, Afghanistan — Defense Secretary Jim Mattis will soon make a recommendation to President Donald Trump for an updated strategy in Afghanistan that could include deploying more American troops there after visiting Monday with top leaders in the war-torn country.

“I heard directly and at length from [US and Afghan officials] in order to provide my best assessment and advice as we go forward — advice to President [Donald Trump], to the NATO Secretary-General [Jens Stoltenberg] and contributing nations, with whom I coordinate and collaborate,” Mattis said Monday at NATO headquarters in Kabul.

His recommendation could include sending “a few thousand” additional troops to Afghanistan that Army Gen. John Nicholson, the top American commander in the country, told lawmakers in February that he needs to break a stalemate with the Taliban.

But Mattis told reporters Monday that the decisions have not yet been made. He said he owes “some degree of confidentiality” to the White House, which ordered a review of the strategy in America’s longest war, before a decision is made.

Mattis’ visit Monday came just as Afghanistan’s defense minister and top military officer resigned in the wake of a deadly weekend Taliban attack on an Afghan army base.

Ghani had been weighing their removal since March, when the Islamic State mounted an attack on a Kabul hospital that killed some 50 people, said the military official, who briefed reporters traveling with Mattis on the condition of anonymity.

The attack Friday on an Afghan base near Mazar-i-Sharif left 144 Afghan soldiers dead and more than 60 others injured, the official said. The complex coordination and intelligence assessments indicate the Haqqani network was involved, the official added. Haqqani is a Pakistan-based terrorist group with connections to the Taliban.

The assault at the headquarters of the Afghan army’s 209th Corps, which appears to be the deadliest-ever insurgent attack on an Afghan military installation, raises questions about the security forces’ ability to combat the Taliban. Pentagon officials have conceded the group has gained ground in several areas throughout the country in the past year.

Mattis said it also underscores the brutal nature of the insurgents the United States has fought for 16 years.

“It shows why we stand with the people of this country against such heinous acts perpetrated by … this barbaric enemy,” he said.

Friday’s attack alongside the March hospital assault are being seen as shocking intelligence and security failures, with many Afghans furious that the military could have allowed militants to breech two heavily guarded installations. Many Afghans called on the government to hold top officials accountable, and a demonstration has been planned for Tuesday in Kabul, according to local news and social media reports.

Afghan troops’ confidence in their leaders has been sapped by widespread corruption among officers that has left front-line soldiers without the ammunition and other supplies they need to hold off the Taliban, Nicholson has said.

The U.S. official said the top leaders’ resignations, alongside a reshuffling of four Army corps commanders, shows Ghani is committed to holding his defense leaders accountable for their shortcomings.

Nicholson on Monday reiterated his previous assessment of the war effort in Afghanistan as a stalemate. Additional troops could come from the U.S. military or a NATO partner nation, Pentagon officials have said.

There are 8,400 American servicemembers deployed to Afghanistan. NATO partners contribute an additional 4,900 troops to the mission.

The White House has not publicly addressed Nicholson’s request.

“There’s no one nation that’s going to carry all of this,” Mattis said.

Mattis is familiar with the Afghan war effort. A retired Marine general, he commanded troops on the ground in the war’s early days and later oversaw efforts as leader of Central Command, which oversees U.S. operations in the Middle East and western Asia. His visit to Afghanistan’s capital follows the April 16 visit by Trump’s national security adviser, Army Lt. Gen. H. R. McMaster.

Mattis also discussed with American and Afghan officials the ongoing efforts to target Islamic State militants in the country’s east.

The United States on April 13 dropped its most powerful conventional bomb, a GBU-34B Massive Ordinance Air Blast known as the "Mother of All of Bombs," on an ISIS tunnel complex, in the first-ever combat use of the weapon. Afghan officials said it killed some 100 militants.

Nicholson said his decision to drop the bomb was directed singularly at the ISIS threat.

“We were sending a very clear message to ISIS… here in Afghanistan and also ISIS [in Iraq and Syria],” he said. “If they come here to Afghanistan they will be destroyed, and keeping with the secretary’s intent, they will be annihilated.”

Stars and Stripes reporter E.B. Boyd contributed to this report.