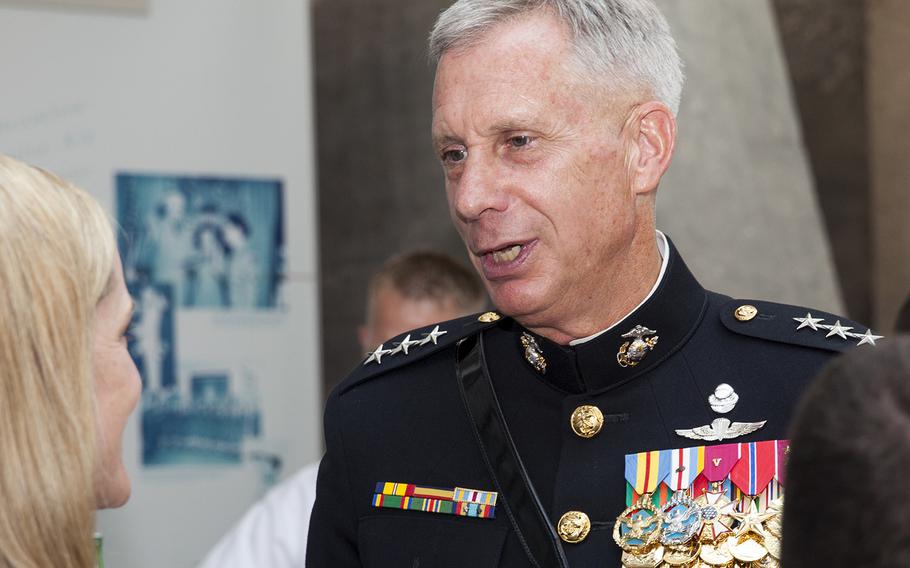 STUTTGART, Germany — A three-star Marine Corps general was tapped Thursday to lead U.S. military efforts in Africa, where he must grapple with the growing Islamic State presence in Libya and widespread instability across much of the continent, the Pentagon announced.

“Over the course of his three decades as a Marine, including service in Operation Desert Storm, leading some of our first troops into Afghanistan after Sept. 11th…, Lt. Gen. Waldhauser has demonstrated through strong military leadership, excellent political-military experience and superb management skills,” Defense Secretary Ash Carter said in a statement announcing the selection.

Waldhauser, one of the military’s longest-serving three-star leaders, has been as a lieutenant general since 2009. He will replace Army Gen. David Rodriguez, who has led AFRICOM since 2013.

Rodriguez is expected to retire after a 40-year military career that included multiple combat deployments to Afghanistan.

For AFRICOM, a mix of militant groups operating across a vast expanse of territory is the top security challenge. In Somalia, the group al-Shabab has suffered setbacks in recent years, but continues to prove resilient and pose a threat to that country’s weak government. In Nigeria, Boko Haram continues to hold large chucks of territory and carry out deadly assaults on a rou-tine basis. Security analysts say the group is the world’s deadliest terrorist organization in terms of body count.

There is also the crisis in Libya, which Rodriguez has described as a failed state. Since the top-pling of strongman Moammar Gadhafi, the country has been in constant turmoil with a mix of militia groups fighting for power and a government unable to seize control. Amid the chaos, the Islamic State group has gained a foothold in the northern city of Sirte and other small towns.

Western leaders now are pinning hopes on a deal that could finally allow the internationally recognized government to return to Tripoli, where a rival government has held sway.

Now, President Barack Obama’s administration must weigh whether the United States and its allies should intensify military operations against Islamic State militants in Libya, where the U.S. has conducted periodic airstrikes and commando raids. Recent Islamic State attacks from Libya into Tunisia, a lone but fragile bright spot in the post-Arab Spring world, is raising the specter of militants stretching across north Africa.

Rodriguez, while stopping short of specifics, has said the United States and its allies should get more involved in efforts against the Islamic State group in Libya, an oil-rich country sitting only 300 miles across the Mediterranean from southern Europe.

AFRICOM, the military’s youngest geographic command, became fully operational in 2008. Ini-tially conceived as a non-threatening command focused on feel-good training missions, the fo-cus over the years has steadily shifted toward more lethal operations.

Still, the focus of the AFRICOM mission is bolster the capabilities of indigenous forces and train troops to carry out operations against militants in places such as Somalia.

A key challenge for Waldhauser will be maintaining readiness to conduct military operations against threats while not being consumed by that task, said J. Peter Pham, an Africa security expert at the Washington-based Atlantic Council.

If AFRICOM’S top priority is defending U.S. interests by force when needed, “a close second pri-ority will be not allowing the demands of the first to cause him to forget that, over the long term, the only sustainable strategy is to empower capable and willing African partners,” Pham said.

“I would insist that this is more than a slogan. It needs to be internalized,” he said. “Strategy implies realistic assessments of objectives and means to achieve them.”

Meanwhile, military efforts in Africa continue to center on intelligence-gathering, with a small network of drone bases running in places such as Djibouti in eastern Africa and Cameroon in the west, where U.S. troops are able to monitor terrorist networks.

Waldhauser, a native of Minnesota who joined the Corps in 1976, has served in various infantry commands over the years. In 2001, as a colonel, he led some of the first forces into Afghanistan as well as Iraq.