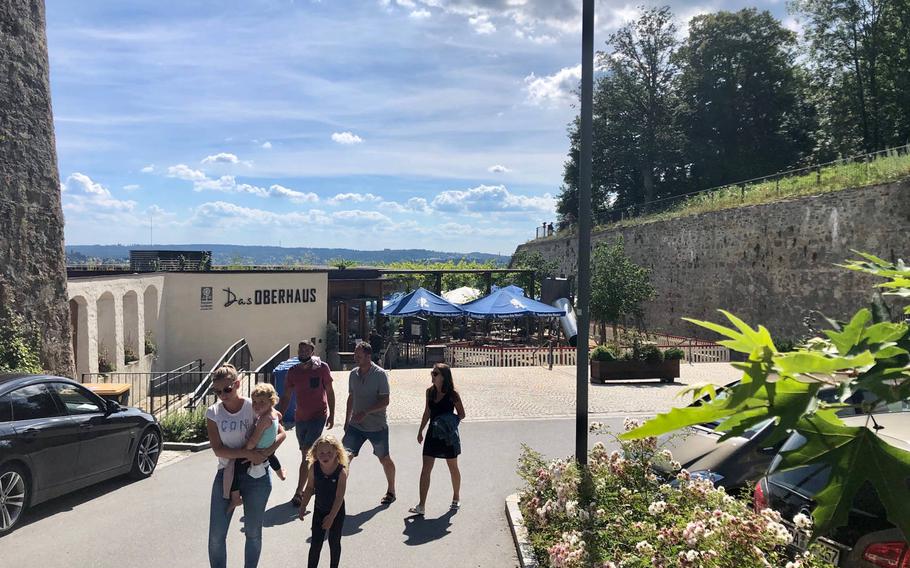 Visitors walk past the entrance to the Oberhaus restaurant, located next to the castle of the same name overlooking Passau, near the border with Austria. (Slobodan Lekic/Stars and Stripes)

Visitors walk past the entrance to the Oberhaus restaurant, located next to the castle of the same name overlooking Passau, near the border with Austria. (Slobodan Lekic/Stars and Stripes) 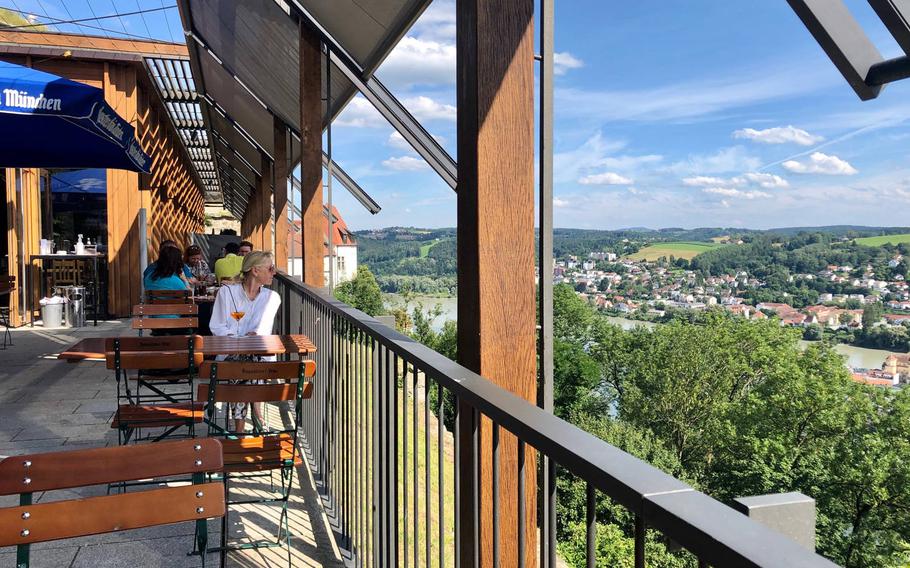 The view of Passau's old center and the confluence of the Inn and Danube rivers from the terrace of the Oberhaus restaurant. (Slobodan Lekic/Stars and Stripes) 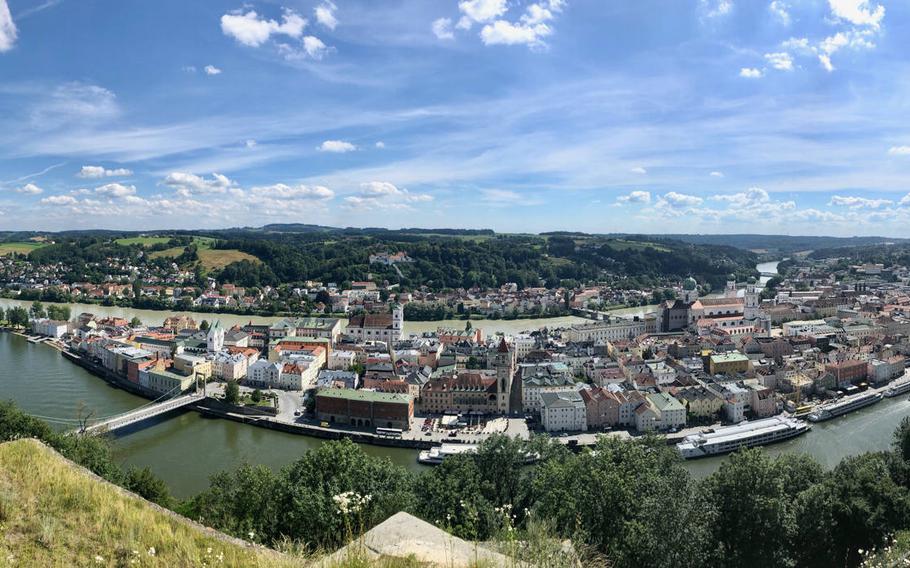 A panorama of the meeting point of the Inn and Danube rivers at Passau in southern Germany, before the Danube crosses over into Austria on its way to the Black Sea. (Slobodan Lekic/Stars and Stripes) 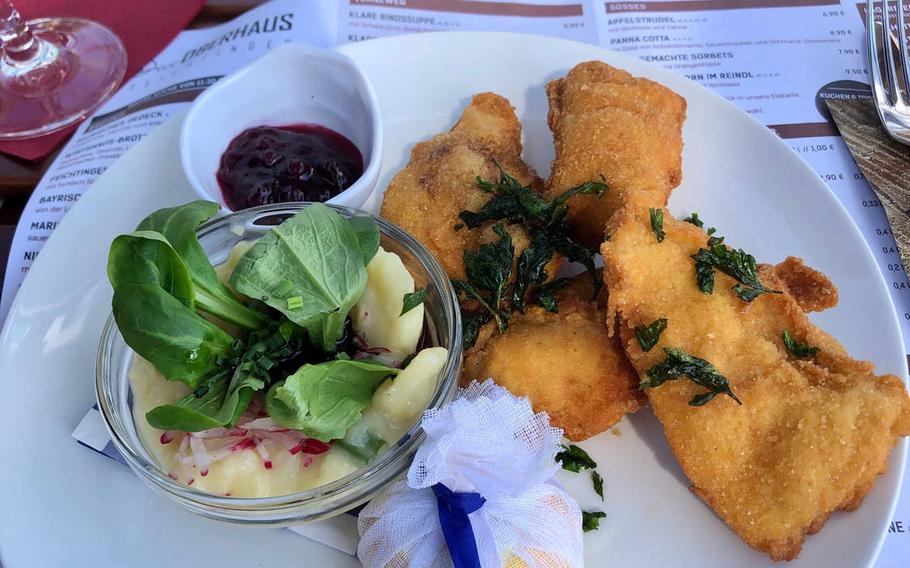 A plate of Buttermilch-Backhaehndl, or buttermilk fried chicken, at the Oberhaus restaurant in Passau, Germany. Filets of marinated chicken breast are breaded and then fried until crisp, and come served with potatoes, salad and half a lemon. (Slobodan Lekic/Stars and Stripes) 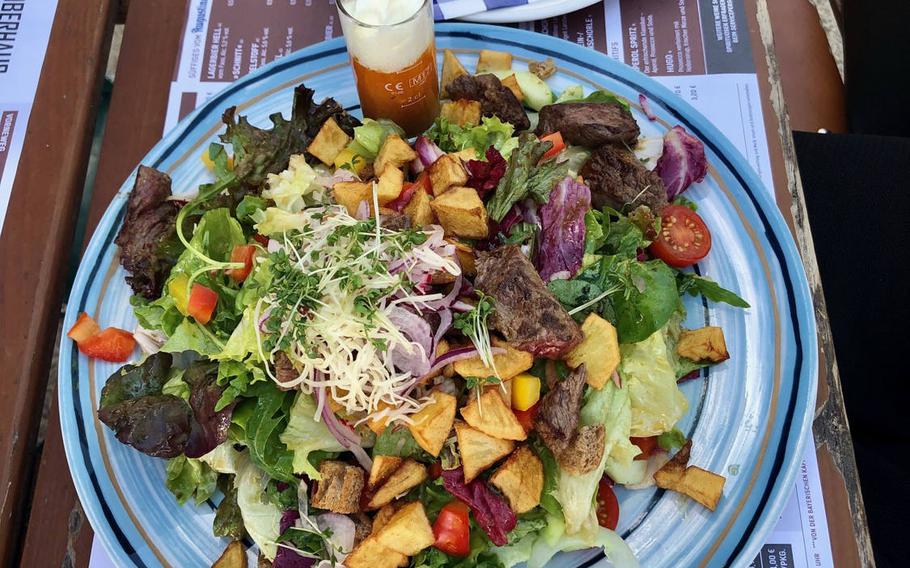 An Augustiner-Salat at the Oberhaus restaurant in Passau, Germany, consists of roast beef, baked potatoes and a beer dressing of vinegar, oil, beer, salt, pepper and mustard. (Slobodan Lekic/Stars and Stripes) 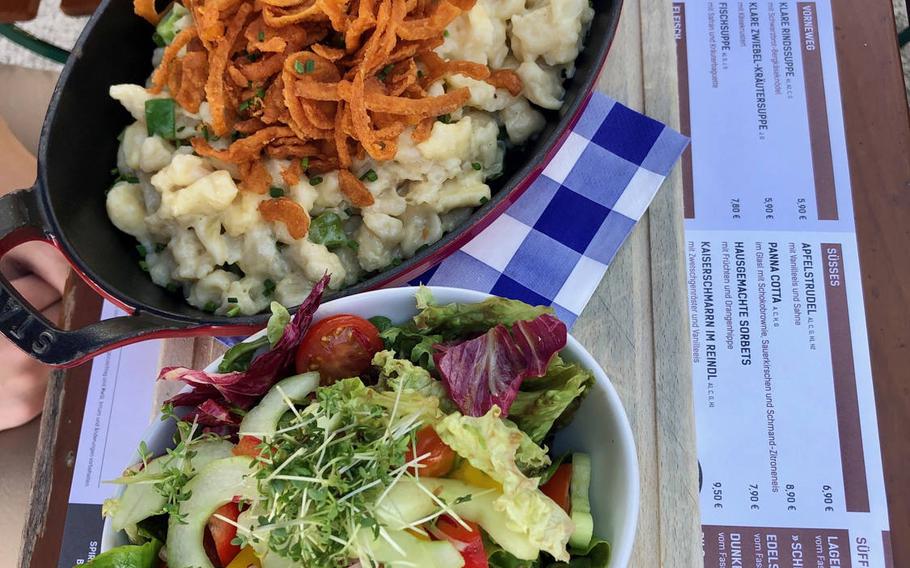 A dish of Kasspatzen, the Bavarian version of gnocchi, served with roasted onions and salad. (Slobodan Lekic/Stars and Stripes)

With the coronavirus restricting Europe-based U.S. service members to the Continent for their summer holiday travels, you may find yourself heading south by car from Germany to somewhere like Croatia or Greece* in the next few weeks. Should you do that, it wouldn’t be a bad idea to pass through Passau and stop for a meal.

The city on the border with Austria has a number of excellent restaurants, but one literally stands out.

It’s called Das Oberhaus, and it’s perched beside a hillside fortress overlooking Passau, which sits at the confluence of the Danube, the Inn and the Ilz rivers. The restaurant takes its name from one of Germany’s largest castles, which is right next door.

Locals seem to like the Oberhaus restaurant, which is always a good sign. In good weather, the garden section, with its jaw-dropping views of the surrounding area, is often packed.

The restaurant offers traditional Bavarian cuisine, and some fairly unusual items, such as river fish. Portions could be described as hefty.

During a recent stopover, I ordered Buttermilch-Backhaehndl, or buttermilk fried chicken, a dish popular in neighboring Austria but rare in Germany. The filets of marinated chicken breast were breaded and then fried until crisp, and came served with potatoes, salad and half a lemon. The dish will set you back 13.40 euros.

Another popular main course in summertime is the Augustiner-Salat, which included roast beef, baked potatoes and a beer dressing, consisting of vinegar, oil, beer, salt, pepper and mustard. It costs 14.40 euros.

Or there are Kasspatzen, the German version of gnocchi, served with roasted onions and salad, for 11.40 euros.

The menu also includes lake trout, perch, pike and other fish. For appetizers and desserts, there are Bavarian favorites such as Frankische Bratwuerstel (smallish sausages) or Apfelstrudel (apple strudel).

The waiters, mostly students from the local university, are friendly and chatty and all seem to speak fluent English.

The restaurant also has a pleasant indoor section with large windows running the length of the side facing Passau. It’s generally empty on hot summer days but very busy when the weather doesn’t allow seating on the terrace.

Das Oberhaus is accessible from downtown Passau on foot via the very steep hill to the citadel, or by car — up the same hill but much faster and easier.

A main course, with a soft drink or beer or a glass of wine will set you back about 20 euros per person and won’t leave you too tired to continue on your drive south — or north, if you’re heading back home.

*To avoid countries with high coronavirus infection rates. Greece can be reached by passing through Croatia, Romania and Bulgaria.lekic.slobodan@stripes.com

Directions: From Grafenwoehr, take the A93 to Regensburg and then the A3 towards the Austrian border. From Kaiserslautern, Stuttgart and Wiesbaden, take the A6 to the A3.