Located on the Moselle river, Cochem is famous for its wine, vineyards, scenery A sign in front of a wine tavern in Cochem, Germany, announces it offers Federweisser and Zwiebelkuchen. The former is a partially fermented young wine, while the latter is an onion tart. They are traditionally served in the autumn during the grape harvest season. (MICHAEL ABRAMS/STARS AND STRIPES)

A sign in front of a wine tavern in Cochem, Germany, announces it offers Federweisser and Zwiebelkuchen. The former is a partially fermented young wine, while the latter is an onion tart. They are traditionally served in the autumn during the grape harvest season. (MICHAEL ABRAMS/STARS AND STRIPES) 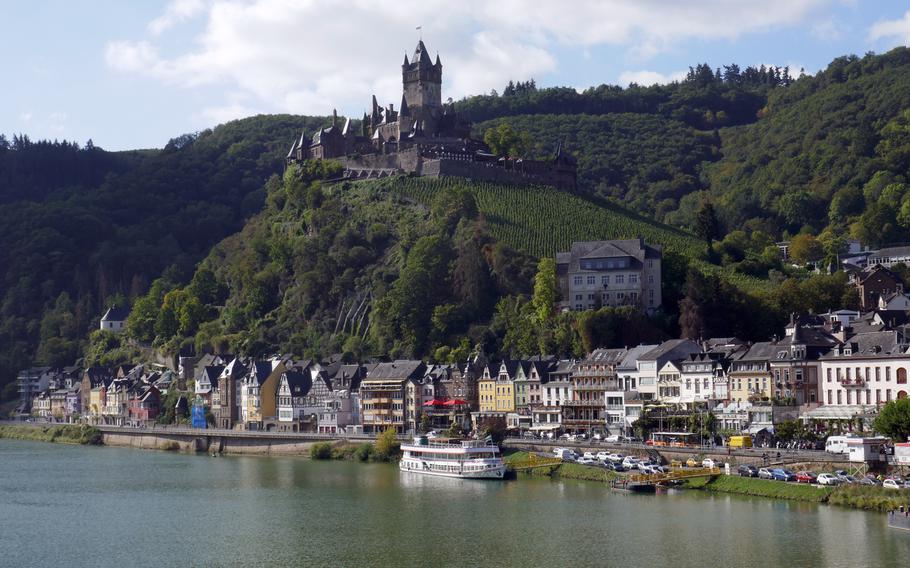 The Reichsburg Cochem towers over the city and the Moselle River. Parts of the castle date back to the 11th century and the town is a popular tourist destination. (MICHAEL ABRAMS/STARS AND STRIPES) The colorful marketplace in Cochem, Germany. The city is a popular tourist destination for sightseeing, boat rides on the Moselle River, wine tasting and for bikers and hikers. (MICHAEL ABRAMS/STARS AND STRIPES) 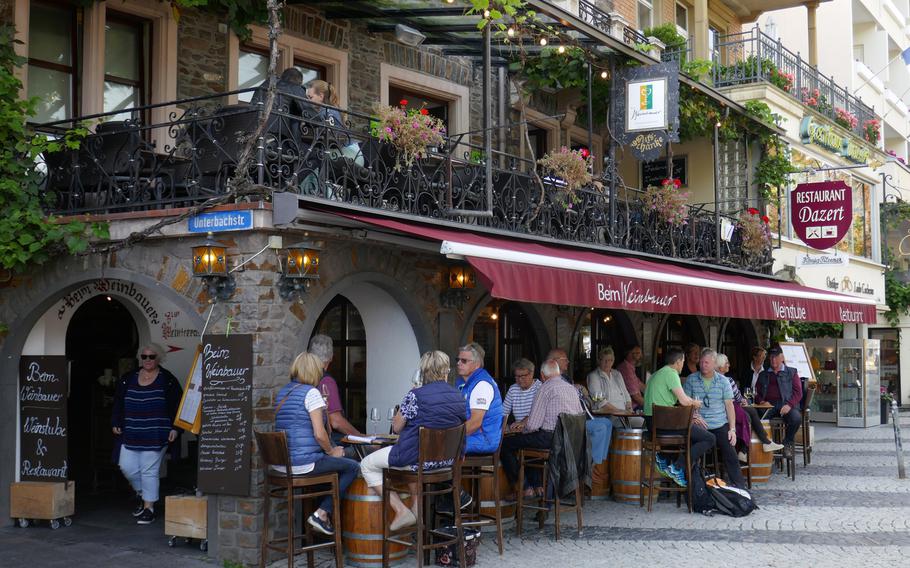 Visitors to Cochem, Germany, taste the wine at wine tavern near the Moselle River. (MICHAEL ABRAMS/STARS AND STRIPES) A view of Cochem, Germany, from the chairlift station above the city. At left, people have a look from the viewing platform at the Pinner Cross, the Reichsburg towers over Cochem at right. (MICHAEL ABRAMS/STARS AND STRIPES) 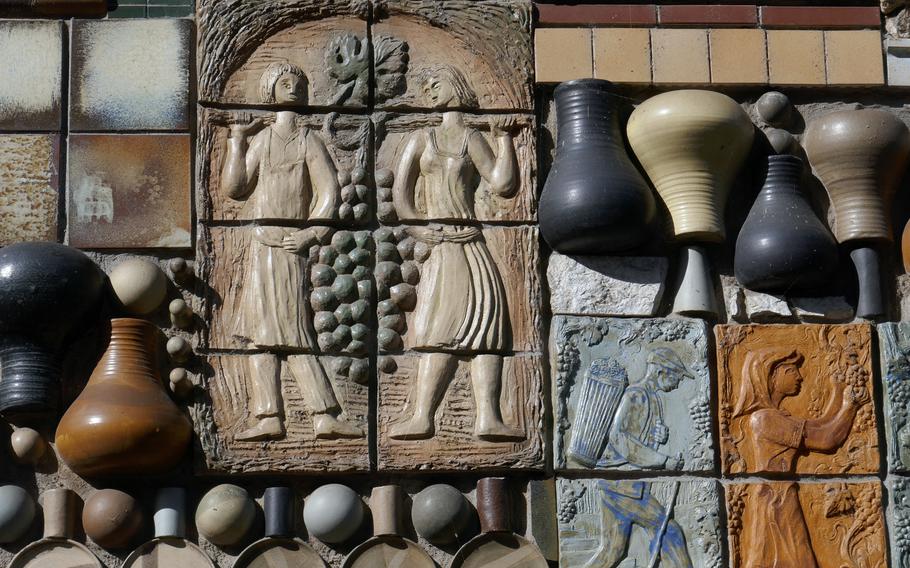 Cochem, on the Moselle River, is famous for its wine and vineyards. Here tiles on a house has many grape harvest motifs. (MICHAEL ABRAMS/STARS AND STRIPES) 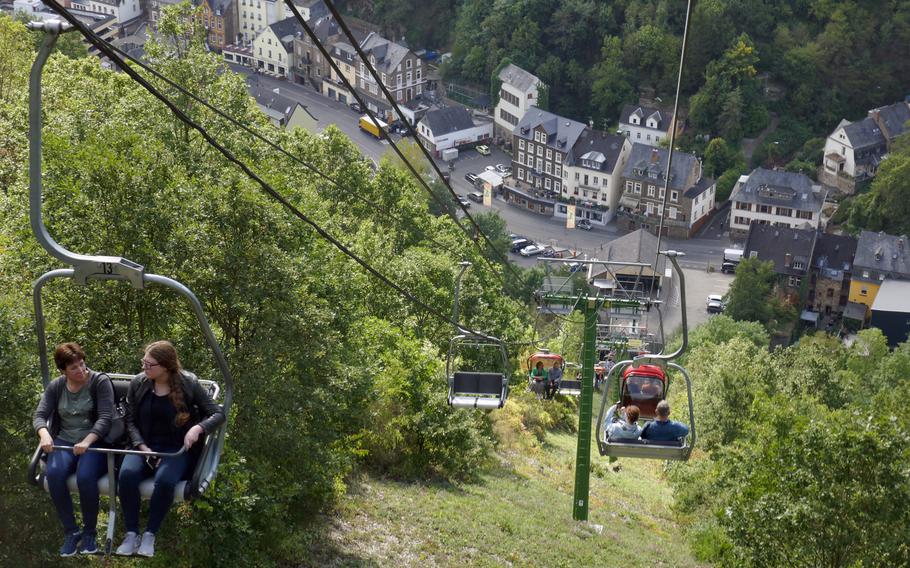 The Cochem chairlift takes you up to a plateau both the town, where there are good views of the Moselle River valley. (MICHAEL ABRAMS/STARS AND STRIPES) A stone knight looks out from the Reichsburg high over Cochem, Germany, and the Moselle River valley. The castle was first built in the 11th century. (MICHAEL ABRAMS/STARS AND STRIPES) 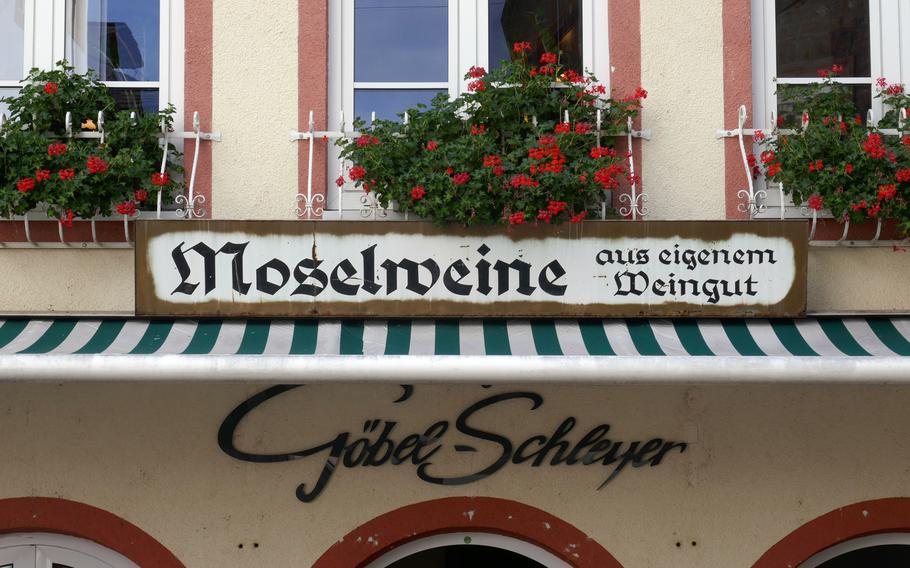 Cochem and Moselle River valley is know for its vineyards and the wine produced there. Many shops in town sell the local products. (MICHAEL ABRAMS/STARS AND STRIPES) Vineyards lead up to Reichsburg Cochem on the Moselle River. Parts of the castle date back to the 11th century and the town is a popular tourist destination. (MICHAEL ABRAMS/STARS AND STRIPES)

A journey along the Moselle river brings you past many sights worth seeing. One of them is the town of Cochem.

Sitting on both sides of the river that flows through France, Luxembourg and Germany, it is nestled against steep hills lined with vineyards.

Although the German town’s prehistory is lost in the shadows of time, it was first mentioned in a document in 866. Much of Cochem’s medieval history was influenced by the Reichsburg, a mighty castle, first built in the 11th century, that towers over the city.

The noble families that ruled from there led the town and castle through the ups and downs that mirror much of the history of the area.

Sieges, marauding knights, the plague, the Thirty Years War and French invasions were among the low points of the town’s history, but over the years it also became a center of crafts and trade.

And in the early 18th century the first tourists began arriving, often English artists who captured the romanticism of the Moselle valley.

The stream of tourists has not stopped, and today Cochem is the center for tourism on the Moselle with hiking and biking trails, boat cruises, viticulture and the sights of the town.

It’s a short but in some spots steep walk up to the castle. From its walls there is a wonderful view up and down the Moselle valley.

Unfortunately, the castle can only be seen on a guided tour and because we had other places to go and see, we skipped it on this visit.

The town is full of narrow cobblestone lanes. The marketplace is surrounded by half-timbered houses, cafes and restaurants, with a statue of St. Martin topping a fountain as its centerpiece.

For another great view of Cochem and the Moselle valley, ride the Cochemer chairlift, which takes you up to an altitude of 850 feet. From the restaurant just above the lift station and from the nearby Pinner Cross, an outcrop towering over the valley, you can appreciate the grandeur of castle, town and river. You can ride back down on the chairlift or hike a little more than a kilometer back to the city.

Once there, take a break at one of the many taverns along the river and sip a glass of Mosel wine.

DIRECTIONS: Cochem is on the Moselle River in western Germany. It is about a 50-mile drive from Spangdahlem, 75 miles from Wiesbaden and 100 miles from the Ramstein/Kaiserslautern area.

TIMES: Any time is fine, but good weather is best for sightseeing, hiking, biking or boat rides. The castle has daily English-language tours every hour between 10:30 a.m. and 4:30 p.m. from early March to early November. The chairlift operates from 10 a.m. to about 4 p.m. from late March to mid-November.

COSTS: Parking costs about 8 euros for a day, but some meters only go for two or five hours, so be sure to consider how much time you want to spend in town. And be sure to have change, as the meters take only coins. A castle tour costs 6 euros for adults and 3 euros for children 6 to 17. A family ticket is available for parents with 2 to 5 children for 16 euros. The chairlift costs adults 4.90 euros one way and 6.90 euros roundtrip. For children 4 to 14 years of age it is 1.90 euro and 2.90 euros respectively, and a family ticket is 17 euros for parents and 2-4 children.

FOOD: There are plenty of restaurants in town. Cochem is a good place to try traditional German food and taste Mosel wine.