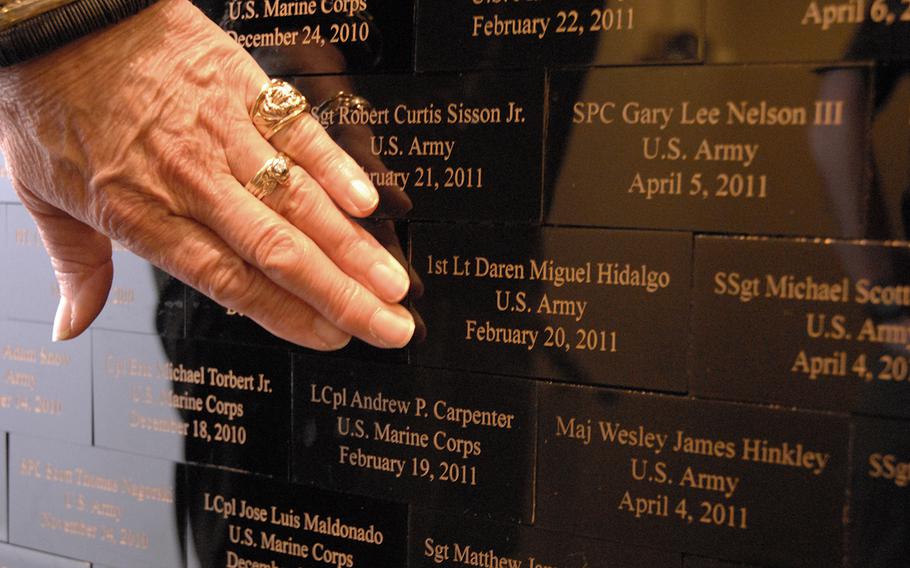 Buy Photo
Yanny Mahoney touches the name of a soldier she knew who was killed in Afghanistan. The tribute wall at the Marines' Memorial Club and Hotel in San Francisco has the names of all the more than 6700 servicemembers killed in combat since 9/11. (Megan McCloskey/Stars and Stripes)

Buy Photo
Yanny Mahoney touches the name of a soldier she knew who was killed in Afghanistan. The tribute wall at the Marines' Memorial Club and Hotel in San Francisco has the names of all the more than 6700 servicemembers killed in combat since 9/11. (Megan McCloskey/Stars and Stripes) 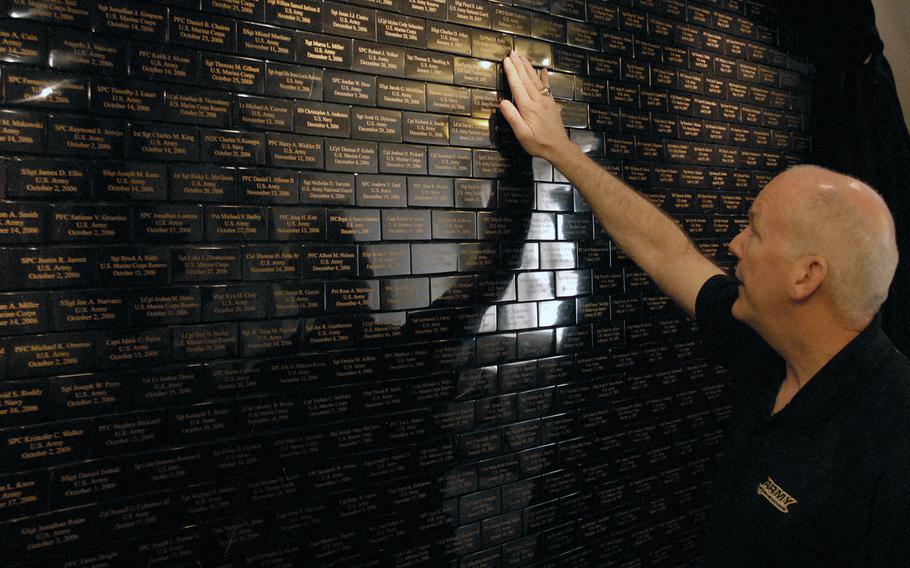 Buy Photo
Retired Col. Steve Mahoney touches the name of the fallen colonel with whom he served. He was visiting a tribute wall for servicemembers killed after 9/11 in San Francisco in May. (Megan McCloskey/Stars and Stripes) 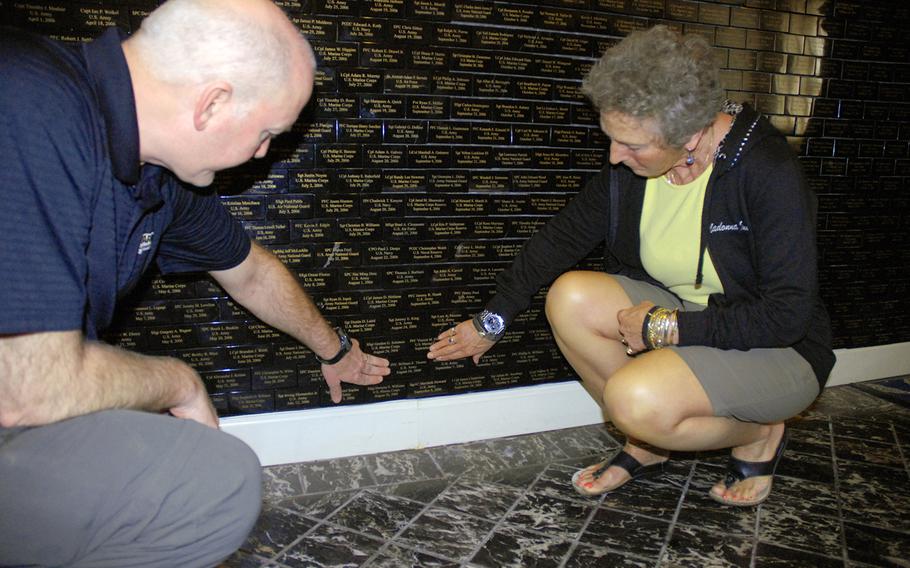 Buy Photo
Ret. Col Steve Mahoney and his wife Yanny Mahoney bend down to touch the name of a young soldier who was killed when he served under their son, an Army lieutenant at the time. The Mahoney's visit the memorial to post-9/11 fallen troops at the Marines' Memorial Club and Hotel in San Francisco a few times a year. (Megan McCloskey/Stars and Stripes) 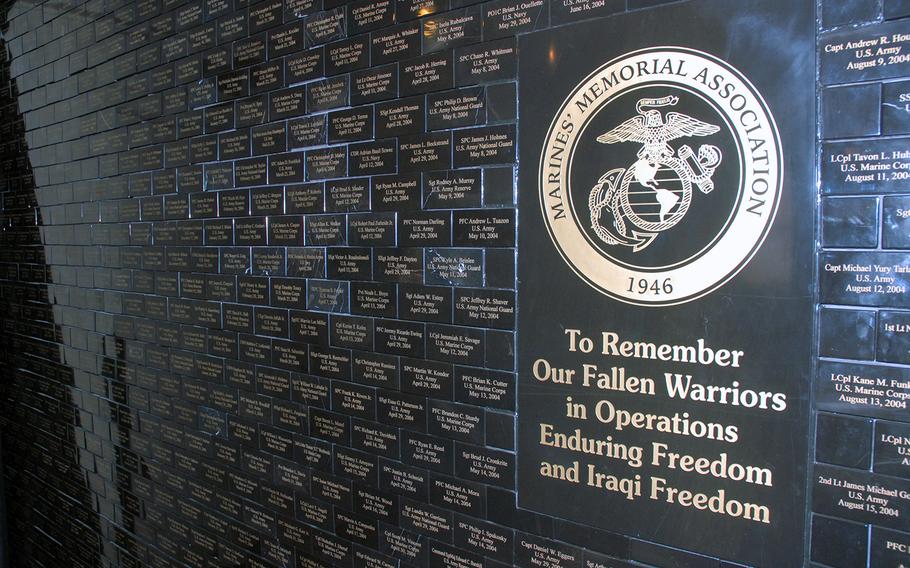 Buy Photo
In 2012, the Marines' Memorial Club and Hotel had to start putting names of those killed in combat after 9/11 on a planter because they had run out of wall space in on the mezzanine they dedicated in their honor. The club started the memorial in 2004 and didn't anticipate that names would still be going up nearly 10 years later. (Megan McCloskey/Stars and Stripes) 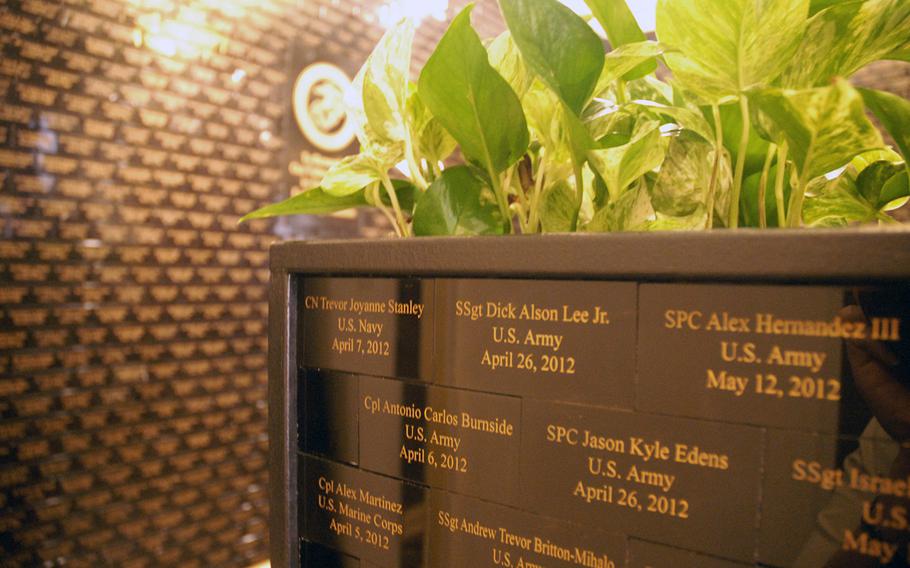 The first wall of the memorial to servicemembers killed after 9/11 at the Marines' Memorial Club and Hotel in San Francisco. The club started the tribute in 2004 and had to move to three additional walls and then a planter in the middle of the room to accommodate all the names of the fallen troops from the Iraq and Afghanistan wars. (Megan McCloskey/Stars and Stripe) 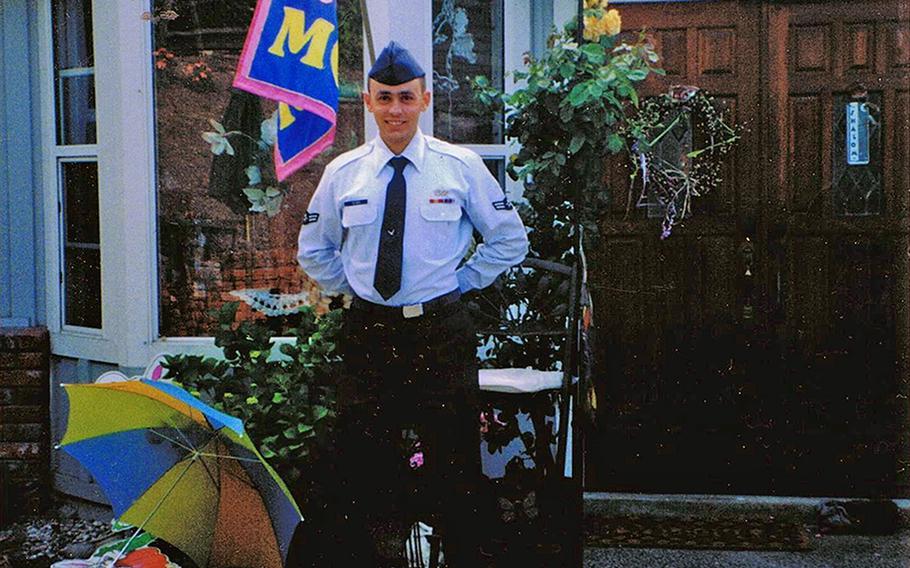 Senior Airman Jonathan Vega Yelner on Mother's Day in 2004. He was killed in Afghanistan on April 29, 2008. His mother, Yolanda Vega, often visits the tribute wall that bears his name and all the others killed in combat post 9/11 at the Marines Memorial Club and Hotel in San Francisco. (Courtesy of Yolanda Vega) 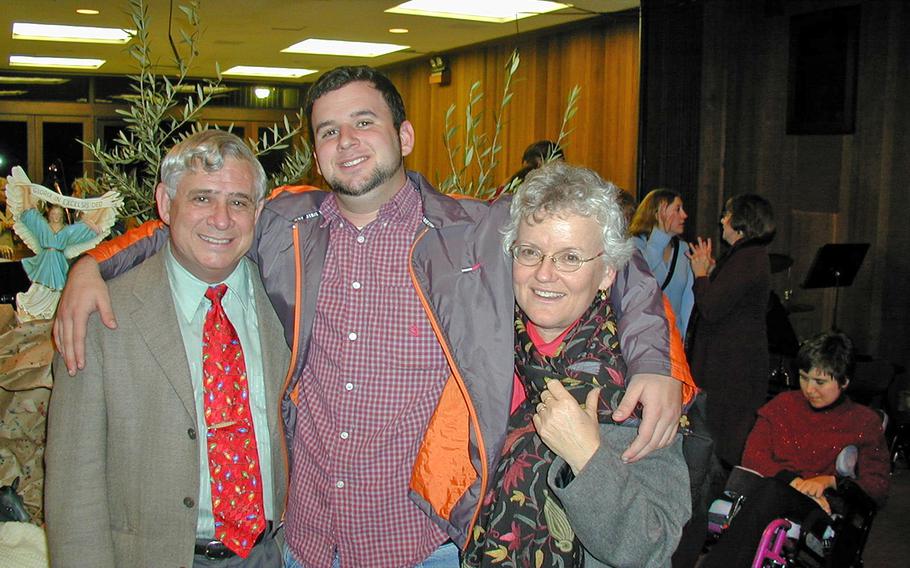 Bill and Mary Shea with their son Tim at Christmas in 2002, shortly before Tim enlisted in the Army. Cpl. Tim Shea, with the 3rd Battalion, 75th Ranger Regiment out of Ft. Benning, Ga., was killed in Iraq on Aug. 25, 2005. (Courtesy of Mary Shea)

SAN FRANCISCO — Midway through 2005, the tribute wall here to honor those killed in combat after 9/11 was completely full with the names of the dead — with no end to the wars in sight.

The Marines’ Memorial Club and Hotel started cataloging the names in 2004, when casualties in Iraq surged, pushing the intensity of the conflict far beyond early expectations. Dedicating a wall on the 10th-floor mezzanine, this generation’s tale of sacrifice began in the top lefthand corner with Master Sgt. Erander E. Andrews, killed in Afghanistan on Oct. 10, 2001. That shiny, black marble brick was followed by another and another, all engraved with names in gold, and by June 27, 2005, with Chief Warrant Officer Steven E. Shepard, the bricks had reached the bottom righthand corner.

To accommodate the continuing flood of names, the hotel built a long adjacent wall, enclosing the open mezzanine. It began with Spc. Rafael A. “TJ” Carillo Jr., killed on one of the deadliest days of the Iraq war — June 28, 2005 — when 22 died.

So the hotel used the adjoining staircase to build a third wall for the tribute. Two and half years later, with the last tile marking Tech Sgt. Adam Kenneth Ginett’s death on Jan. 19, 2010, it was full.

So they moved to a fourth wall, and after two more years of counting the dead, the brick for Sgt. Dennis Paul Weichel Jr., killed March 27, 2012, finished it off.

The entire mezzanine was covered with more than 6,350 black marble bricks carrying the names of the fallen troops. The hotel was out of space, but the Afghanistan war raged on — 11 years later.

So they built an L-shaped, 4-foot-tall planter in the center of the room to place bricks bearing more names.

“When we started this almost 10 years ago, we had no idea how long the wars would last,” general manager Michael Allen said.

The memorial has turned out to be a marker of not just the casualties, but of the uncertainty of war.

Like all memorials commemorating those killed in battle, this one embraces the “notion of not forgetting, of recognizing that the sacrifice is a real thing, flesh and blood,” said Gold Star parent Bill Shea.

But unlike those created after a conflict ends, providing only the chance to look back on history, this one is a living memorial, growing along with the death toll. It presents a visual record of the human cost of war as it’s being paid — a powerful opportunity for reflection while the country can still change the path it has chosen.

That immediacy is important to Yolanda Vega, whose son, Senior Airman Jonathan Antonio Vega Yelner, was killed in Afghanistan on April 29, 2008.

“We’re not waiting until later on for another generation to say what happened” with the wars, she said, noting it was a decade before a monument was erected for Vietnam veterans.

Even before the elevator doors finish opening on the mezzanine, the impact of the tribute wall hits: all one sees in each direction, from floor to ceiling, are names.

“It takes your breath away,” Allen said. “The totality of the price we pay to be in these conflicts escapes us on a daily basis.”

The real time tribute — names go up within 60 days of the death — takes what is an abstract concept to most Americans and makes it concrete.

“It grabs you that it’s very real,” Mary Shea said. “As people, we’re very tactile and visual. With the wall, there it is. It’s right in front of your eyes.”

“Tim was number 1,875 killed,” Bill Shea said. “When we first saw the wall, there were probably less than 2,000 names on there. It only covered part of the room, and now we go there and they circle the whole room.”

“Every year I tell myself: ‘It’s time to stop. The wall needs to stop,’” Mary Shea said. “We can deal with it. We don’t want anybody else to have to deal with it.”

There’s room for about 600 more names.

“We’re really hopeful with the drawdown, it’s coming to an end,” Allen said.

The Marines’ Memorial Association, which runs the hotel and has spent about $1.6 million on the tribute, is going to replace the planter with three separate stations for names in the center of the room this year. If needed, they’ll expand the floor to make more space.

‘We’re all in this together’

Anyone can go into the lobby and take the elevators up to visit the memorial, but with it tucked away in the hotel rather than in a public space, it’s a quiet, meditative place. Black curtains are pulled closed along each of the walls at night.

“It’s close to being like a chapel,” Mary Shea said. “It is kind of that sense of intimacy.”

The bustle of the hotel and its top floor restaurant seem far away in the narrow room. Little distracts from the reverent feel; the only decorations are the American flag and those of each service that stand among the greenery in the black planter. There’s an iPad to look up the photo and story of each person killed, and a guest book for visitors to write messages.

“I am honored to see my husband’s name next his fallen brothers.”

“Tomorrow is my daughter’s birthday.”

The Sheas spend about 20 minutes at the memorial each time they visit. Like most, they don’t often sit on the narrow bench by the planter, but stand close to the cool, smooth wall, which reflects the image of the viewer in the sheen of the black bricks. Their son’s name is about knee high.

“These old bones try to crouch down and touch it,” Bill Shea said. “The closer we can get the better it is.”

Retired Marine Maj. Gen. Mike Myatt, who is the president of the Marines’ Memorial Association that runs the hotel, said one day he saw a man holding up his wife so she could touch her son’s name. There are also ladders for people to get close to names up high.

Retired Army Reserve Col. Steve Mahoney and his wife, Yanny, visit from Illinois a couple times a year. They touch five names on the wall and make donations to the association in each of their names.

“It means something to know people are remembered,” Mahoney said as he found the name of the colonel he served with in Iraq.

The association’s club was started in 1946 at the end of World War II to honor the sacrifices of those who fought and has 25,000 veteran members from all branches. Annual dues pay for active-duty servicemembers to stay at the centrally located hotel for $79 per night, far below market price for the city. The club has museum exhibits for each war America has fought. Before 2001, the average age of the association’s members was 72. That’s dropped significantly with the new generation of vets.

“This young man down here,” Yanny Mahoney said, pointing toward the bottom of the wall, “he’d been to our house. He served under our son when he was a lieutenant.”

The chronological order provides context for each death. Each brick has the rank, name, branch of service and date of death.

“We get to see who Tim died with, how many before and immediately after,” Mary Shea said.

Their son’s name is on a couple of different monuments, including a Ranger memorial at Fort Benning, but being memorialized with everyone who was killed — seeing the whole picture — makes this the most important place for them, Bill Shea said.

“I’m very, very happy my son is remembered there,” his wife said. “That he isn’t anonymous.”

Vega cried the first time she saw it, but “they were tears of appreciation. They weren’t sad tears at all,” she said. “It was validating.”

“There are so few people who have skin in the game that, you know, when a fatality happens with a young soldier, Marine or sailor, people around us just don’t get it,” Mary Shea said. “We’re all in this together whether you realize it or not.”

“You pay your taxes, you vote, you serve on juries and when it’s important to you, you go to war. We’re losing that collective identity.”

She wonders: “What sense do we have of what’s going on?”

The tribute wall makes you “look at things as they are,” she said, “and for that I’m grateful.”