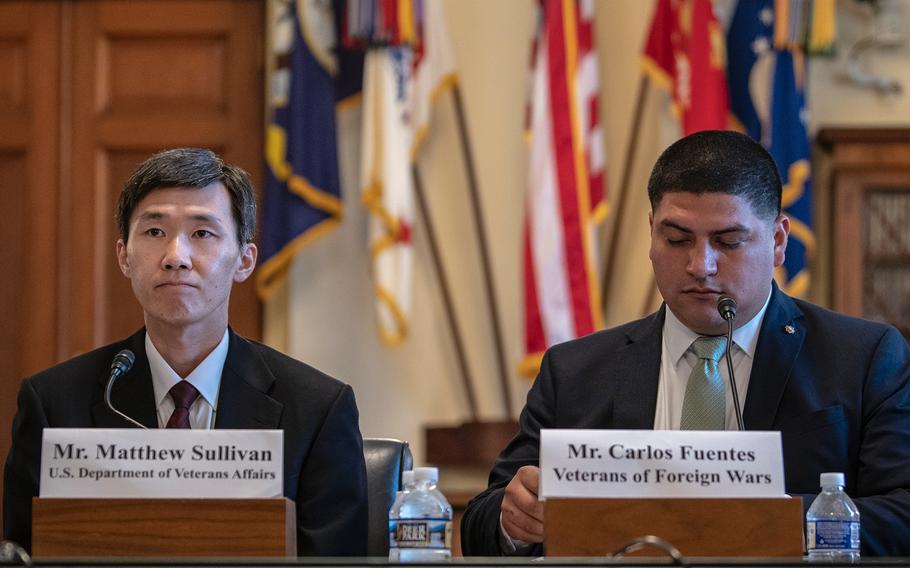 Matthew Sullivan, a deputy undersecretary with the VA’s National Cemetery Administration and Carlos Fuentes, director of the Veterans of Foreign Wars, prepare to testify before the House Committee on Veterans' Affairs on Wednesday, Sept. 5, 2018, on Capitol Hill in Washington. (Carlos Bongioanni/Stars and Stripes)

Matthew Sullivan, a deputy undersecretary with the VA’s National Cemetery Administration and Carlos Fuentes, director of the Veterans of Foreign Wars, prepare to testify before the House Committee on Veterans' Affairs on Wednesday, Sept. 5, 2018, on Capitol Hill in Washington. (Carlos Bongioanni/Stars and Stripes) 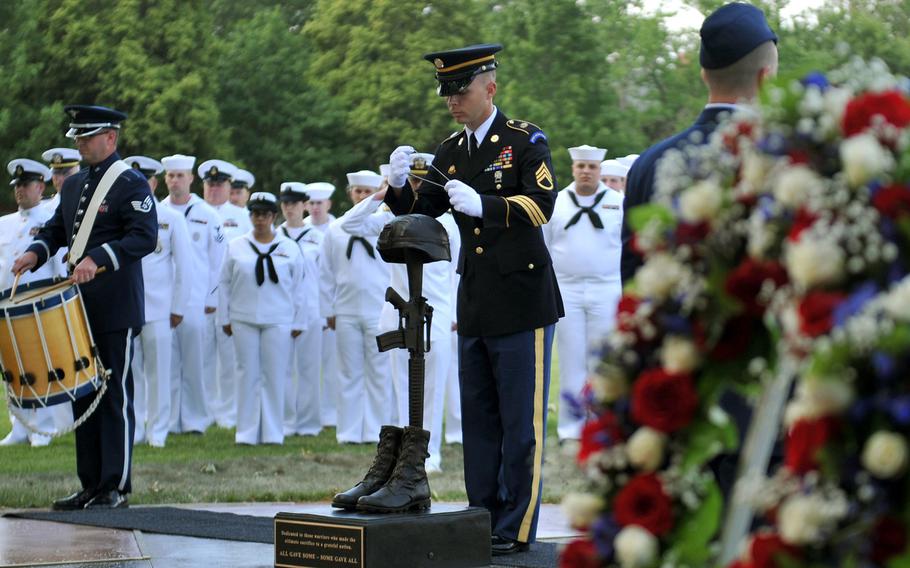 A dog tag chain is placed around the statue on the Fallen Warrior Memorial May 24, 2012, at Offutt Air Force Base, Nebraska. (Jeff W. Gates/U.S. Air Force)

Battlefield crosses, made up of a dead soldier’s rifle, helmet, boots and dog tags, are used to mark a death in combat. A stone depiction of one was removed from the Ohio Western Reserve National Cemetery last September, sparking outcry from local veterans and elected officials.

The Department of Veterans Affairs, which manages national veterans’ cemeteries, said at the time that VA policy prohibited realistic-looking depictions of firearms.

Displays were also removed from cemeteries in Illinois and Michigan, said Rep. Jim Renacci, R-Ohio, during a hearing Wednesday of the House Committee on Veterans’ Affairs subpanel on disability assistance and memorial affairs.

“This misrepresentation of policy ignores the special place of the battlefield cross occupies in the hearts of our veterans," Renacci said.

The battlefield cross in Ohio was put there by a local VFW chapter, members of which were “in dismay” when the memorial was removed, the VFW said Wednesday in a statement.

"To VFW members, all of whom have deployed into harm's way in a foreign land, the battlefield cross has a special significance," VFW director Carlos Fuentes said. "It is used to honor and remember our brothers and sisters who have made the ultimate sacrifice."

In response to their complaints, the VA returned the displays later in 2017.

Renacci, however, said he thinks a rule permitting depictions of battlefield crosses should be put into law so VA officials in the future can’t decide to remove them again. He introduced H.R. 4312, the Fallen Warrior Battlefield Cross Memorial Act, to allow them.

“As the removal last year demonstrated, policies and their interpretations can change,” Renacci said. “Without the force of law, there are no permanent protections in place.”

The VA is opposed to the bill.

Matthew Sullivan, a deputy undersecretary with the VA’s National Cemetery Administration, said the legislation would prevent the VA from establishing standards for what the battlefield crosses would look like. The VA typically has oversight about the size and design of memorials placed in national cemeteries.

“It raises questions of VA’s ability to establish design standards to ensure consistency in appearance and maintenance of monuments,” he said.

The bill must be considered by the full House Committee on Veterans’ Affairs before going for a vote on the House floor.