Legal ‘fistfight’ expected when transgender ban gets to court 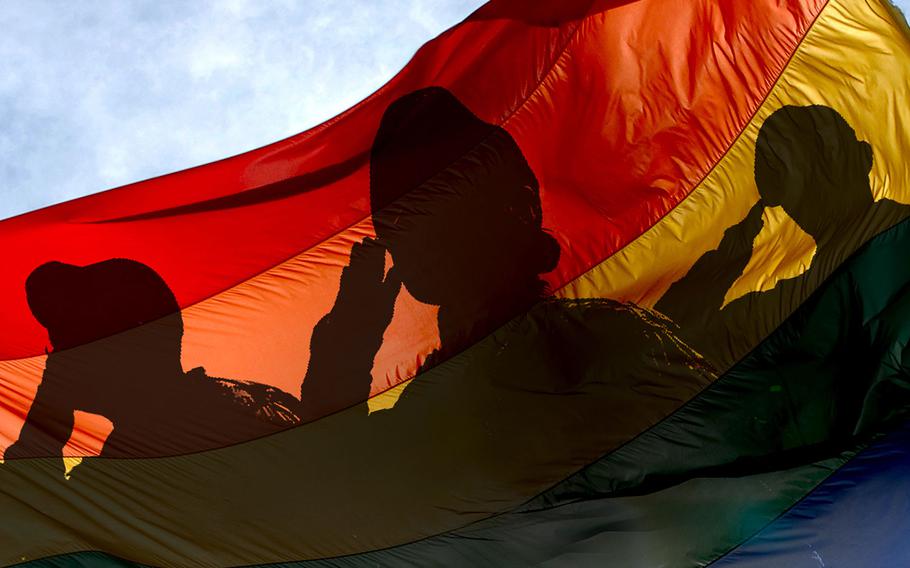 Both opponents and supporters of President Donald Trump’s ban on transgender personnel in the military might agree that his abrupt policy shift was handled clumsily, even cruelly, considering that it targets individuals serving the nation honorably and with a special kind of courage that minority status often demands.

But transgender personnel can expect a “fistfight” in federal court as they seek to reverse the ban, arguing it violates their constitutional rights to due process and equal justice, said attorney Eugene R. Fidell, who has decades of experience with military personnel legal issues and teaches military law at Yale Law School.

The Obama administration lifted the ban on transgender members serving openly in June 2016 after months of study by a work group of military leaders, interviews with currently serving transgender personnel, and findings from think tank RAND Corp. that their serving openly would not significantly affect force readiness, unit morale or military costs.

That background will complicate but won’t necessarily defeat legal arguments from the Trump administration for reinstating the transgender ban, Fidell said.

“It’s one thing if a court is looking at a personnel qualification issue on a clean slate, but it’s not a clean slate. The last administration went to some length to develop and support the policy change they made,” said Fidell.

That only ensures there’s a “horse race” ahead in trying to persuade courts that transgender personnel pose a risk to readiness. Federal judges, after all, “tend to be deferential” toward the commander in chief and military leaders on what authorities they say they need to recruit, train and sustain effective fighting forces.

“Having litigated against various parts of the Pentagon for most of my adult life,” Fidell said, “I’ve seen one judge after another, who are otherwise sound people, fade when the government comes in and says, ‘The moon is made of green cheese.’ Many federal judges will say, ‘If you think it’s cheese, it’s cheese!’ ”

In this case, Fidell predicted, “the government will argue there’s a judgment call involved, and a new administration is entitled to make a new judgment.”

“If that’s the argument,” he added, “the judge should insist on a cogent explanation, supported by probative evidence, that justifies the change. No one should expect federal judges to roll over on a case like this.”

Two lawsuits have been filed challenging the ban. The first complaint was brought to the U.S. District Court in Seattle by the rights groups Lambda Legal and OutServe-SLDN on behalf of three transgender servicemembers.

“Dripping with animus,” it argues, “the ban and the current accessions bar violate the equal protection and due process guarantees of the Fifth Amendment and the free speech guarantee of the First Amendment. They are unsupported by any compelling, important or even rational justification.”

The other lawsuit was filed in a U.S. district court in Maryland by the American Civil Liberties Union and six current transgender servicemembers. David M. Zionts with the law firm Covington & Burling is a lead attorney on that case.

In a phone interview, Zionts said the issue is “equality before the law.”

Trump ignored the Defense Department’s own “very rigorous, systematic review of evidence” that transgender personnel can serve openly without negatively affecting readiness, unit cohesion or military costs, he said. Without any evidence, Trump claimed a poor effect on all those areas justifies reinstating the ban.

His “actual motivations,” the lawsuit contends citing news reports, “were purely political, reflecting a desire to accommodate legislators … who bear animus and moral disapproval toward men and women who are transgender, [to gain] votes for a spending bill that included money to build a border wall with Mexico.”

When “the government wants to discriminate and treat one class of people different, it needs a good reason,” Zionts said. “This is an extraordinary case where the military has already refuted the reasons President Trump is relying on.”

As a result, he said, “we’re confident that when a court looks at this, it will see a decision that was ill-considered, not based on evidence and doesn’t come close to satisfying the burden that would be necessary to justify singling out a group of Americans who are serving their country and are qualified to do so.”

Trump first announced the ban via tweets July 26, which caught Defense Secretary Jim Mattis and the Joint Chiefs off guard. They declined to act on the tweets, advising the White House the military needed to see a policy directive. Trump signed a presidential memorandum Aug. 25.

In it, Trump said it was his “judgment” the Obama administration “failed to identify a sufficient basis” to end the decades-long ban on transgender personnel serving openly or to conclude their service “would not hinder military effectiveness and lethality, disrupt unit cohesion or tax military resources.”

Trump said the issue demands further study. He therefore would reinstate the ban until he receives a recommendation from Mattis that persuades him it should be lifted. Meanwhile, the military must not access transgender personnel into service nor fund or provide sex reassignment surgeries, except to protect the health of individuals who already have begun a course of treatment.

Part of the implementation plan he ordered, Trump said, should determine by March 2018 what to do about transgender members now serving. Until then, no action is to be taken against them.

The lawsuits argue that transgender members already are being harmed by Trump’s order to resume institutional discrimination. It affects how they are perceived and limits opportunities for promotion, training and desired assignments.

The lawsuit in Maryland advises the court “we’re going to ask for urgent relief,” Zionts said, although that motion hasn’t yet been filed. Without it, the government has 60 days, until late October, to answer the complaint.

Mattis said he would carry out Trump’s directive in consultation with the secretary of homeland security, who is responsible for the Coast Guard. The study and implementation plan, Mattis said, will focus on “what is best for the military’s combat effectiveness” and rely on a “panel of experts” pulled from the two departments who will “bring mature experience, most notably in combat and deployed operations, and seasoned judgment to this task.”

Meeting with journalists Aug. 31, Mattis declined to say if he personally supported a ban on transgender servicemembers, suggesting the president wants his recommendation only after more study.

“The president gave me the time to look at this. And obviously he wanted me to do something [more deliberate] or he would have said, ‘I want something done tomorrow.’ He’s told me what he wants in theory, in broad terms, and now he’s leaving it up to me,” Mattis said.

“President Trump issued a directive imposing a ban on service by transgender men and women, denying currently serving members necessary medical care, and closing the door to new enlistees who meet every qualification to serve,” he said. “Nothing Secretary Mattis has said changes the urgency of stopping this unconstitutional policy.”

Lawyer Fidell said he believes the military can “permit and facilitate service by transgender personnel” without affecting readiness or a worrisome spike in medical costs. RAND forecast added health costs of $4 million to $8 million a year.