Leave some time for wading through the expansive menu at Cheesecake No. 122 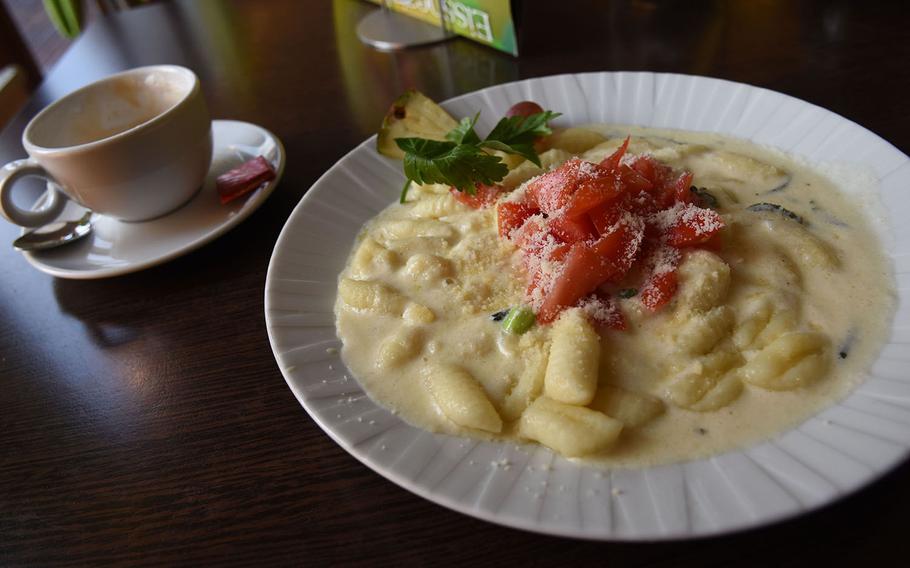 Buy Photo
Gnocchi swimming in sage butter is one of many pasta dishes on the menu at the Cheesecake No. 122, a restaurant in Kaiserslautern, Germany. (Jennifer H. Svan/Stars and Stripes)

Buy Photo
Gnocchi swimming in sage butter is one of many pasta dishes on the menu at the Cheesecake No. 122, a restaurant in Kaiserslautern, Germany. (Jennifer H. Svan/Stars and Stripes) 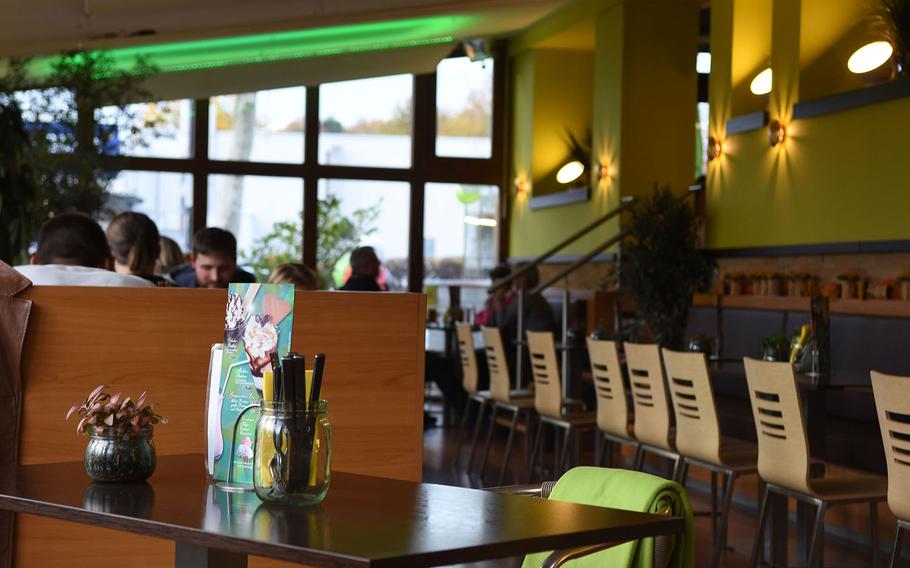 Buy Photo
The Cheesecake No. 122 in Kaiserslautern, Germany, has a pleasant, cheerful ambience, with bright colors inside the restaurant and plenty of natural lighting. (Jennifer H. Svan/Stars and Stripes) 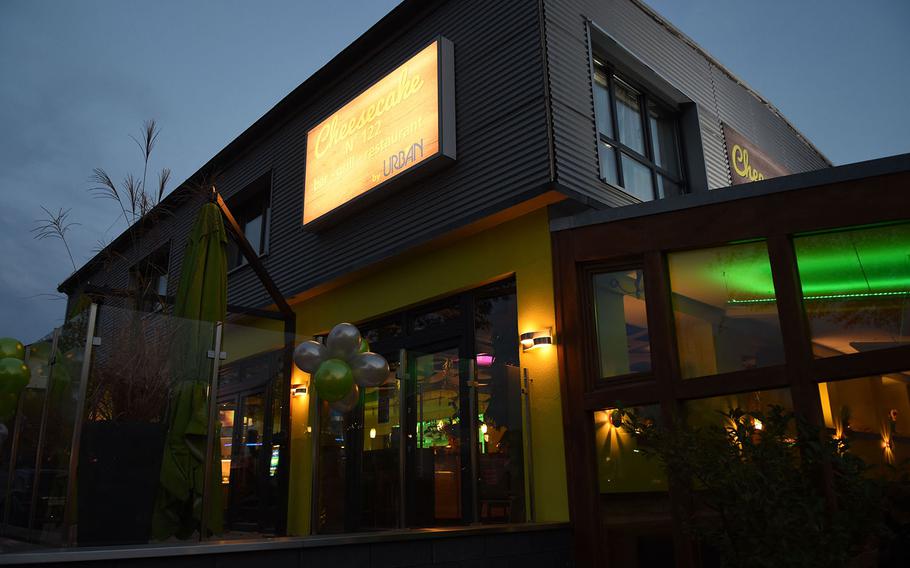 Buy Photo
Cheesecake No. 122 is a restaurant in Kaiserslautern, Germany. Like its name suggests, it serves a variety of flavors of cheesecake but also offers many non-dessert choices from pizza and pasta to steak and salads. (Jennifer H. Svan/Stars and Stripes) 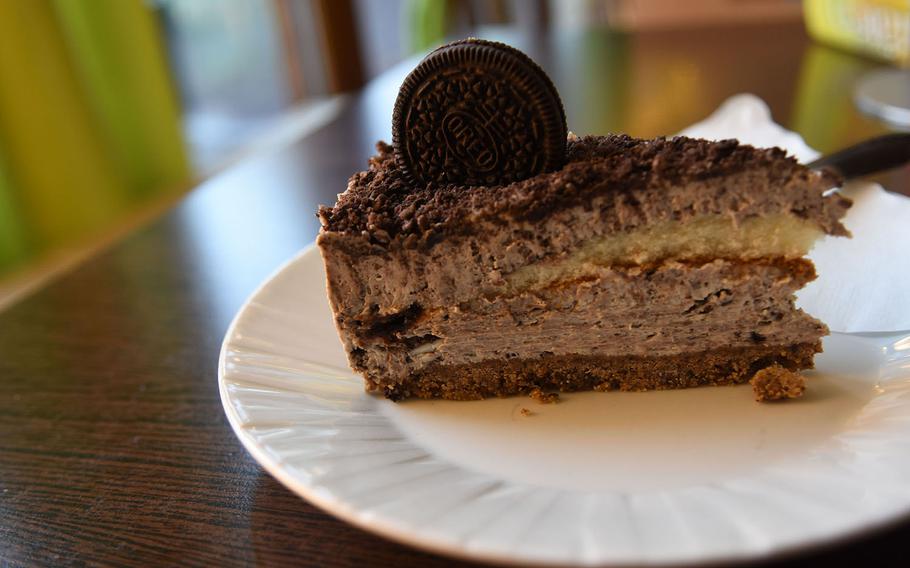 Buy Photo
The Oreo cheesecake at the Cheesecake No. 122 is just one of many dessert selections at the Kaiserslautern, Germany, restaurant. (Jennifer H. Svan/Stars and Stripes)

Five minutes after ordering, the plate of steaming-hot gnocchi was on the table.

That was fast. Was it a microwave job?

Considering that the menu at Cheesecake No. 122 is 13 pages long, it would seem impossible that apron-wearing chefs were in the restaurant’s kitchen, whipping up fresh potato dough. It could be homemade, as the menu states, but I suspect the dough spent some time in the freezer.

The saying, “jack of all trades, master of none,” might apply to this Cheesecake restaurant, which, by the way, is not connected to the U.S.-chain Cheesecake Factory.

The menu at this Cheesecake was all over the food map, veering from burgers to pizza to steak to crepes. There were vegetarian and vegan selections and a list of daily specials. Each category was deeper than a Chicago-style pizza.

Even if you could quickly zero in on a theme because you were craving a burger, for instance, you’d still have to decide between nine varieties. Should you get a cheeseburger or a triple cheeseburger? A burger with bacon and barbecue sauce or one with salsa, corn and jalapenos? You could also go “Bollywood” and get the grilled chicken breast with cream cheese or skip the meat altogether and opt for a veggie patty made with quinoa.

You could spend 15 minutes reading up on the pizza varieties, spilling over to a second page on the menu. There were the usual suspects, such as margherita and Hawaii, but also some stomach-churners with toppings that should probably not ever be on pizza. Case in point: “Pizza Mexico,” with tomato, cheese, spicy ground meat, jalapenos, bell pepper cubes, corn and nachos. No thanks.

Even the gnocchi required some decision-making: Gnocchi with gorgonzola, tomato cream or Bolognese sauce; or, what I went with, a sage butter cream sauce.

Turns out, sauce is a big part of the gnocchi. Mine was swimming in it.

I’m generally not a fan of too much sauce, but in this case, the combination of dry dough balls in a buttery sauce was quite good. Not the best gnocchi I’ve had in Kaiserslautern, but quite satisfactory.

Let’s be honest, though. If you have a sweet tooth like me, you go to a restaurant with Cheesecake in its name for one thing — the cheesecake.

On the day I visited, the cheesecake options were white berry, banana chocolate, Oreo, Kinder or Bounty bar, or traditional German cheesecake.

I ordered the Oreo. In presentation, it looked perfect, a single Oreo placed vertically on top of a field of Oreo crumbs. Unfortunately, my high expectations crumbled at first bite. Instead of the dense American-style cheesecake, it was a whipped-cheese version, less rich than its American counterpart. The strongest Oreo flavor came from the cookie itself and not the cake.

Despite the anticlimactic dessert experience, Cheesecake No. 122 has a lot going for it. The restaurant’s walls are painted avocado green, and a combination of ample natural light and soft indoor lighting set a cheerful, relaxing ambiance.

My server was friendly, taking the time to translate each of the day’s specials from German to English without me asking. The rest of the menu tome was in German and English, thankfully.

Though the Oreo cheesecake didn’t knock my socks off, I’m intrigued by a cheesecake topped with mini Bounty bars. I’ll probably go back.