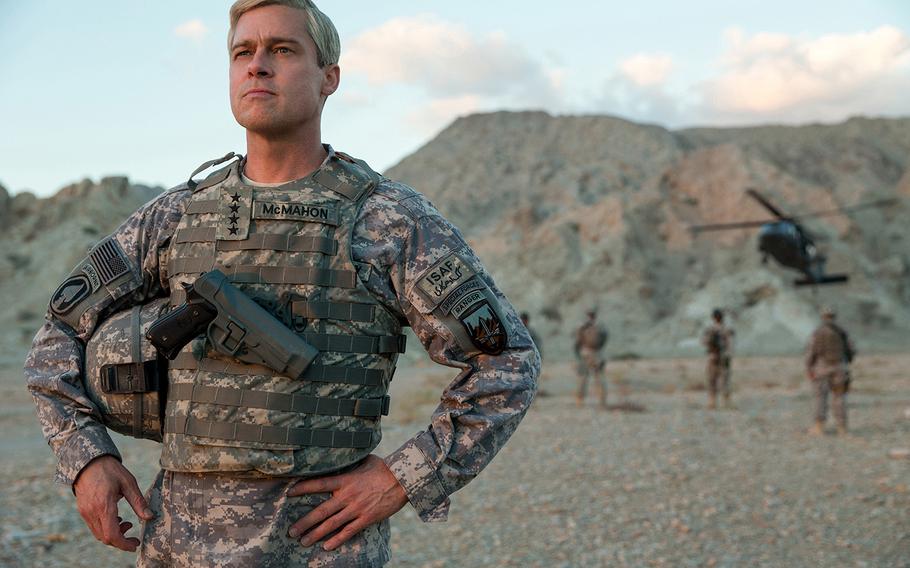 WASHINGTON — In hosting a Capitol Hill viewing of the fictional Netflix film “War Machine,” a bipartisan group of lawmakers Tuesday evening said the satire is a striking reminder of the need for urgent legislation to address and potentially end America’s longest war.

Reps. Walter Jones, R-N.C., Barbara Lee, D-Calif., Thomas Massie, R-Ky., and Rick Nolan, D-Minn., made an impassioned plea for a new war authorization in Afghanistan as they introduced the summer film with the project’s director and other guests, including two former presidential candidates.

For more than 16 years, the war has dragged on – claiming the lives of more than 2,000 Americans and leaving more than 20,000 seriously injured – with insufficient involvement or oversight from Congress, the lawmakers argued.

“It goes on and on and on,” Jones told guests gathered at the Capitol Visitor’s Center on Tuesday night. “The American people deserve that their Congress – who support the Constitution when we take our oath – should be responsible for continuing to have a debate for sending our young men and women to die in war.”

The film, which stars Brad Pitt and opened in May, is tied to a Rolling Stone magazine profile of Gen. Stanley A. McChrystal as he took over the war in Afghanistan in 2009. The satire was inspired by the Michael Hastings’ 2012 book “The Operators,” which documented a wild, unfiltered night with McChrystal and his crew directed to reverse the course of failure in Afghanistan.

McChrystal was dismissed in light of the story, which quoted criticism against Vice President Joe Biden and others.

“The movie is kind of a bit ridiculous,” said director David Michôd, who is from Australia. “It’s a war satire when we don’t make them anymore. It’s incredibly gratifying for me that even though we released this in May, its tail is still wagging in places like this, the places that actually count.”

The lawmakers said Tuesday the film highlights the concerns fueling long-running opposition to the 2001 and 2002 war authorizations that triggered the U.S. conflicts in Iraq, Afghanistan and elsewhere. In the last two months, the war powers have been debated for hours on the Senate floor, been the subject of several congressional hearings and won growing support for revision or repeal among members of both houses.

Earlier this year, Lee, who opposed the 2001 authorization and has pushed to repeal it in the 16 years since, won support from a House Appropriations committee for her legislation to debate the current war powers in the lower chamber. But the effort was stripped in a later version of the defense bill carrying her amendment.

The authorizations have been used by presidents George W. Bush, Barack Obama and Donald Trump for 37 engagements in at least 19 countries, said Lee, who describes herself as an “Army brat” as the daughter of a veteran soldier.

“We remain locked in a war without end,” Lee told guests Tuesday. The 2001 war authorization “set the stage for perpetual war. That blank check has been used everywhere in the world.”

Massie, who joked he’s “transpartisan” these days, said he continues to argue against the U.S. presence in Afghanistan because it’s clear that the U.S. is no longer fighting to win and the Taliban will remain after the Americans leave.

A hard pill to swallow, he said: Servicemembers will soon join the war who were born after it started. His son, who is in high school, might be among them, since he is hoping to join the military.

“Year after next, we will have soldiers deployed to this war who were born during the war,” he said. “If that doesn’t send chills up your spine, I don’t know what will.”

Massie said he’s argued the concern with his conservative colleagues on a budgetary basis as well as from a historical perspective.

For example, the proposed defense bill’s war account is at more than $40 billion, which is equivalent to five Nimitz-class aircraft carriers, he said.

“Why are you sinking five aircraft carriers in the mountains of Afghanistan?” he told the “War Machine” audience. “Not to say anything about the human life that will be lost.”

Massie also highlighted the ruin of empires lost in Afghanistan.

“Afghanistan is called the graveyard of empires for a reason,” he said. “Alexander the Great learned that the hard way. The Soviet Union. The British Empire. Why do we have to learn that the hard way? It’s time to get out of Afghanistan.”

Former presidential candidates Dennis Kucinich and Ralph Nader were also in attendance Tuesday to show support for the lawmakers and the film.

“Congress has to begin obeying the Constitution and the international treaties that we helped write and support,” Nader said. “These are criminal wars of aggression. They sent soldiers to kill and die in those countries like Afghanistan and they flatter them, and when they come home, they abandon them.”