Lawmakers to take on veterans issues after weeklong recess 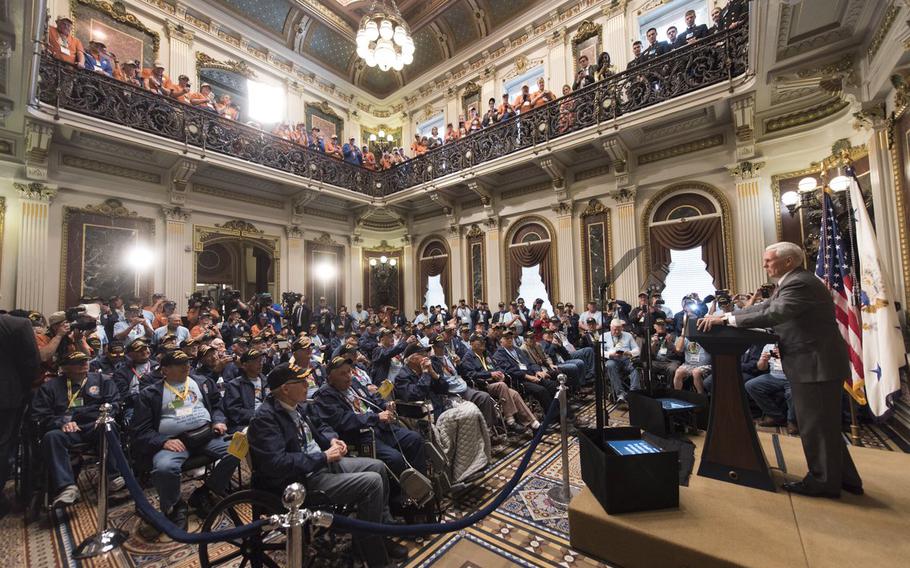 Vice President Mike Pence speaks at the White House Eisenhower Executive Office Building in Washington on May 8, 2017, as veterans from Colorado were in town participating in an Honor Flight event. A host of veterans issues are slated to be addressed as lawmakers return to Washington following the July 4th holiday break. (White House photo)

WASHINGTON — As they return this week from a July Fourth break, lawmakers are set to discuss Department of Veterans Affairs health care, its 2018 budget, how veterans are affected by the opioid crisis and how the VA handles claims for Gulf War Illness – all while facing a short timeframe to do something about quickly diminishing funds in the VA Choice program.

Choice funding VA Secretary David Shulkin warned lawmakers June 16 that money was unexpectedly running out for the Choice program, which allows veterans to seek health care outside the VA. Despite projecting the VA would roll over $626 million for Choice funding into the next fiscal year, Shulkin said the fund would be depleted by Aug. 7.

He attributed the faster spending to the increased popularity of the program among veterans this year.

Now, there’s concern that without action from Congress, more veterans will have to receive care within the VA, creating longer wait times and adding stress to the system that the Choice program was meant to alleviate.

Shulkin is seeking emergency funding or authority from Congress to transfer money from a community care account that holds about $2 billion. Currently, he does not have the power to move money between the accounts.

In the meantime, the VA has taken $104 million from the national reserves. VA Chief Financial Officer Mark Yow told a Senate Appropriations subcommittee on June 21 that VA regional directors offered up an additional $220 million.

“It’s more important than what they had it set aside for,” Yow said

Congress has three weeks to respond to the funding crisis before they leave again for a monthlong August recess.

New Choice program Plans to reform the Choice program are expected to be unveiled Tuesday, following months of Shulkin promising he’d change rules that restrict which veterans can receive outside health care.

During his first public address as VA secretary, Shulkin said would end a controversial policy that allows veterans to seek care outside the VA only if they can’t receive an appointment within 30 days or they live more than 40 miles from a VA facility. But, he said, the new program would stop short of unfettered choice.

Though legislation has yet to be introduced, Shulkin said he hopes to push the new program through Congress by Sept. 30, the end of the fiscal year. President Donald Trump’s 2018 budget proposal calls for $2.9 billion in new funding for the program next year and $3.5 billion in 2019.

A discussion draft for the new plan, obtained by Stars and Stripes, describes a performance-based system in which veterans would be allowed to seek private-sector health care if the quality of VA care in a certain area isn’t up to par with other health care providers in that community. The VA would periodically determine which VA hospitals and clinics aren’t meeting standards, based on wait-time data and patient satisfaction information.

The discussion is anticipated to take place during a meeting of the Senate Veterans’ Affairs Committee.

Also at the hearing, committee members are scheduled to discuss 10 bills, including one to streamline hiring at the VA, especially in rural areas. According to the latest VA data, there were 49,386 vacancies throughout the VA as of April. Of those vacancies, 45,360 are in the health care side of the department.

The “Better Workforce for Veterans Act” aims to establish recruiting programs for recent graduates and private-sector employees, and create a database to advertise open positions, among other things.

VA budget A Senate Appropriations subcommittee will propose a fiscal 2018 VA budget at a Wednesday meeting, which will be followed by a full committee markup of the proposal Thursday morning.

Last month, House appropriators proposed a $182 billion budget for the VA, an increase from 2017 levels but still short of the $186.5 billion Trump is calling for.

Claims for Gulf War Illness A subcommittee of the House Committee on Veterans’ Affairs will discuss Thursday how the VA handles disability claims from veterans suffering from Gulf War Illness.

The hearing will follow the expected release this week of report from the Government Accountability Office, which examined how the VA made decisions on claims of Gulf War Illness over the past few years.

Gulf War Illness is an umbrella term for several chronic medical conditions among veterans who served in Southwest Asia since 1990, including gastrointestinal and neurological problems and fatigue. It’s a presumptive condition, meaning the VA requires less evidence from veterans who submit claims for it.

Other subcommittees of the House Committee on Veterans’ Affairs will hold hearings this week: one on Wednesday examining the VA’s capital assets, and another Thursday looking into VA productivity and efficiency.

Opioid crisis Lawmakers and VA officials will be part of a discussion Thursday at the Newseum about new research into the U.S. opioid epidemic and how the government should fight it.

Talks about the effects of opioids on the veterans community will be included in the half-day event. According to information from the VA in 2014, veterans are twice as likely to die from an accidental overdose than non-veterans.