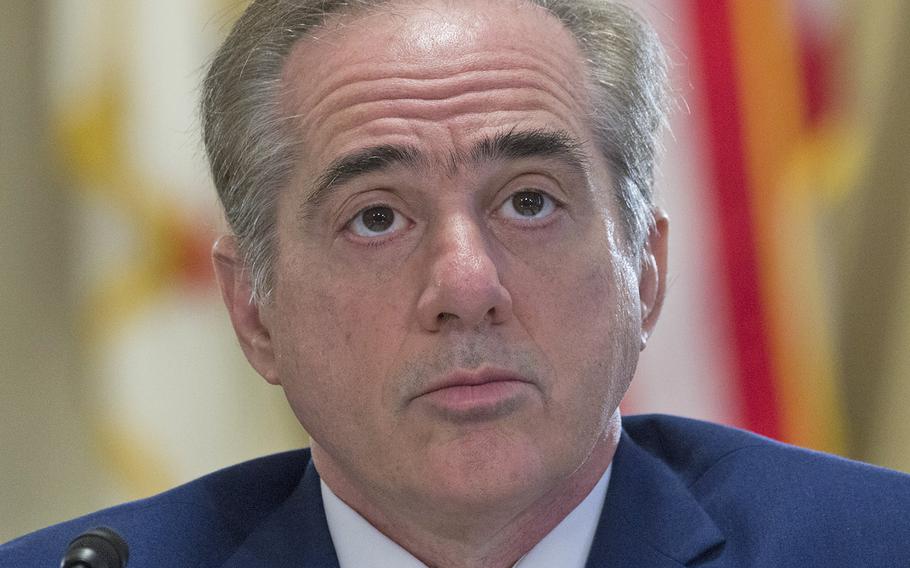 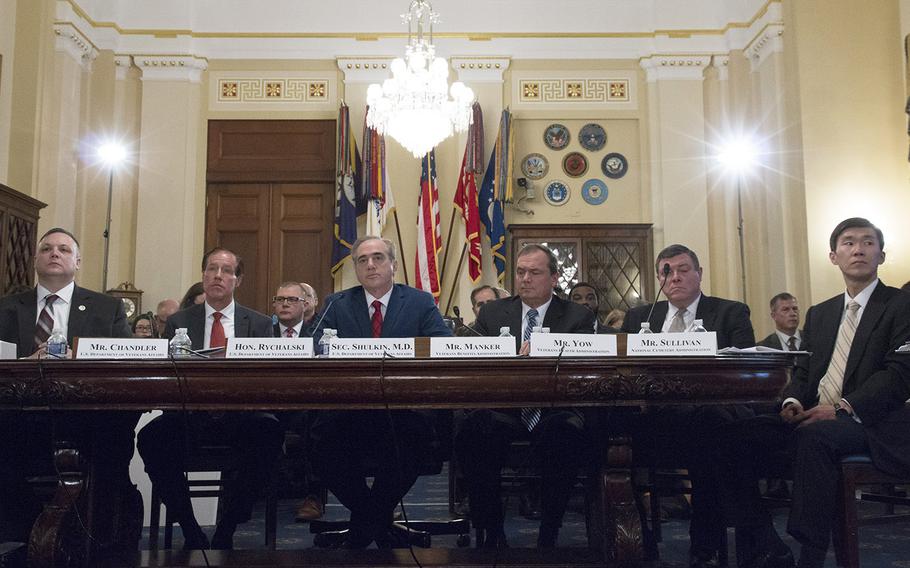 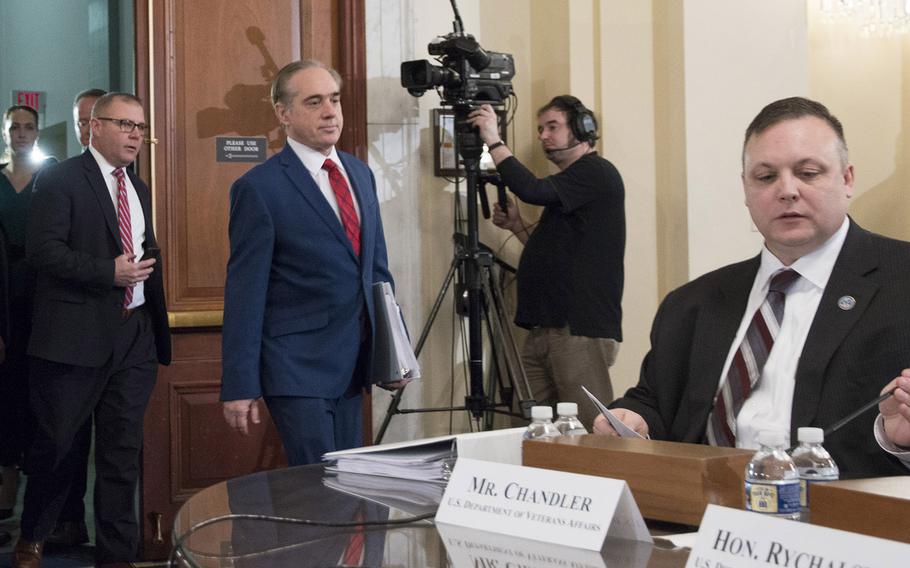 WASHINGTON — When put in a position Thursday to question Department of Veterans Affairs Secretary David Shulkin — who’s facing allegations of poor judgement and misconduct regarding an official trip to Europe last summer — lawmakers were mostly restrained.

Shulkin faced the 24-member House Committee on Veterans’ Affairs on Thursday morning, the day after the release of a scathing VA inspector general report that found a misuse of taxpayer dollars during his trip with his wife and VA staff to Copenhagen and London in July.

At the request of committee chairman Rep. Phil Roe, R-Tenn., questions Thursday were focused mostly on the budget and other issues at the agency, and the travel controversy didn’t bleed much into the previously scheduled hearing.

Rep. Tim Walz, D-Minn., the ranking Democrat on the committee, said that together, the committee chose “not to allow partisan grilling to go on.”

In an opening statement, Shulkin told the legislators he had already written a check to the U.S. Treasury for travel expenses that a VA watchdog found were improperly covered by taxpayer dollars.

“I’m grateful for the decision to reimburse the federal government and move on,” Walz said.

Some on the panel took the opportunity to publicly express their disappointment about the report’s findings before moving on to other issues.

“I do think it’s important to restore confidence in our executive officials,” said Rep. Ann McLane Kuster, D-N.H. “So I hope in the coming days, you’ll be forthcoming with the American people.”

Rep. Jim Banks, R-Ind., said he appreciated the seriousness of how Shulkin was addressing the allegations. Rep. Elizabeth Esty, D-Conn., echoed that, stating, “I appreciate your willingness to speak with us on the IG’s report, and we’ll speak about that at another time.”

Rep. Clay Higgins, R-La., prefaced his questions by defending Shulkin. In comments directed toward the media, he said: “This is a nation where men are innocent until proven guilty. I hope it’s not sliding to be a nation of allegations and accusations.”

VA Inspector General Michael Missal released the report Wednesday that outlines “serious derelictions” by VA personnel regarding the 10-day trip, which included full days of leisure activities and cost taxpayers at least $122,000. Investigators found Shulkin improperly accepted Wimbledon tickets, and they alleged the VA chief of staff doctored an email to an ethics official to provide reason for taxpayer dollars to be spent on travel expenses for Shulkin’s wife, Dr. Merle Bari.

Three lawyers representing Shulkin wrote a 16-page rebuttal that was attached to the inspector general’s report. They wrote about “grave concerns” about the report, which they argued ignored critical facts, presented a one-sided version of events and was factually and logically flawed.

Less than two weeks before the trip in July, Shulkin issued a memorandum to top VA staff with the intent to limit travel expenses. He insisted Thursday his Europe travel was essential.

“We’ve had this conference for 43 straight years, and it has been attended by every VA secretary,” Shulkin said. “I do recognize the optics of this are not good. I accept responsibility for that.”

Following the hearing, Coffman told reporters that Shulkin did not “own up to” the report’s findings. Further, he asserted that Trump chose Shulkin as VA secretary only because his first three choices declined the job. Coffman also said Shulkin couldn’t clean up the VA because he was a holdover from former President Barack Obama’s administration and was part of the group that muddied it.

“I just don’t see how this particular holdover as a secretary can change the culture of the VA, when he’s really such a part of it,” Coffman said. “The situation in the IG report just demonstrates that.”

Shulkin told reporters he had no plans to resign.

“I’m not going to be distracted by issues like that,” he said.

Altered email, false statements VA ethics officials initially declined to have the agency pay for Bari’s travel expenses. VA Chief of Staff Vivieca Wright Simpson got involved and doctored an email to an ethics official that made it appear Shulkin would receive an award in Denmark, when in fact he did not, the report states. Under ethical rules, the government can pay for a federal employee’s spouse to travel for an awards ceremony.

The email Wright Simpson changed was from another VA employee. It stated, “We’re working on having a dinner at the US Ambassador’s Residence in honor of SECVA, but that has not been confirmed by US Embassy Copenhagen yet.”

Wright altered the employee’s words to, “We’re having a special recognition dinner at the US Ambassador’s Residence in the honor of SECVA.” She sent the letter to an ethics official, who approved Bari’s travel expense of $4,312.

In her first interview with investigators, Wright Simpson said she didn’t recall whether she had changed the email, the report states. In the second, she gave evasive and nonresponsive answers.

Investigators found no evidence Shulkin was aware of the falsification. His lawyers wrote that he had nothing to do with the process and was prepared to pay for Bari’s travel when he was told by his staff that the expenses could be reimbursed.

Investigators referred their findings about Wright Simpson to the Department of Justice, which declined prosecute, though the actions might have violated criminal statutes, the report states.

Following Thursday’s hearing, Shulkin blamed a hacker for altering the email from Wright Simpson. He alleged a hacker was still sending emails from her account and the VA was looking into it.

“We have found somebody has taken over the chief of staff’s emails and is sending emails like it’s her,” he said. “So we need to understand that. I’m not a forensic expert, but we have found there are people sending emails from her account that’s not her. That is concerning to us.”

Walz said Thursday that hacking VA information systems was a “serious matter,” and that he’d ask the Justice Department to look into it, if Shulkin thought it necessary.

Improperly accepted tickets? Shulkin and Bari were given tickets to the July 15 women’s final tennis match at Wimbledon by Victoria Gosling, who served as CEO of the 2016 Invictus Games in Orlando, Florida, the report states.

Investigators determined that accepting the tickets was an ethical violation. Some of their investigation focused on whether Gosling and Bari were friends. In response to a question from the designated VA ethics official, Shulkin said the two had a social friendship. Federal ethics standards allow for gifts between personal friends.

But during an interview with investigators on Feb. 6, Gosling couldn’t remember Bari’s first name.

“Toward the end of the interview, investigators asked whether Ms. Gosling could recall the first name of Secretary Shulkin’s wife,” the report reads. “After a long pause, Ms. Gosling was unable to recall Dr. Bari’s name, stating, ‘You actually — I think that kept throwing me. I’m actually having a genuine blank here.’”

The 10-day trip included 31/2 days of meetings with officials from the United Kingdom, Canada, Australia and New Zealand to discuss veterans’ issues. The rest of the time was spent on leisure activities, including visiting castles and palaces in London and Copenhagen; taking a boat tour and a river cruise; shopping; and making a side trip to Malmo, Sweden.

Shulkin assigned a VA employee to spend official time planning those activities. Investigators wrote it was clear the employee spent many hours on the itinerary and “effectively acted as a personal travel concierge” to Shulkin and Bari. It was a misuse of VA resources, Missal wrote.

Shulkin’s lawyers argued the trip was valuable because he participated in “hours of substantive meetings.”

“Secretary Shulkin did nothing wrong in traveling to Europe to meet with and learn from America’s allies,” they wrote. They described it as a “valuable opportunity to strengthen the bond among allied countries whose retired soldiers are facing the same struggles as American veterans.”

While the trip cost at least $122,334, investigators noted they were unable to determine the true cost because the VA lacked certain travel documentation. That amount includes $42,230 for travel for Shulkin, his wife, staff and security.

Shulkin made false statements to the Washington Post about the trip, the report states, claiming he bought the Wimbledon tickets and they were not a gift from anyone connected to the Invictus Games.

Shulkin will comply In a statement posted to the VA website Wednesday but quickly taken down, Shulkin said he would comply with the inspector general’s recommendations. The first was to pay back the U.S. Treasury for $4,312 – the amount the VA paid for Bari’s travel expenses.

The inspector general’s office also recommended Shulkin consult with the VA Office of General Counsel to determine the value of the Wimbledon tickets and any food, parking and passes he and Bari may have received. That amount should be paid back to Gosling, or to the Treasury if she won’t accept it.

Shulkin should also decide whether the VA should take action against Wright Simpson, the report states. And he should organize an audit of travel expenses for the European trip to determine whether there were any overpayments that should be paid back.

Lastly, the inspector general’s office recommended the VA train its employees on travel planning and the ethical boundaries of accepting gifts.

Leaders of the House Committee on Veterans’ Affairs said Thursday they were looking forward to hearing Shulkin address everything in the report but seemed willing to give him more time.

“Your intentions to help veterans is clear, and the trust you have on this committee is strong,” Walz said. “But we do need to address these allegations.”

Shulkin told reporters Thursday he had spoken to Trump about the report.

“I’m going to be going over and having further discussions with him,” Shulkin said. “Everybody is concerned. Everybody knows how much work we have to do at the VA. We have to continue the progress. We can’t let this take us off track.”