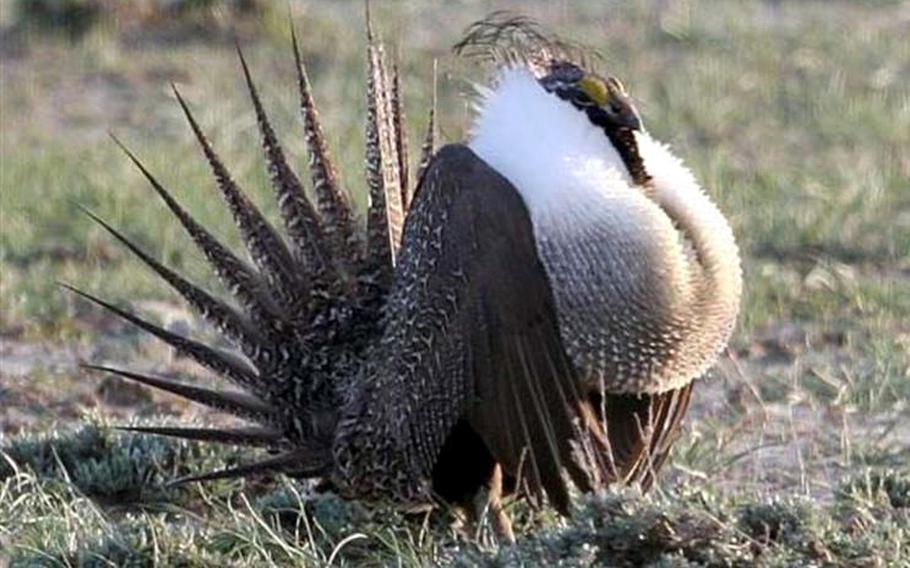 A sage-grouse. (Bureau of Land Management)

WASHINGTON — The continent’s largest grouse species is causing a headache for the world’s mightiest military.

The services have warned that training and operations at some western U.S. bases might be hamstrung if the greater sage-grouse, known for its distinctive strut, officially becomes an endangered species this fall. On Tuesday, Republican lawmakers in the House said listing the bird could hurt military readiness.

The U.S. Fish and Wildlife Service had for years put off a decision about boosting federal wildlife protections for the sage-grouse, which is dwindling along with its lowland sagebrush habitat. But the agency is now set to make a determination in September, raising concerns at Army and Air Force facilities in Utah, Wyoming and Washington.

“Listing the sage-grouse could have serious repercussions for many critical DOD training facilities in the western United States. We should not further threaten our military’s readiness when it is already in such a precarious state,” Rep. Rob Wittman, R-Va., chairman of the Armed Services subcommittee on military readiness, wrote in a statement to Stars and Stripes.

Wittman called for a responsible balance between conservation and national security.

If the Obama administration lists the bird under the Endangered Species Act, “the needs of our military will be subordinate to an extreme environmental agenda. Our military personnel, who we ask so much of, deserve better,” Bishop said in a written statement.

The black and brown grouse, which grows up to 5 pounds, is under increasing pressure as fires, development and energy extraction reduce the sagebrush that grows on its 11-state range in the northwestern United States.

The FWS is scheduled to finish up its review of the bird and make a final decision Sept. 30. An agency listing under the Endangered Species Act would bring the highest levels of federal protection and mean tight restrictions on Defense Department activities in those lowlands.

It would likely lead to restricted military access to training grounds and firing ranges, decreases in the number of exercises and limits on overflights and ground movements, the Army and Air Force reported in separate presentations over the past month. The materials were provided to Stars and Stripes on Tuesday by the House Committee on Natural Resources.

Grouse inhabit the 327,000-acre Yakima Training Center in Washington state, which the Army calls its premier training destination in the Pacific Northwest; and the Dugway Proving Ground in Utah, according to the service.

The Air Force said its 100,000-acre Saylor Creek bombing and training range and its sprawling Utah Test and Training Range west of Salt Lake City are within the bird’s territory and would likely see curtailed activity. The Utah range comprises the largest overland footprint for aircrew training and weapons testing, as well as the only place for testing cruise missiles over land, according to nearby Hill Air Force Base.

The services already work to protect the sage-grouse.

The Air Force said it spends $200,000 annually on protection measures, including suppression of wildfires and controlling invasive species, and new development restrictions could cost an additional $500,000.

But relief from a federal listing could still be in the cards for the military. Earlier this month, the FWS said it will not seek to have the grouse declared endangered in California and Nevada, where new local conservation efforts will make it unnecessary. The deal was brokered by the Interior Department.

Jessica Kershaw, an Interior Department spokeswoman, said her agency is working with the DOD on its grouse preservation efforts.

“The Endangered Species Act allows the secretary of defense to obtain an exemption from the act’s requirements if necessary for national security,” Kershaw wrote in an email.