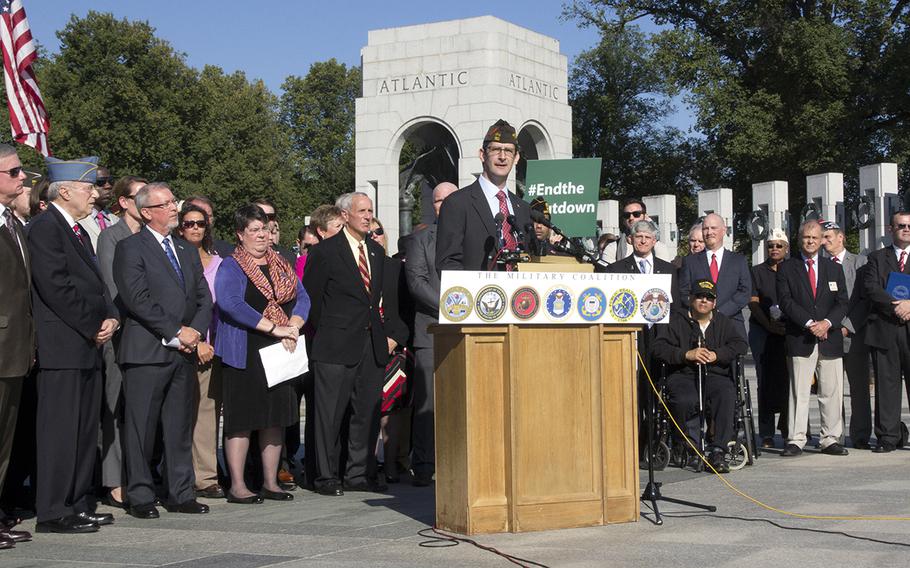 Buy Photo
Ray Kelley, VFW's national legislative director, is joined by representatives of several veterans groups as he speaks at a press conference at the National World War II Memorial in Washington on Oct. 15, 2013. (Joe Gromelski/Stars and Stripes) Buy Photo
Paul Rieckhoff, founder and CEO of Iraq and Afghanistan Veterans of America, speaks at a press conference at the National World War II Memorial on Oct. 15, 2013. (Joe Gromelski/Stars and Stripes) 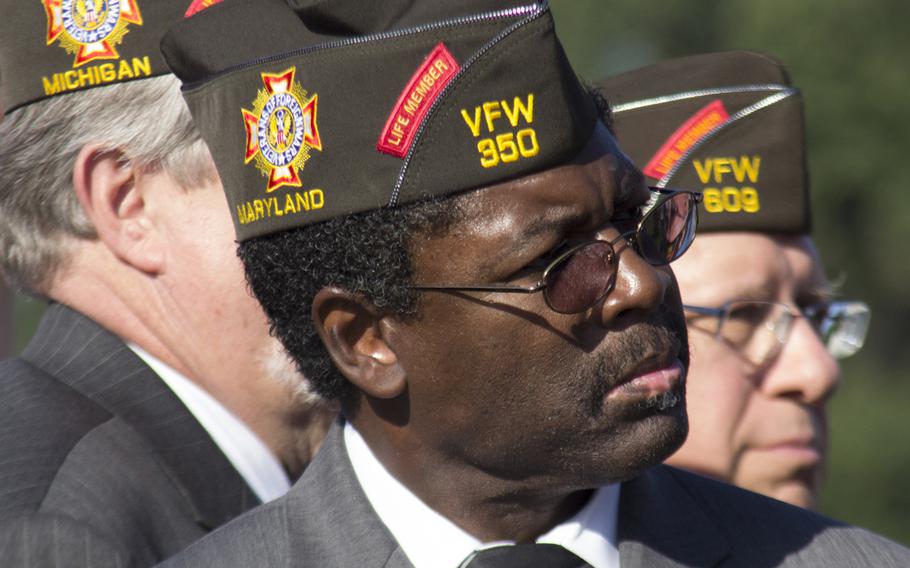 Buy Photo
Veterans listen to a speaker during a press conference at the National World War II Memorial on Oct. 15, 2013. (Joe Gromelski/Stars and Stripes) 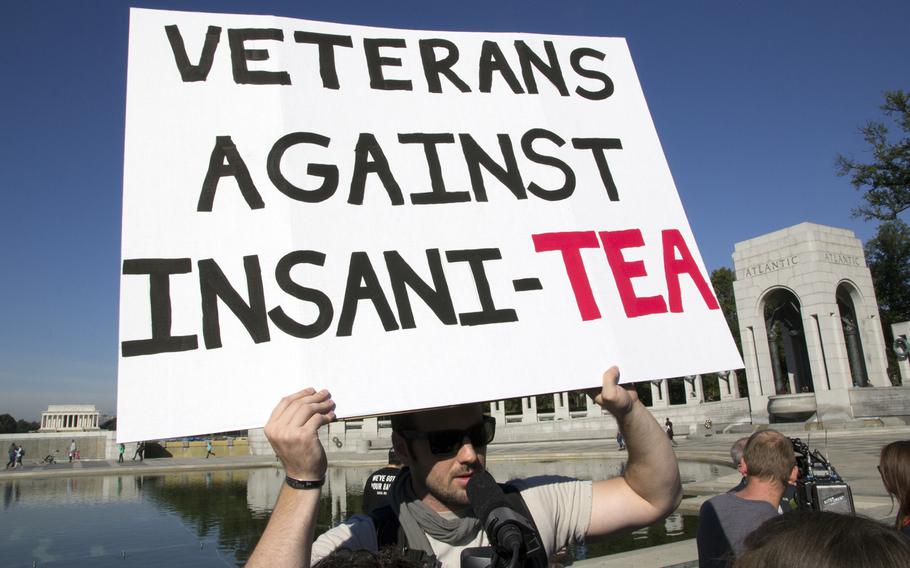 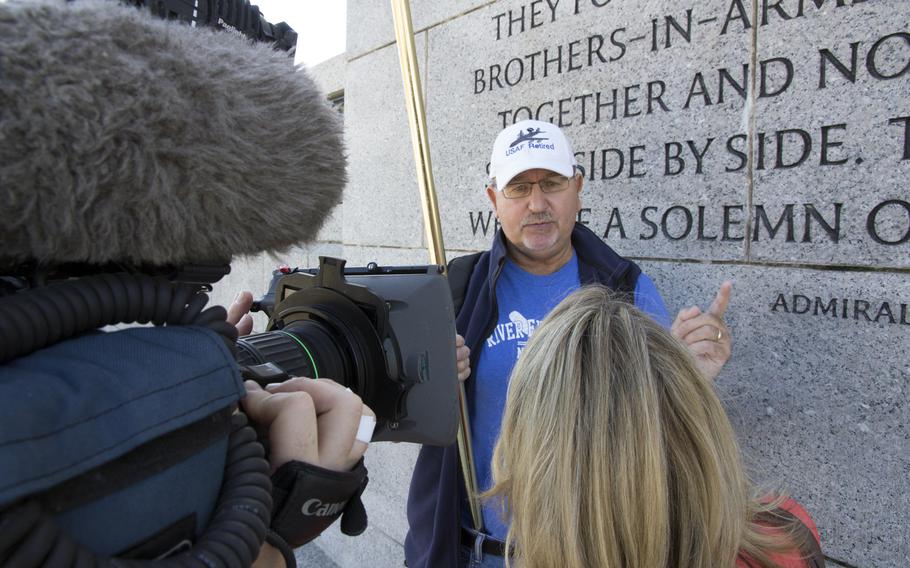 Buy Photo
A veteran tells a television crew that the blame for the government shutdown should be placed at the White House. (Joe Gromelski/Stars and Stripes) 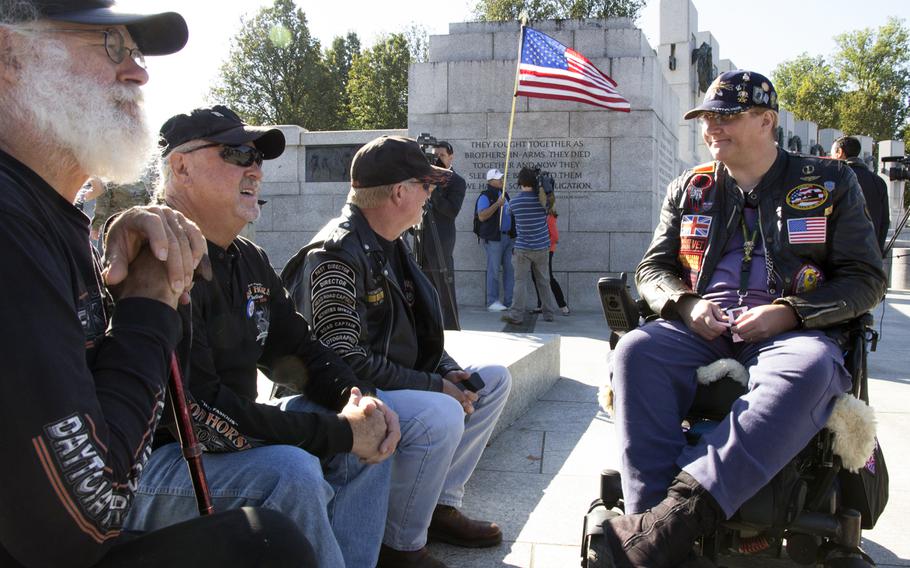 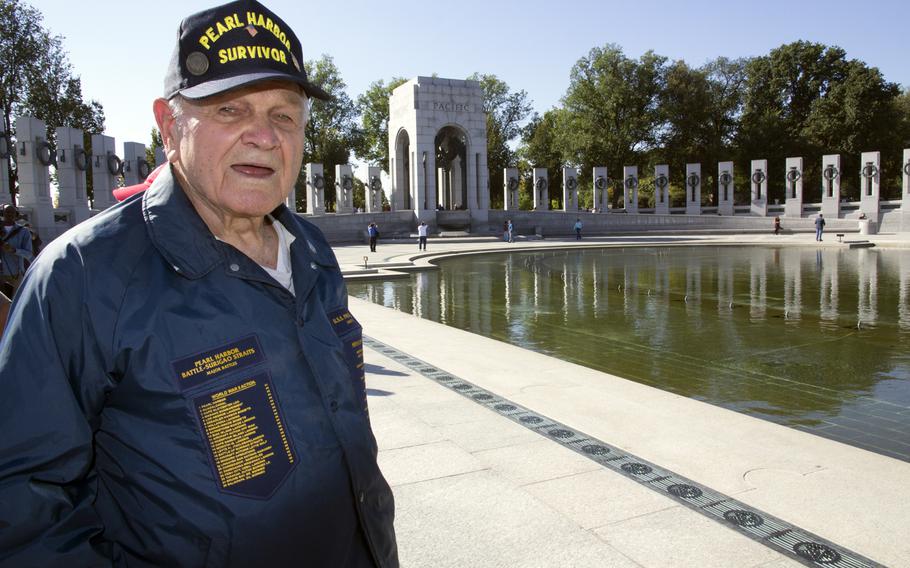 WASHINGTON — Military advocates massed at the World War II Memorial again on Tuesday to plead for an end to the government shutdown, saying it’s hurting veterans and endangering national security.

The message was unchanged, but the crowd was distinctly different from those at recent rallies at the site.

In the last two weeks, the monument has become a rallying spot for visiting veterans, posturing politicians and -- on Sunday -- a few thousand angry conservatives who relocated park service barricades from there to the White House a few blocks away.

Tuesday’s rally, organized by the Military Coalition, was billed as a no-politicians-allowed event. The group of 33 influential organizations for veterans and active-duty troops said its goal was to highlight the pain the shutdown has caused and the need to find a compromise solution.

“I don’t think we’ve ever seen Congress fail us this badly before,” said Paul Rieckhoff, executive director of Iraq and Afghanistan Veterans of America.

Veterans Affairs officials have warned that benefits payouts and a host of support programs could stop if the shutdown lasts into late October. The Defense Department has halted some base services and family support programs and furloughed thousands of civilian workers.

Steve Gonzalez, assistant director of the American Legion’s economic division, said efforts to help homeless and unemployed veterans have been stalled by the shutdown. Last week, officials from the Fisher House Foundation began paying death gratuities to the families of fallen troops, because Pentagon officials said they no longer had the legal authority to do so.

“Our servicemembers and veterans are being forced to depend on charity for their very existence,” Gonzalez said.

Speakers at the rally, attended by about 200 people, did not offer a solution to the shutdown, other than to “end it.” Lawmakers have been deadlocked for two weeks over how to continue funding federal operations and raise the national debt ceiling.

House Republicans have passed a measure that would reinstate full funding for VA programs while the shutdown occurs, but the idea has gained little support among Democrats in the Senate.

Leaders from the Veterans of Foreign Wars said they oppose piecemeal solutions, noting that many military and veteran support programs rely on agencies like the Department of Labor, Housing and Urban Development and the Department of Education.

“Fixing it little by little is not going to solve this problem for veterans,” said Ray Kelley, VFW’s national legislative director.

The Military Coalition has offered no preferred path for ending the political stalemate.

“That’s for the politicians to decide,” said Bob Norton, deputy director of government relations at the Military Officers Association of America. “How they do it is up to them. But it needs to be resolved.”