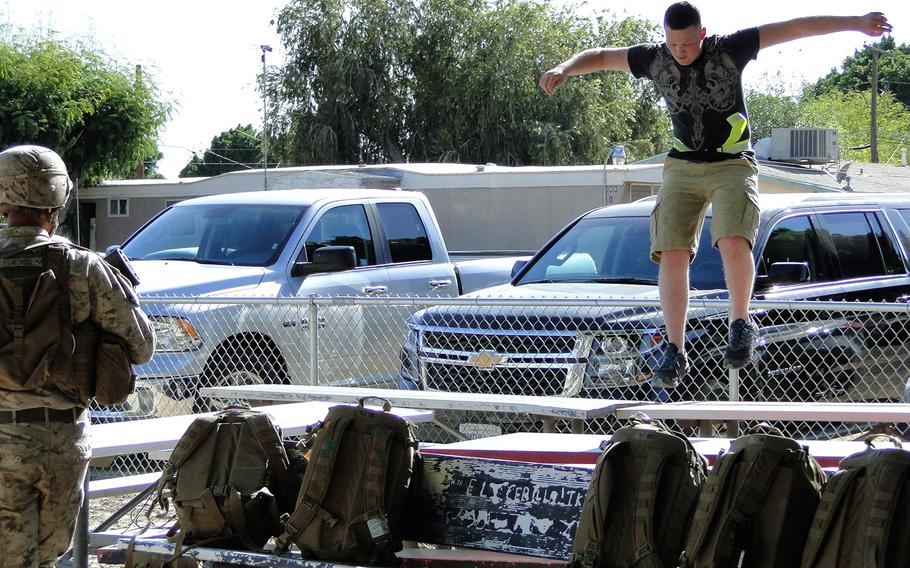 Buy Photo
A Marine playing a role as an unruly civilian jumps up at down to taunt the security detail, during a humanitarian relief training exercise Friday in Yuma, Ariz. (Jennifer Hlad/Stars and Stripes)

Buy Photo
A Marine playing a role as an unruly civilian jumps up at down to taunt the security detail, during a humanitarian relief training exercise Friday in Yuma, Ariz. (Jennifer Hlad/Stars and Stripes) 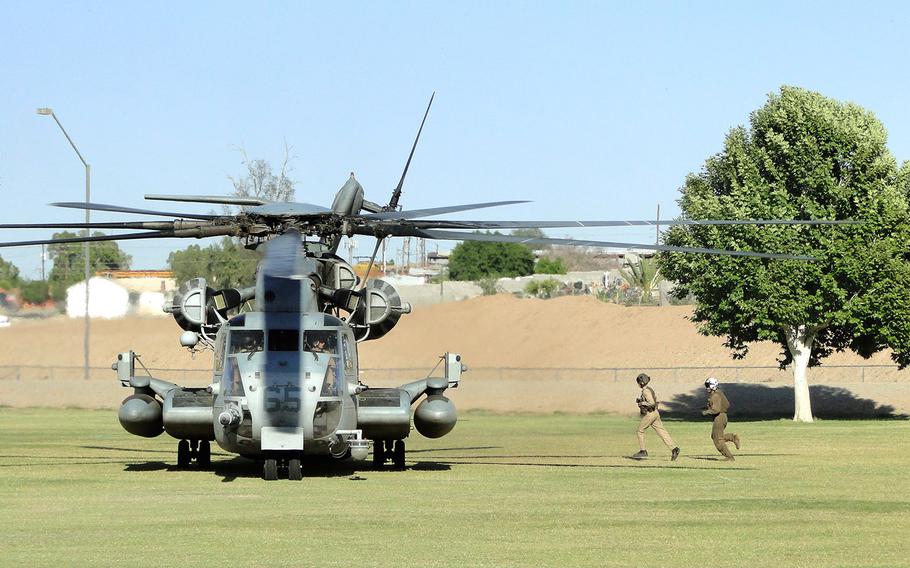 Buy Photo
Marines run to re-board a CH-53E Super Stallion after it touched down in a park in Yuma, Ariz., Friday, as part of a training exercise. The Marines are completing a seven-week training course that will allow them to train their squadrons for a variety of missions. (Jennifer Hlad/Stars and Stripes) Buy Photo
A Marine tends to role players acting as injured civilians during a simulated humanitarian aid mission Friday in Yuma, Ariz. The exercise, which also included a simulated embassy evacuation, was part of Weapons and Tactics Instructor course. (Jennifer Hlad/Stars and Stripes)

YUMA, Ariz. — A crowd of civilians gathered, snapping photos and leaning over the fence, as the CH-53E Super Stallions landed on the grass and Marines poured out, securing the landing zone and unloading aid supplies.

Lance Cpl. Eric Martin stood watch, trying to keep rowdy people from breaking through the gate, while other Marines arranged a camouflage net over a makeshift aid station.

Meanwhile, Cpl. Arturo Carrillo, Pvt. Rusty Arbuckle and Lance Cpl. Bryan Scott did everything they could to create chaos.

The humanitarian aid scenario on this hot Friday afternoon was part of a training exercise spread over in two states, designed to show students at a training school how to respond when Marines are called to evacuate an embassy and provide medical help.

It’s not a new training scenario for Marines, but here, they’re learning how to teach others while honing their own skills.

The Weapons and Tactics Instructor course is a biannual seven-week graduate-level course that prepares Marine pilots to return to their units as training instructors. It also incorporates ground and logistics Marines into the scenarios to make them as realistic as possible.

The current session of WTI is the largest since 2006, in terms of the number of students and aircraft involved, said Col. James Adams, commander of Marine Aviation Weapons and Tactics Squadron One, which sponsors the course.

That is partially due to increased demand, as the Marine Corps deploys smaller units and commanders need more WTI graduates to train fellow Marines.

“I don’t think we’ve seen the biggest class yet,” he said.

Playing the part On this Friday, infantry Marines with 1st Battalion, 5th Marine Regiment, flew MV-22 Ospreys to a park in Twentynine Palms, Calif., while others from 1/5 landed in the park in Yuma. Marine and civilian role players at those locations and at a Yuma school and hospital gave the training a dose of realism.

Carrillo, based in Beaufort, S.C., was in Yuma to support the course, playing an angry 22-year-old who hated Americans. Arbuckle played a 35-year-old with a high fever and infected cut on his leg, and Scott was an 8-year-old who was malnourished and weak – but still able to run and create distractions.

Other Marine role players taunted the security detail, with one leaping the fence to jump up and down on a table and yell, then hop back to safety before he could be tackled and handcuffed.

First Lt. Dominic Della Pelle, a student in the course, was in charge of the perimeter security team. Though much of what the public saw was how the exercise played out, a key part was the planning, he said.

The course involves all the Marine Corps’ aviation assets, including the F-35B Joint Strike Fighter. It has also begun incorporating non-traditional warfare into the training, such as electronic and cyber attacks, Adams said.

During the training, hundreds of Marines operate at combat tempo for about four straight weeks, using aircraft borrowed from the fleet.

‘Absolutely essential’ The concept of training the trainer evolved in the 1970s, with WTI setting a standard that all squadrons across the Marine Corps must meet.

“It’s not easy,” Adams said. “It’s very resource intensive. … but it’s absolutely essential to the future of our aviation capabilities.”