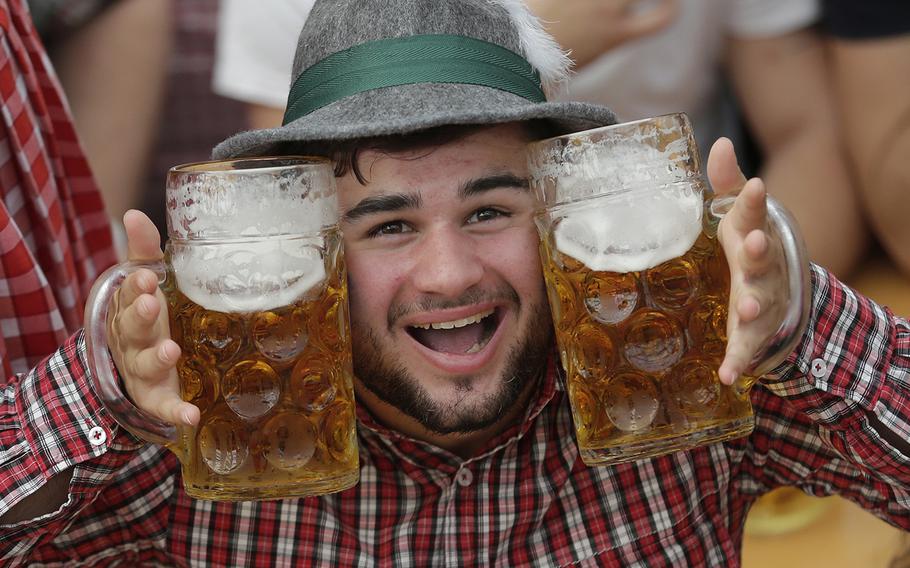 A young man poses with beer mugs at the second weekend in the 'Hofbraeuhaus beer tent' at the famous beer festival Oktoberfest in Munich, southern Germany, Sunday, Sept. 28, 2014. The world's largest beer festival will be held from Sept. 22 to Oct. 5, 2014. (AP Photo/Matthias Schrader) (AP)

It’s last call at Oktoberfest, with beer flowing and rides dipping and twirling for only one more weekend.

But there’s still time to break out the lederhosen and dirndls — low-cut Bavarian dresses that are now as likely to be hot pink satin and black lace as the old standard blue-and-white. Or just come as you are and enjoy some of the best brews Munich, Germany, has to offer.

Oktoberfest, which ends Sunday, offers something for everyone, even visitors who don’t drink alcohol. There are whirling amusement rides and games of skill and chance on the fairgrounds. There are souvenir shops selling all kinds of traditional and silly mementos, including hats with beer kegs. And don’t miss the hearty festival eats, including half-meter bratwursts, roasted chickens, schnitzel sandwiches and, for the more adventurous, pigs’ knuckles.

About 6 million liters of beer are consumed each year. But if you’re looking to drink liter-sized brews in one of the famed tents, your only chance is to arrive early — no seat, no service is the motto inside. Even spots outside fill up.

Find detailed information at the event’s official website, www.oktoberfest.de/en. And mark your calendar for the 2015 fest, set to kick off on Sept. 19.