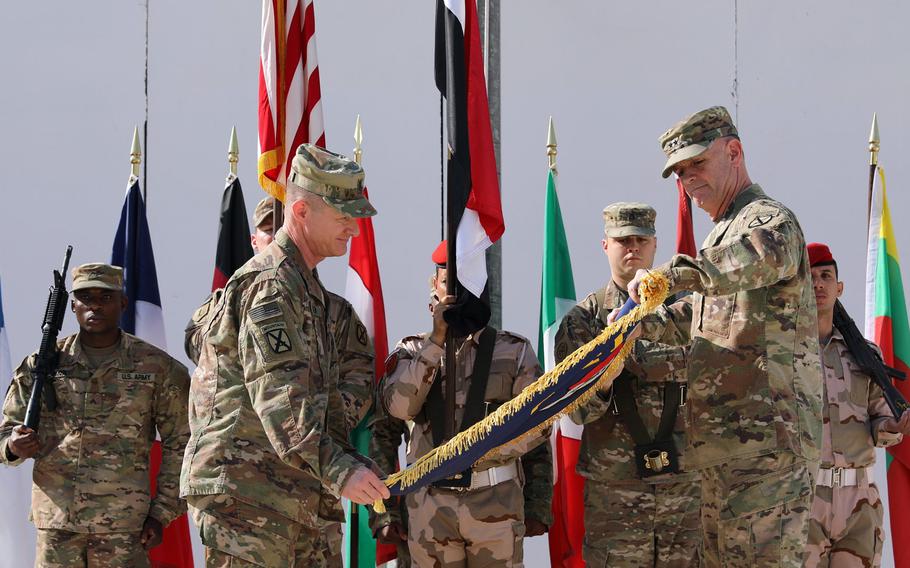 The combined joint forces command responsible for land operations in Iraq deactivated Monday in Baghdad, signaling the end of major combat operations against the Islamic State in that country.

“Casing the CJFLCC colors is a symbolic gesture, honoring the perseverance and sacrifice of our coalition partners,” Piatt said in a statement. “Thanks to our partnered success, we are able to continue to support the government of Iraq under the command of CJTF-OIR.”

Officials said the deactivation was a sign of the coalition’s commitment to reducing command structures as the coalition’s role shifts from supporting combat operations to building up Iraq’s security capabilities. Since 2014, Iraqi forces backed by the U.S. and its coalition allies have cleared ISIS from nearly all of the wide swath of territory it once held in the country.

The land component had partnered with Iraqi security forces, including the country’s Counter Terrorism Service, and the Kurdish forces known as peshmerga, to provide training, battlefield advising and other military support. It also provided diplomatic, economic and law enforcement assistance for Iraq’s counter-ISIS efforts.

Normal life is returning to many of the liberated areas, coalition spokesman Col. Ryan Dillon told Pentagon reporters. However, efforts to eliminate the last remnants of the terrorist group were continuing in Iraq and neighboring Syria in order to prevent a resurgence, he said. The group recently threatened Iraqis who take part in their country’s upcoming elections.

“As far as the ISIS threat … we know that they want to come back,” Dillon said. “It’s the Iraqi security forces identifying these threats and doing something about them before they become an attack or a spectacle, a large attack.”

U.S. troops began drawing down in Iraq earlier this year, and some equipment and personnel have been shifted to Afghanistan, where the fight against the Taliban and a local ISIS affiliate have been stepped up. Officials have said U.S. forces will remain in Iraq depending on conditions on the ground and the Iraqi government’s needs.

In a statement, Brig. Gen. Yahya Rasool Abdullah, spokesman for the Iraqi security forces, praised the commitment and professionalism of the coalition’s troops and said he looked forward to a partnership “that will endure for years to come.”

“Iraq is immensely grateful for their sacrifice and dedication in this task,” he said. garland.chad@stripes.com