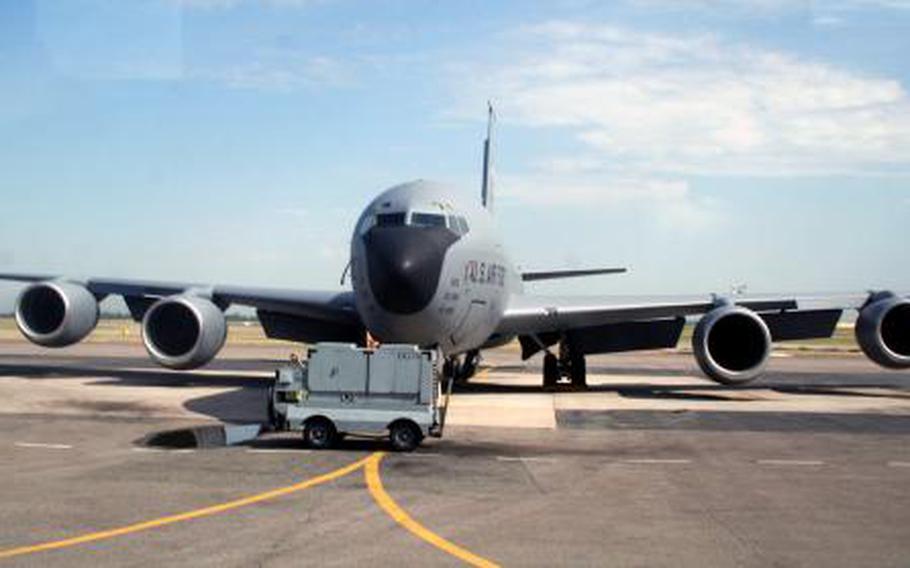 A KC-135R Stratotanker deployed to the 376th Air Expeditionary Wing is parked on the flightline at the Transit Center at Manas, Kyrgyzstan, June 7, 2011. The 376th AEW supports Operation Enduring Freedom and other operations in the U.S. Central Command area of responsibility. (COURTESY OF THE U.S. AIR FORCE)

The winner of Kyrgyzstan's presidential election says the U.S. military's base at Manas needs to close in 2014, coinciding with the drawdown of U.S. troops in Afghanistan, according to the Associated Press.

Enemies of the United States could choose to attack the base, posing a security risk to Kyrgyzstan, said Almazbek Atambayev, who received more than 60 percent of the ballots in Sunday's election, the Associated Press reported.

"We know that the United States is often engaged in conflict. First in Iraq, then in Afghanistan, and now relations are tense with Iran," Atambayev said. "I would not want for one of these countries to launch a retaliatory strike on the military base."

This is not the first time the U.S. military has faced the prospect of losing Manas, a major hub for troops and equipment going into Afghanistan. The Kyrgyz government voted in February 2009 to close the base, but they later agreed to allow the base to remain open after the United States agreed to pay more in rent.

Read 'Kyrgyz election winner says US base poses risk ' by the Associated Press.