Klag’s Restaurant in Rodenbach is worth the splurge Klags in Rodenbach has a nice shaded deck and a diverse menu. (Brian Ferguson/Stars and Stripes)

Klags in Rodenbach has a nice shaded deck and a diverse menu. (Brian Ferguson/Stars and Stripes) The saddle of lamb with herb crust, accompanied by fried potatoes and green beans, was tender and juicy. (Brian Ferguson/Stars and Stripes) Nestled in a neighborhood by a park, Klag?s is in a big building with a small sign. (Brian Ferguson/Stars and Stripes) The outdoor beer garden and seating area at Klags restaurant in Rodenbach. (Brian Ferguson/Stars and Stripes) 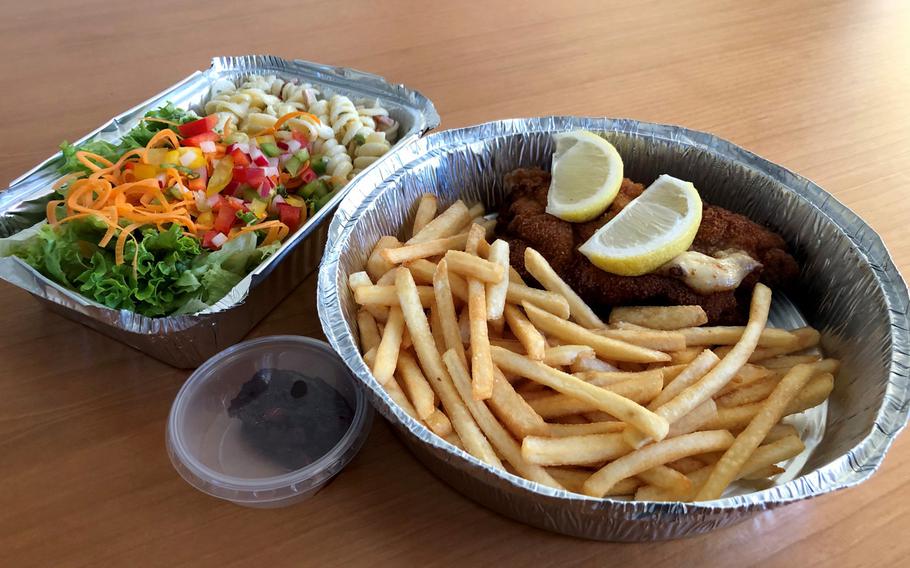 The Klag's restaurant Thursday lunch special of chicken cordon bleu comes with fries and a salad for 8.50 Euro. (Brian Ferguson/Stars and Stripes)

I wasn’t looking for lamb, but I found it at Klag’s Restaurant in Rodenbach.

Usually, I go for the rump steak when I eat out, but I saw the lamb and thought, “I’ve never had restaurant lamb.”

Nestled in a neighborhood by a park, Klag’s is in a big building with a small sign. If you didn’t know it was there, you wouldn’t notice it. As my family is out of town, I went alone on a Wednesday. It was not crowded.

The German-style restaurant has a two-sided menu with a diverse selection of foods. A few of the main courses are salmon filet, ham omelet, pork cutlet, steak and saddle of lamb. Soups, salads, appetizers and desserts round out the selections.

At 27 euros, the saddle of lamb with herb crust, served with fried potatoes and green beans, was the most expensive item on the menu. And it was worth every penny. The lamb was tender and juicy, the potatoes were crispy and the green beans were fresh.

Bread with a sour cream sauce was served as a starter at no additional cost.

The seating at Klag’s is all outdoors. I sat on the shaded deck in front, but there are also white tents set up on the side of the building. I never went inside, but it seemed fancy. Patrons also have the option to call in an order and pick it up.

The restaurant has implemented hygiene measures, such as setting tables an acceptable social distance apart. As the menu was in German, I required a little help to order. The server, who was pleasant, timely and wore a mask, recommended the lamb.

There is street parking for the restaurant, but on a busy night it will fill quickly. There is also a parking lot about 100 meters down the road.

I went back the next day and ordered the chicken cordon bleu lunch special. It came with a salad and fries and was exactly what I expected — filling, especially for 8.50 euros.

I enjoyed my dinner visit and stayed for about an hour. I would have stayed longer, but for the one problem I had with Klag’s: The beer wasn’t cold enough.

Prices: For entrees, between 10 and 27 euros; 8.50 euros for the weekday lunch special