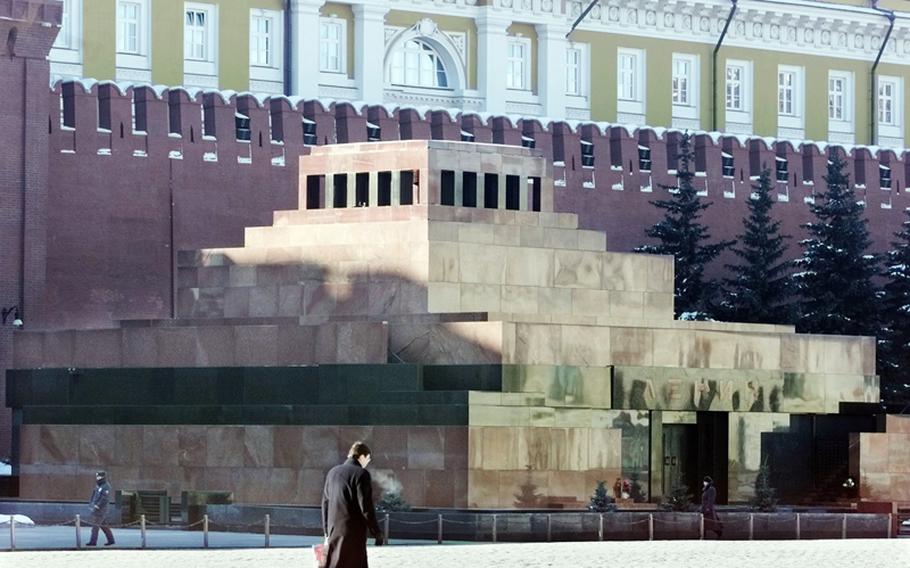 The body of Vladimir Lenin, displayed in this mausoleum in Moscow's Red Square, is still in good shape due to periodic makeovers by Russian scientists. The founder of Soviet communism died in 1924. (Igor Tabakov/KRT 2004 file photo)

SEOUL, South Korea &mdash; North Koreans bid an emotional farewell last month to deceased leader Kim Jong Il, but thanks to the wonders of science they will still be able to see him for years to come.

Kim reportedly will become the latest in a short line of dead world leaders whose bodies have been preserved for permanent public display.

Why turn your deified head of state into part tourist attraction, part science experiment and frequent target of humor and derision? Wouldn&rsquo;t a nice statue be a more dignified way to honor him?

Political experts say leaders&rsquo; bodies are sometimes preserved to validate the godlike status they received &mdash; or bestowed upon themselves &mdash; while they were alive, and/or to justify the succession of power in places without elections.

Referring to most of those whose bodies have been preserved for posterity, Brendan Howe, a Seoul-based professor of international relations for Troy University, said: &ldquo;None of these countries have elected leaders. They don&rsquo;t have legitimacy by express will of the people.&rdquo;

&ldquo;A lot of this is (about) contributing to the mystique of the state,&rdquo; he said. The common theme among most of the countries with the bodies of dead leaders on display is this continuity &mdash; &ldquo;That you can point to the father of your nation and say, &lsquo;Look, he&rsquo;s still there. He&rsquo;s still with us. We are still ruling in his name. We are the legitimate heirs of his power.&rsquo;&rdquo;

Displaying the body of Kim Jong Il, along with the body of his father, North Korea&rsquo;s founder Kim Il Sung, might be &ldquo;weird from an international perspective,&rdquo; according to Hwang Jihwan, an international relations professor at the University of Seoul, but it can be an effective way to support Kim Jong Un&rsquo;s budding third generation of the family&rsquo;s rule.

&ldquo;North Korea is an unusual case, even different from other existing socialist states,&rdquo; he said. &ldquo;They may think it is very helpful to secure stability in domestic politics by idolizing and deifying the leader.&rdquo;

Having the bodies of Kim Jong Un&rsquo;s father and grandfather on public display &ldquo;can serve as a device for inhibiting &hellip; traitorous actions and ensuring people&rsquo;s loyalty by reminding them&rdquo; about his lineage, Hwang said.

Among the bodies whose decay has been delayed for display is that of China founder Mao Tse-Tung, who ran that country from 1949 until his death in 1976.

Despite his wish to be cremated, his body has for decades been on almost daily display in a crystal coffin at the Chairman Mao Memorial Hall in Beijing&rsquo;s Tiananmen Square. Admission is free, so visitors have more money to spend at the Mao souvenir shop inside the hall.

The body of Russian Marxist revolutionary Vladimir Lenin has been on display at Lenin&rsquo;s Tomb in Moscow&rsquo;s Red Square since shortly after his death in 1924.

A Time travel story said the tomb is &ldquo;super-kitschy but worth the visit.&rdquo;

In Hanoi&rsquo;s Ba Dinh Square, the body of Ho Chi Minh &mdash; who served as North Vietnam&rsquo;s president from 1945 to 1969 &mdash; is available for regular public viewings.

His body was turned into a glorified tourist attraction despite the fact that he, too, reportedly asked in his will that he be cremated and his ashes spread over the hills of Vietnam because he felt that was &ldquo;more hygienic than burial and would also save land for agricultural purposes.&rdquo;

In the Philippines, the body of Ferdinand Marcos &mdash; dictator from 1965 to 1986 &mdash; has been on display since 1993 in a refrigerated crypt in Batac, Ilocos Norte, where the controversial leader in life has managed to stir up controversy years after his death.

Ferdinand Marcos Jr., a senator there, said his father deserves to be buried in a Manila cemetery for national heroes. But last year, President Benigno Aquino III reportedly said to bury Marcos with such honors would be the &ldquo;height of injustice&rdquo; to the victims of his tyrannical reign.

After visiting the crypt a couple of years ago, Joyce Ann Burton, a former fashion model for Marcos&rsquo; wife, Imelda, wrote in a blog that he looked better dead then he did alive.

&ldquo;I wondered if they used Botox or some poofy chemical to make his face look so full and young,&rdquo; she wrote. &ldquo;Well, they say that they keep him coated with a layer of wax &hellip; like an American apple.&rdquo;

In the case of Kim Jong Il, Korean media outlets have reported that a dream team of Moscow-based embalmers, who usually tend Lenin&rsquo;s body, were dispatched to North Korea to prepare the body.

Hwang Kyusung, dean of the Funeral Science Department at the Eulji University in Sungnam, said preserving a body in such a case is an involved process, during which a variety of chemicals and solutions are put in and on the corpse to control the smell and discoloration that come with decomposition.

The initial preparation of the body reportedly costs about $1 million, and the maintenance thereafter will be $800,000 per year.

Speculation is that Kim Jong Il&rsquo;s body will be placed next to that of his father in Kumsusan Memorial Palace in Pyongyang.

Yoo Chan-yul, a political science and diplomacy professor at the Duksung Women&rsquo;s University in Seoul, said Kim Jong Un is &ldquo;vulnerable,&rdquo; given his youth and inexperience, so keeping the bodies of his father and grandfather around &ldquo;will help stabilize the system and justify the succession of power to a third generation.&rdquo; However, Howe said, there is a potential for backlash there and in other countries where deceased political leaders remain on display &ldquo;well past their sell-by dates.&rdquo;

&ldquo;The fact is that if you see them in the flesh, so to speak, they may be underwhelming,&rdquo; Howe said. &ldquo;It may demystify their leadership.&rdquo;

For example, in the case of the diminutive Kim Jong Il, he said, &ldquo;Embalming can&rsquo;t make him any taller.&rdquo;