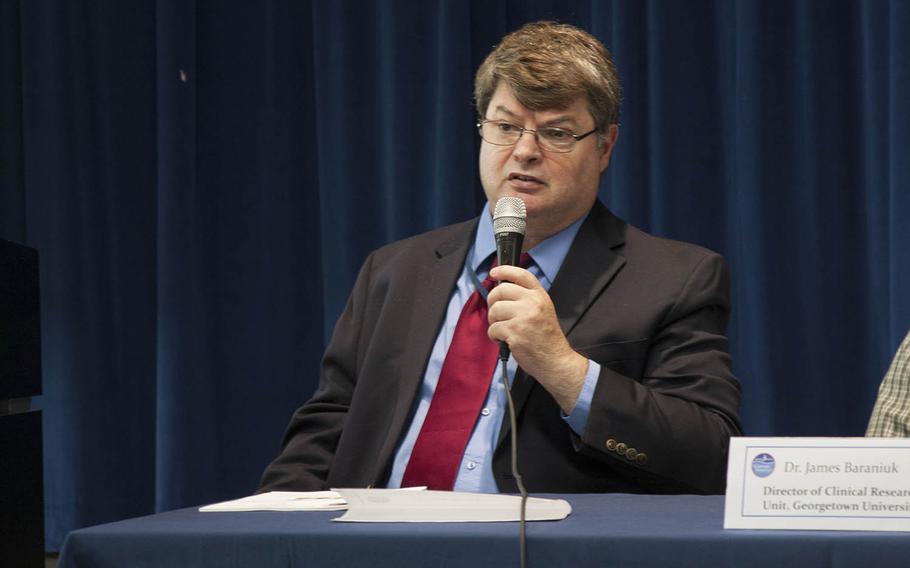 James Bunker, executive director of the National Gulf War Resource Center, gives advice to veterans in Tampa, Fl. on Friday, Nov. 3, about submitting claims to the Department of Veterans Affairs for disability compensation. The Government Accountability Office reported this year that the VA denies more than 80 percent of veterans' claims for Gulf War-associated illnesses. (Nikki Wentling/Stars and Stripes)

James Bunker, executive director of the National Gulf War Resource Center, gives advice to veterans in Tampa, Fl. on Friday, Nov. 3, about submitting claims to the Department of Veterans Affairs for disability compensation. The Government Accountability Office reported this year that the VA denies more than 80 percent of veterans' claims for Gulf War-associated illnesses. (Nikki Wentling/Stars and Stripes) 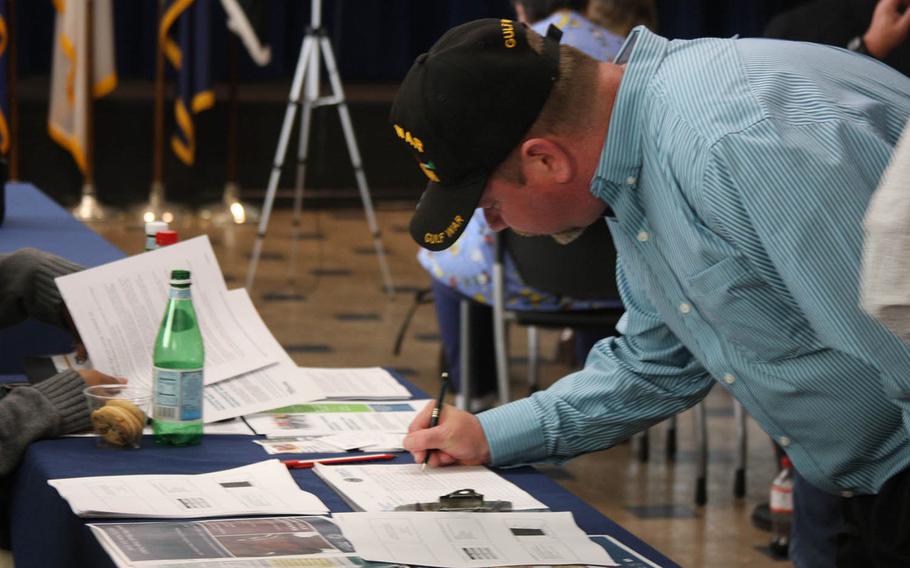 Shawn Scott, a veteran of Desert Storm and Desert Shield, signs up for a clinical trial Friday, Nov. 3, at the Gulf War Illness Awareness Conference in Tampa, Fl. Scott organized the conference with the purpose of teaching VA health care providers about Gulf War Illness and increasing veterans' likelihood for getting connected to benefits. (Nikki Wentling/Stars and Stripes) 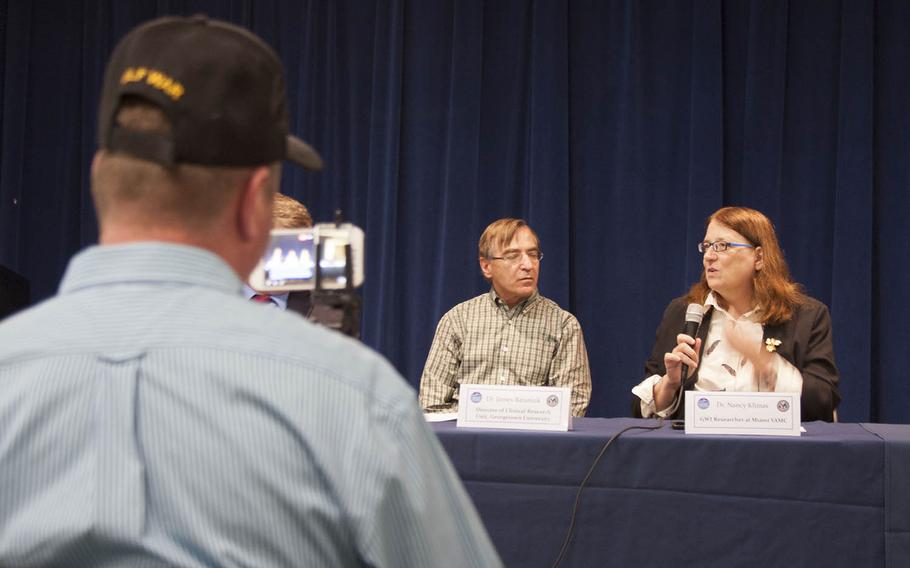 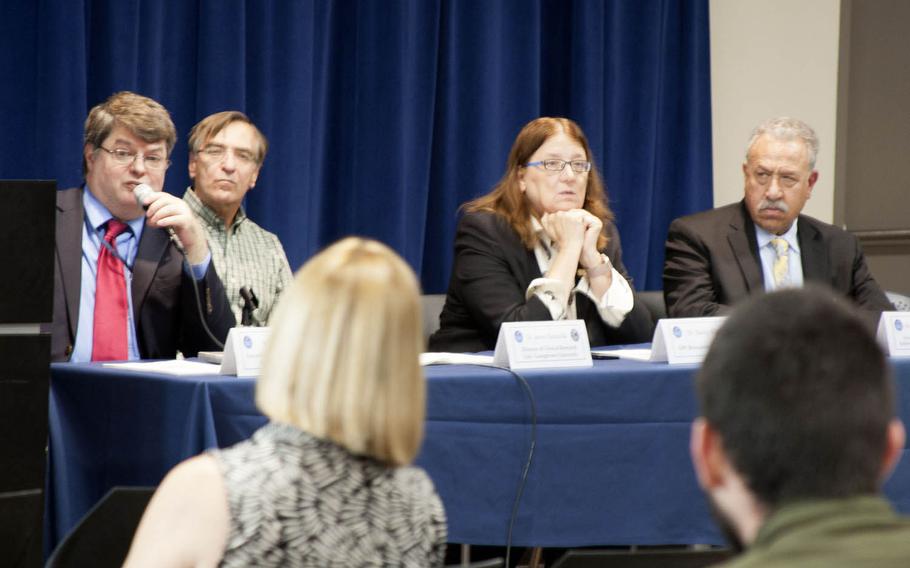 James Bunker, executive director of the National Gulf War Resource Center, answers a question from the crowd Friday, Nov. 3 at the Gulf War Illness Awareness Conference. The conference was arranged to address the lack of understanding about Gulf War Illness among VA doctors and patients. (Nikki Wentling/Stars and Stripes) 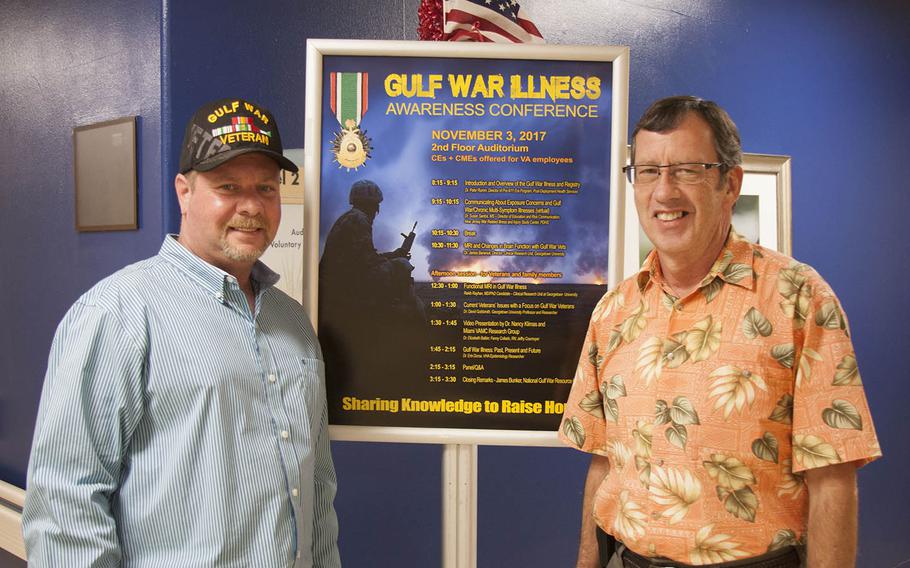 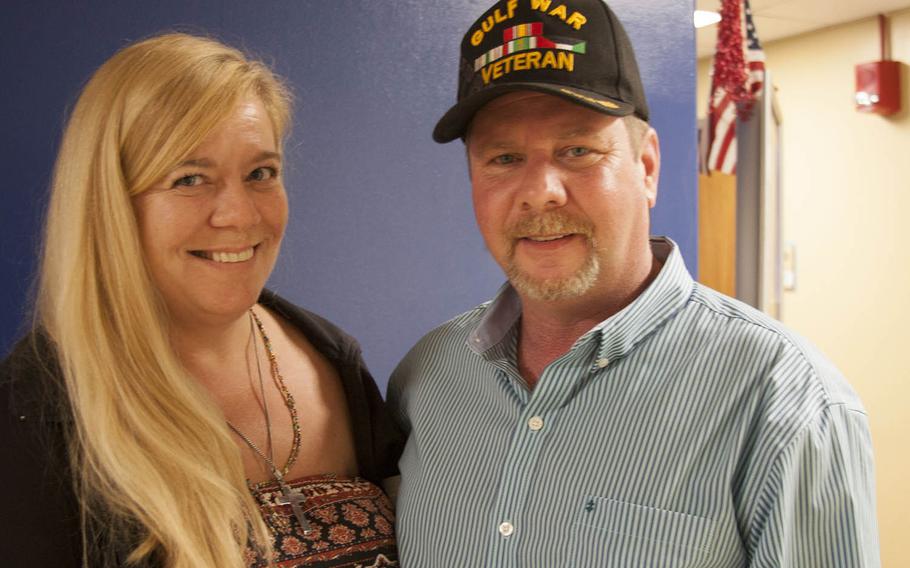 Dana Whitten and Shawn Scott, both Gulf War veterans from Florida, met for the first time Friday, Nov. 3 at the Tampa VA hospital for the Gulf War Illness Awareness Conference. They both suffer effects of toxic exposure from their military service and had been in contact through Facebook groups before the summit. (Nikki Wentling/Stars and Stripes) 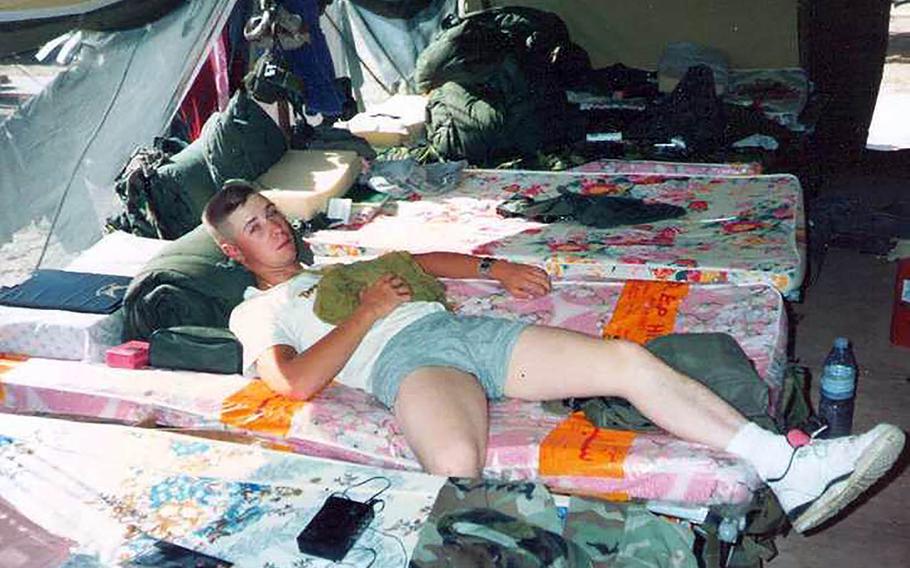 Army Specialist Shawn Scott pictured on Jan. 19, 1991, the day after he was exposed to toxins during a scout mission into Iraq. Scott, of Spring Hill, Fl., now suffers from Fibromyalgia, cognitive impairment and other conditions that the VA has linked to his Gulf War service. (Photos courtesy of Shawn Scott) 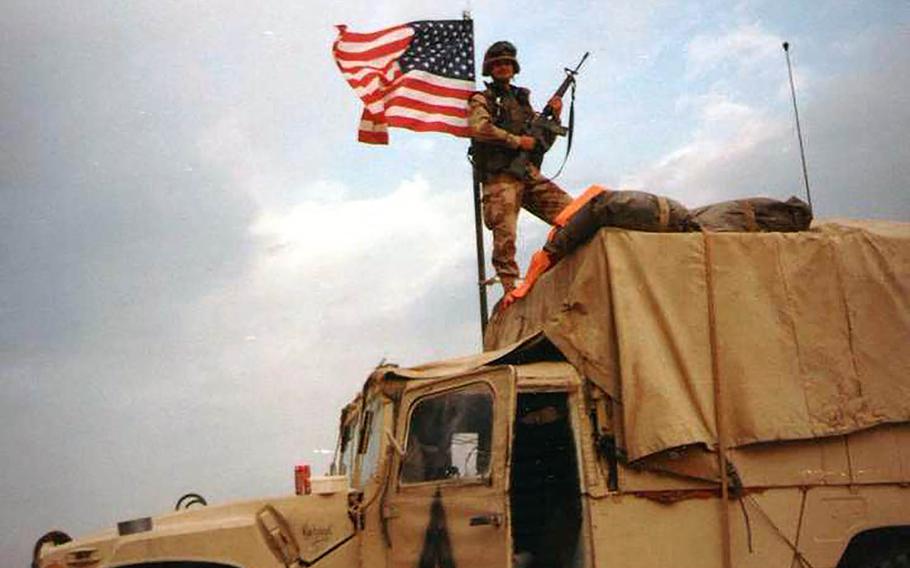 Shawn Scott, an Army specialist, pictured here in 1991 during Operation Desert Storm and Desert Shield. Scott says he was exposed to toxins during a scout mission in Iraq that left him dizzy and nauseated and led to chronic medical conditions. He's behind a grassroots effort to help educate VA doctors about Gulf War Illness in order to improve treatment for himself and other veterans. (Photos courtesy of Shawn Scott)

TAMPA, Fla. — Of all that was revealed by a government watchdog this year about how the Department of Veterans Affairs treats Persian Gulf War veterans, the most shocking to Shawn Scott was the discovery that most doctors aren’t trained about illnesses specific to veterans of that era.

That pushed Scott, an Army veteran, to organize a Gulf War Illness Awareness Conference at his local VA hospital in Tampa, Fla., on Nov. 3, featuring VA officials and top clinical researchers. He wanted to help VA medical providers better understand the cluster of conditions known as Gulf War illness, so they could improve care for vets like him.

“This all stems from wanting to educate the providers here,” Scott said. “In the five years I’ve been dealing with the VA, they’ve been phenomenal. But every time I went to see a doctor, I’d say I had Gulf War illness and they’d say, ‘What’s that?’ ”

Thousands of the 700,000 servicemembers who deployed for Operation Desert Storm and Operation Desert Shield suffer from an amalgam of chronic, unexplained illnesses including fibromyalgia, fatigue and gastrointestinal disorders.

The VA dedicated a research team to Gulf War illness, and it has initiated dozens of clinical trials — some of which Scott has volunteered for over the years. The agency has spent millions of dollars to fund studies, and officials at VA headquarters in Washington are involved in biweekly calls and quarterly meetings on the issue.

Dr. Peter Rumm, director of the VA’s pre-9/11 environmental health program, described some of their research as “cutting edge.”

But the information gathered by researchers and VA officials isn’t always translated to health care providers who work with veterans.

A report by the Government Accountability Office this summer showed 90 percent of VA medical examiners had not been trained on how to conduct exams for Gulf War illness. Veterans at the Florida conference criticized their VA providers for a lack of understanding.

Scott, who suffers from a list of medical conditions linked to his service, is one of several Gulf War veterans spread across the country stepping up to bridge that information gap.

Searching for answersScott was an Army specialist and part of the Military Police Corps for several years in the 1980s and ’90s. He was on convoy security during a deployment in 1991, going between Saudi Arabia, Iraq and Kuwait.

One day in January, Scott remembers feeling dizzy and nauseated on a mission into Iraq. He and his team put on their Mission Oriented Protective Posture gear — intended to be used in toxic environments — and were given water and a mild painkiller back on base. The next day, Scott woke up ill, he said.

Scott, now 47 and living in Spring Hill, Fla., with his wife and their five kids, believes that incident is to blame for some of his diagnosed medical conditions. He’s worked for the past several years to get service-connected benefits through the VA, and he’s on 100 percent disability. He has sleep apnea, fibromyalgia, hearing loss, cognitive impairment and a long list of other health problems.

He’s been part of studies with VA researcher Nancy Klimas and James Baranuiuk, a researcher with Georgetown University who’s made breakthrough discoveries about Gulf War service resulting in certain medical conditions. In 2013, Baranuiuk led a study that found evidence of brain damage in Gulf War veterans. The discovery meant the illness is not psychological.

“Nowadays I’ve dedicated myself to being a guinea pig, to be an advocate,” Scott said.

Klimas and Baranuiuk attended the Florida conference, and they’re still working to find out more about toxic exposures during the Gulf War. After the report this summer from the GAO, VA officials in Washington increased their own studies. They want to find a single definition for Gulf War illness that could help with diagnosis. The process is expected to take several years, and it’s already been attempted. In 2014, the VA spent about $2 million to fund an Institute of Medicine report on the issue. The committee couldn’t determine a single case definition.

“It would be a real step forward,” Rumm said. “We’re going to give it our best effort. It’s kind of an enigma why we still have this undefined problem and why we haven’t come farther.”

After Klimas spoke Nov. 3 about more than a dozen clinical trials she’s working on, veterans in attendance flooded her table in one corner of the auditorium at the Tampa VA hospital.

More evidence might not lead to a cure, although Klimas is working toward one, she said. But it could lead to a better understanding and improved treatment for veterans’ symptoms.

The information could be used to help connect veterans to VA benefits, too. The GAO report found the VA denies more than 80 percent of veterans’ claims for Gulf War-associated illnesses. The agency has responded that the low approval is due to the complexity of the illness. Baranuiuk encouraged Gulf War veterans to continue volunteering for studies.

“Everything I know about Gulf War illness I learned from you guys,” he said. “So please keep teaching us. Stay vocal. Stay in touch, and keep fighting.”

The Research Advisory Committee on Gulf War Veterans’ Illnesses, which comprises veterans and medical experts, is suggesting the VA boost its research. At one of their meetings earlier this month, the committee recommended the agency tie research more closely to clinical treatment and asked the VA to develop a pilot project by 2019 that would include centers where research and treatment can happen at the same time.

Jim Bunker, executive director of the National Gulf War Resource Center, is on the committee.

“We need to know how to diagnose these illnesses,” Bunker said. “This is a problem.”

‘Trying to get better’A few years ago, Scott met Roger Graves, a registered nurse at the Tampa VA hospital, and the two became friends. Graves introduced Scott to Klimas, and that’s how he became part of her study at the Miami VA. Graves and Scott traveled back to Miami last year for a conference on Gulf War illness.

It gave Scott the idea for the conference he organized Nov. 3, and now he wants to replicate the event every year.

About 100 people showed up, including nurses, physicians, psychologists, social workers and veterans. The health care providers who attended were given training credits.

Rumm said the conference was one piece of a larger effort the VA is making to educate their health care providers. He said the agency has increased webinars, and there will be a conference in St. Louis this summer about Gulf War illness.

Jennifer Gkourlias, a principal in a Rochester, N.Y., school district, traveled to Florida for the conference. One of her longtime friends served in the Gulf War and later died. He had been trying to have the VA acknowledge his medical conditions as tied to his service, Gkourlias said. At the time, she hadn’t been in touch with her friend for several years, and she’s never known the full story.

Now, she’s trying to talk to as many Gulf War veterans as possible and gather their stories about toxic exposure to bring awareness to the problem.

“I’m telling it through the eyes of the veteran, what they’ve gone through and what they’ve been exposed to,” Gkourlias said. “His spirit is pushing me to do it.”

She spoke with Dana Whitten, an Army National Guard veteran who came from Pensacola to attend. Whitten agreed to speak with Gkourlias and also signed up for a couple of clinical trials. She met people she had only known through social media groups for Gulf War veterans. Whitten suffers from chronic fatigue and other conditions linked to her service, she said.

Another frustrated veteran stood up at the conference to share his experience with VA doctors and the yearslong process to gather his conditions under the umbrella of Gulf War illness.

“Why can’t we get understanding?” the veteran asked.

To learn more The National Gulf War Resource Center publishes a self-help guidebook each year, filled with information about what Persian Gulf War veterans need in order to file a claim for VA health care and compensation benefits, as well as a step-by-step process for how to apply.