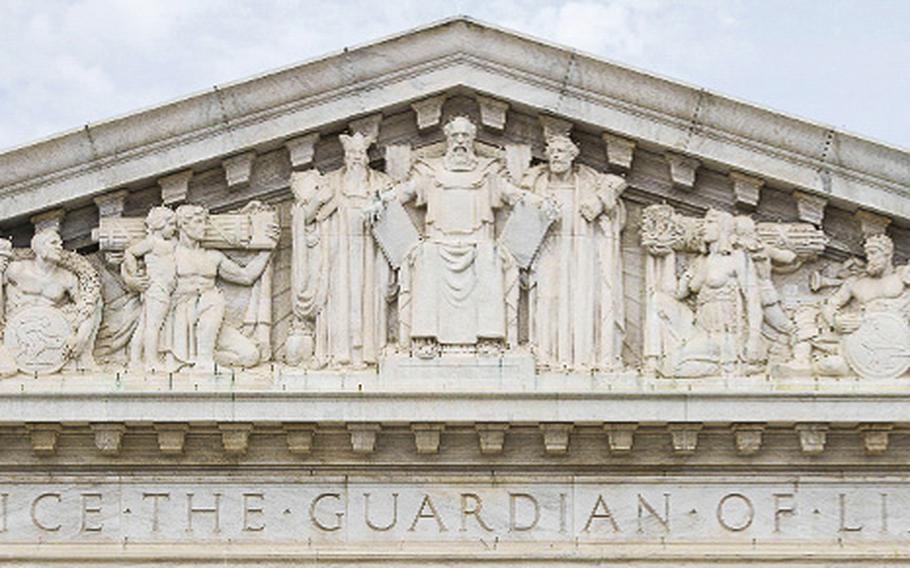 State courts cannot order military retirees to divide their disability pay with ex-spouses to compensate for a drop in shared retirement triggered by the disability compensation award, the U.S. Supreme Court has ruled.

The Howell decision directs courts in Arizona and perhaps 30 other states to modify their interpretation of federal law regarding division of military retirement as marital property when retirees, after divorce, become eligible for disability pay from the Department of Veterans Affairs (VA) and must waive a portion of retired pay shared with their former spouses to accept the tax-free payments.

Under current law this occurs for retirees with VA disability ratings of 40 percent or less, and ailments or injuries unrelated to combat or combat training. More severely disabled retirees and those with combat-related injuries can receive disability compensation without a dollar-for-dollar offset to retired pay. So, their former spouses don’t see retired pay shares fall due to a disability-pay offset.

For those who have seen, or will see, shared retired pay affected by disability pay, the Howell decision delivers a surprise victory for retirees. It forces family law courts to reconsider treatment of disability pay under the 1982 Uniformed Services Former Spouses Protection Act (10 U.S.C., Sec. 1408.).

Tech. Sgt. John Howell and wife Sandra divorced in 1991 after 13 years of marriage. A year later he retired from the Air Force and Sandra began receiving 50 percent of his retired pay. In 2005, John applied for and got a VA disability rating, of 20 percent, for a service-related shoulder injury, he told me. To accept $262 a month in VA compensation, John had to waive a matching amount of retired pay. Sandra’s share of his disposable retired fell by half that amount, or $131 a month.

The same law that allows state courts to divide “disposable retired pay” as property specifies that it exclude retired pay waived to accept disability pay. Indeed, the Supreme Court in its 1989 Mansell decision affirmed this exclusion.

Over the next 28 years, however, different states came to interpret Mansell differently. A majority concluded that only at time of divorce must judges view disability pay as excluded from property divisible with an ex-spouse. After divorce and military retirement shares are set, disability payments shouldn’t be allowed to reduce the value of the ex-spouse’s property, a majority of state courts decided.

That allowed family courts in many states to reopen divorce settlements for ex-spouses and issue “indemnity orders” that disabled retirees raise payments.

It happened with the Howells. An Arizona judge ordered John to reimburse Sandra an additional $131 month in retired pay lost to his disability compensation. John appealed and lost twice more. The U.S. Supreme Court agreed to review the Arizona Supreme Court’s denial of his appeal “because different state courts have come to different conclusions on the matter,” the high court explained.

In writing the lead opinion in Howell, Justice Stephen Breyer noted that in Mansell the Supreme Court held that federal law “completely pre-empts” states from treating waived retirement pay as divisible property. In reversing the Arizona decision, Beyer dismissed its argument, used by many courts since 1989, that Mansell doesn’t apply to Howell because the 1989 case involved waiver of retired pay before divorce, and Howell waived retired pay years after his divorce.

That “temporal difference,” Breyer wrote, “highlights only that John’s military retirement pay at the time it came to Sandra was subject to later reduction (should John exercise a waiver to receive disability benefit to which he is entitled.)”

The state court, Breyer wrote, “did not extinguish … that future contingency,” and “the value of Sandra’s share of military retirement pay was possibly worth less — perhaps less than Sandra and others thought — at time of the divorce.”

Breyer acknowledged the hardship that “congressional pre-emption” of family court rulings “can sometimes work on divorcing spouses. But we note that a family court, when it first determines the value of a family’s assets, remains free to take account of the contingency that some military retirement pay might be waived … when it calculates or recalculates the need for spousal support.”

Washington, D.C., attorney Adam G. Unikowsky argued for John Howell before the Supreme Court in March. Howell’s experience, he said, was similar to that of many retirees over almost three decades, depending on where they divorced.

“The specific scenario came up over and over again [and] divided lower courts. Now there’s no more division. The effect of this Supreme Court decision is that this issue has been resolved nationwide, at least under federal law. If the issue of disability arises after divorce, and the amount of military retirement pay goes down as a result of a waiver, payments to the veteran and ex-spouse go down and the veteran keeps all the disability pay. That’s the practical effect of the ruling.”

Effective immediately, courts must protect the value of disability pay and not “indemnify” ex-spouses from loss of retired pay with new or adjusted property right, Unikowsky said. But whether states apply Howell retroactively to nullify existing orders protecting ex-spouse payments is unclear, he added.

“That’s probably a question of state law rather than federal law. Some states are pretty rigorous and rigid that once a judgment is final, it’s final. They’re not going to reopen it just because it was wrong when it was entered. It will depend really on state law governing the finality of judgments.”

Marshal Willink, a prominent Las Vegas attorney who has written books and given frequent talks on divorce and military retirement, agreed that Howell likely won’t result in many divorce settlements being reopened. That view, he said, was reinforced in a recent conference call with one family law expert who studied the wave of retirees who tried but failed to modify court orders after Mansell. Family courts cited the doctrine of res judicata, which generally prevents civil cases, once decided on their merits, from being litigated a second time.

Willink said the Howell decision surprised him. It reversed “the overwhelming majority position” of state courts since 1989, “that if a court has already distributed a retirement benefit, and one party retroactively takes some step to alter the distribution, that party has to make it up to whoever you take money from.”

Lawyers will need to change strategies to protect future clients, he said. For example, in states that allow alimony, Willink will advise military spouses during divorce to seek not only a share of retirement but also an award of at least one dollar of alimony so that alimony payment can be adjusted with relative ease if the retiree later opts to waive retired pay to accept VA disability compensation.