‘Just Cause 3’ a rollicking adventure in destruction 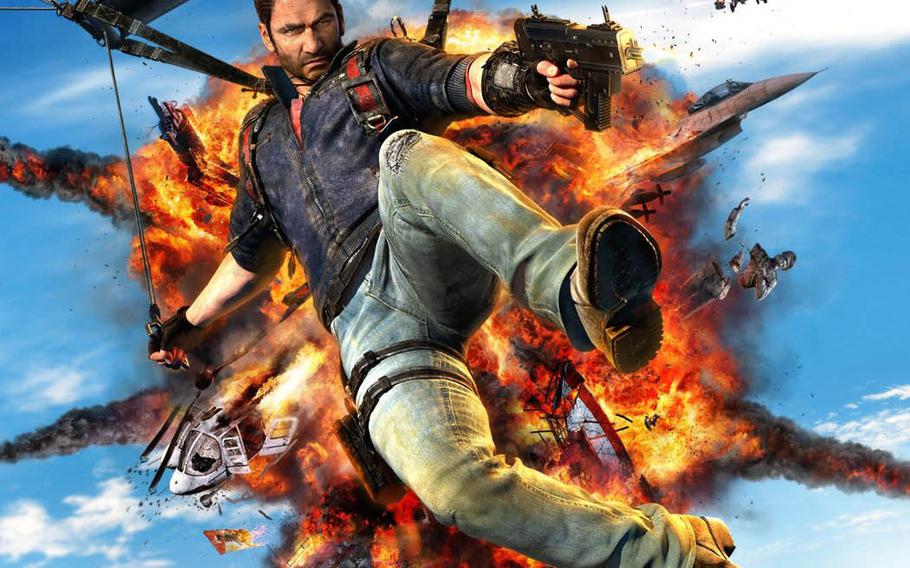 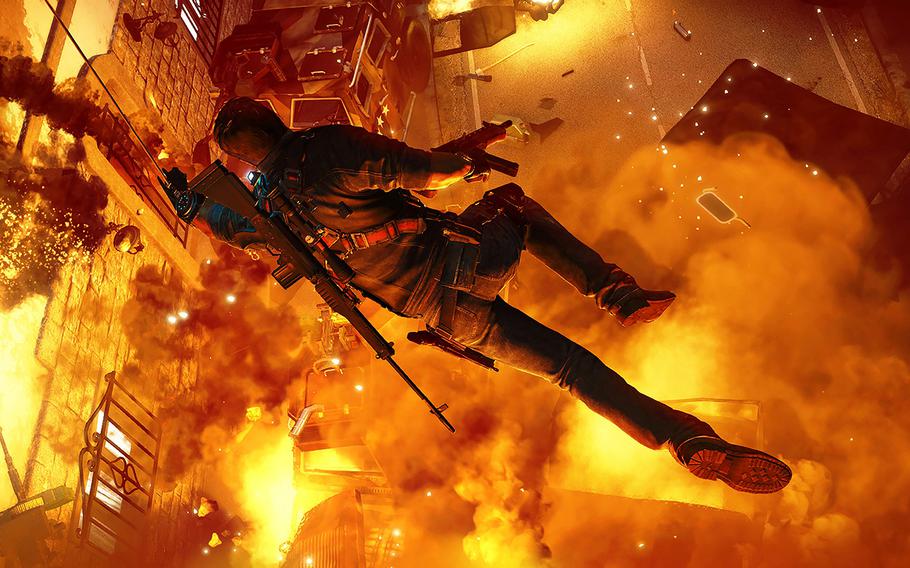 Destruction might as well be the name of the game in "Just Cause 3." (Square Enix) 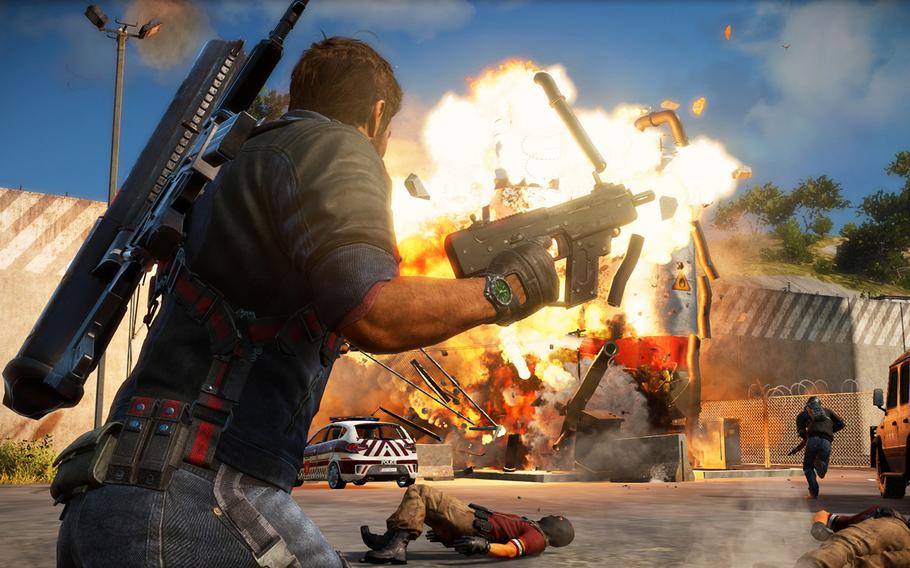 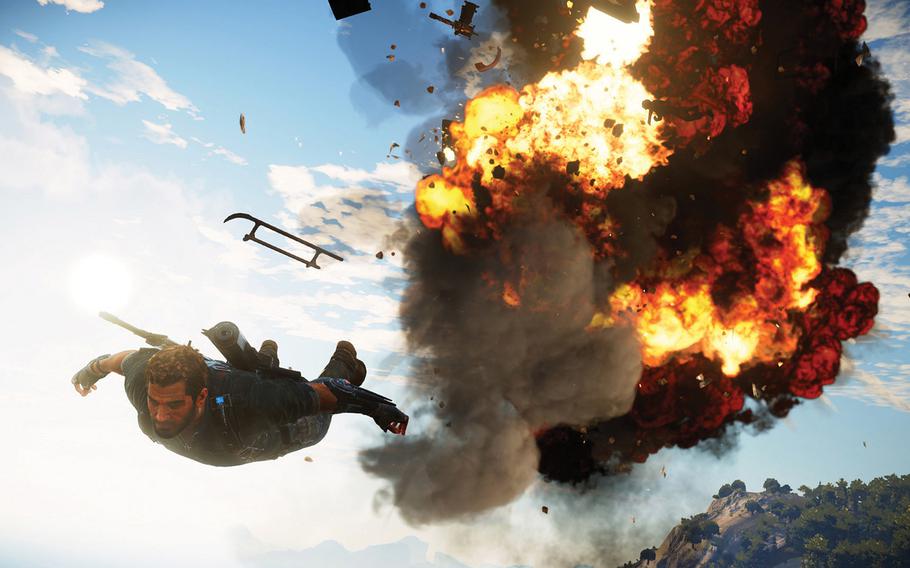 Explosions and unlikely stunts abound in "Just Cause 3." (Square Enix) 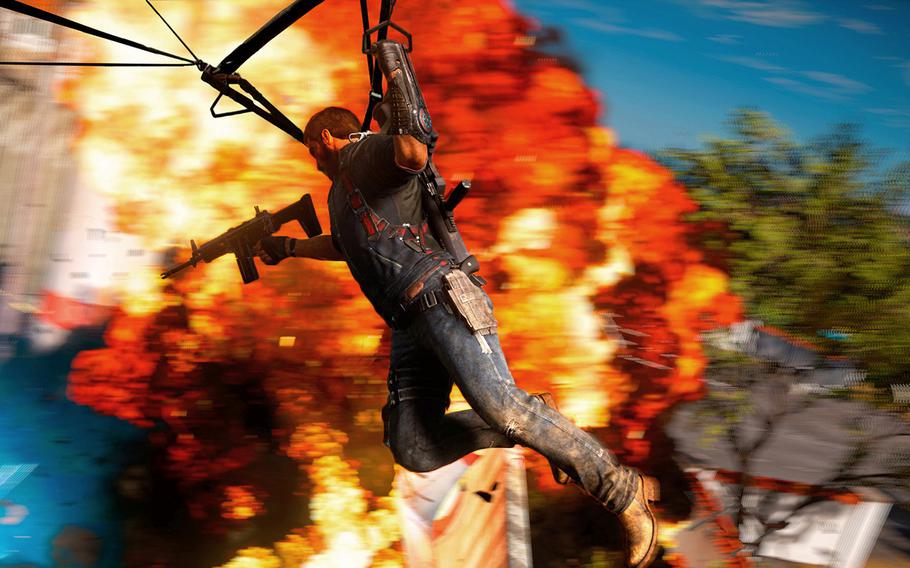 "Just Cause 3" always seems to come up with yet more weapons and explosions. (Square Enix) 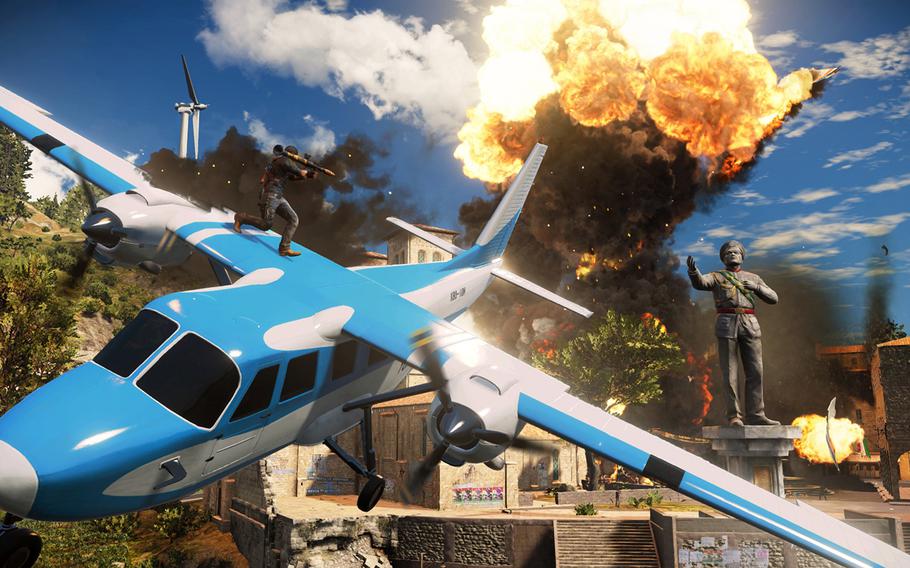 Players can balance on the wing of a plane while shooting bad guys in "Just Cause 3." (Square Enix)

Imagine trying to aim a rocket launcher while standing on the wing of a small plane as it flies through an intense anti-aircraft barrage.

The third installment of Square Enix’s wild action franchise takes operative Rico Rodriguez back to his homeland to settle scores with a ruthless dictator.

The game is set in the sun-baked Mediterranean island nation of Medici. The archipelago — which looks like a less-cheerful twin of Italy’s Amalfi Coast — covers almost 400 square miles and contains scores of towns, military bases and outposts, each of which needs to be liberated from the ill-tempered Gen. Di Ravello.

Rico’s escapade on the small plane happens about two minutes into the game and only hints at the spectacle of destruction and chaos lying ahead. His primary job seems to be hopping around the map and blowing things up until the dictator’s forces submit.

When the revolutionary hero arrives in a town or military base, a list of targets appears on the screen. These usually include fuel tanks, electrical substations, radar facilities and statues, billboards and loudspeakers that tout Di Ravello.

Although the official goal is deposing the dictator, the real goal is to cause as many explosions as possible. And Rico has a wide variety of options for accomplishing this. Machine guns and rocket launchers get the job done. Stealing an armored car or assault helicopter can be even more effective. But the most interesting option is Rico’s grappling device.

With the grappler, you can tether two items and then pull them together. If one of these items is an enemy soldier and the other is a fuel cylinder that can launch skyward when ignited, the results can be interesting. If one is an explosive barrel and the other is an electrical generator, the results can be spectacular. But one of the most amusing feats is sending an enormous spherical gas tank rolling across a base as it burns and explodes.

It’s generally most efficient — and entertaining — to combine all of your abilities and tools and let your creativity run wild.

However, since there are so many towns and bases, the action gets repetitive no matter how creative you are. Developers try to keep things fresh by adding more difficult foes and obstacles as the game progresses. Still, about halfway through the game, attacking yet another town sometimes feels more like a grind than a pleasure.

All this digital destruction serves some practical purposes. Liberating specific bases will unlock weapons and vehicles, such as jet fighters, assault helicopters and tanks. Liberating towns and bases also unlocks special challenges that involve flying, driving, destroying and zipping around with Rico’s wing suit. While these challenges pack a lot of entertainment value in their own right, they’re also worthwhile because they can unlock upgrades to Rico’s equipment.

Next to the destruction, the most entertaining aspect of the game is Rico’s means of transportation. His grappling device allows him to scale walls and cliffs with ease. When combined with an ever-present parachute, Rico can latch onto an elevated surface and hoist himself up and into the air. He then can glide off a short distance or deploy his wing suit and soar for a much greater distance.

Occasionally, Rico’s childhood friend, Mario, and other rebels pop up to give him missions that unlock new gear or advance the story, such as it is. The events that unfold aren’t so much a story as a related string of missions, but they give everything some context.

While the action can be wild, it doesn’t always flow very smoothly. During missions, cinematic cutscenes advance the action. However, these scenes can be preceded and followed by up 15 or 20 seconds of silence while the video loads. This can be especially irritating when the cutscene is simply a five-second clip showing enemies moving into position. Expect even longer loading times if Rico fails a task or dies and the entire game needs to reload.

Another technical issue can be a bit more amusing. The artificial intelligence isn’t particularly smart. As a result, it’s pretty common to see civilian drivers running over pedestrians, tanks driving straight down a cliff or helicopters colliding.

The controls are generally very good, allowing you to move freely throughout the world using a wide variety of methods. The only problem is that the airplane controls don’t match up with the helicopter controls, so that can cause a bit of confusion the first time you fly a plane.

The game earns a mature rating thanks to violence and strong language.

Bottom line: B “Just Cause 3” is a rollicking adventure in destruction, but even exploding oil refineries can get old after a while.Platforms: PlayStation 4, Xbox One, PCOnline: justcause.com

Ubisoft provided a review copy of this game.