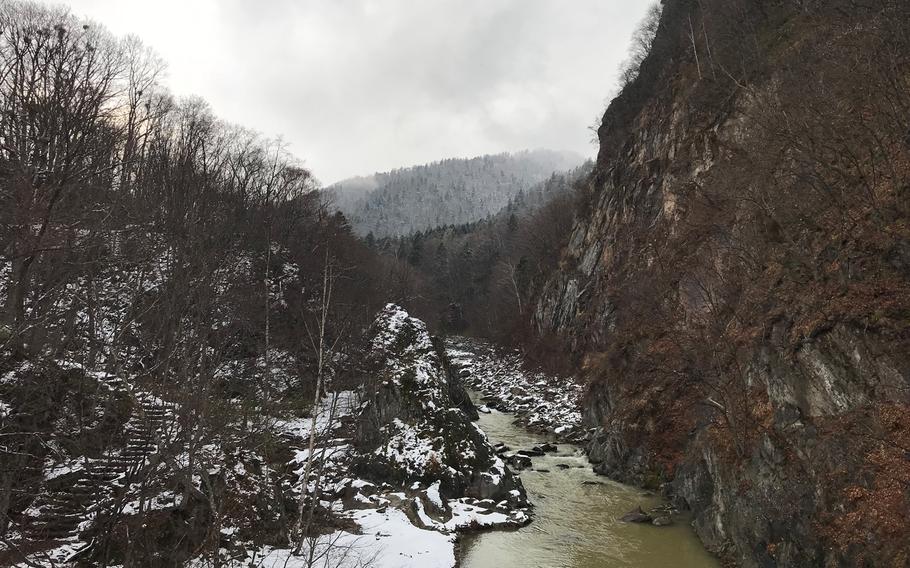 Standing on the Futami Suspension Bridge over the Toyohira River provides sweeping views of the Jozankei Onsen region. (Seth Robson/Stars and Stripes)

Standing on the Futami Suspension Bridge over the Toyohira River provides sweeping views of the Jozankei Onsen region. (Seth Robson/Stars and Stripes) 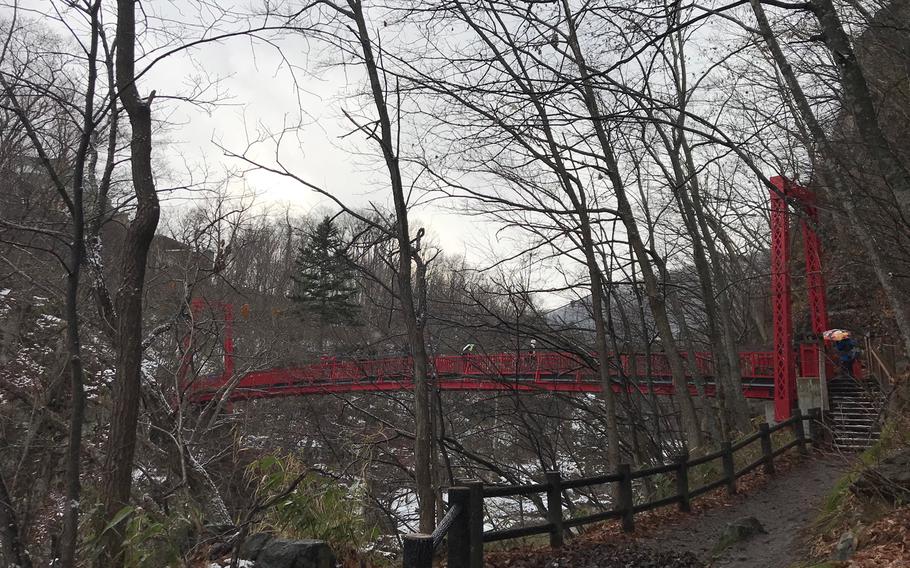 The Futami Suspension Bridge is a famous symbol of Jozankei Onsen and is often featured on tourism posters. (Seth Robson/Stars and Stripes) 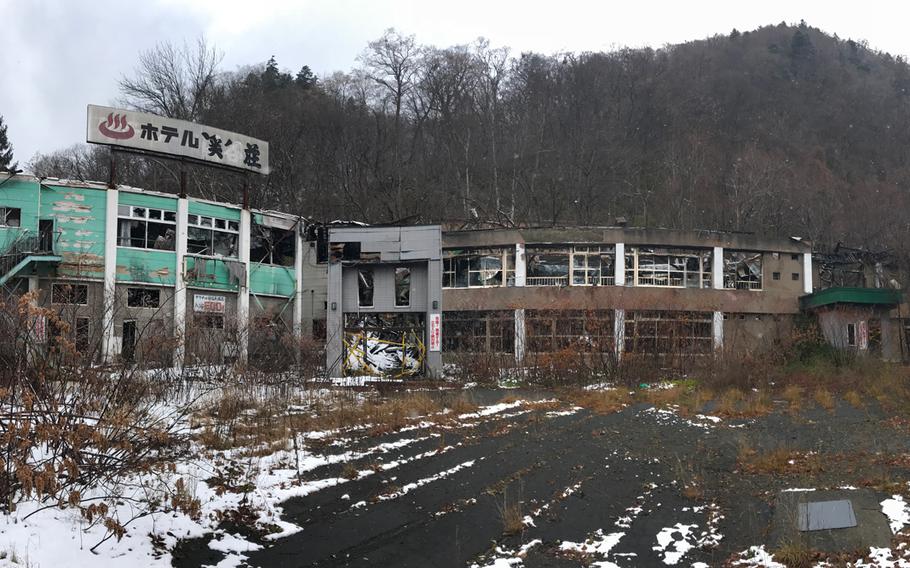 The influx of tourism to Jozankei Onsen in recent years has spurred construction of some impressive new hotels -- but visitors can see some of the older facilities while hiking around the area. (Seth Robson/Stars and Stripes) 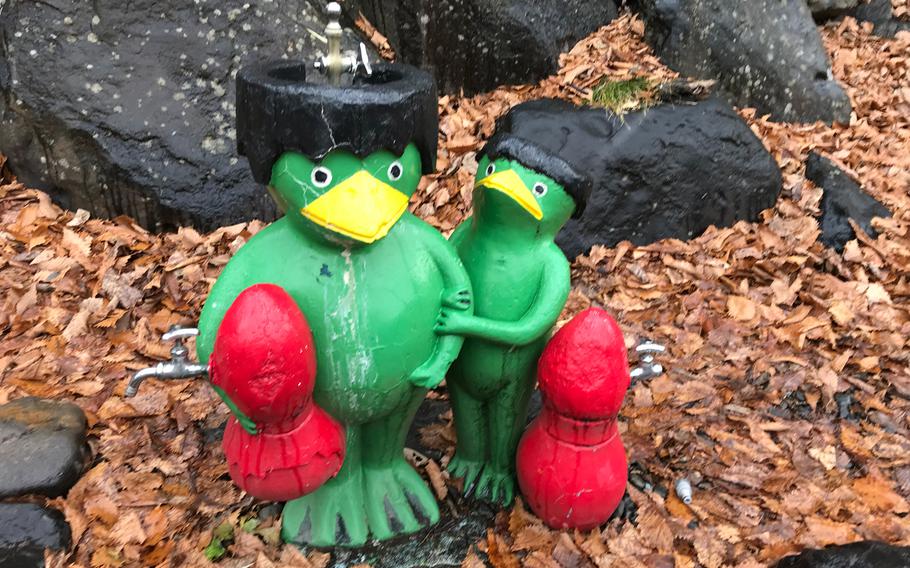 Jozankei Onsen is rumored to be the home of kappa, the mythical Japanese water demons thought to live in rivers and streams. (Seth Robson/Stars and Stripes) 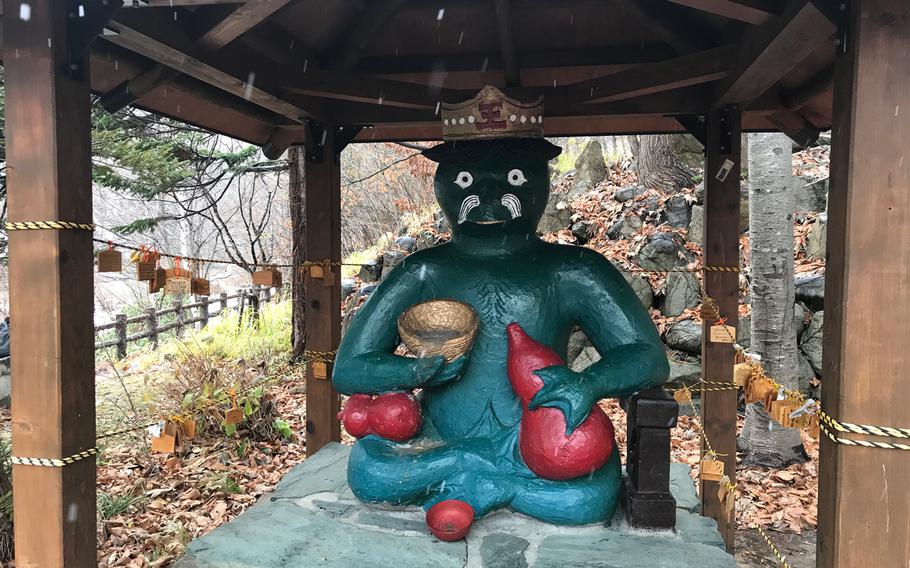 Folklore holds that kappa love to eat cucumbers and engage in sumo wrestling. They've also been accused of looking up ladies' kimonos and assaulting swimmers. (Seth Robson/Stars and Stripes) 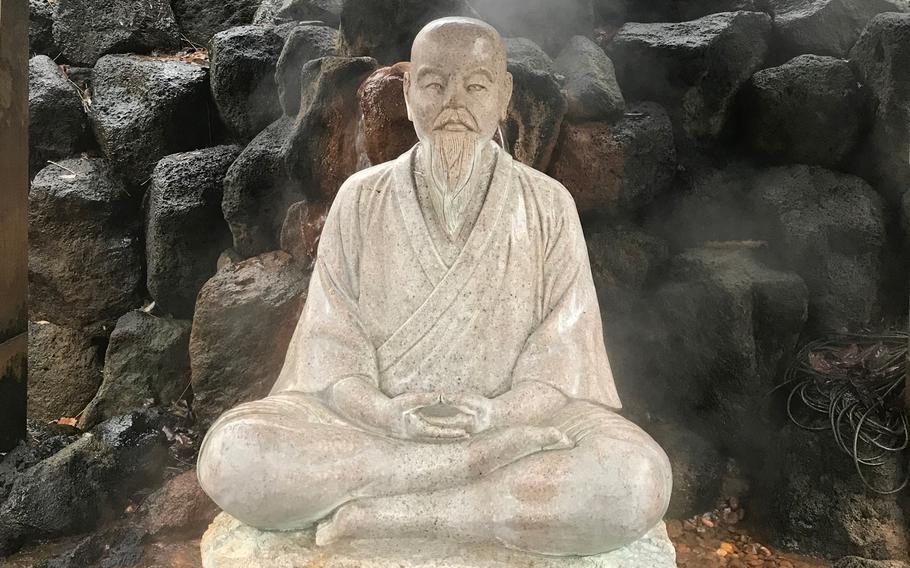 A statue of Miizumi Jozan, an ascetic monk who discovered the Jozankei Onsen more than 200 years ago, is a popular attraction in the area. (Seth Robson/Stars and Stripes)

A great place to relax after a hard day of skiing or marveling at snow sculptures is only an hour’s drive or bus ride from downtown Sapporo.

Jozankei is one of Hokkaido’s most popular hot springs drawing 1.6 million visitors each year, including 180,000 foreigners — twice as many as came a decade ago.

According to the Jozankei Onsen website, there are at least 56 hot springs in the area, and many more places where hot water gushes out of rocks or into the Toyohira River.

There are also many walking trails in the region. One popular route leads down a road that’s free of snow and ice, even in winter. How? In 1973, Jozankei became the first town in Japan to use heat generated by hot springs to de-ice the street.

Visitors can explore Jozankei Onsen by wandering along the bank of the river to the Futami Suspension Bridge, which is commonly depicted on posters promoting tourism in Hokkaido. In winter, the bright red bridge stand out against the white snow and ice blanketing the river, mountains and trees.

The influx of visitors to the Jozankei Onsen region has spurred construction of some impressive new ryokan, or hotel resorts — but you can see some of the abandoned older facilities on the walk up to the Futami Suspension Bridge. The decaying Showa-era buildings lend the area a spooky ambiance.

You’ll also see a few statues and some artwork depicting kappa, the mythical Japanese water demons thought to live in the river. Folklore holds that the kappa love to eat cucumbers and engage in sumo wrestling. They’ve also been accused of looking up ladies’ kimonos and assaulting swimmers.

There is, however, an easy way to defeat a kappa. Just bow and the polite creature will bow back, spilling the water from the bowl on its head, which causes it to become immobilized until it’s refilled.

Hikers with sore feet can soak them in a “foot onsen” at Jozankei Gensen Park, which was built to celebrate the 200th anniversary of the birth of Miizumi Jozan, an ascetic monk who discovered the hot springs.

Whether you’re looking for a bit of nature during your Sapporo vacation, or simply want to unwind in the comforts of an upscale hotel, Jozankei Onsen is a must-visit destination on any tour of Hokkaido.

JOZANKEI ONSENDIRECTIONS: Several buses run between Sapporo and New Chitose airport to the Jozankei Onsen region. Adult fares are 1,650 yen (or about $16), and child fares are 830 yen each way.TIMES: Varies according to onsen.COSTS: Most onsen charge admission fees. These vary depending on which onsen you visit. Yunohana Jozankeiden onsen, one of the most popular in the area, charges 850 yen for adults and 400 yen for children.FOOD: The area has about 20 restaurants that mostly serve Japanese food, although Western items are available.INFORMATION:jozankei.jp/en