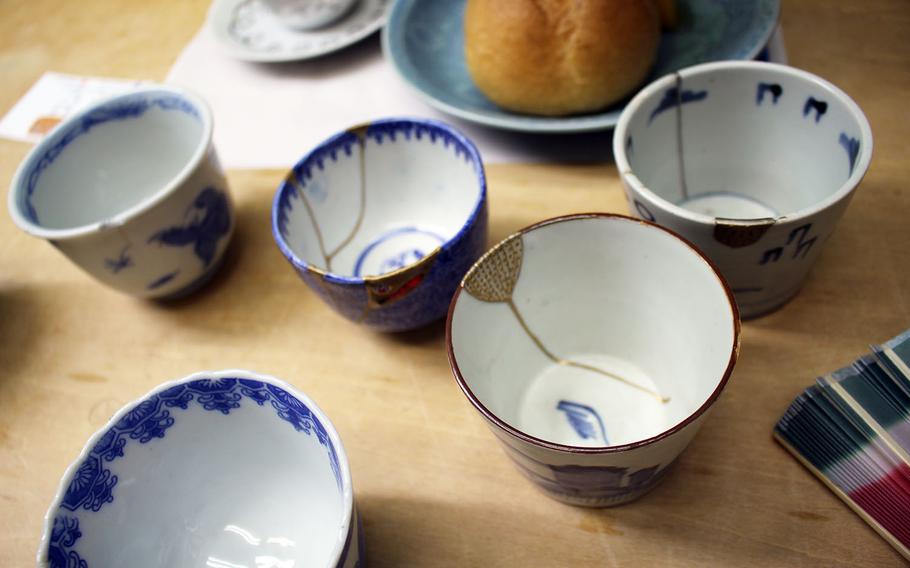 In the Japanese art of kintsugi, chipped ceramics are repaired with epoxy and clay and painted with gold dust. (Denisse Rauda/Stars and Stripes)

In the Japanese art of kintsugi, chipped ceramics are repaired with epoxy and clay and painted with gold dust. (Denisse Rauda/Stars and Stripes) 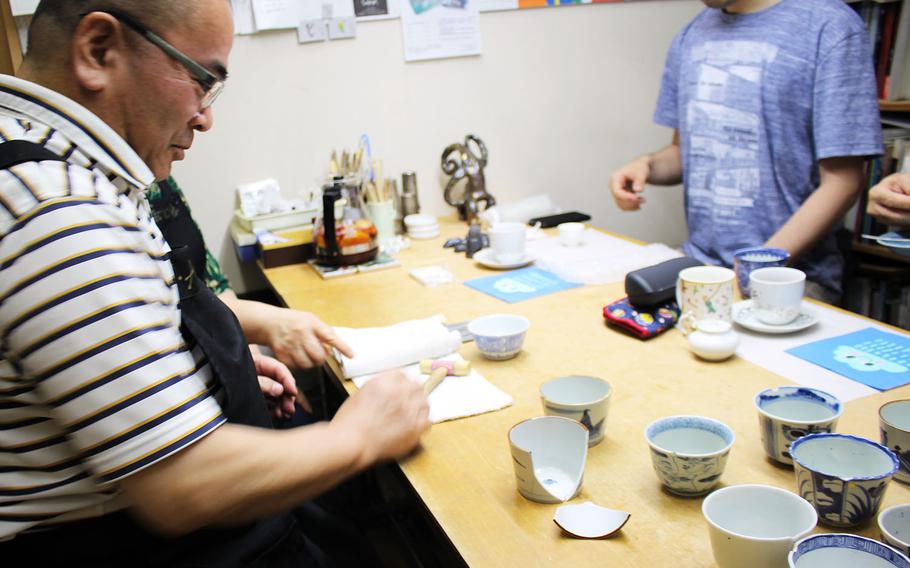 Yoshiichiro Kuge, left, helps students with mending teacups at the kintsugi class in Tokyo. Kuge works alongside his wife, Yoshiko, at the ceramics studio they own. (Denisse Rauda/Stars and Stripes) 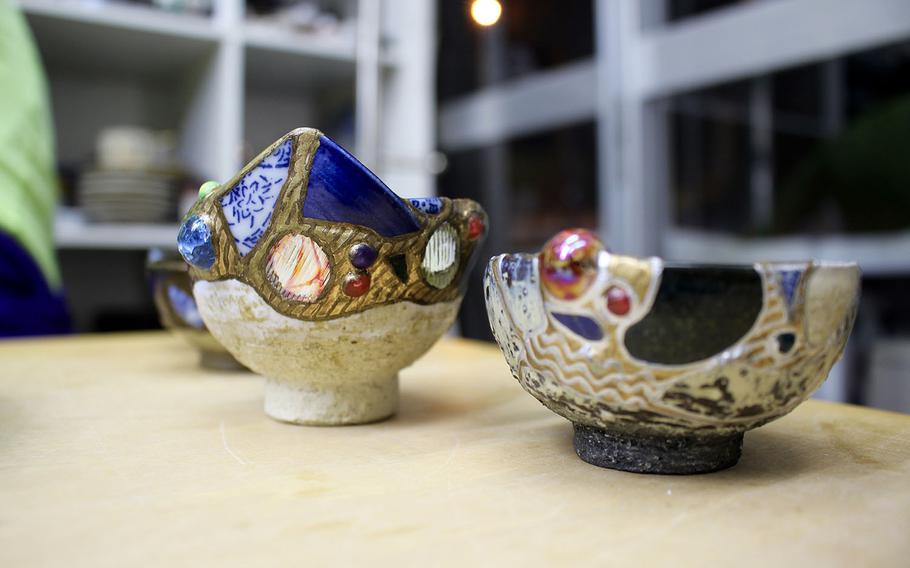 More intricate designs of kintsugi, like the ones shown here at Kuge Crafts in Tokyo, incorporate glass beads and gemstone embellishments to create a mosaic effect to the repair of the item. (Denisse Rauda/Stars and Stripes) 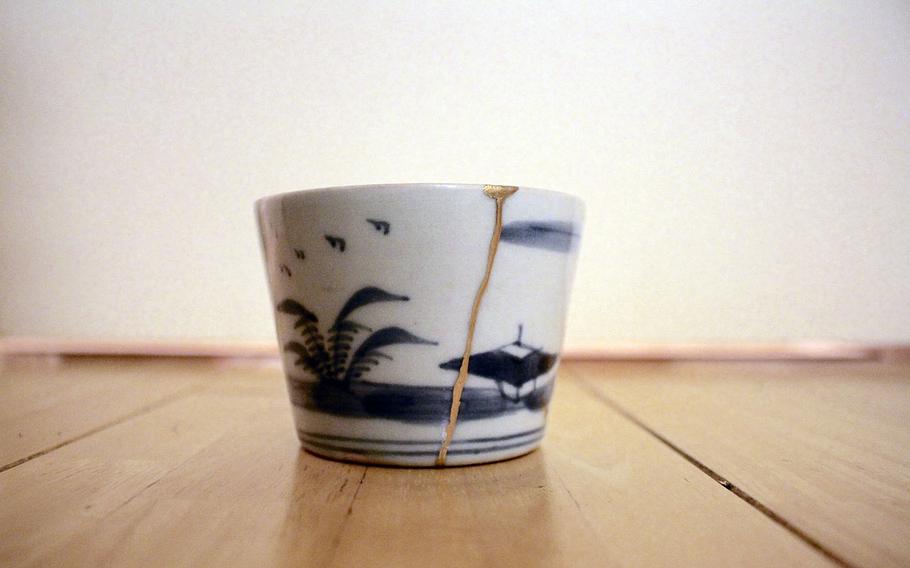 After repairing the teacup and adding the gold lacquer paint, it will be ready to use in two weeks. There are many steps to kintsugi, so be prepared to stick around at least two hours or more if you bring your own broken pottery to the class at Kuge Crafts in Tokyo. (Denisse Rauda/Stars and Stripes) 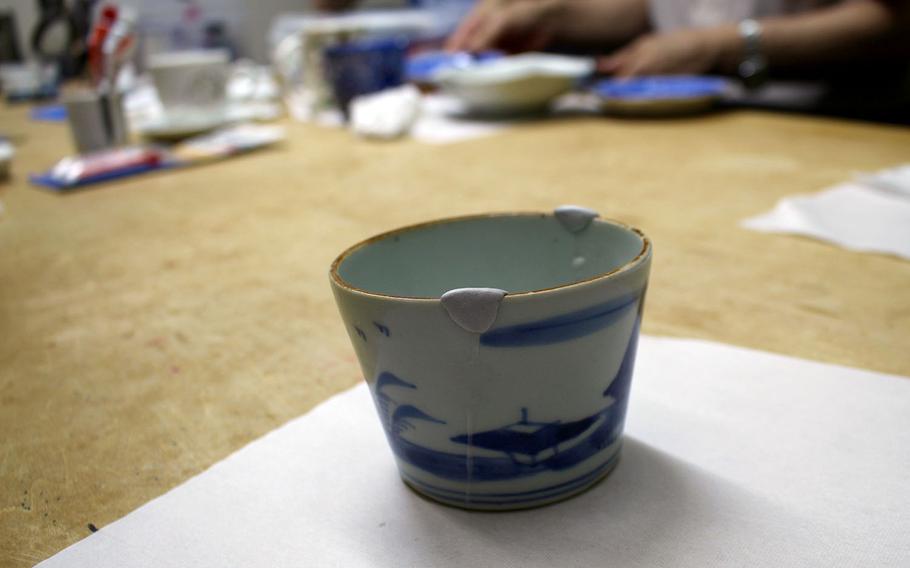 At the kintsugi class at Kuge Crafts, students reattach broken pottery pieces and use clay to fill gaps in the ceramic. In this photo, the teacup is still in the process of being primed for the final step of having the repairs painted in gold lacquer. (Denisse Rauda/Stars and Stripes)

In a society where flaws are often considered a negative, it is a rarity to see them celebrated — or even accentuated. When something breaks or becomes worn out, we either choose to pay to have the item fixed or deem it a lost cause destined for the rubbish bin.

But in the case of the Japanese art of kintsugi, when ceramic items break or get old, the flaws and cracks are treated as a badge of honor.

Dating back to 15th-century Japan, kintsugi involves repairing broken ceramic plates, cups, figurines and vases. Instead of concealing the cracks as one would in a traditional restoration, gold or silver lacquer paint is applied during the repair process to bring out those flaws. The word “kintsugi” literally translates to “golden joinery.”

More intricate designs also incorporate glass beads and gemstone embellishments to create a type of mosaic effect to the alteration. Kintsugi not only gives the piece more years of use, but, quite literally, gives it a new life with the help of a shiny makeover.

The practice is often associated with the Japanese concept of wabi-sabi, which focuses on the beauty of imperfections, flaws and — in this case — cracked pottery.

My friend and I decided to try our hand at kintsugi with an afternoon weekday class at Kuge Crafts, a tiny storefront located in Tokyo’s Suginami Ward. The shop is located several minutes south of Koenji, a trendy neighborhood known for its high concentration of vintage clothing shops and connection to Tokyo’s punk rock scene.

The owners of Kuge Crafts, husband-and-wife team Yoshiichiro and Yoshiko Kuge, greeted us with apple tea and various desserts in their home’s front parlor, which has been converted into a classroom and storefront. The couple boasts a combined 85 years of experience in ceramics and teach many pottery-related classes out of their studio, located next door.

Kintsugi lessons are held every Wednesday, Thursday and Saturday for a few students at a time. Students are encouraged to bring their own broken pottery to work on — but if you don’t have any, the class fee includes one piece of pre-broken pottery from the studio.

I chose a teacup from the Kuges’ own collection with beautiful blue seascape and a few chips. Yoshiichiro indulged my request to intentionally damage the teacup a little more so I could add more gold detail later.

Using epoxy, Yoshiichiro soon walked us through the first step in the kintsugi process and only interrupted to check our work thereafter. Yoshiko assisted with instructions and explanations in English, so there was never any confusion as to what we were doing.

Once the cup was glued back together, we then sanded the repaired sections and patched the cracks on the edge of the cup with clay. After a little more sanding, we were handed a special paint brush and gold lacquer to paint in the newly-repaired cracks and sign our “new” creation.

After painting on the lacquer, we brushed on gold dust and let the paint dry for 15 minutes. While we waited, Yoshiko gave us a tour of the pottery studio.

Yoshiichiro then carefully packed my beautifully-flawed teacup, and it was ready to go home. Unfortunately, the cup won’t be ready to use for about two weeks, as additional time is required for the repair materials to properly set.

There are many steps to this art form — so be prepared to stick around at least two hours, or more if you bring your own broken pottery.

Kintsugi students are also given a handy materials list in Japanese to make shopping for the tools to hone the newly acquired skill a bit easier.

Taking time to make some art in a small class setting with knowledgeable and friendly owners made the trek away from the humdrum of Koenji’s shopping areas worthwhile. Be forewarned: Weekend courses are the most difficult to book, so try a weekday evening one instead.

After the class, I remembered I do, in fact, still have a broken teacup and saucer — a PCS move casualty — at home. I plan to upgrade the bad glue job I initially gave it and instead celebrate its flaws with some shiny gold paint. And maybe, just maybe, through my continued kintsugi practice, I will also eventually learn to apply the deeper meaning of celebrating the beauty in life’s flaws.

FOOD: There are many restaurants and convenience stores located in the neighborhood, and near both Koenji Station and Shin-Koenji Station.