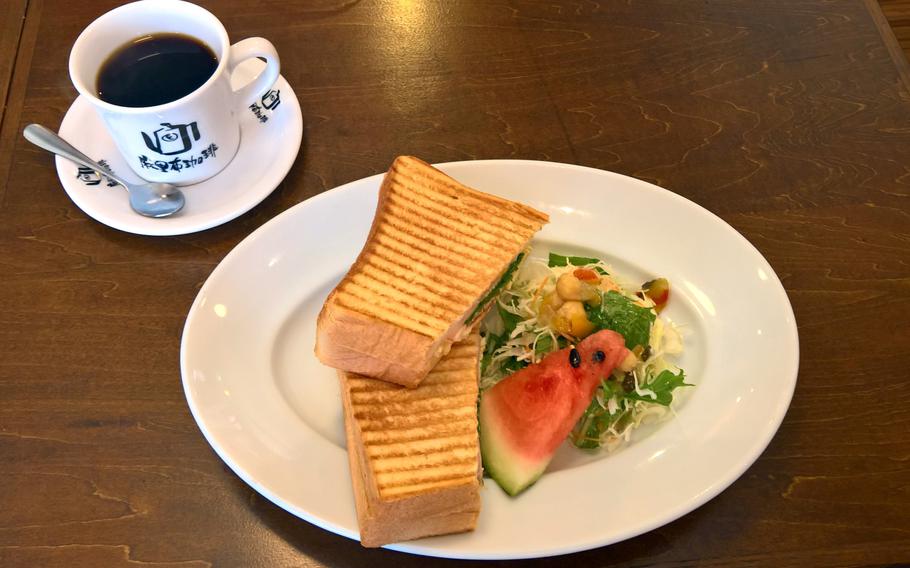 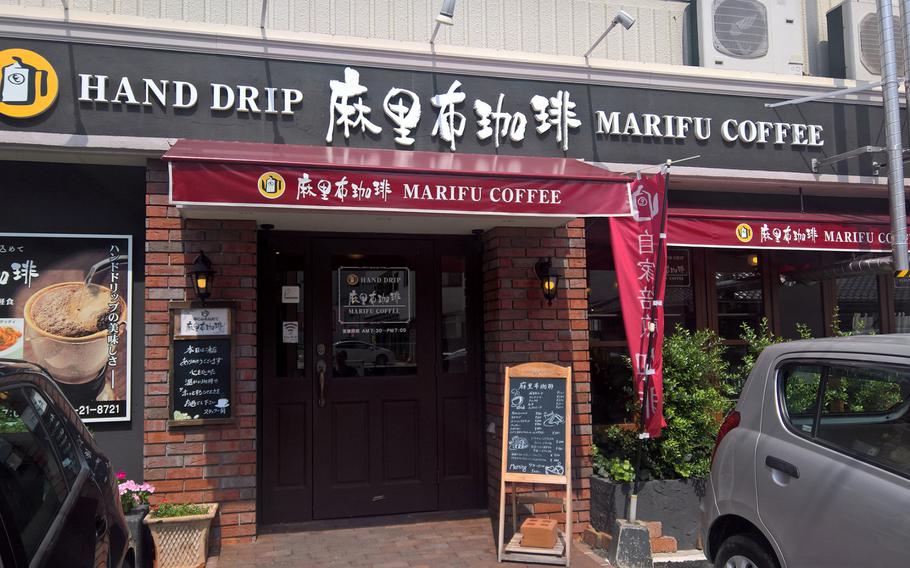 Buy Photo
Marifu Coffee is a small cafe just a 10-minute walk from Iwakuni Station and a quick drive from ICAS Iwakuni. (James Bolinger/Stars and Stripes) 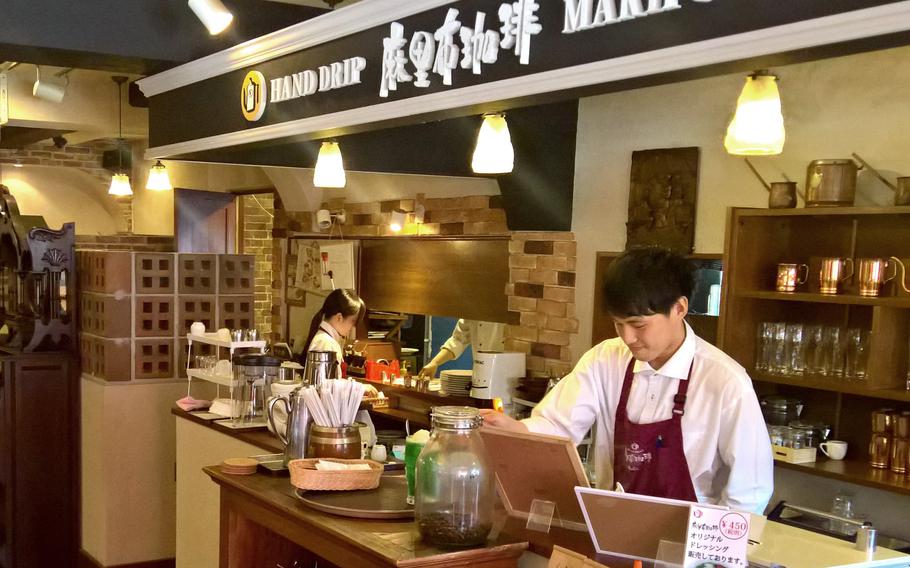 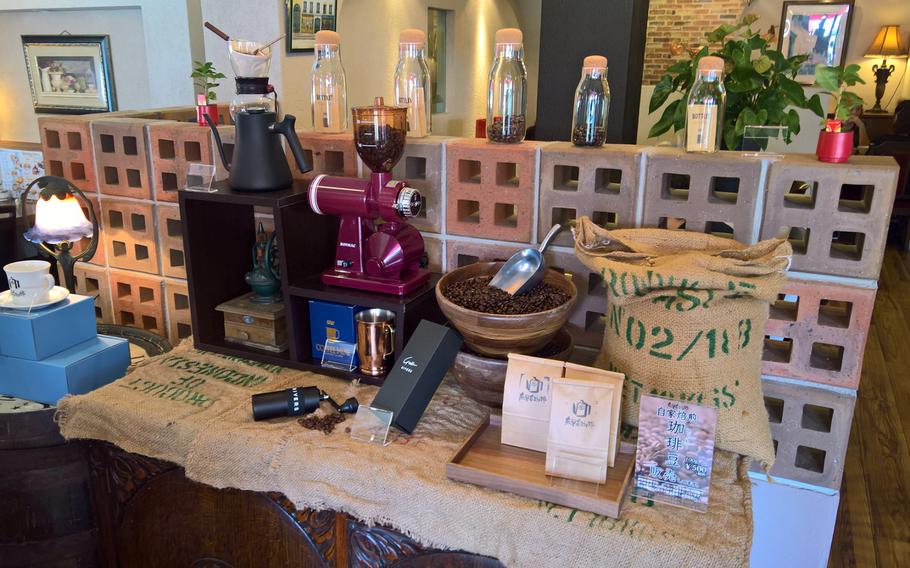 Buy Photo
Marifu is completely different from most standard coffeehouses, as all the beans are roasted in-house and the cafe's baristas brew only a few cups of coffee at a time utilizing the pour-over method. (James Bolinger/Stars and Stripes) 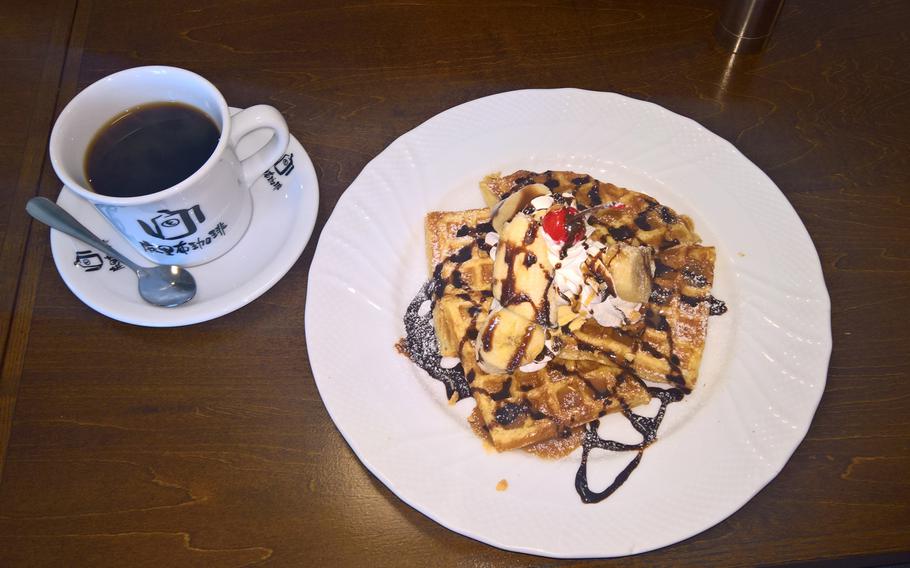 Buy Photo
The waffles at Marifu are a definite standout -- crispy and golden on the outside with a warm fluffy interior. (James Bolinger/Stars and Stripes)

At many of Japan’s popular chain coffee shops, such as Starbucks or Doutor, massive amounts of coffee are brewed in a carafe and served to patrons hours later. While the method is efficient and delivers a brew that’s fine for a quick coffee fix, independent cafe owners across the country have shunned this practice in favor of a more artisanal coffee experience where cups are carefully brewed one at a time. In fact, cities like Kyoto, which has an abundance of these small, hip cafes, are now must-visit destinations for coffee connoisseurs.

Luckily, those living near Iwakuni won’t have to travel far for a handcrafted coffee experience, thanks to Marifu Coffee, a small cafe just a 10-minute walk from JR Iwakuni Station.

I first discovered Marifu Coffee completely by accident when I was still new to Iwakuni and unfamiliar with the area. While searching for a camera shop, I found myself distracted by the intoxicating smell of fresh coffee emanating from a building and decided to stop and enjoy a cup. After that first visit, I was hooked, and now Marifu is my go-to spot for brunch in Iwakuni.

Upon entering Marifu, guests are greeted by the pleasant smell of freshly brewed coffee and a smiling barista. Bar seating along the windows is perfect for solo diners, while ample table seating is available for larger groups. An easy-to-understand English menu with pictures of each dish makes ordering a breeze.

Marifu is completely different from most standard coffeehouses, as all the beans are roasted in-house and the cafe’s baristas brew only a few cups of coffee at a time utilizing the pour-over method — a style of coffee brewing that’s extremely popular with coffee aficionados. Fresh grounds are placed inside a cloth filter set over a cup or carafe while hot water is poured slowly over the grounds. This hand-brewed technique gives the coffee a bold flavor that never tastes burned.

Marifu is also unique in that the cafe features an extensive menu of food items perfect for breakfast and lunch, ranging from waffles to sandwiches.

The waffles at Marifu are a definite standout — crispy and golden on the outside with a warm, fluffy interior. The chocolate banana waffles (680 yen) are a work of art, topped with vanilla ice cream, a sliced banana, whipped cream, a cherry and a drizzle of chocolate syrup and caramel.

The waffles are delivered to your table before the ice cream has time to melt and pair perfectly with a cup of Marifu’s signature coffee. While one waffle might not be enough food for those with a bigger appetite, it is delicious — and definitely something kids would like. Plain waffles are also available (550 yen) and can be paired with a cup of coffee as a part of a set meal for 650 yen.

For those without a sweet tooth, Marifu’s more savory treats offer plenty to enjoy. The panini sandwich (680 yen) is filled with egg salad, ham, lettuce and tomato. The sandwich’s toasted bread is perfectly thick and has just the right amount of chew, while the egg salad complements the other fillings nicely. The sandwich is also accompanied by a side salad and a slice of watermelon, which completes the meal.

If you visit often, be sure to pick up Marifu’s point card. Ten stamps will get you a free coffee.

House-roasted coffee, pristine golden waffles and a friendly staff make Marifu Coffee a must-visit for breakfast, brunch — or simply any time you crave a cup of perfectly brewed coffee.

Directions: Marifu Coffee is accessible at Iwakuni Station via the JR Gantoku Line and JR Sanyo Lines (10-minute walk). From MCAS Iwakuni, turn right on Route 188. Stay on Route 188 for roughly 2.2 km before turning left at the Mikasabashi Intersection, located near Iwakuni Station. Turn right at the third stoplight and continue for about two blocks. Marifu Coffee is located just past the 7-Eleven convenience store.