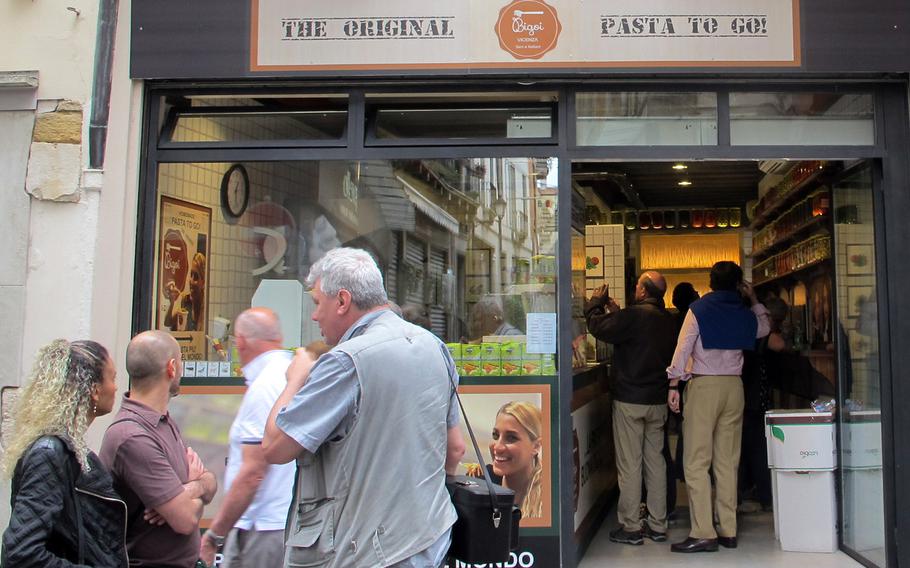 Bigoi in downtown Vicenza, Italy, sells its eponymous fat spaghetti, made on site, with a choice of sauces served to go in a paper cup. (Nancy Montgomery/Stars and Stripes)

Bigoi in downtown Vicenza, Italy, sells its eponymous fat spaghetti, made on site, with a choice of sauces served to go in a paper cup. (Nancy Montgomery/Stars and Stripes) Bigoi in downtown Vicenza, Italy, makes its pasta from wheat, eggs and salt on site. The pasta, like fat spaghetti, is known for its roughness, which helps sauces adhere. (Nancy Montgomery/Stars and Stripes) 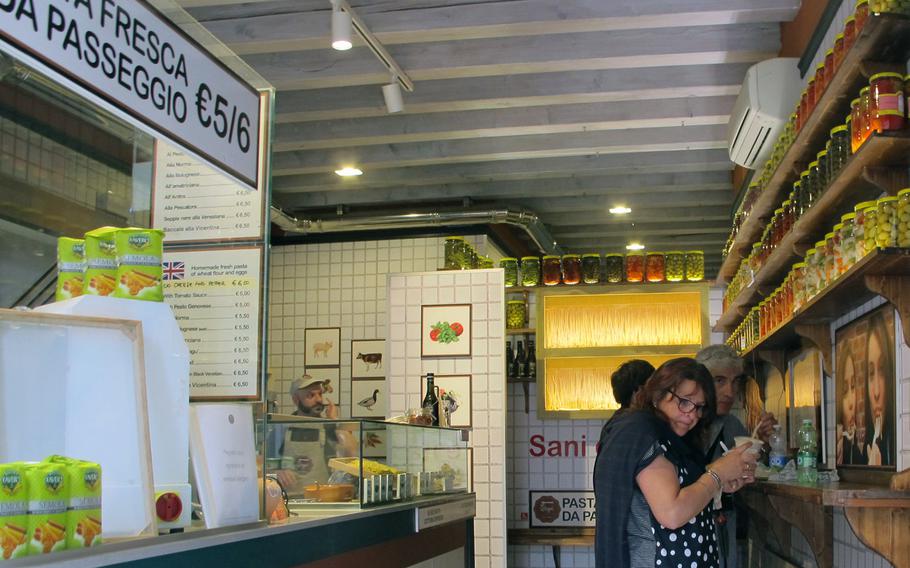 Pasta at Bigoi in downtown Vicenza, Italy, is meant to be taken away. But there is a small counter for standing and eating. (Nancy Montgomery/Stars and Stripes) Bigoi in Vicenza, Italy, offers a choice of 10 sauces for its pasta, priced between 5 and 6.50 euros. (Nancy Montgomery/Stars and Stripes) Bigoi's bigoli pasta with seafood sauce is as good as or better than that served in sit-down restaurants. (Nancy Montgomery/Stars and Stripes)

I’ve yet to find pizza by the slice in northern Italy. But tell me where in New York or Chicago you can find pasta by the cup?

Bigoi, an Italian franchise with shops in Vicenza, Verona, Venice and Padua, has been selling takeout pasta for the past couple of years. I’d seen people sitting on the stone steps of Vicenza’s majestic Basilica Palladiana plastic-forking bigoli pasta to their mouths from a paper cup. They’d seemed content, but I’d wondered: How good could it be?

Really good, it turned out.

Named for the Venetian dialect for bigoli, the fat, rough-surfaced egg pasta made fresh on site, Bigoi offers a quick, delicious lunch or dinner entree for less than 7 euros (about $8.40).

I recently bought a cup with a tomato-based seafood sauce — clams and spices were visible — for 6.50 euros. I also bought a serving of meat sauce for 2 euros to try later. Both sauces were tasty. The pasta was hot and perfectly al dente, even after the five-minute walk home. I even felt good about the cup and fork, both biocompostable, according to the company.

The sauces are frozen, not fresh, but they taste as good as those in more expensive sit-down restaurants. And there are 10 to choose from, including plain or spicy tomato, pesto, duck, cuttlefish and cheese and pepper.

The storefront shop is modest and not meant for hanging out, although there is a small counter at which some diners stand and eat. There are no salads or other sides, only pasta and sauce. Drinks are likewise limited to the essentials: bottled Italian beer and water. As an added bonus, the Bigoi staff speak English.