‘It sounds like a Volkswagen Beetle flying over your head’ 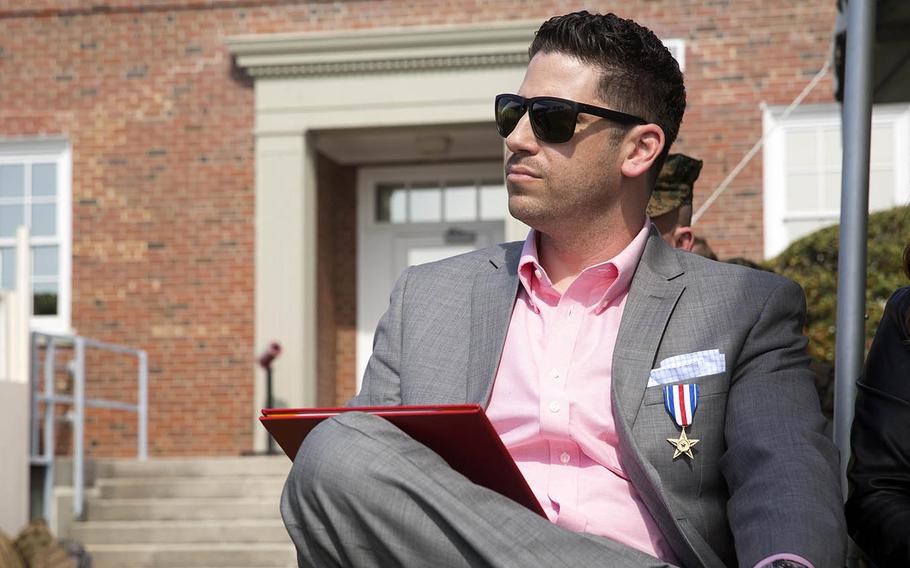 Retired Sgt. Matthew Parker wears a Silver Star presented to him at Marine Corps Base Camp Lejeune, N.C., on March 18, 2016. Parker was recognized in May 2011, when he assumed control of his platoon during a firefight in Helmand province, Afghanistan, after several leaders had been injured. (Kirstin Merrimarahajara/Courtesy)

Retired Sgt. Matthew Parker wears a Silver Star presented to him at Marine Corps Base Camp Lejeune, N.C., on March 18, 2016. Parker was recognized in May 2011, when he assumed control of his platoon during a firefight in Helmand province, Afghanistan, after several leaders had been injured. (Kirstin Merrimarahajara/Courtesy) 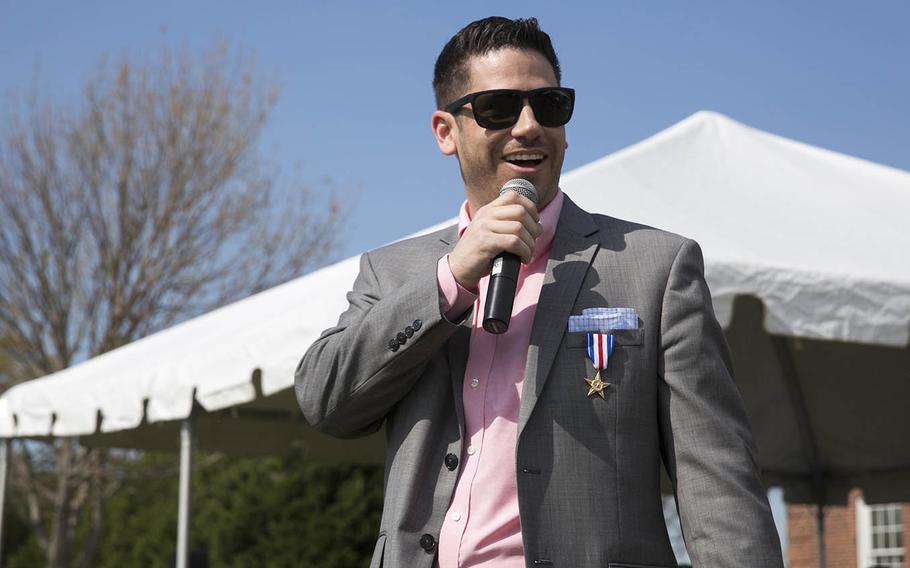 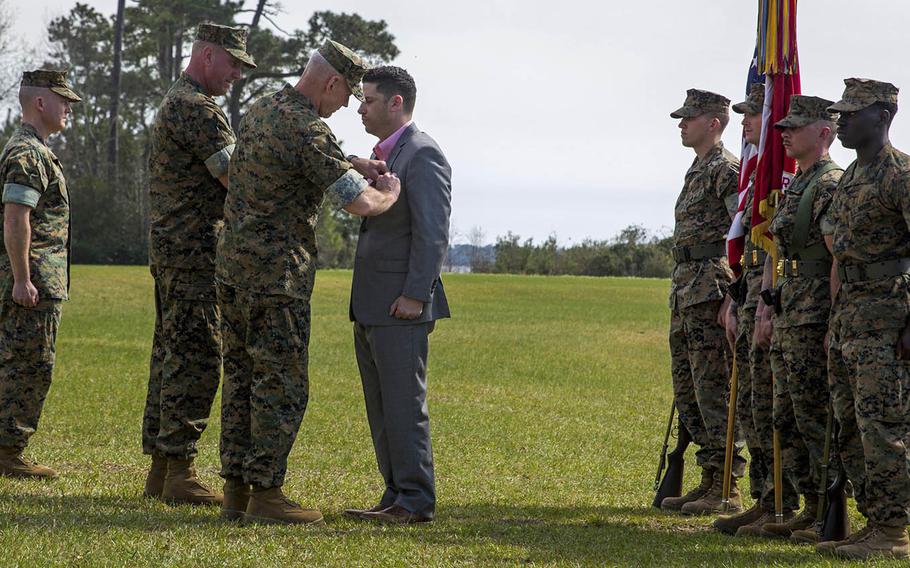 Matthew Parker, a retired Marine Corps infantry sergeant, receives the Silver Star in March 2016 at Camp Lejeune, N.C., for his actions in Afghanistan's Helmand province in 2011. (Courtesy of Kirstin Merrimarahajara)

May 21, 2011 Helmand province, Afghanistan Former Sgt. Matthew Parker stood at the head of a formation on a Camp Lejeune field in March 2016, sporting a gray business suit and a bit more hair than he ever had on active duty.

How did he feel as 2nd Marine Division commander Maj. Gen. Brian Beaudreault pinned on his Silver Star?

Hundreds of people, standing in formation for just one guy? For me?

He looked over at the junior Marines and thought of the raw lance corporals he led on May 21, 2011, in Afghanistan, on a day when nearly everything went wrong.

“I just want you to know I appreciate you,” Parker told the men in formation.

Parker spoke like a bunch of other Marines had earned the nation’s third-highest combat award and he just happened to be wearing it.

“That tells you all you need to know about Matt’s character as a whole,” said Joshua Wartchow, Parker’s platoon sergeant during their deployment with the 3rd Battalion, 2nd Marine Regiment in 2011. “Yes, I think Matt is a special, exceptional person, but not just because of that day. Those are the actions he took time and time again. That’s his professionalism.”

Parker grew up in a military family, moving every few years, saying goodbye often to his frequently deployed Navy father. He never planned to join, until 9/11 drew him to a Marine recruiter.

Parker first deployed to Fallujah in 2004, shortly after the April fight but in time for the second battle, generally considered the bloodiest of the war in Iraq.

“It might sound cliche, but it changed my life, my outlook on life,” Parker said. “I’d like to say that’s when I grew up.”

He returned to the United States and suffered a training injury requiring a year of surgery and physical therapy, then went back to Iraq for the 2007 surge.

In February 2011, Parker deployed with 3/2 as a squad leader to a small patrol base in Afghanistan’s Helmand province, a part of the Taliban’s heartland.

The frigid temperatures left the area pleasantly quiet for the first couple of months. As springtime came, so did the fighting.

Sgt. Manuel Silva’s squad was getting ready to return from a patrol a couple of miles away when reports came in of about a dozen enemy combatants carrying a recoilless rifle and other weapons.

Marines at the patrol base suspected they had been shot at previously by the rifle, a lightweight, high-caliber artillery weapon.

Silva’s squad remained on a northern hillside to search for the enemy fire teams. Parker’s quick reaction force squad was ordered to head west over a muddy river, called a wadi, into a small village, where the squad would link up with Silva’s squad.

Parker’s lieutenant added himself to the roster, meaning Wartchow would man the radio and act as a bridge between the squads on the ground and higher headquarters.

The fight begins Helicopters provided air cover, but that didn’t dissuade enemy fighters from taking potshots at Parker’s squad as they entered the village.

Parker’s squad came around a corner and spotted two men 50 feet away; one was armed with a PK machine gun, while the other held an AK-47.

The squad’s point man shot the machine gunner in the head and probably nicked the other fighter, who ran away. The lieutenant ordered the squad’s medical corpsman to render aid to the fallen enemy.

As the corpsman attended to a man everyone suspected was a goner, the squad remained exposed near the riverbanks.

The helicopters providing support radioed that they were leaving to refuel.

“When they left is when it really kicked off,” Parker said. “The [enemy] just started their attack from both sides of the wadi … we didn’t know quite how many at the time we were facing.”

As rockets came their way, the corpsman pronounced the Taliban fighter dead and Parker led the group into a sheltered compound.

After an hour of exchanging fire, a Marine sniper element east of the river radioed enemy positions to Parker’s squad. The Taliban fighter remained out of small arms range, but a marksman or a machine gunner might have a chance.

They took their shots. About 800 meters away, Parker and others watched as a Taliban fighter hopped around after taking a Marine bullet in the rear end.

“That kind of took some of the stress out of the situation,” Parker said.

Everything goes south Back at the patrol base, Wartchow assessed the situation and got his commanding officer on the phone. Troops in contact, he reported.

“At that time, if you declare a TIC, you’re getting every asset available to you,” Wartchow said.

Battalion sent a unit with anti-tank missiles and mounted assault weapons, but the vehicles got stuck in the muddy wadi, too far to the south to provide support.

After that came the casualties.

Lance Cpl. Gregg Merrell, Parker’s assistant platoon leader, took a bullet through the tricep. Parker offered to put him on an evacuation helicopter. Merrell replied with a few colorful expletives that he wasn’t going anywhere.

A powerful blast came from a hillside tree line, knocking the squad’s lieutenant unconscious with a concussion. The squad had found the recoilless rifle.

“It sounds like a Volkswagen Beetle flying over your head,” Parker said.

Parker, now in command, pulled all Marines off the riverbank and assembled a casualty collection point. He radioed for Silva, whose squad remained above them on a hill. Parker and Merrell ran up the hill to meet Silva, who took one look at Parker and passed out.

Rocket-propelled grenade shrapnel had ripped through Silva’s legs. They carried him back to their position, where a corpsman worked on Silva. Merrell took over Parker’s squad, while Parker took command of about 30 Marines engaged in the fight.

Parker wondered whether anything else could go wrong when the sniper team radioed that 20 enemy fighters were approaching them from the west as they continued taking fire from the east.

The helicopters came back and strafed a compound, taking out some of the RPG fire, then headed back to refuel.

By now about five hours had passed. Parker’s quick reaction force, equipped for an hour or two outside the wire, had long ago run out of water. Marines began passing out from dehydration.

Parker persuaded the compound’s resident to bring him water from his well while Marines began divvying up their dwindling ammunition supplies.

“For the most part, this was their first deployment and their first taste of combat,” Parker said. “I was blown away by how they had kept their composure. It was almost surreal.

“I don’t know if I’d ever been in a firefight where everyone was where they were supposed to be and you didn’t have to tell anybody what to do. Maybe it was just the day that everyone decided they wanted to be a perfect Marine.”

Return and recovery Eventually, a squad linked up to the south to provide supplies. Parker called in an airstrike, which flattened a Taliban stronghold with a 500-pound bomb. The fighting continued until sunset.

Under night cover, Parker pulled his Marines across the wadi through chest-deep water.

An hour later, they returned to their base. Silva and the other casualties made it out alive.

If this were a movie, it might have ended with a welcome home parade and rolling credits. But Parker’s unit fought through a rough summer.

By the end of the deployment, Parker was tired and his body was breaking down. At 25, before his Afghanistan deployment, he had been diagnosed with arthritis. Last year, Parker medically retired from the Marine Corps.

On Feb. 28, Wartchow medically retired as a staff sergeant.

“Every guy I know that was in for as long as I was and were squad leaders or in any type of infantry leadership — it takes a toll on you,” Parker said.

Both men live in North Carolina and stay in touch, as do several of the Marines who served with them. The group talks about their lives and families, but they talk about the war too.

“We’ve definitely seen a great generational shift since we came in, where you don’t talk about stuff, to where the Marine Corps and my guys made a push for it,” Wartchow said. “You can talk to a doctor all day, but the best therapy is your brother.”