‘It is about all the guys that fought in Vietnam’ 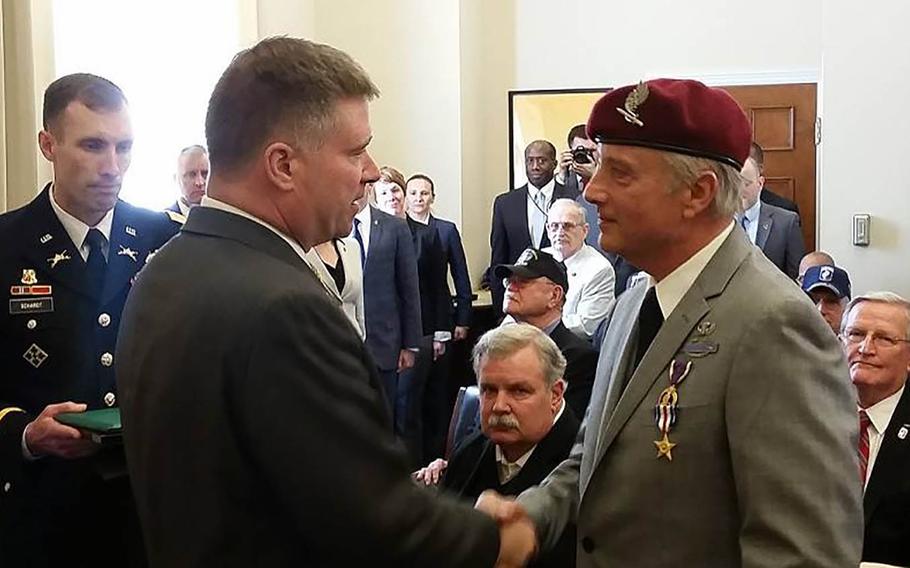 June 17, 1968 Bao Loc, Vietnam Army Spc. Stanley DeRuggiero Jr. rubbed blood on his face and rolled over to play dead behind a 2-foot high termite hill that was his only cover.

The New York native had just blasted through 28 magazines of ammunition in a desperate, lonely stand to protect three downed comrades from charging Viet Cong fighters.

After several hours of intense fighting, there was a lull. DeRuggiero saw a Viet Cong fighter creep toward him, crawling on his belly about 20 feet away. He took aim behind the termite hill, but his M-16 jammed. The click of the failing gun — again, again and again — gave up his position.

With his hunting knife in one hand, DeRuggiero used his other to wipe blood on his face from a bullet hole in his leg. He rolled over, playing possum, and waited for the enemy to get close enough to kill.

“The termites were chewing up my arms, but that was secondary,” he said. “Then I felt something hot.”

Next to him was a comrade’s M-16, partially covered from an earlier explosion and still hot from being fired. “I pulled it out of the ground, real quick, and blew the guy away,” DeRuggiero said.

For nearly 50 years, he lived with a “quiet pride” that his solitary stand in the jungle of Bao Loc saved the life of one soldier — two others he fought to protect that day later died from their injuries. In April, the Army formally recognized DeRuggiero’s gallantry with the Silver Star, the nation’s third-highest medal for valor. It was an effort many years in the making, starting 30 years ago when his old squad leader petitioned the Army. That was followed by two company commanders who made a final push for recognition.

Finally, at an April 14 ceremony in Washington, DeRuggiero, 68, was honored before a small crowd of vets, servicemembers and his local congressman, who pinned the medal.

“With total disregard for his own life for more than five hours, Specialist Four DeRuggiero positioned himself in front of three wounded, fought off several Viet Cong flanking attacks with hand grenades and well-aimed M-16 fire, provided care and assurance to the wounded and then shielded another Soldier who came out to help drag them to safety one by one,” read the Silver Star citation. “Specialist Four DeRuggiero maintained this guard position alone.”

For DeRuggiero, the recognition amounts to more than an individual honor. Rather, it is a reminder of how brutal and life-changing the Vietnam War experience was for so many.

“You have to accept it humbly,” he said. “It isn’t just about me. It is about all the guys that fought in Vietnam. Imagine how many guys weren’t recognized and will never be recognized.”

With his Silver Star comes a flood of memories about a gruesome year in combat where death was all around. The only thing that got him through was that rare camaraderie that develops among fighting men, he said.

Raised in Yonkers, N.Y., DeRuggiero was drafted into the Army and was in Vietnam by early 1967, where he joined up with the 173rd Airborne Brigade. The 20-year-old spent 10½ months in the jungle, much of it near the Cambodian border, engaged in some of the fiercest fighting of the war.

In November of that year, he took part in one of the bloodiest fights of Vietnam — the Battle of Hill 875 as part of the Battle of Dak To, which killed more than 300 soldiers. For DeRuggiero it was five days of fighting during which the thick jungle foliage had been charred to a crisp. Bodies were blown into the branches above.

“You could literally see rib cages hanging from trees,” he said. “The carnage was beyond words. That was one of the most horrendous experiences, and if you came out of it you were very lucky.”

DeRuggiero’s jungle odyssey was freakish in violence, where there was more to be feared than just the Viet Cong. Once, a tiger snuck into camp at night, sniffing out water during a dry season.

“The tiger was biting into a canteen, which woke a guy up and he started screaming. The tiger attacked the guy and shook him by the head before running off,” he said.

The jungle was so dense the soldiers had to climb trees to chop away branches, clearing a path for a stretcher to be lowered for the injured man to be lifted out by chopper. DeRuggiero doesn’t know whatever happened to the soldier, if he lived or died.

On another patrol, a soldier was bitten on the arm by a bamboo viper, a small green snake that is one of the world’s most venomous. “If you got bit, the saying was, don’t worry just sit down and get ready to die. No one survived a bite by the bamboo viper.”

That soldier, however, got lucky. A medic ran over, and with a knife cut a rectangle around the wound and tore out the hunk of flesh before the venom could course.

“The guy fainted. He bled profusely. But he lived,” DeRuggiero said.

Then there was the jungle, an enemy in its own right.

As part of a select “search-and-destroy” unit, DeRuggiero’s team jumped into remote terrain for long stretches. Supplies of ammunition, C-rations and mail were air-dropped in every three weeks.

“I didn’t take a shower or a bath for five months. That was all of us, officers too,” he said. “The clothes would start falling apart. The jungle was relentless with thorns and vines. Depending on your immunities, you would get jungle rot. You’d see guys with skin just rotting.”

By June 1968, DeRuggiero was nearing the end of his time in Vietnam when his team got an order to move into the area near Bao Loc, which had come under recent attack. An American special operations camp had been overrun by the enemy. When his unit came upon the scene, they discovered two soldiers who had been captured alive. They were cut in half lengthwise. “We were really pissed off,” DeRuggiero said.

The mission was north of Saigon, near the Cambodian border. There were about 110 U.S. soldiers.

“We were told we were going up against a reinforced battalion,” he said. “That is about 1,500 troops. We weren’t happy with the odds. And they told us we had no support.”

When they met the enemy, the firepower was so heavy, “guys were just dropping.”

At one point, an M-16 bullet ricocheted and hit DeRuggiero in the calf. The enemy had seized American weapons from the overrun camp and were using them on the 173rd.

During the onslaught, the U.S. soldiers pulled back to take cover and form a perimeter. That’s when DeRuggiero heard a downed comrade’s voice calling for help. Rather than moving with the rest of the unit, he stayed back with the man and discovered two more injured, pulling them out of the line of fire.

He began administering first aid behind a termite hill, the only cover available. With machine-gun fire pouring in and grenades landing nearby, he shifted attention to the enemy.

“I started laying out fire,” he said. “I was spraying the area from left to right.”

After running out of bullets, he scrambled for the ammo of his injured comrades, juggling the fight with rendering first aid. In between the roar of gunfire and grenades, the pained voice of one of the injured soldier’s threatened to give away their position in the dark.

“He kept saying, ‘Don’t leave me,’ ” DeRuggiero recalled. “I said, ‘Don’t worry, we are going to live together or we are going to die together. I am not leaving you.’ He felt reassured after that.”

He then gave the soldier a shot of morphine and kept on fighting. After hours of battle, the Viet Cong soldier crawled to find DeRuggiero’s position. Shortly after he shot the soldier at close range, air support came in and helped finish off the enemy hidden in the jungle.

“Everything started quieting down after that,” he said.

When it was all done, he stayed to help hold the ground another day before being lifted out.

In a matter of months, he would be back home in New York. Adjusting to civilian life was hard, and in the years after Vietnam DeRuggiero struggled to find his way.

“I didn’t acclimate into society very well. I didn’t know how to act. I was so depressed,” he said. “I wanted to do the GI Bill, but I couldn’t go into the college environment. If someone called me a baby killer I would have torn out their windpipe.”

Eventually, DeRuggiero began to gain perspective on his war experience. He learned to be a carpenter and went on to a career spent building houses.

“It is something I’ve learned to live with over time,” he said. “If I had gone through hard times, finances, whatever, I try to reflect on those days and how grateful I am to be alive. There is no rhyme or reason to any of it, why some guys didn’t make it back and you did.”

The memories are as brutal as the war, but there is one thing DeRuggiero says he misses about Vietnam.

“The camaraderie you establish in those circumstances is beyond none,” he said. “I was never able to attain that cohesive atmosphere of everyone working together. It just never happened in civilian life.”