'It feels awkward sometimes being called a hero' 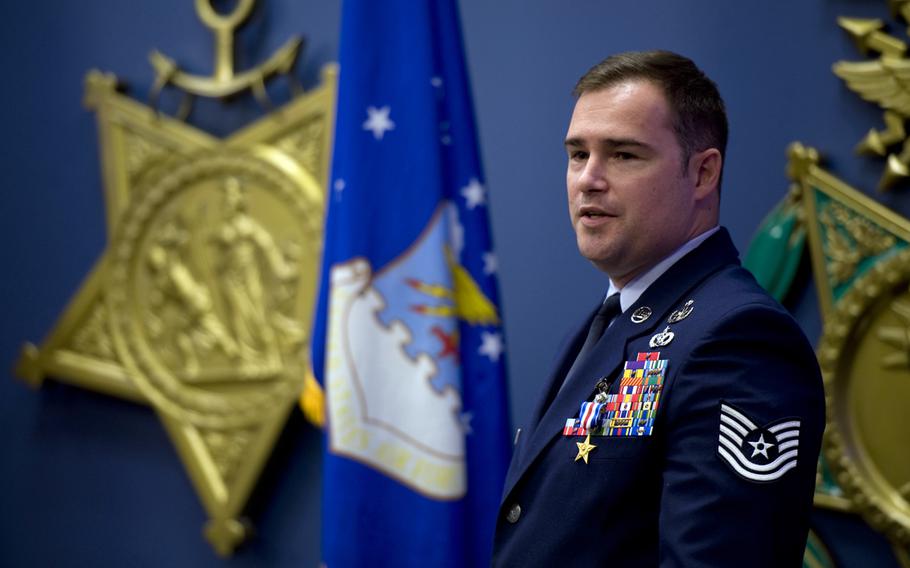 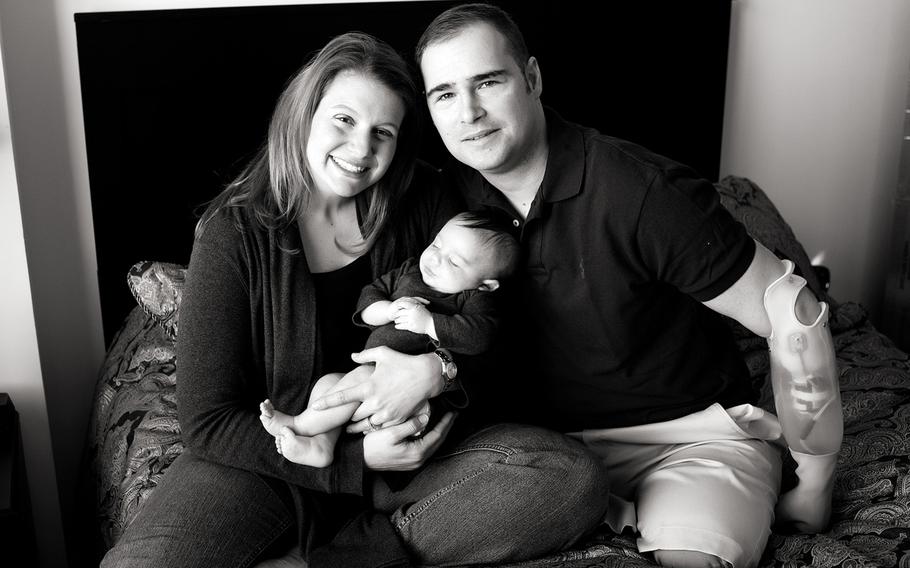 Air Force Tech Sgt. Joseph Deslauriers, right, was awarded the Silver Star at the Pentagon for his actions in Afghanistan. According to his award citation, Deslauriers dismounted from his armored vehicle in an IED infested area to render safe an improvised explosive device, clear the way to rescue 2 wounded Marines, and investigate several IED blasts before he stepped on an IED. Here, he poses for a photo with his wife Lisa and their son Cameron. (Courtesy of Deslauriers Family) 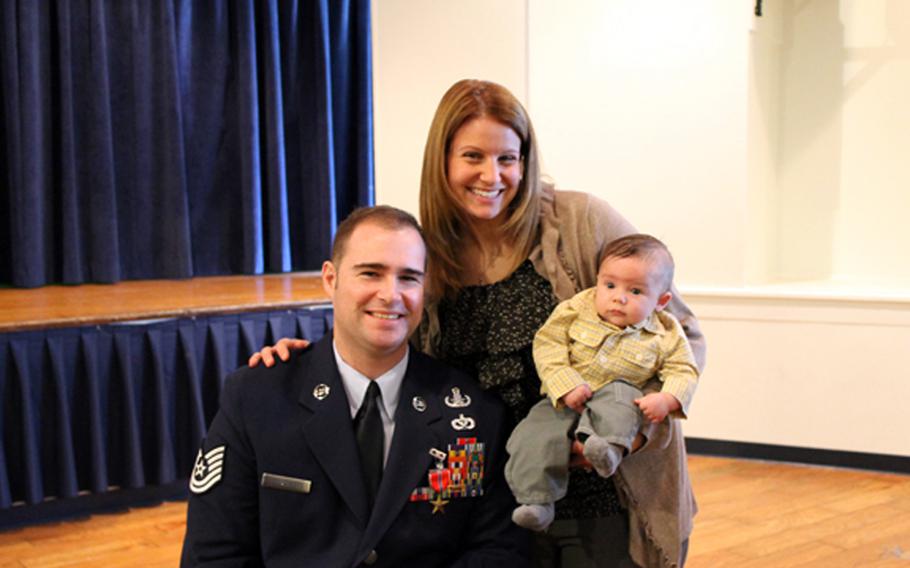 Air Force Tech Sgt. Joseph Deslauriers, left, was awarded the Silver Star at the Pentagon in November for his actions in Afghanistan a year earlier. According to his award citation, Deslauriers dismounted from his armored vehicle in an IED infested area to render safe an improvised explosive device, clear the way to rescue two wounded Marines, and investigate several IED blasts before he stepped on an IED. Here, he poses for a photo with his wife Lisa and their son Cameron. (Courtesy of Deslauriers Family) Joe Deslauriers, seated, a Silver Star recipient, pushes on during the final 1/4 mile of Marine Corps Marathon in Washington, D.C., in October 2012. (Courtesy of Joe Deslauriers)

Air Force Master Sgt. Joe Deslauriers never saw himself as being better than anyone else.

Deslauriers was awarded the Silver Star after losing his left arm and both legs trying to save the lives of fellow servicemembers in a minefield during a tour of Afghanistan in September 2011. He was celebrated as “the most decorated EOD tech in the career field” during the award ceremony at the Pentagon’s Hall of Heroes, a venue reserved for the nation’s most revered servicemembers.

“It feels awkward sometimes being called a hero because you don’t really see yourself as one,” Deslauriers said in February from Walter Reed National Military Medical Center. “The guys I see as heroes are the ones who made the ultimate sacrifice and don’t get to come home and see their families.”

Deslauriers’ courage never wavered. His team discovered, disarmed or detonated a couple of hundred IEDs in Iraq in 2006, and he personally handled 14 to 20 IEDs during his first six-month deployment to Afghanistan in 2008.

He handled so many of the devices, which are the top battlefield killer of U.S. troops, that the incidents run together in his mind. He was able to do his job because he was prepared to die for his country and his brothers, he said.

“We talked about honor, sacrifice and courage,” Deslauriers said as he stood tall on two prostheses at the ceremony, his family sitting before him. “We don’t think about that stuff; we just do what we do, and we love it. I’d do it all over again.”

In May 2011 Deslauriers — then a technical sergeant — deployed to Afghanistan with the 1st Special Operations Civil Engineer Squadron. He was attached to Marines from the 2nd Combat Engineer Battalion and sent to the deadly Sangin district in Helmand province to address a shortfall in EOD techs after several deaths and injuries. His wife, Lisa, was pregnant with their first child.

Deslauriers went out with a 25-vehicle route clearance patrol element, which meant “a lot of driving around at 3 mph through the Afghan desert,” he said. It also meant a lot of IEDs.

The EOD tech would conduct post-blast analysis on IED strikes to assess the damage, collect evidence and try to identify signatures that might lead to the bombers. They had been out for about three weeks when disaster struck on Sept. 23 in the New Zad district.

A vehicle was hit with an IED, and the rescue vehicle sent in to help was also hit. Then a third clearance vehicle was struck.

“We realized there were a lot of IEDs in that area, so what do I do? I get out of my vehicle to investigate,” Deslauriers said.

According to his award citation, Deslauriers dismounted from the safer confines of his mine-resistant armored vehicle, carrying a handheld mine detector. He cleared a path to a disabled vehicle where he provided medical aid to an injured Marine. Then he used his detector to clear a safe path for the medical evacuation helicopter to land. He even helped carry the Marine out of the danger zone.

The airman rendered safe one IED and conducted post-blast analysis on the three other detonations — all within a four-hour time frame, the citation said. He ordered everyone to stay in their armored vehicles until he had cleared a safe area for vehicle recovery personnel.

Almost done clearing the area for a second time, he was about to pick up his gear and head back to the truck when he stepped on a pressure trigger and an IED packed with 15 to 20 pounds of explosives.

Deslauriers said he had walked over the area where the IED was hiding three or four times but had somehow missed it.

“I knew exactly what had happened,” he said. “Everything went black.”

When he came to, a Navy corpsman and several Marines were rushing through a dust cloud to reach him.

He looked down at his mangled left arm, and despite the blood loss and the horror, he continued to pass information about the device that helped his team finish the mission.

“My ears were just rung out,” he said. “I couldn’t hear anything. I felt this numbness all over my body.”

The four first responders would not let Deslauriers look at his legs.

“All I wanted to do was go to sleep,” Deslauriers said. “They kept me talking.”

They also kept him calm during the wait for his evacuation. Deslauriers said it was the longest 15 minutes of his life.

“I didn’t know how long I could hang on,” he recalled. Deslauriers blacked out when he got to the bird.

His actions that day led to the extraction of two wounded Marines and two vehicles and completion of the mission, the citation said.

Over the next five days, Deslauriers went from Afghanistan to Germany to the U.S., having surgeries each stop of the way. He woke up at Walter Reed National Military Medical Center surrounded by his parents and wife.

In the year since, Deslauriers has served as an inspiration. Not only has he relearned to drive, cook dinner, walk the dog and change his young son’s diapers but he has also helped researchers improve prosthetic technology for amputees and has competed in a marathon.

Earning the Silver Star has been “surreal,” he said, and it placed him in elite company, but he can’t wait to go back to work, where he is just another airman in a brotherhood of quiet professionals.

“It seems to me that valor is of the moment — character is built over a lifetime,” Col. Jim Slife, commander of 1st Special Operations Wing, said at Deslauriers’ award ceremony. “The events of the 23rd of September can be described less as a case of spontaneous valor and more as a predictable outcome of circumstance and character intercepting on the battlefield.”