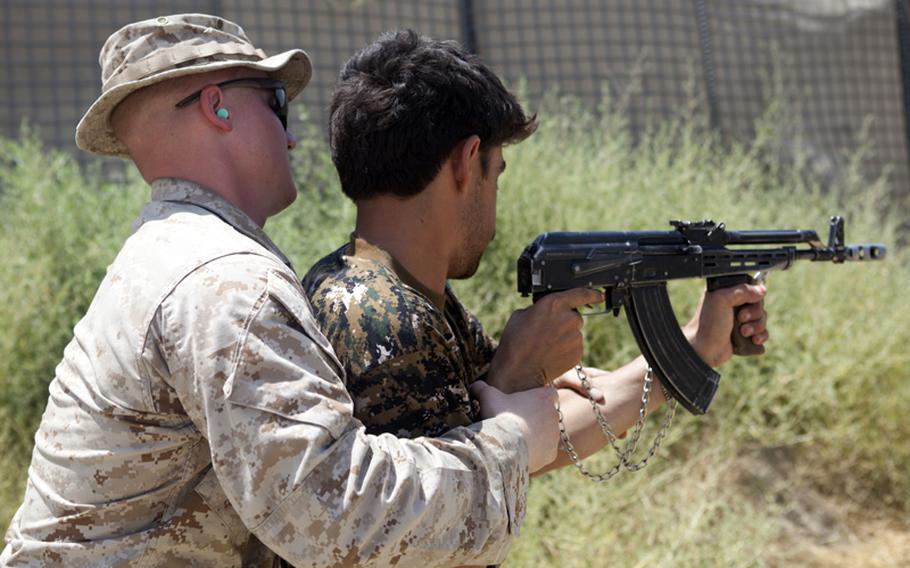 FORT IRWIN, Calif. &mdash; Scrambling to deal with a surge of Afghan soldiers and police who are increasingly turning their weapons on their NATO trainers, military leaders have come up with a new idea for coalition troops: Get closer to the men who might be thinking of killing you.

Leaders are telling troops, who are increasingly finding themselves isolated among the Afghan security forces they are trying to help, &ldquo;that the closer you partner with your Afghan guys&mdash;the better you understand each other&mdash;the safer you&rsquo;re going to be,&rdquo; said Command Sgt. Maj. William Johnson of the International Security Assistance Force Joint Command.

&ldquo;It&rsquo;s the guys having friction [with the Afghans] or who are not partnering as well as [they] should, where I think we&rsquo;re having some of the issues,&rdquo; Johnson said. Thirty-three times this year, Afghan police and soldiers have attacked their American and coalition partners, killing 42 and wounding scores of others. The Pentagon has said the vast majority of the so-called &ldquo;green-on-blue&rdquo; or &ldquo;insider&rdquo; incidents aren&rsquo;t perpetrated by Taliban infiltrators but rather by disgruntled Afghan allies.

So the military is pushing U.S. servicemembers to take keen interest in their Afghan counterparts, getting to know them as much as possible, with the idea that better relationships will allow troops to identify problems before they escalate to violence.

&ldquo;That&rsquo;s the message I&rsquo;m taking to all the training centers,&rdquo; Johnson said at Ft. Irwin last week, during a tour of bases where units prepare for deployment to Afghanistan. The generals leading the war effort sent him and other senior enlisted leaders to ensure that training at those centers emphasized certain lessons learned in Afghanistan, particularly the need to prepare for insider threats.

Yet the push to cultivate closer partnerships with the Afghans comes at the same time the military has ordered units to keep a &ldquo;guardian angel&rdquo; standing by locked and loaded at all times, ready to take down any Afghan attacker if needed. At a shared meal between American and Afghan soldiers, for example, one American won&rsquo;t sit down to break bread but will instead provide overwatch for his unit members.

And just in case the closer embrace doesn&rsquo;t work, Johnson said U.S. troops on remote training assignments in Afghanistan are also building hardened safe areas where they can retreat if necessary. The nightmare scenario: An entire training team comes under attack from Afghans who are supposed to be their allies.

&ldquo;What can we do, say, if we have another Quran burning incident? How would our small group protect themselves?&rdquo; Johnson said. The plan includes having &ldquo;hardened areas that we could literally Alamo until reinforcements arrive,&rdquo; he said. &ldquo;It&rsquo;s something that we&rsquo;ve always thought about, but with the increase in insider threats. &hellip; I think what it&rsquo;s caused us to do is rehearse it.&rdquo;

Pentagon officials caution, however, that a good defense could become offensive. There&rsquo;s a danger, they say, of too broadly labeling the Afghan soldiers and policemen as potential threats.

&ldquo;It&rsquo;s a small number doing this to us; we&rsquo;ve got to be careful we don&rsquo;t alienate our partners,&rdquo; Johnson said.

Servicemembers are being instructed to pay attention to catch the more obvious red flags, such as whether any Afghan troops had a family member killed by the coalition or whether an Afghan soldier went AWOL and then returned. U.S. troops are also urged to remain attuned to more subtle issues like family struggles and tribal loyalties, or even whether a soldier has been able to take any leave. These are issues that commanders say should be discovered through regular conversations that go beyond just tactics and the battlefield.

One officer working as a security adviser in Afghanistan said that since his team is small, he can&rsquo;t be involved with all the Afghans on his base and that he relies on his direct Afghan counterpart, a senior leader, to let him know when there&rsquo;s a possible threat boiling up.

&ldquo;They ask us to stay away for a few hours or days, so that they can remove a threat or for a situation to diminish,&rdquo; the officer said.

Not everyone agrees, however, that the new closer-equals-safer formula will work.

Jacqueline Hazelton, an expert in counterinsurgency and a visiting professor of the University of Rochester, said the theory is based on assumptions that the U.S. and the Afghans share the same goals, that closely partnered NATO forces would be culturally sensitive enough not to enrage their Afghan comrades and that the U.S. military could change sufficiently to do that kind of partnering.

&ldquo;It is not clear that there is a close alignment of interests between the U.S. military and the Afghan security forces,&rdquo; Hazelton said. &ldquo;If these individual Afghans thought that they and the foreign forces were fighting for the same thing, would they be attacking the foreigners?&rdquo;

She added that what&rsquo;s striking about these attacks is how out of the ordinary they are.

&ldquo;Why it&rsquo;s happening is a wide-open question and we have little information so far to go on,&rdquo; she said.

The insider attacks have fractured fundamental trust between Afghan fighters and their NATO trainers at a moment in the 11-year-old war when the mission is becoming even more dependent on such cooperation. As the International Security Assistance Force pushes Afghan forces into the lead in advance of the scheduled withdrawal of U.S. combat troops by the end of 2014, coalition troops are working as advisers and trainers in eight- to 23-man teams that require living closely with much larger groups of Afghans. One of the U.S. servicemembers killed in an insider attack this month was a member of one those vulnerable training teams.

The Army is also reshaping how its teams come together and how those teams are used on the ground in an effort to ensure the most qualified soldiers are part of the mission, and that the teams are protected.

When the Security Force Assistance Teams mission first started earlier this year, the Army brought together volunteers and individual augmentees, forming ad hoc teams of soldiers who hadn&rsquo;t worked together. Johnson said this led to the Americans having to spend time getting to know each other before they could focus on partnering with the Afghans.

Moreover, last spring when training teams deployed, they were dropped into another unit&rsquo;s battlespace, showing up essentially as strangers with their own mission and chain of command -- a situation that created friction.

To change that and keep the training teams more secure and better supported, the Army is going back to a model that was successful in Iraq. The Afghanistan training mission will look similar to the Advise and Assist Brigades deployed in Iraq, but this time they&rsquo;re calling the units &ldquo;Battlespace Integrators,&rdquo; or BSIs. Instead of training teams deploying on their own, the teams will be a part of a brigade&rsquo;s overall mission.

This way, brigades will have ownership of the teams, so it&rsquo;s &ldquo;looking out for your teams versus looking out for a team,&rdquo; Johnson said.

For the second wave of deployments, the teams will be comprised of soldiers who work together, so the learning curve isn&rsquo;t as steep. Army leaders will more carefully select the soldiers who will serve as advisers and mentors, ensuring they pick those who work well with others, don&rsquo;t have a myopic point of view and are capable of being culturally sensitive.

&ldquo;They absolutely need to be the best soldiers,&rdquo; Johnson said, adding that brigades will chose less than a third of their 5,000-member unit to go to Afghanistan.

&ldquo;You&rsquo;re taking a small team and you&rsquo;re really asking them to do something that in some respects can be fairly complex,&rdquo; said Col. Stephen Michael, whose 1st Brigade Combat Team with 10th Mountain Division just finished training at the national training center at Fort Irwin. &ldquo;For teams like these to succeed, half the battle is relationships. It&rsquo;s about how you treat your partners, how you establish contact and rapport. Do you engender trust? So really you have to pick the right people.&rdquo;

One soldier on each of the training teams will be skilled in the local language &ndash; an advantage in keeping an ear out for potential threats.

&ldquo;We know we&rsquo;ll have interpreters, but there&rsquo;s nothing better than having someone who understands our operations and who we have absolute trust in, who can also speak the language,&rdquo; he said.

&ldquo;You gain a lot points when they see you making the effort,&rdquo; he said.

&ldquo;With the whole partnership piece, you really have to go all in. I trust them and they trust me,&rdquo; Michael said. &ldquo;Investing in the relationship -- I really think that&rsquo;s how we protect ourselves.&rdquo;