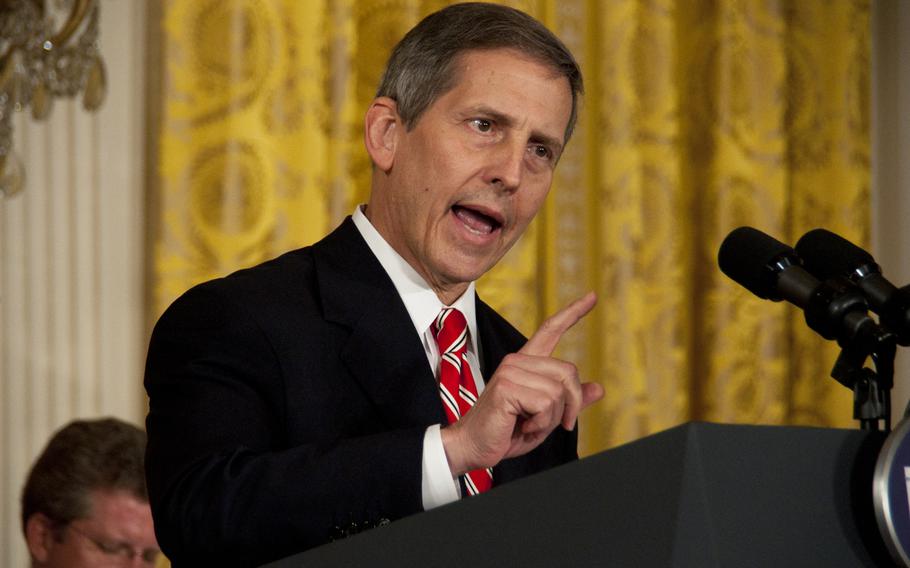 Sloan Gibson, acting secretary of Veterans Affairs, speaks at the White House on June 4, 2014 before first lady Michelle Obama announced a nationwide challenge to local leaders to end veterans homelessness by the end of 2015. (C.J. Lin/Stars and Stripes)

Gibson met with veteran groups and spoke publicly for the first time since taking over from retired Army Gen. Eric Shinseki, who resigned Friday over widespread scheduling abuses at VA hospitals and clinics that have been blamed for 40 veteran deaths in Arizona.

But even as Gibson offered reassurances, new details emerged that VA health care facilities in the Midwest also kept 10 off-the-books waiting lists – with two being acknowledged as a health threat to patients.

A VA inspector general report last week found the potentially dangerous patient scheduling abuses were systemic in the department but only listed specific problems at the Phoenix VA hospital, where patients were never added to official wait lists as a way to conceal treatment delays of up to several months.

“As the president has directed, we are moving immediately to get veterans off of wait lists and into clinics, and we are taking action to fix the systemic problems that allowed these unacceptable waits to occur,” Gibson said during a White House event Wednesday.

Some of the 1,700 veterans in the IG report declined to provide contact information or were duplicate entries. According to a VA release, Gibson told the groups that by Friday the VA had called the 1,586 veterans the IG found on off-the-books waiting lists kept by staff in Phoenix.

“VA identified that roughly 725 veterans of the 1,700 identified by the [inspector general] wanted care within 30 days,” according to the department.

The initial IG report, part of a larger audit of the Phoenix deaths and the VA’s nationwide health care system, found that staff used strategies to make it appear facilities were meeting a VA requirement that veterans receive care within 14 days of their requested schedule date. The wait times were used in employee performance evaluations and related to awards and pay bonuses.

A full report is expected to be completed in August.

Before resigning, Shinseki called the department’s deep problems “indefensible,” saying that level of wrongdoing was something he had rarely seen during his 38 years of military service. Gibson was the VA’s No. 2 at the time and was tapped as the acting secretary while the White House searches for a permanent replacement.

For now, Gibson is responsible for fixing the nation’s largest integrated health care system, which serves 6.5 million vets per year – a system plagued with patient and benefits backlogs for years.

New details of wrongdoing and dysfunction were revealed this week in a letter from a VA medical center director to two U.S. senators who represent Kansas.

Ten unauthorized patient wait lists, similar to the lists in Phoenix, were used in the VA Heartland Network, a regional hospital system that serves veterans in Kansas, Missouri, and parts of Illinois, Indiana, Kentucky and Arkansas, according to a copy of the letter sent to Sens. Pat Roberts and Jerry Moran.

“The medical centers involved terminated the practice, corrected the gaps in access, and investigations for accountability are ongoing,” Vazquez wrote.

Also, the hospital network found 96 veterans who had been waiting over 90 days for care at seven medical centers, according to the letter written May 30.

“Medical centers in VA Heartland Network will be calling the 96 veterans this week to schedule appropriate access to primary care,” he wrote.