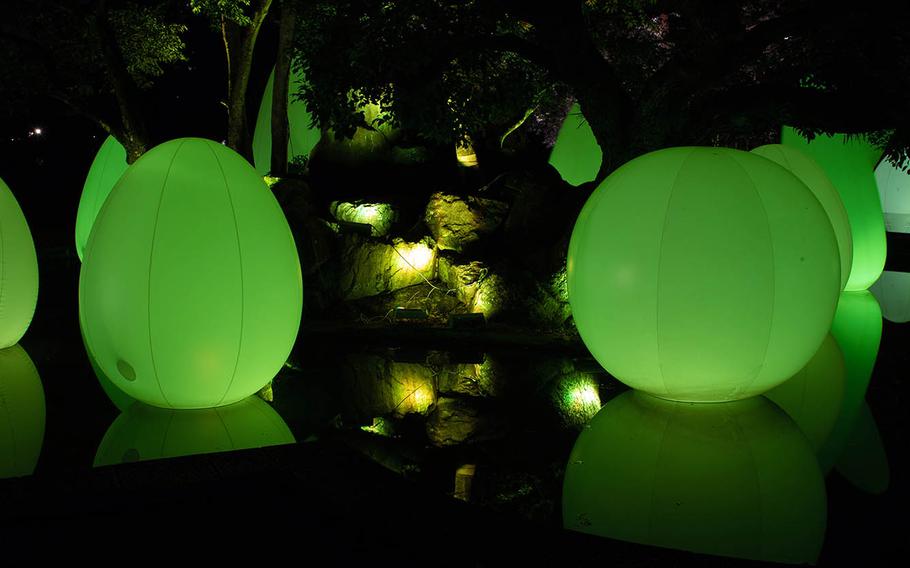 Buy Photo
Colored eggs, or ovoids, reflect a brilliant green onto the surface of a small pool Feb. 27 near Hiroshima Castle, Japan. (James Bolinger/Stars and Stripes)

Buy Photo
Colored eggs, or ovoids, reflect a brilliant green onto the surface of a small pool Feb. 27 near Hiroshima Castle, Japan. (James Bolinger/Stars and Stripes) 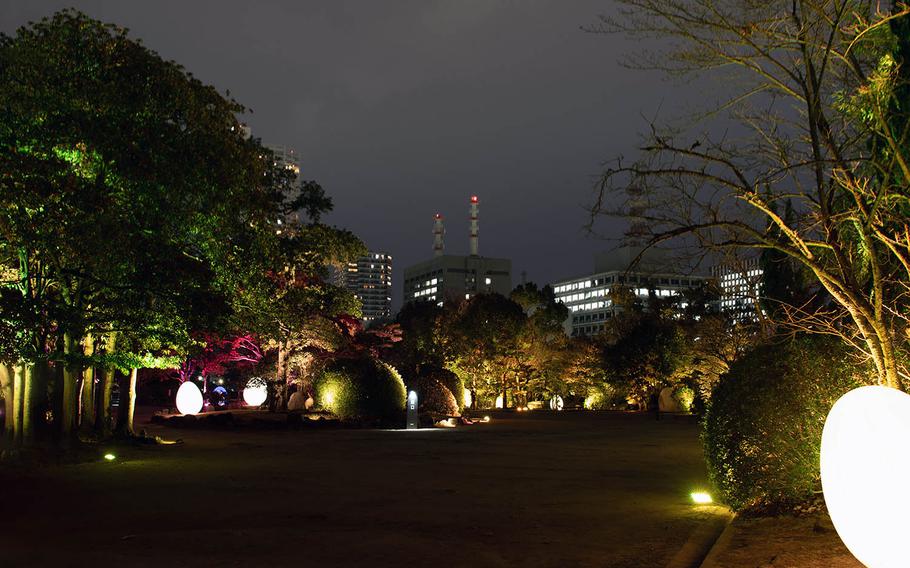 Buy Photo
Hiroshima Castle, in Japan, glows in the dark Feb. 27 during an art show commemorating the 400th anniversary of the Asano clan taking ownership of the castle and surrounding lands. (James Bolinger/Stars and Stripes) It takes only one touch to send waves of colored light sweeping across the ground in front of Hiroshima Castle. The walled garden in front of the 430-year-old structure has been turned into a glowing, interactive, nighttime wonderland honoring 400 years since the Asano Clan made Hiroshima its home.

Built in 1589, the structure is considered one of Japan’s top flatland castles. The art display — called the Digitized Hiroshima Castle — is a celebration of Nagaakira Asano, the first of the Hiroshima daimyo, or feudal lords, taking control of the castle in 1619.

His family maintained the castle for 12 generations, approximately 250 years, before the castle and surrounding lands were returned to the emperor in 1869.

TeamLab is an interdisciplinary group of specialists that seeks to navigate the confluence of art, science, technology, design and the natural world.

The grounds surrounding the castle have been decorated with giant glowing eggs, called ovoids by the event designers. Some are more than 10 feet tall and change color and omit a sound unique to the new color as they are touched.

That triggers the surrounding eggs to match the new color and tone, which spreads throughout the landscape. The result is a breathtaking visual and auditory experience where art and audience interaction collide.

Additionally, the castle, which stands on a hill and towers over the surrounding trees, is bathed in ever-changing light.

The nighttime skyline filled with Hiroshima’s skyscrapers is visible above the trees from the center of the display.

It’s an excellent opportunity to take some low-light photos with lots of color. However, flash photography and tripods/monopods are prohibited because they can interfere with others guests’ enjoyment of the park.

Adults also can learn about the history of Japan’s warring period between the 15th and 16th centuries, and the creation of Hiroshima Castle, while their children color a likeness of a famous general from Hiroshima. There are five generals to choose from, and each drawing is digitized after it is completed.

The animated likenesses are then projected onto a large, interactive wall outside the coloring tent. As children touch each figure, a speech bubble appears containing a famous quote spoken by that military officer.

The walk through the park is on nature trails, and the event organizers recommend that guests wear close-toed shoes.

Digitized Hiroshima CastleDIRECTIONS: About a 20-minute walk from Hiroshima Station. A map can be obtained from the tourist desk outside the station.TIMES: Open daily, 6:30 p.m. to 9:30 p.m. Last entry at 9 p.m.COSTS: 1,000 yen (about $8.95) for adults and 650 yen for childrenFOOD: Food truck near the entrance serves hot chocolate and tea for 150 to 200 yen.INFORMATION: Online: teamlab.art/e/hiroshima