Innsbruck, founded by a Holy Roman Emperor, has something for everyone 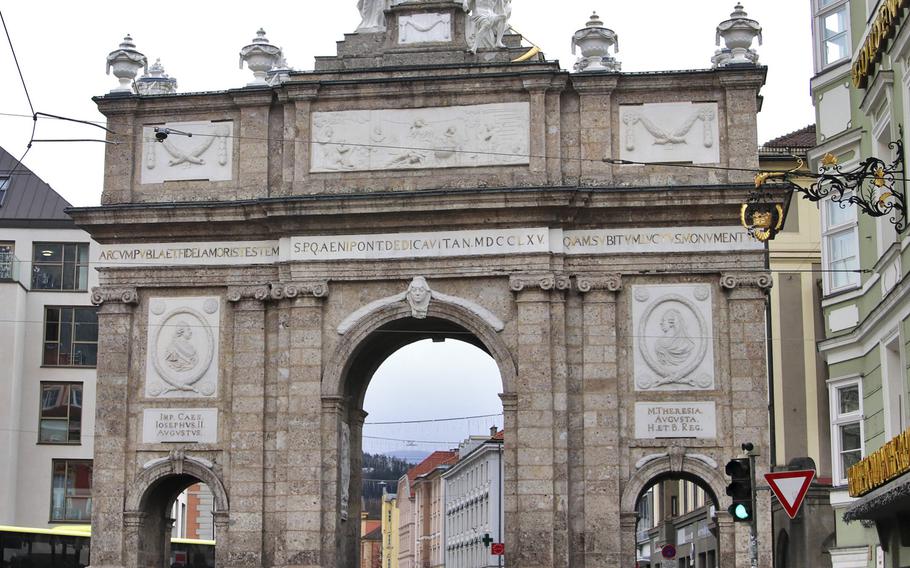 Buy Photo
Innsbruck's Triumphforte, or victory arch, is located in the southeastern part of the city center. Whatever it lacks in size, it makes up for in architectural details. (Norman Llamas/Stars and Stripes)

Buy Photo
Innsbruck's Triumphforte, or victory arch, is located in the southeastern part of the city center. Whatever it lacks in size, it makes up for in architectural details. (Norman Llamas/Stars and Stripes) 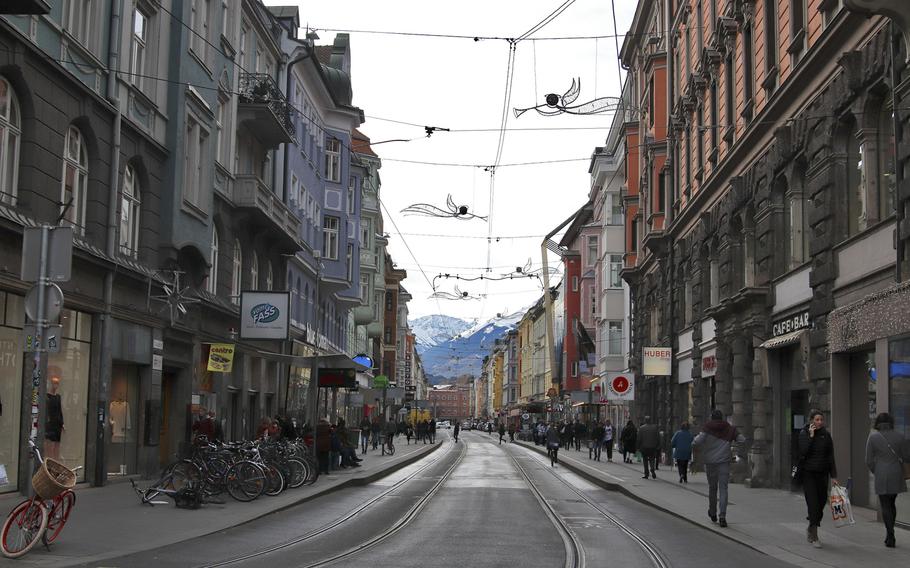 Buy Photo
A street view of Innsbruck's colorful city center. No matter which way you look, you will see mountains in the distance as the city is surrounded by the Alps. (Norman Llamas/Stars and Stripes) 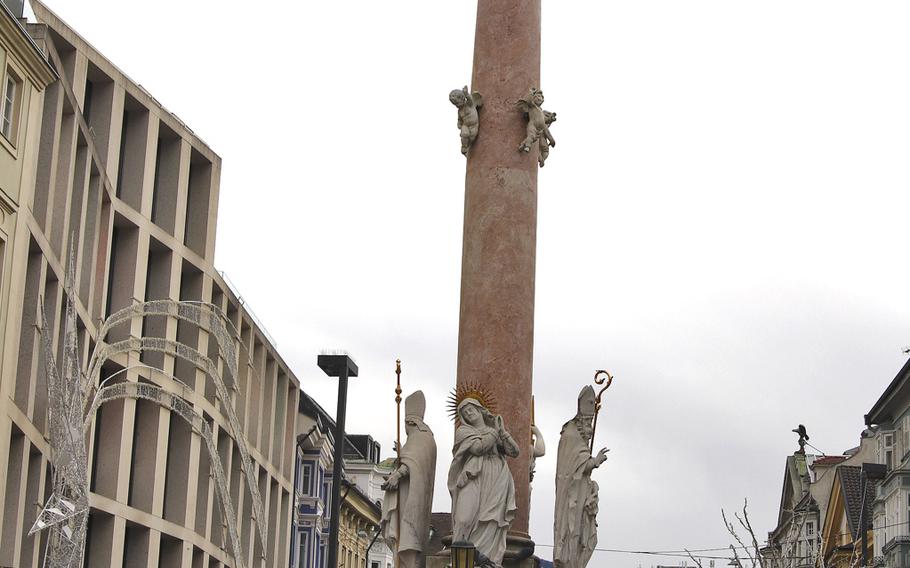 Buy Photo
St. Anne's Column, located in Innsbruck's city center, is made of red marble and topped by a statue of the Virgin Mary. (Norman Llamas/Stars and Stripes) 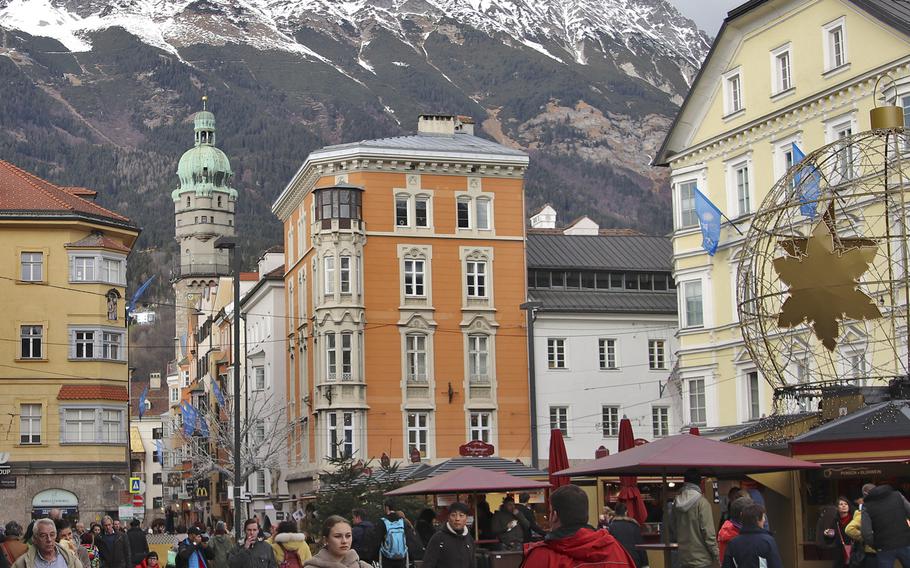 Buy Photo
Some of Innsbruck's beautiful, colorful and detailed buildings are is said to date from the 1500s, when Maximilian I was the Holy Roman Emperor. (Norman Llamas/Stars and Stripes) 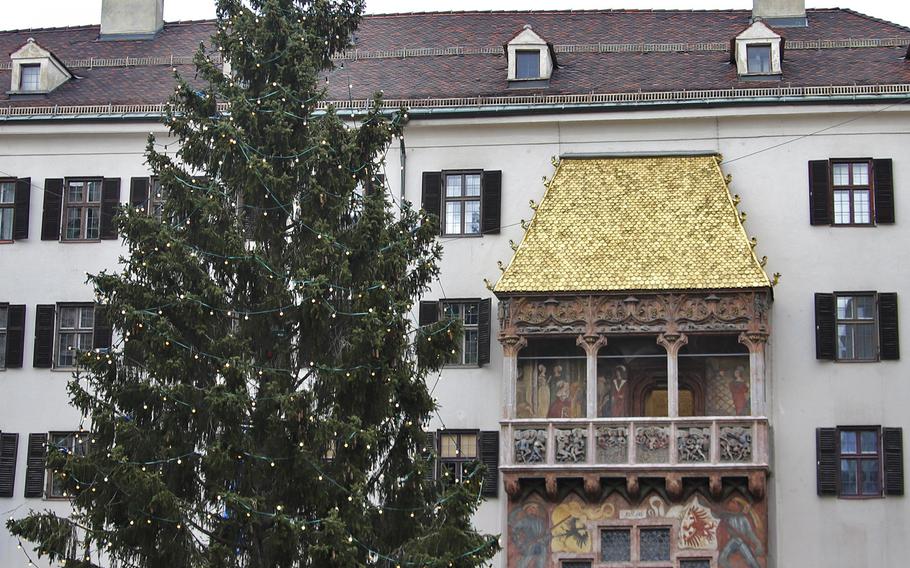 Buy Photo
The Golden Roof, located in Innsbruck's city center, is a canopy entirely built of golden shingles that is believed to have been built by Emperor Maximilian I. He is said to have sat under the golden canopy and watched the festivities celebrating his assumption of rule over Tyrol, around 1490. (Norman Llamas/Stars and Stripes) 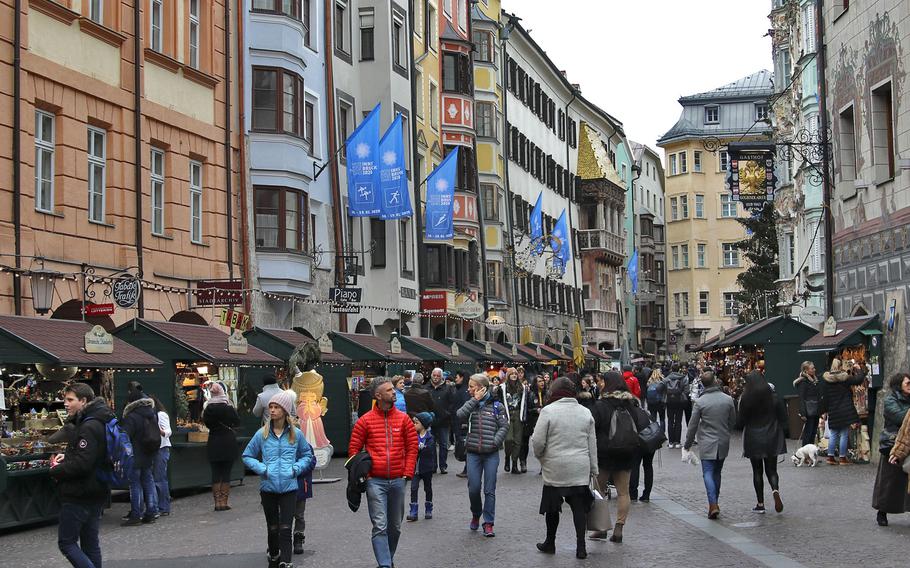 Buy Photo
Innsbruck's bustling city center with Christmas markets in full swing. The colorful city is located in a valley that's completely surrounded by the Alps. (Norman Llamas/Stars and Stripes) 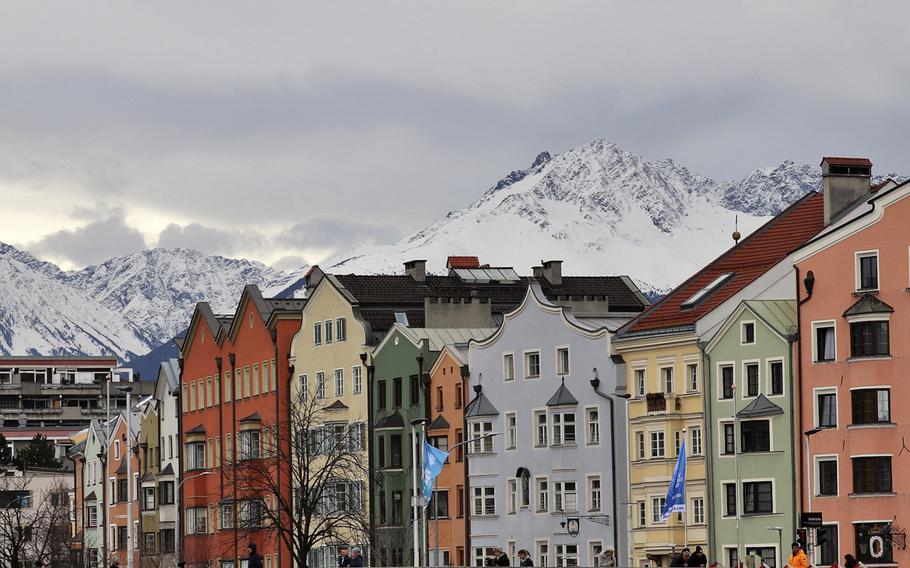 Buy Photo
A view of the beautiful and colorful Innsbruck city buildings along the River Inn, with the magestic Alps complementing the view. (Norman Llamas/Stars and Stripes) 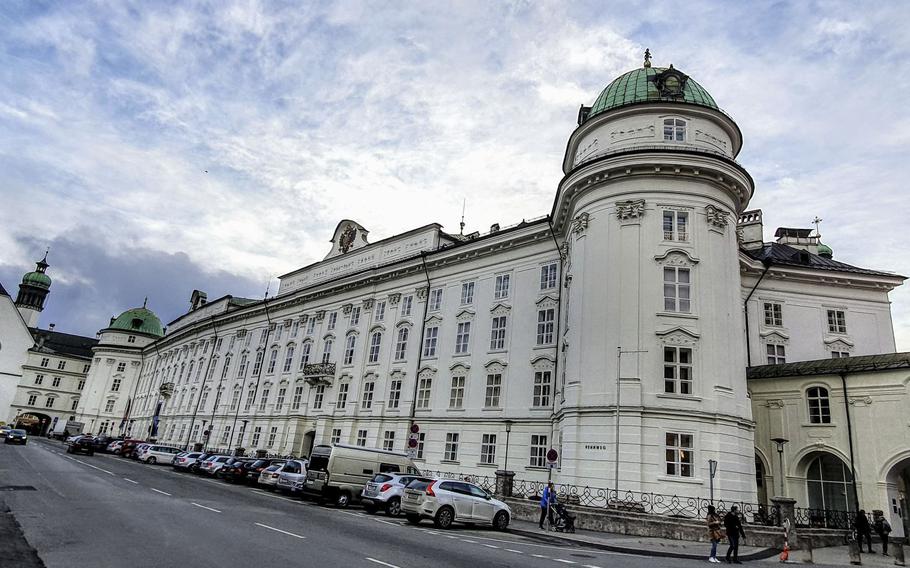 Buy Photo
The Royal Palace, or Hofburg, of Innsbruck is a former Habsburg palace and considered one of the three most significant cultural buildings in Austria, along with the Hofburg and Schoenbrunn palaces, both in Vienna. (Norman Llamas/Stars and Stripes) Buy Photo
The Hofkirche mit Silberner Kapelle, is a Catholic church adjacent to the Hofburg in Innsbruck. In this church you will find the tombs of Emperor Maximilian I (with larger than life iron statues of family members and friends of Maximilian I) and Archduke Ferdinand, whose assassination in 1914 triggered World Was I. (Norman Llamas/Stars and Stripes)

Just before Christmas this year, my family and I visited Innsbruck in Austria. Located around 180 miles, or four hours by car, from Aviano, Innsbruck is not only surrounded by the majestic Alps and all they have to offer, but is also home to the Swarovski crystal company and has some great Christmas markets.

We made our way around town on foot, walking along the River Inn or through the Old Town to wherever our curiosity took us.

Our wanderings took us to a giant, illuminated Christmas tree decorated with Swarovski crystal, and set in the middle of one of many Christmas markets around the city. The next day, we visited the Old Town, a densely populated area full of colorful buildings that house a variety of modern and antiques shops. The area is believed to have been built by Maximilian I, the Holy Roman Emperor from 1508-1519.

When we were there, four Christmas markets were set up in the Old Town. In one, we tried Kiachln, a hot donut-like fried bread served with warm sauerkraut and Almdudler, a soda made with alpine herbs, and browsed the many shops and stands for artisanal knick-knacks, some from as far afield as Ukraine and Ecuador.

In addition to shopping and dining, there are many beautiful and historic churches and museums to explore in Innsbruck. I realy enjoyed visiting the Hofkirche mit Silberner Kapelle, a Catholic church adjacent to the royal palace. In this church are the tombs of Emperor Maximilian I (with larger-than-life iron statues of family members and friends of Maximilian) and Archduke Ferdinand, whose assassination in Sarajevo in 1914 triggered World War I.

There’s also a museum inside the church where you can see artifacts from the Maximilian I era. If you buy the church and museum ticket option, you can climb up the tower for an amazing view of the city and the mountain ranges.

Other must-sees in the Old Town are the Hospital Church of the Holy Spirit — a marvelous pink building with an even more astonishing interior — and the Triumphforte, Innsbruck’s small victory arch with its impressive architecture. There’s also the Golden Roof, a canopy built entirely of golden shingles, and the Hofburg, or royal palace, which is considered one of the three most significant cultural buildings in the country, along with the Hofburg Palace and Schoenbrunn Palace, both located in Vienna.

No matter what you like exploring while on vacation, Innsbruck has something for everyone and that really impressed us.

DIRECTIONS: If you live in Germany, several airlines have direct flights from Frankfurt to Innsbruck. You’re there in an hour.

Driving: When you get to Austria, or at a service station on the way, pick up a toll pass, called a vignette. We chose the 10-day vignette for 10 euros. A two-month vignette would have run us 30 euros. Failure to buy a vignette if you plan to use the Austrian highways, which you probably will, can result in a spot fine of at least 120 euros.