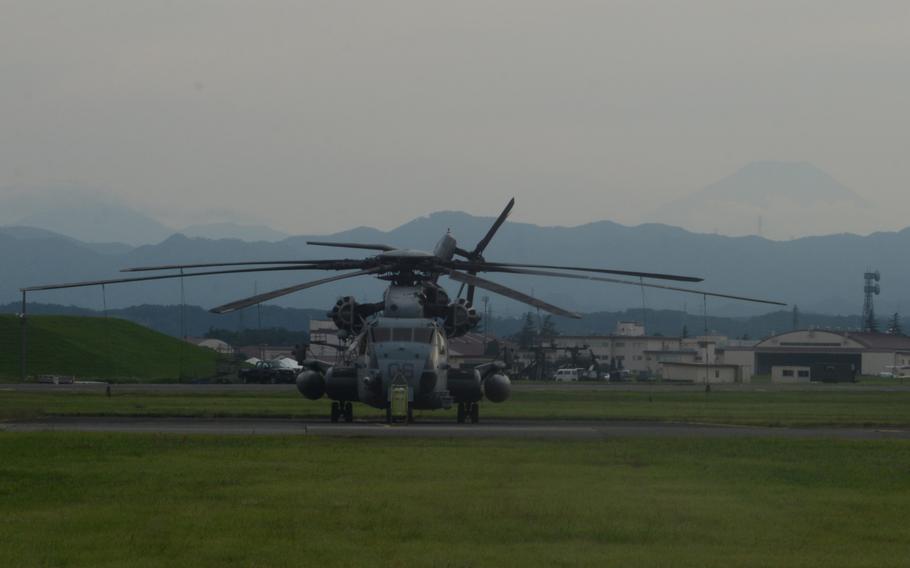 The incident occurred at about 5:20 p.m. in the Takae district of Higashi Village during routine training, local and Marine Corps officials said. Japanese officials first reported it as a "crash."

There were no injuries to the crew or civilians in the area, said a Marine Corps statement issued late Wednesday. The cause of the fire and the extent of the damage to the aircraft is unknown.

"The cause of this incident is under investigation and there is limited information at this time," the Marine statement said. "We are currently working with local and military police to secure the site for follow on investigation and everyone's safety. Additional details will be released when information is available."

Local officials from the Kunigami District Civil Service Union Fire Department said they were alerted to the incident at a rural farm at about 5:30 p.m., a spokesman said. They began to work toward extinguishing the blaze at 6:12 p.m. Firefighting was handed over to the U.S. military at about 8:10 p.m., and the fire was "suppressed" at about 8:17 p.m.

Such incidents are known to enflame tensions with locals who remain wary of U.S. military flight operations on and around the tiny island prefecture. Immediately after World War II, crashes were fairly common and claimed the lives of local civilians. Along with crimes perpetrated by American servicemembers in recent years, the incidents have led to a small but potent protest movement backed by popular support.

The protesters and anti-base Gov. Takeshi Onaga have vowed to expel the MV-22 Osprey tilt-rotor aircraft from the island.

An Osprey crash last December in shallow water just off Camp Schwab showed just how sensitive locals are to U.S. military flight operations. The crash, which happened during a nighttime refueling at sea, enflamed protests and renewed calls for Ospreys to be expelled from the island.

A deadly Osprey crash in August off the coast of Australia only added fuel to the fire; however, the helicopter-plane hybrid was deemed safe and continued to fly.

Speaking to reporters in Naha on Wednesday evening, Onaga condemned Wednesday’s incident and called for a suspension of Super Stallion flights pending an investigation.

“I am outraged that a similar incident has occurred once again in this prefecture less than a year after the [Osprey] crash in Nago City," he said. "I strongly protest and at the same time [request a] thorough investigation to the cause of the incident and that it is promptly announced."

Japanese Defense Minister Itsunori Onodera told reporters that Lt. Gen. Lawrence Nicholson, III Marine Expeditionary Force commander, has been asked to “identify the cause of the incident and take preventative measures and provide sufficient information regarding the case.”