In the woods near Ramstein, you can feed the deer and grab a pizza 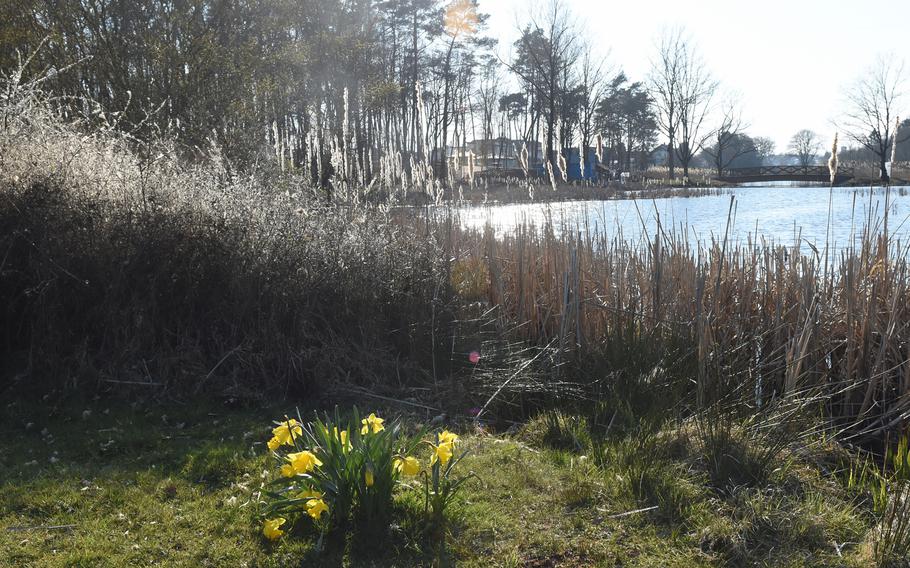 Buy Photo
The Seewoog, a small lake on the outskirts of Ramstein-Miesenbach, Germany, is a good starting point for hiking and biking in the countryside outside of Kaiserslautern. (Jennifer H. Svan/Stars and Stripes)

Buy Photo
The Seewoog, a small lake on the outskirts of Ramstein-Miesenbach, Germany, is a good starting point for hiking and biking in the countryside outside of Kaiserslautern. (Jennifer H. Svan/Stars and Stripes) 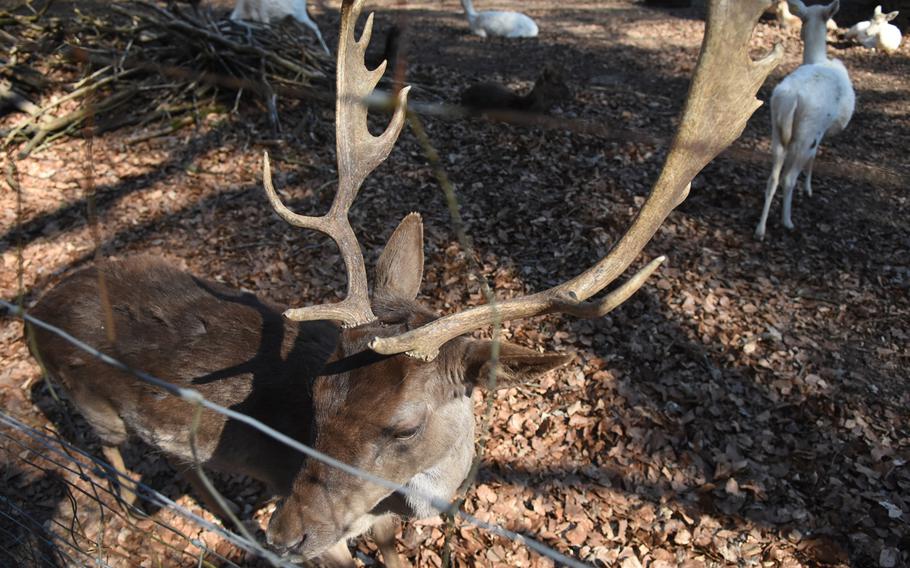 Buy Photo
This buck in a small reserve in the woods between the Seewoog in Ramstein-Miesenbach and the village of Mackenbach was not shy and came right up to the fence. (Jennifer H. Svan/Stars and Stripes) 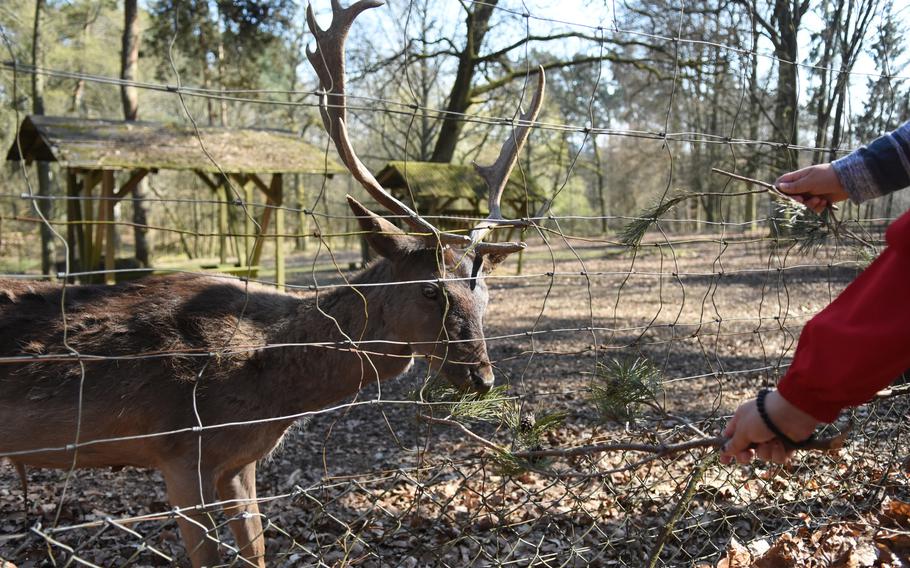 Buy Photo
A deer in a small reserve in the woods between the Seewoog in Ramstein-Miesenbach and the village of Mackenbach nibbles on a snack of pine needles offered through the fence. (Jennifer H. Svan/Stars and Stripes) 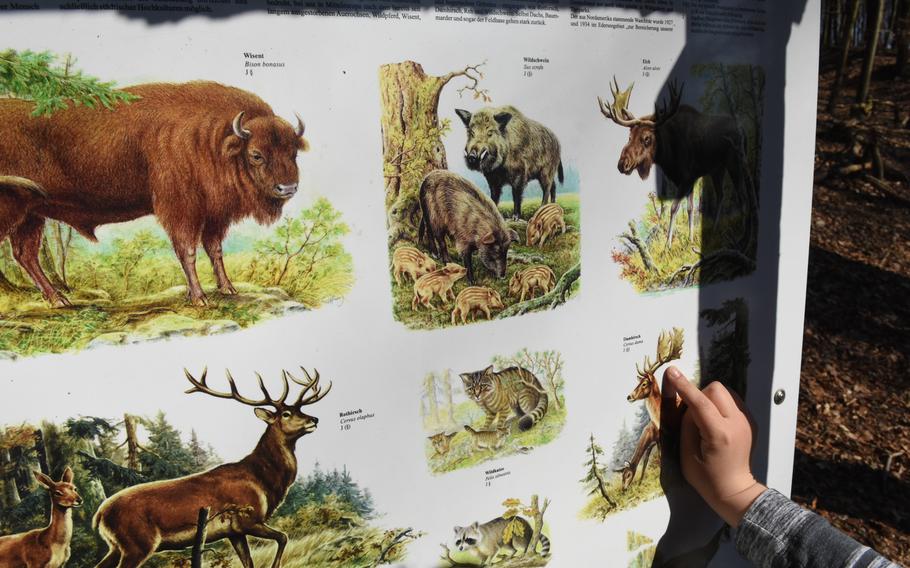 Buy Photo
This sign in the woods behind the Seewoog lake in Ramstein-Miesenbach shows animals that can be found in Germany, either in the wild or in parks or zoos. (Jennifer H. Svan/Stars and Stripes) 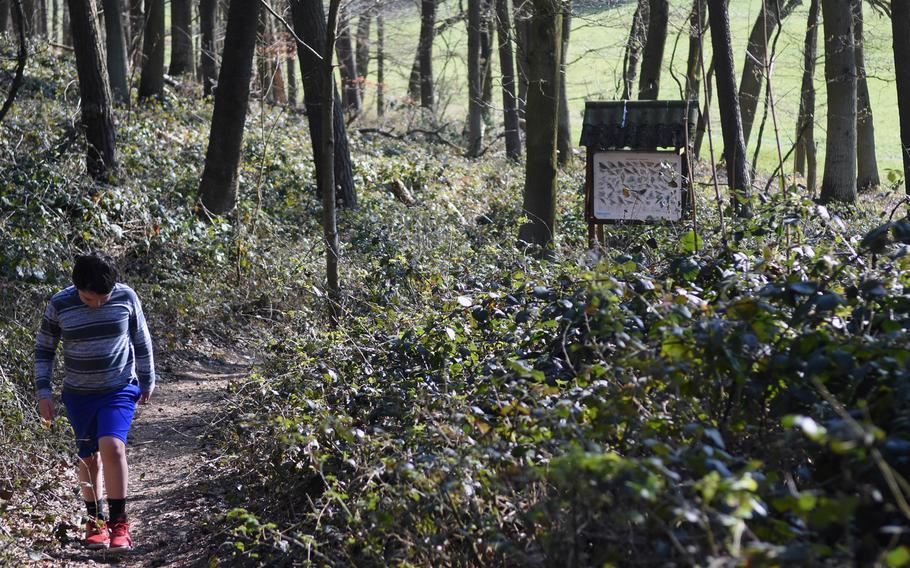 Buy Photo
A trail traverses the woods behind the Seewoog in Ramstein-Miesenbach, Germany. The path is an easy loop starting and ending at the Seewoog. (Jennifer H. Svan/Stars and Stripes) 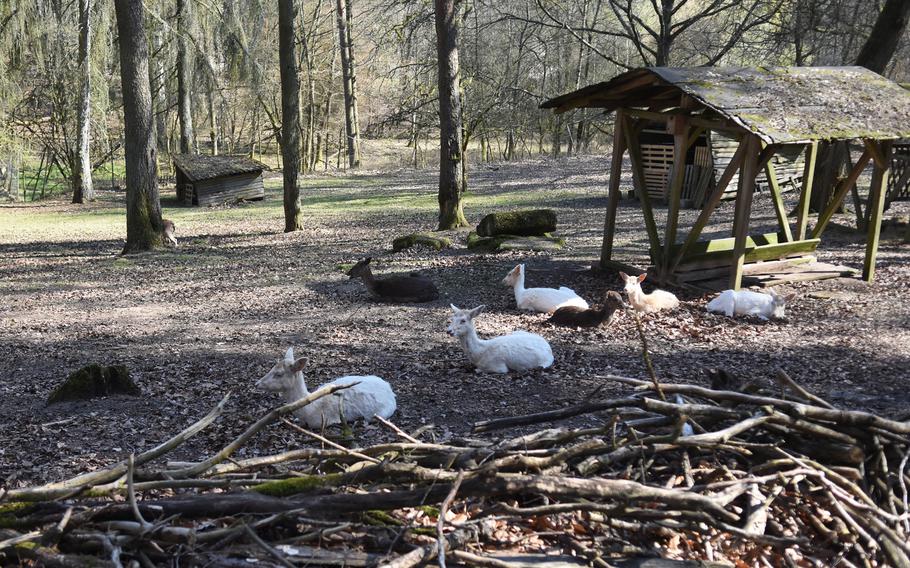 Buy Photo
A hike through the woods between the Seewoog in Ramstein-Miesenbach and Mackenbach village in Germany leads past a small enclosure with deer. (Jennifer H. Svan/Stars and Stripes)

But coronavirus restrictions on Defense Department personnel in Germany limit the distance you can go in pursuit of outdoor adventure to less than a 20-mile radius from your home.

If you live in Rheinland-Pfalz, that’s not a problem. The Kaiserslautern area has countless trails to explore, from those crisscrossing the low mountains of the Palatinate Forest south of the city to the open farmland and meadows to the west, near Ramstein Air Base.

For the past few weeks, my kids and I have been keeping stir-craziness at bay by venturing out on hikes.

Recently, we discovered something new while making our way down a favorite trail near the Seewoog, a small lake near Ramstein-Miesenbach.

Walking northeast toward Mackenbach, we followed a dirt path that crosses a meadow and leads into the woods. Right before the trail makes a long uphill climb, we took a path to the left and found something unexpected: Deer that live in an enclosed meadow in what looks to be a small animal reserve.

There were more than a half-dozen deer, grazing and sitting in the dirt. Some were completely white, and one had antlers. A deer harem, perhaps?

Most of the animals paid us little heed, either napping with half-shut eyes or nipping at an itch on their hindquarters. They didn’t even flinch when we called to them — except for the one with the antlers.

He immediately sauntered over to us, getting so close we could reach through the gaps in the wire fence and gently touch his rack.

My kids found a few tufts of green grass and some pine-needle branches to poke through the fence. He ate the grass and pine needles and brushed his antlers against the branches. Whichever direction we went along the fence line, the buck followed.

The interaction was a nice diversion from being cooped up at home. After circling around the deer reserve, we headed back toward the Seewoog and explored another trail, this one in the direction of Kusel.

We covered about five miles but with more time, or a bicycle, we could have done a lot more. The trail from the Seewoog to Kusel is nearly 17 miles, and to Weilerbach, it’s just over four miles. We saw serious hikers walking briskly with trekking poles, and people on bikes, walking their dogs or riding horses. Social distancing was hard at times, but we did our best to give everyone a wide berth.

In non-pandemic times, the children’s playground by the lake is open, as is an Imbiss that sells hot food and drinks in winter and ice cream in the summer. But in these times of the virus and social distancing, they’re closed.

The nearby Seewoog pizzeria is still open for takeout, though, so we picked up two brick-oven pizzas and headed home.

DIRECTIONS: Seewoog lake is on the outskirts of Ramstein-Miesenbach, across the street from the Seewoog pizzeria restaurant. The address is Waldstrasse 43, 66877 Ramstein-Miesenbach. It’s less than a 10-minute drive from the west gate of Ramstein Air Base. The deer reserve is about a 10- to 15-minute walk from the Seewoog parking lot, walking on the trail toward Mackenbach into the woods.

FOOD: The kiosk next to the lake is currently closed, but the pizzeria across the street is open for takeout.